Home / Design / A Peek Inside College Dorms Around the World

A Peek Inside College Dorms Around the World 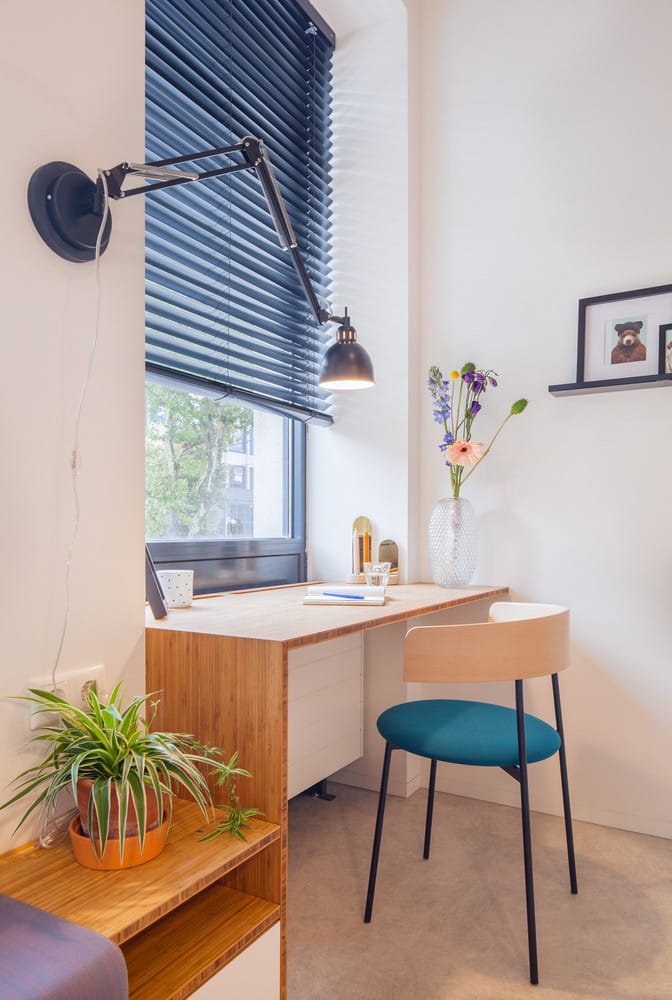 Back-to-school season is officially upon us. With more dorm-approved decor readily available now more than ever (think, removable wallpaper, tiered storage trolleys, and stylish floating shelves), tweaking your tiny, temporary space to work for you is finally a feasible undertaking. Okay, so, you might not be able to change the fact that your cinder block walls are squashing your gallery dreams or that your twin bed isn’t as “XL” as you’d imagined, but that’s no reason to lose hope. As you begin to deck out your new space, it’s only natural to feel curious about how other students are living and decorating. And what better place source ideas than from abroad?

While we’re accustomed to university-owned residences in the States, in bigger cities across Europe, Australia, South America, and Asia, communal student housing and hostels are increasingly becoming the norm. With a heavy focus on style, these hubs feel a whole lot less like mildew-ridden jail cells, and a lot more like luxe hotel suites. And it’s not just the architecture or the chic bones of the rooms that have blown us away, but also how their creative inhabitants have taken to decorating their dwellings.

From colorful compact cubes in the Netherlands to ultra-luxe studios in London, ahead, we share a few of the world’s most impressive college dorms. Plus, a few stellar small space decor tips you’ll want to steal for yourself. 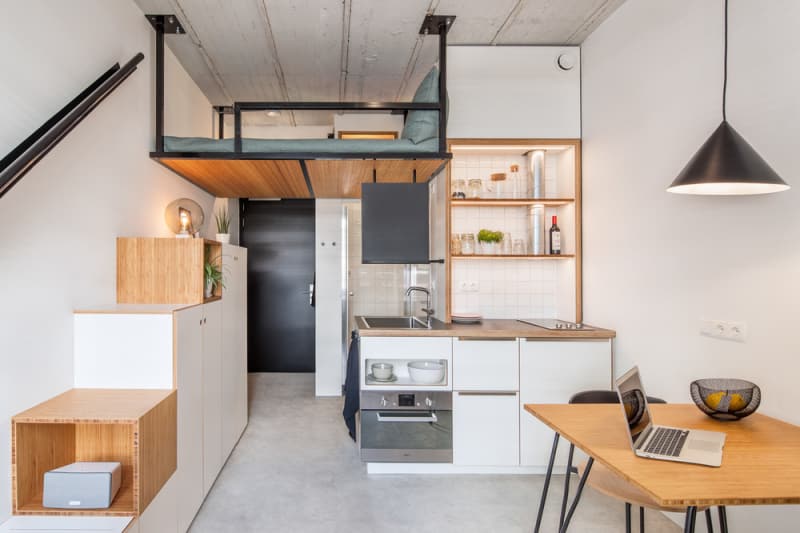 Now, this is compact living at its finest. Just this past year, Amsterdam-based design firm Standard Studio debuted 218 modern student housing units (each around 200 square feet!) as a part of a new development project in the city of Rotterdam dubbed the “Student Hotel.” At first glance, it becomes quite obvious that theses multi-functional spaces boast a number of ultra-efficient features, including a suspended double bed, a kitchen-bathroom combo, and stairs that double as a cabinet system. Flooded with natural wood tones, clean lines, and plenty of sunshine, this contemporary dwelling would certainly make studying seem like less of a chore.

Everyone knows that you’re bound to feel a little homesick during your first few months at university. That’s why the first thing every college-goer does when they set up camp is personalize their space by hanging photos. Although there’s nothing wrong with your standard framed display, we’re big fans of this not-so-ordinary approach. A true lesson in getting creative with what limited wall space you have, this Madrid-based student opted for an all-over, abstract look—hanging personal photographs, art, and other mementos from a series of entangled wires. Consider this a reminder that there really are no rules when it comes to making your once-boring room feel like home.

Nestled in the heart of Lisbon, the Collegiate Marquês de Pombal, an exquisitely designed, luxury student complex, is a thing of dreams. A swimming pool and sauna, beautiful lobby with hanging greenery, and 24/7 concierge are just a few bonus amenities that come included when you rent one of their state-of-the-art suites. Though the rooms range from “standard” to “superior plus,” even the most basic of the apartments boast the same industrial-rustic aesthetic.

When NYC-based property developer Macro Sea was tasked with designing new residences alongside CIEE, a nonprofit study abroad an intercultural exchange organization, they went into the project prepared to reject dormitory norms. Basing their creations on the belief that student quarters are often bland, cramped, and visually uninteresting, their team transformed what used to be an old factory in the Kreuzberg area of Berlin into an inspiring work-live space that now goes by the name of the G.27 Global Institute. Outfitted with clever cubbies, mounted storage boxes, and lofted beds, each minimalist-approved dorm was crafted for ultimate efficiency.

Seeing that colleges are often breeding grounds for illnesses, one of the most important things you can do during your four (or three) years is to stay as healthy as possible. Scape, a vibrant chain of student accommodations scattered throughout the city of London, offers dorm rooms that promote just that. Here, every student’s room comes with a double bed and their own heat controls (so they can sleep easy at night), smartly hidden storage, and a private kitchenette and shower. In addition to placing an emphasis on art, culture, and color, privacy and self-care also come first. 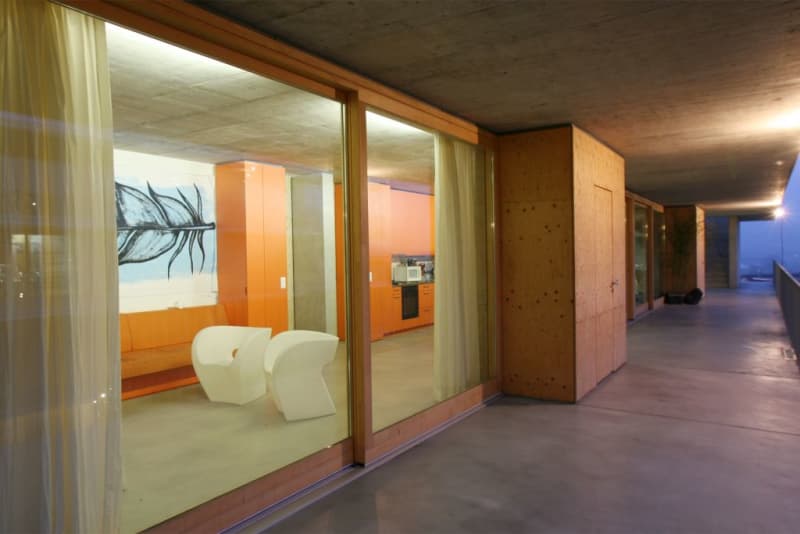 Consisting of two rectangular concrete buildings separated by a garden, Casa dell’Accademia, a residential complex for the architecture school at University of Lugano, is a true modern marvel. Not unlike the exterior, the interior of the dorms is geared toward contemporary minimalism and materiality (plywood walls and loud bursts of orange play a major role in the design). It’s hard to imagine that the future architects who get to call this inspiring stay home would ever fall short on ideas. 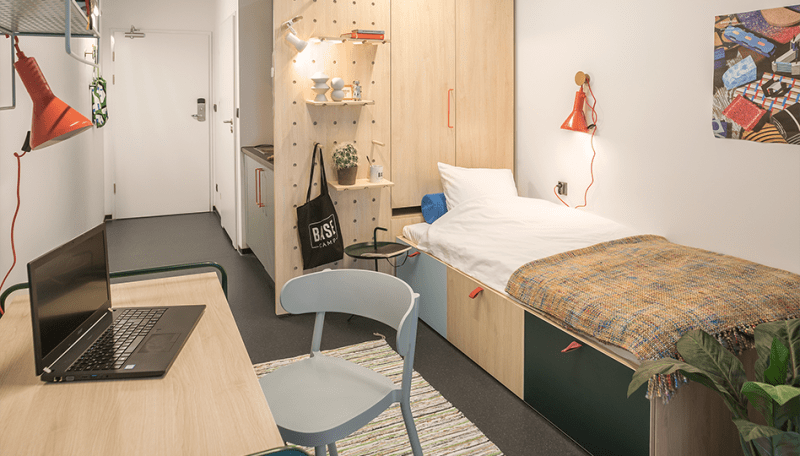 Situated in what was once an old printing house, BaseCamp Lodz turned the former industrial structure into a color-charged haven for students attending the local university. The millennial-approved suites boast a refreshing mix of hues (think, forest greens, rusty oranges, and muted blues), floating shelves, graphic bathroom tiles, and Scandinavian-inspired furnishings. Warning: A dorm room as cool as this only makes it that much more tempting to skip class and hang out in bed all day. 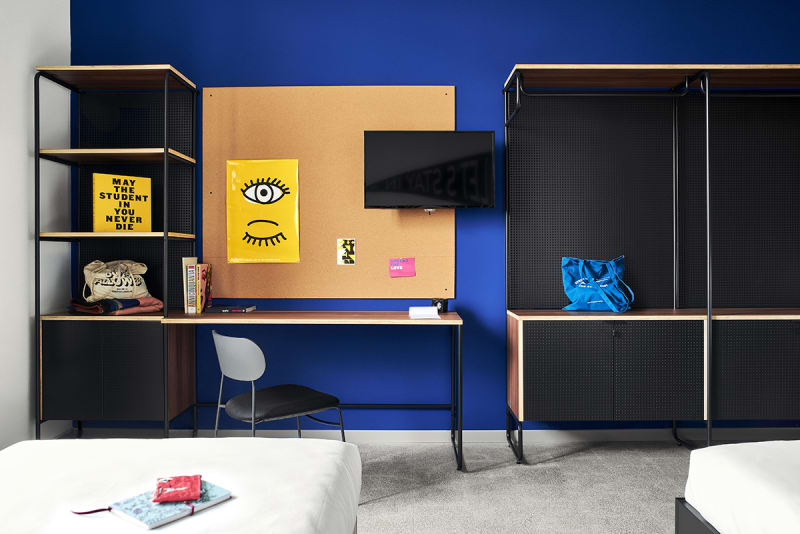 COURTESY OF THE STUDENT HOTEL

This dreamy cobalt blue suite at The Student Hotel in Florence has us wishing all dorm rooms came with bold accent walls. Aimed at offering a colorful, productive experience for the studious at heart, each room comes with a generous work zone primed for productivity. With plenty of space to spread out for a short mid-study snooze come 2:00 a.m., it’s safe to guess your teeny U.S. dorm desk has nothing on this built-in beauty. That said, one could easily recreate this study-ready scene with a touch of removable wallpaper, a clever standing shelving unit, and a large cork board. 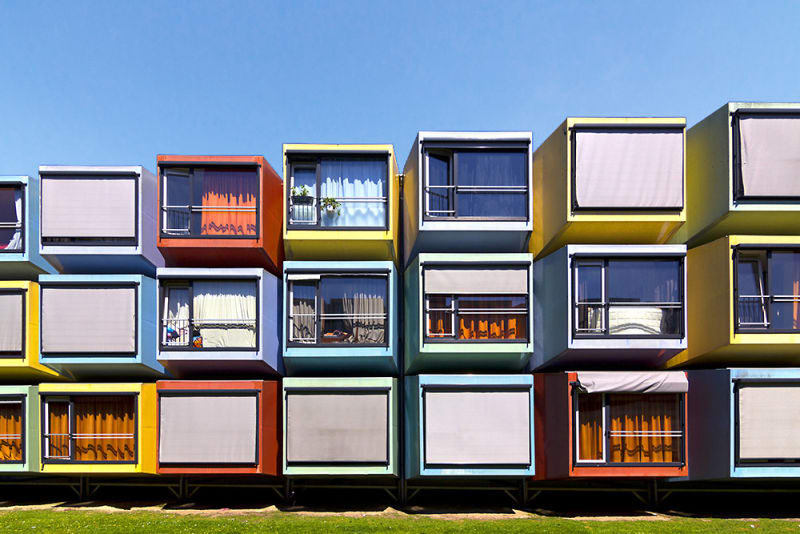 Taking tiny, modular living to the next level, these miniature, stacked abodes by architect Mart de Jong for the University of Utrecht are like no other dorm we’ve seen before. Designed with the intention of offering students a flexible, low-cost housing option, each colorful cube comes with its own kitchen and bathroom, and only cost about $80 a month to rent!

Easily the most iconic dormitory in the world, Tietgen Student Hall (or, in Dutch, Tietgenkollegiet) will put any standard brick dormitory to shame. Comprised of 360 rooms, each of which come with floor-to-ceiling windows that overlook the outer side of the structure, the large circular building is a refuge for natural light. Though certainly tiny (the one bedroom units only measure around 300 square feet), the view unquestionably makes up for the lack of space.

In an effort to make your dorm room your own, it can feel tempting to go overboard with color, pattern, wall art, and throw pillows. Instead of swathing your space in a sea of decor you know you’ll never touch come graduation, take a cue from this charming room at Kyung Hee University. Comprised of a simple scheme of muted pinks and purples, this student opted for a less is more approach. The repeated cactus and mountain motif lends a personal touch.

May we introduce yet another stellar BaseCamp property brimming with savvy small space solutions. Without visually breaking up the space (and thus making it feel tinier than it already is), a perforated net acts as a spacial divider between the bedroom area and the kitchen. If there’s one tip worth snagging for your own dorm, it’s that under-the-bed storage is an absolute must. Check out a few of our favorite chic bedroom storage picks, from metallic wire baskets to upholstered boxes, here!

The International House at Josai University is one dormitory with no bad angles. The structure’s entrancing, inter-woven facade—an effect created by its aluminum louvered surface and many projecting balconies—makes for a seriously Instagrammable moment. Depending on the time of the day, the building’s angular surface will vary from stark white to silver to a dreamy sunset orange.

Now, this is a scene we wouldn’t mind waking up to every morning, even if we were totally freaking out about an exam we didn’t study for. This brand new student complex in Cyprus includes a number of super modern finishes—like walnut-toned headboards and enormous built-in wardrobes—that won’t make you want to cringe on move-in day.

This story was originally published on Domino.

College Student Didn’t Like Dorm Life, So He Built a Tiny Home on Wheels for $15,000

Which dorm would you move into?