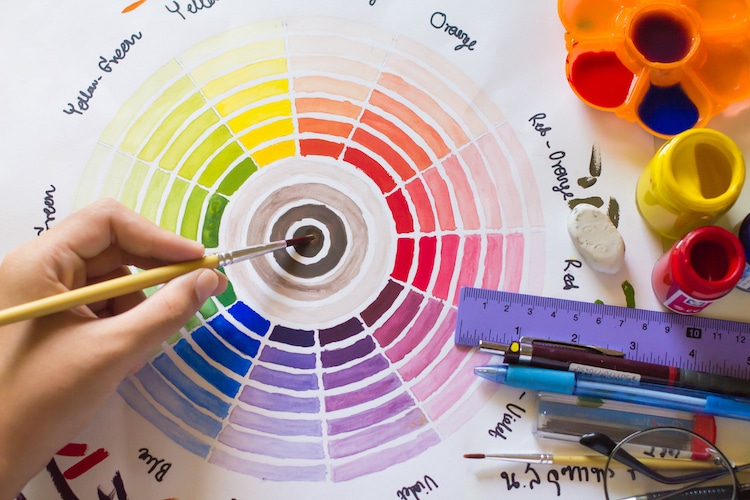 Stock Photos from Akira Kaelyn/Shutterstock
This post may contain affiliate links. If you make a purchase, My Modern Met may earn an affiliate commission. Please read our disclosure for more info.

We often take color selection for granted. After all, how easy is it to choose a hue from the color picker in Photoshop? Although we might think nothing of it now, mankind didn’t always have the color wheel at its fingertips. It was the exploration by some of the world’s great thinkers and scientific advancement that lead to its development. And as you’ll see, during its many iterations, the color wheel was not only a wheel, but a sphere, triangle, and more. These are some of the most notable color creations; throughout history, other people have assembled their own “reshuffling of the rainbow.”

The first color palettes were created 40,000 years ago by ancient people who created cave paintings. They produced pigment from what was around them—in this case, dirt, clay, or charcoal with a binder of spit or animal fat. These rudimentary palettes were limited in their hues and included earth pigments of red, yellow, and brown, as well as black from charcoal and burnt bones, and white from grounded calcite.

Color Evolves into Formal Color Theory (and the Color Wheel)

As artists continued to experiment with color, they evolved the pigments created by those before them. The color blue, for instance, was founded by the Egyptians when they figured out a process for producing permanent pigments from multiple minerals. With these new hues did not come a formal color theory, however. Color theory (not the color wheel) was first referenced during the Renaissance. Leone Battista Alberti is thought to have written it and laid the groundwork for the evolution of the color wheel. 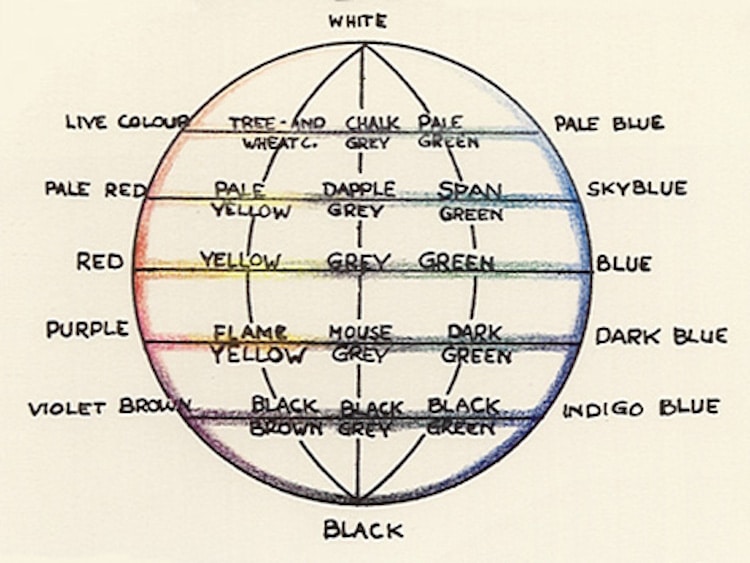 The color wheel is defined by just that—hues in a circular shape. One of the earliest diagrams can be traced back to the early 1600s. Aron Sigfrid Forsius‘ chart looks different than the modern color wheel, and it shows a different consideration of hues.

Through Forsius' studies, he concluded that colors could be arranged in a special order. His system used five main colors sandwiched between white and black. They were: red, yellow, green, blue, and gray. Each was graded as being closer to white or to black. 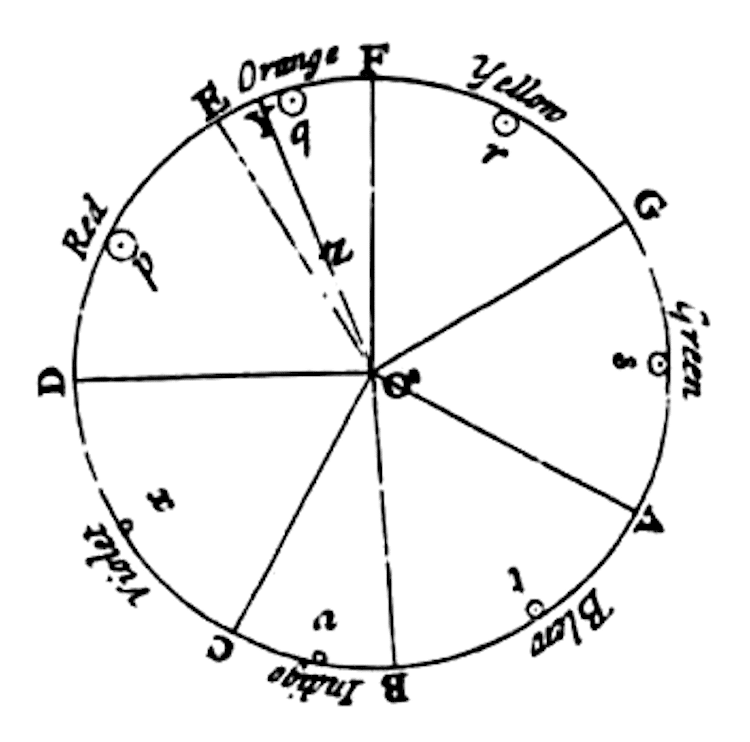 Sir Isaac Newton is perhaps best known for his work on universal gravitation and the laws of motion. But he applied the same scientific approach to color, too. He conducted experiments to study the relationship between colors; his most famous test used a prism. In a dark room, Newton placed a prism in front of a beam of light and created a spectrum of hues from red to purple. This proved that white light was composed of many colors.

Newton detailed his findings in his 1704 book titled Opticks and created an early color wheel based on the combinations he witnessed through his prism experiment. He made a crucial decision in his work, and that was to connect the violet end of the spectrum and with the red end—essentially creating the first iteration of the color wheel that we know and love. 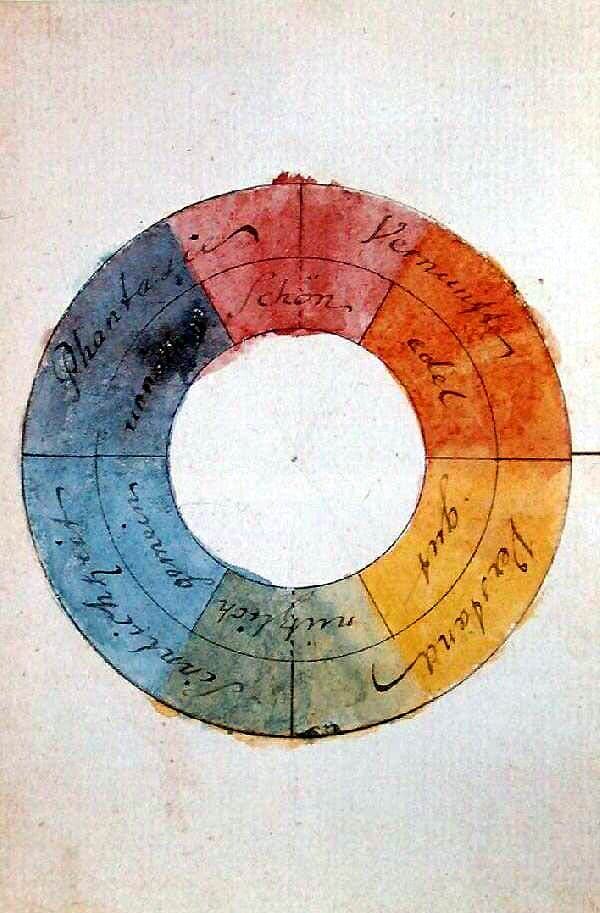 Johann Wolfgang von Goethe designed his own color wheel in 1810 that was a rebuttal of Newton's color spectrum theory. To him, darkness was not an absence of light, but rather it was its own force that played an active role in creating hues. When light struck dark, he theorized, their collision produced observable bits of color.

Tobias Mayer and His Color Triangle 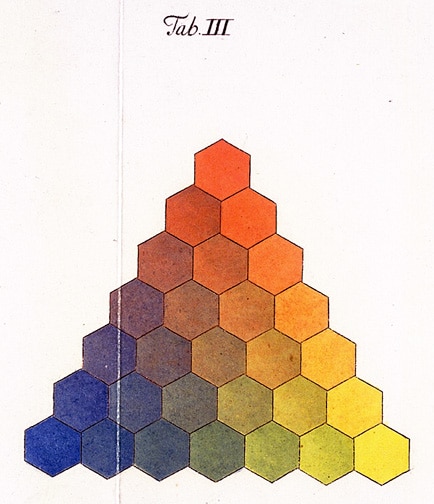 Newton’s color wheel was used by future theorists, as it was a demonstration of how colors can blend to produce other colors. Some well-known iterations that followed his discovery weren’t wheels at all. The work of Tobias Mayer, completed in the late 18th century, was a color system that arranged hues in a triangle. He placed the primary colors—red, yellow, and blue—at either point on the shape. The rest of the triangle was filled in with progressive hexagonal-shaped gradients of the three colors. Mayer created 12 gradations between any two colors, which he believed was the maximum degree of variance that the human eye could distinguish.

After Mayer’s color triangle was introduced, physicist Georg Christian Lichtenberg pared down the 12 colors to seven gradations per side. 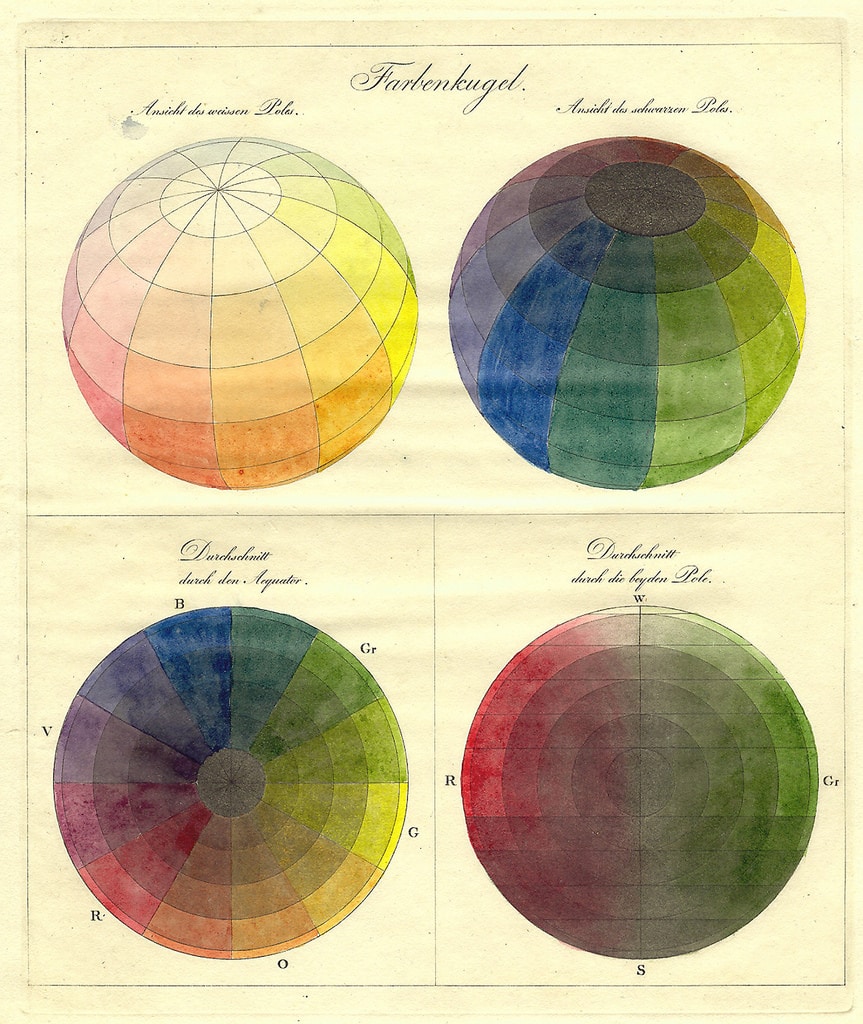 Another notable color wheel was a color sphere created by painter Philip Otto Runge in 1807. His model combined Mayer’s three primary colors (or “pure” as they were known) plus black and white and spread them over a three-dimensional globe that was complete with cross-sectioning. 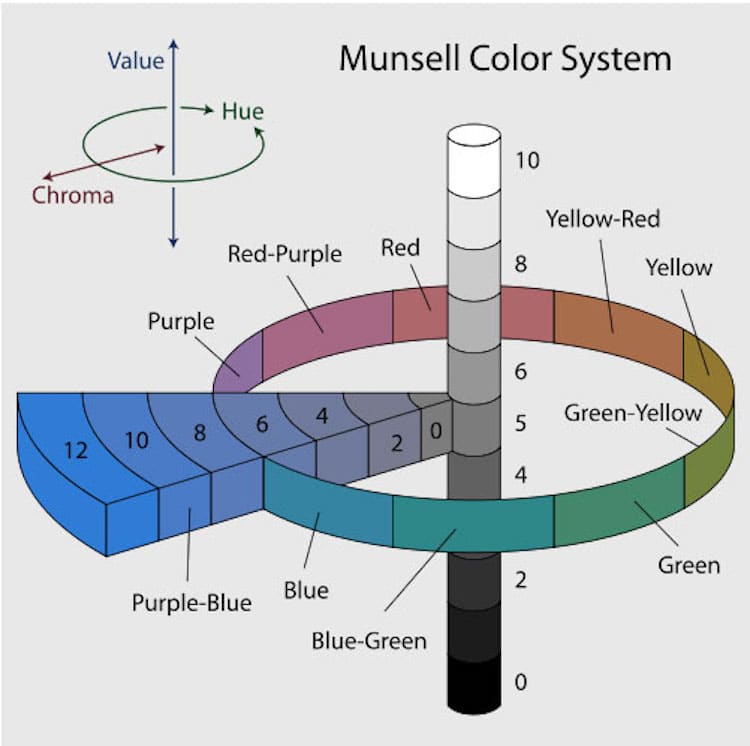 Albert Henry Munsell brought the color wheel into the 20th century by constructing a color system that combined three-dimensionality with references to Newton’s theory. His model featured a three-dimensional cylinder that was graded from white to black with a ring that showed hues as well as an intersecting chroma that showed the possible combinations of them all. 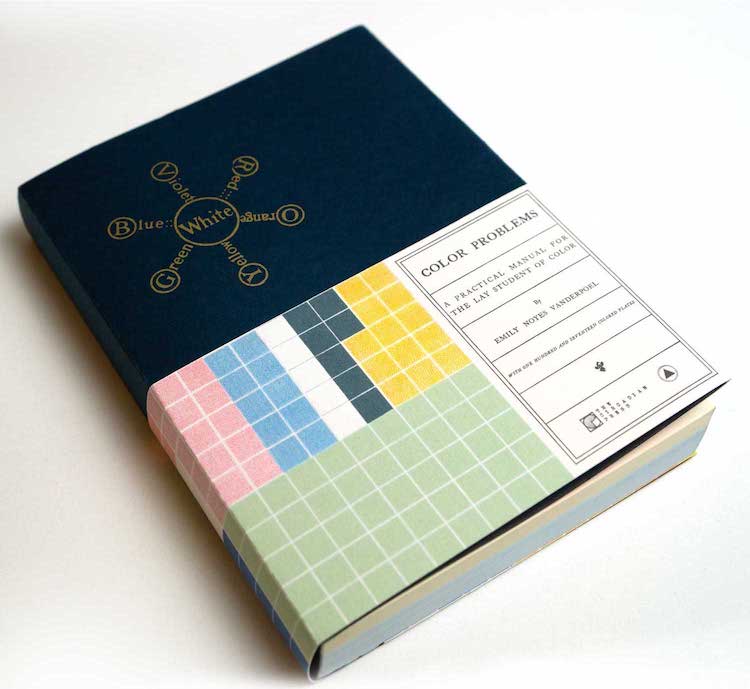 All of these iterations of the color wheel offer a different understanding of hues, and they highlight the exploration of the field throughout hundreds of years. As a creative person, it’s important that you understand how colors interact with and influence one another. (It will help you in your color mixing!) If you’re interested in learning more, pick up a copy of Color Problems by Emily Noyes Vanderpoel. The artist, scholar, and historian created her seminal text in 1903 in an attempt to make color theory available to everyone. She succeeded, and the text has recently been republished in a collaboration with The Circadian Press and Sacred Bones.

Prefer the online class setting? Richard Mehl teaches a color theory class through CreativeLive, as does Blake Rudis who gears his course towards photographers.

Interested in color history? Share
Like My Modern Met on Facebook
Get Our Weekly Newsletter
Become a
My Modern Met Member
As a member, you'll join us in our effort to support the arts.
Become a Member
Explore member benefits