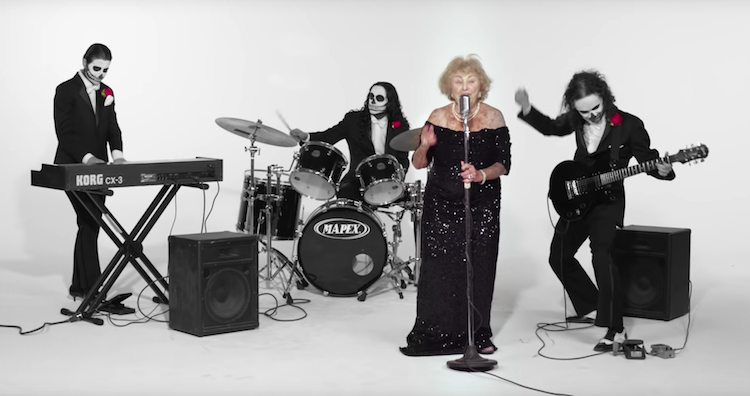 It’s not always easy to reinvent yourself, but it’s something that Inge Ginsberg has done over the course of her long life. Now at 96 years old, the Holocaust survivor has entered a new phase in her life: she is the frontwoman for a death metal band called Inge & the TritoneKings.

Prior to rocking out with the fast-paced guitar and drums, Ginsburg’s life sounds like the plot of a historic film. After fleeing the Holocaust, she ended up in a refugee camp in Switzerland, where she eventually looked after a spy villa for the Secret Service. Once War World II ended, Ginsberg moved again to America with her first husband Otto, and the two worked in the Hollywood music industry; they were responsible for writing songs like Dean Martin’s “Try Again” and composing with Nat King Cole and Doris Day.

Although Ginsburg’s career waned, she never stopped expressing herself through lyrics and poetry. But, how was she to convey her message? “I’ve never been a singer,” she says, “I’ve always been a writer.” When she was 93, her now-musical collaborators pointed out that her poetry sounded like it could be the lyrics to death metal songs. Instead of singing, she could shout them.

Ginsburg embarked on a journey that offered her the chance to express herself in a way that’s both new and a familiar. In a short documentary called “Death Metal Grandma” appearing on The New York Times website, filmmaker Leah Galant tells the story of Ginsburg. Both fascinating and charming, it’s a reminder to continually discover ways to live life to the fullest. “It’s important to stay active and surround yourself with young people,” Ginsburg says, “and keep doing things you’ve never done before.”

Inge Ginsberg is a 96-year-old Holocaust survivor who, for the past few years, has been the front woman for a death metal band.

She and her band even appeared on an episode of Switzerland's Got Talent.

Ginsberg's amazing story is the subject of a documentary called “Death Metal Grandma.” Watch the short film below.

Over 4000 Portraits Assembled Into One Mesmerizing Stop-Motion Music Video