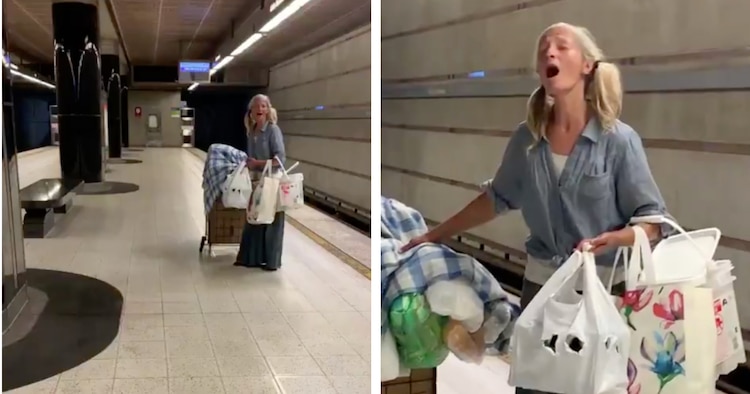 Just a few days ago, Emily Zamourka thought that her dreams of finding fame in Los Angles were unattainable. Over the last two years, the 52-year-old Russian immigrant had lost her home and, most poignantly, her precious violin—an instrument that was worth much more than its $10,000 value when it was stolen from her. “It was my treasure, and it was my income, too,” she said. “It was everything.” After 24 years of living in the City of Angels, Zamourka had lost all hope. Fortunately, however, things have recently turned around for the self-trained musician, whose “heavenly” voice has made her a viral sensation.

In late September, a Los Angeles police officer heard Zamourka singing in the subway. Mesmerized by her A capella rendition of Puccini's “O Mio Babbino Caro,” the officer filmed the busker. Shortly after, the Los Angeles Police Department posted the minute-long clip on Twitter, where it was accompanied by an equally short but sweet message: “4 million people call LA home. 4 million stories. 4 million voices . . . sometimes you just have to stop and listen to one, to hear something beautiful.”

The video quickly went viral, turning the unknown Zamourka into the “Subway Soprano” seemingly overnight. Her luck, however, has not stopped with internet celebrity and a nickname. Inspired by her talents, several people have set up crowdfunding pages for the musician, which, together, have accumulated nearly $100,000 in donations. She's also already made her first professional public performance, has been interviewed by a wealth of newspapers, and, most astoundingly, has landed a recording contract with Joel Diamond, a Grammy-nominated producer.

So, how does Zamourka feel about her long overdue rise to fame? Speaking to a full audience at an Italian Heritage event in Los Angeles, she said: “Eventually, I did touch your spirits and I'm so glad about that, that I could touch your heart with my voice. Thank you so much for all of this that's happening right now. I really thank you. I'm so overwhelmed.”

Watch the video that launched homeless woman Emily Zamourka to fame and landed her a recording contract.

4 million people call LA home. 4 million stories. 4 million voices…sometimes you just have to stop and listen to one, to hear something beautiful. pic.twitter.com/VzlmA0c6jX

And now see her star in her first public performance as the “Subway Soprano.”