The Fabergé Egg: How Imperial Russia’s Most Elaborate Easter Gift Came to Be 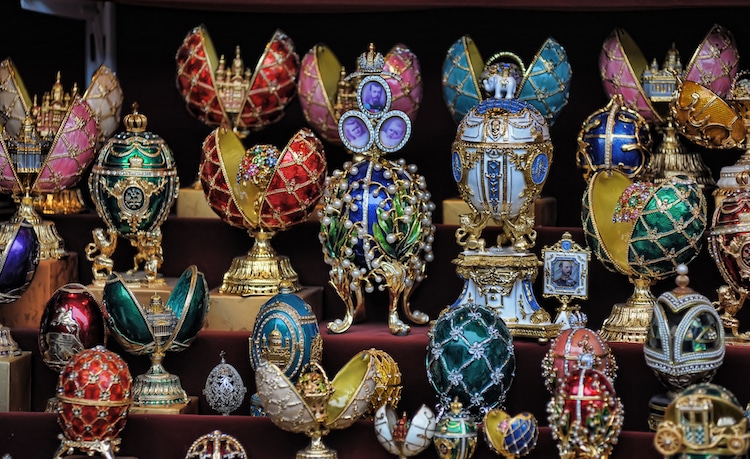 You’ve probably heard of Fabergé eggs—opulent, egg-shaped ornaments decked with gemstones and precious metals—but did you know about their history with Imperial Russia? These highly collectible objects were manufactured under the supervision of Peter Carl Fabergé between 1885 and 1917. The first was crafted for Tsar Alexander III, who decided to give his wife—the Empress Maria Feodorovna—an extra special Easter egg in 1885.

Known as the Hen egg, the white enameled “shell” opens to reveal a shining yellow-gold yolk. This then opens to reveal a multicolored golden hen that itself also opens to reveal a miniature diamond replica of the imperial crown and a ruby pendant. The Empress was so delighted by the elaborate gift that Alexander appointed Fabergé a “goldsmith by special appointment to the Imperial Crown” and commissioned another egg the next year. After that, Fabergé was given a team of craftsmen and the freedom to design all future imperial Easter eggs, which became more and more elaborate over time. The only requirement was that each egg had to be unique and contain a hidden surprise. 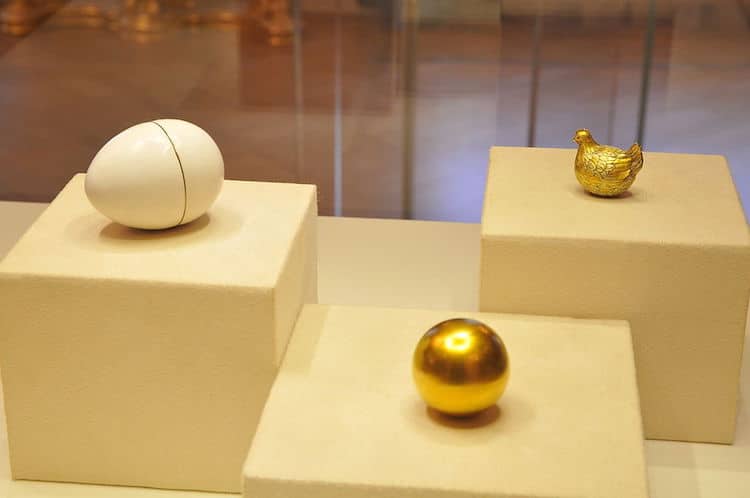 Some of the most famous Fabergé eggs include the Diamond Trellis which encases a tiny ivory elephant covered with precious stones. The interior of the Gatchina Palace egg reveals a miniature gold replica of the palace at Gatchina, and many of the eggs feature little portraits of the royal family. Some were designed to commemorate important people or events, such as the Order of St. George egg made during World War I. It pays homage to the highest military decoration of the Russian Federation.

Even after Alexander III's death on November 1, 1894, his son, Nicholas II, continued to present a Fabergé egg each year to both his wife, Alexandra Fedorovna, and his mother, the Dowager Empress Maria Fedorovna. Fabergé was also commissioned to make similar eggs for a number of private clients, including the Duchess of Marlborough, the Rothschild family, and the Yusupovs. Additionally, the royal goldsmith was asked to design 12 eggs for the industrialist Alexander Kelch, though only 7 were completed.

When the Bolsheviks seized St. Petersburg in 1917, the three-century-long Romanov rule came to a brutal end. The Imperial family was imprisoned and later executed, leaving behind their 50 Fabergé eggs, created between 1885 and 1916. The Fabergé family were forced to flee Russia after the nationalization of the House of Fabergé, marking the end of their lavish productions. 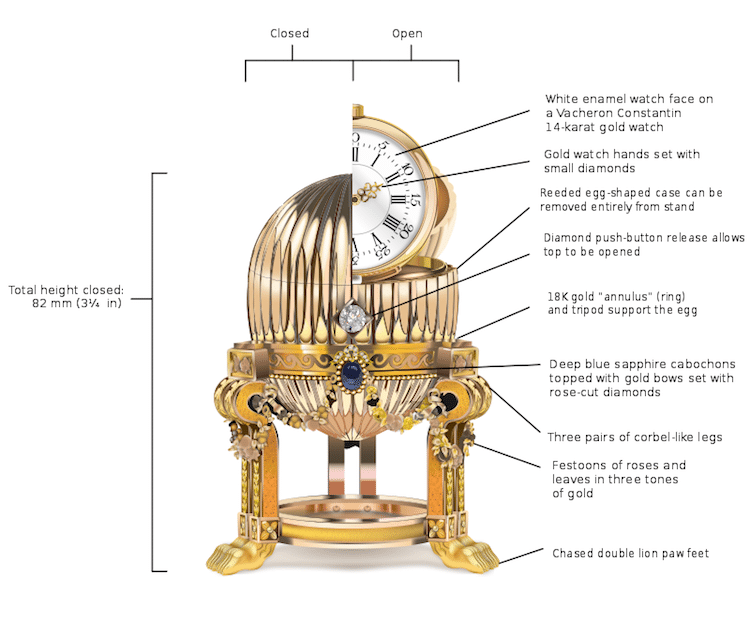 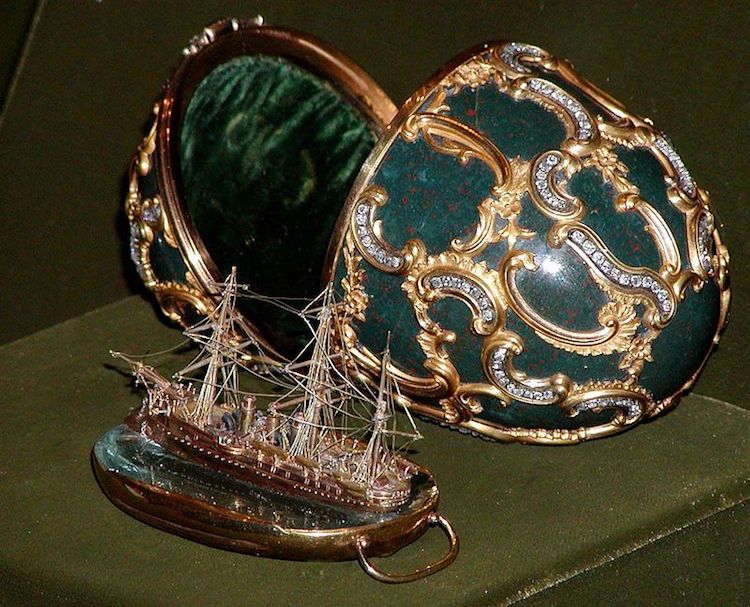 Where are the Fabergé eggs now?

While many of the family's “Imperial” eggs were lost during the revolution, 43 of them survived (although some of the surprises are still missing). Ten of the imperial Easter eggs are now displayed at Moscow's Kremlin Armory Museum, while others belong to museums and private collections around the world.

In 1927, Joseph Stalin sold many of the eggs to buyers outside of Russia. The second largest collection of Fabergé eggs belonged to Malcolm Forbes and was displayed in New York City. Comprising 9 eggs, and around 180 other Fabergé objects, the collection was due to be put up for auction at Sotheby's in February 2004. However, just before the auction began, the entire collection was purchased by Russian businessman Viktor Vekselberg. 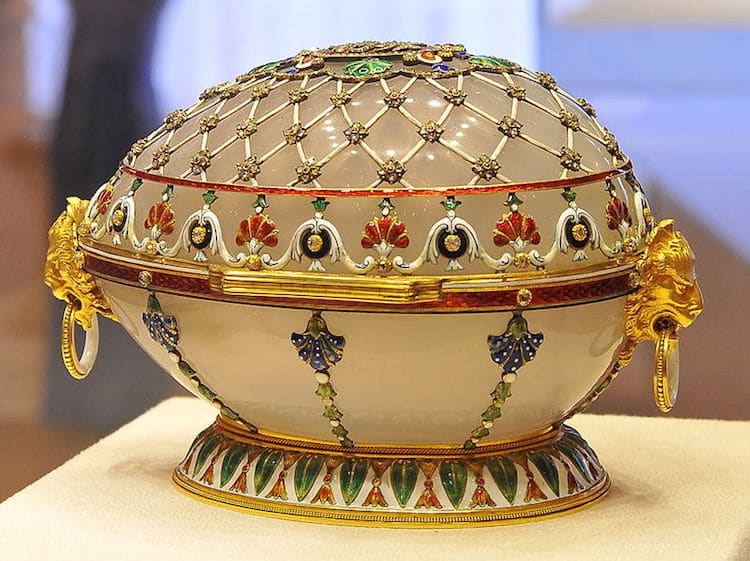 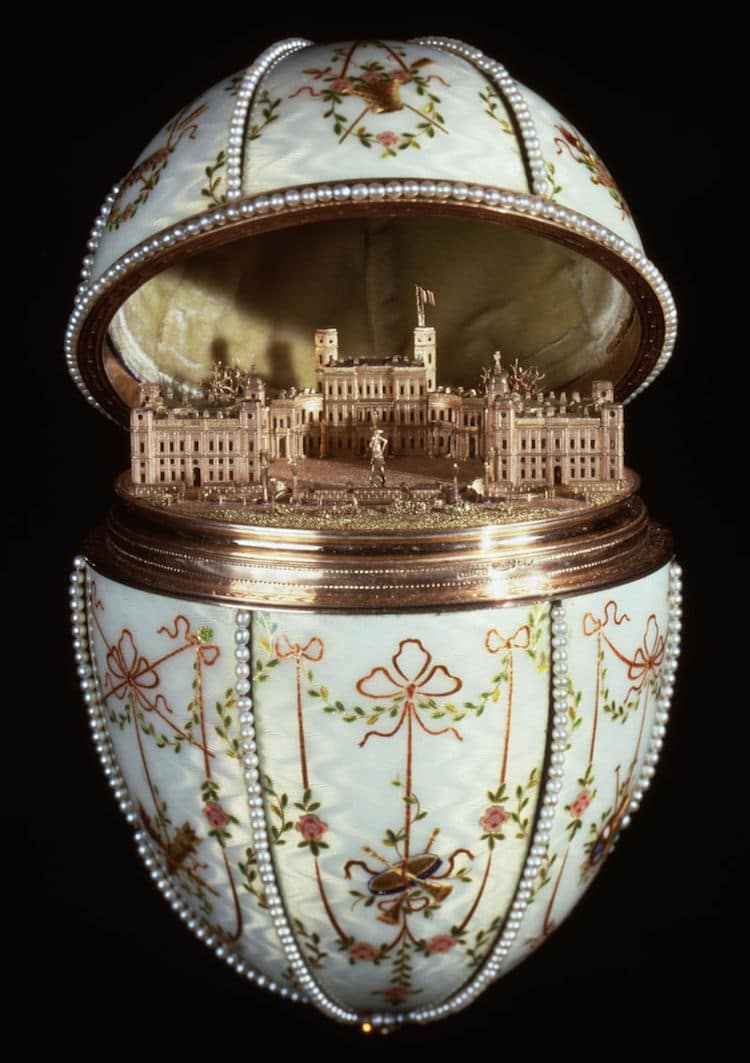 Cherished Fabergé eggs are frequently exhibited in museums around the world, but they've also caught the attention of the contemporary art world. In 2015, American artist Jonathan Monaghan created After Fabergé, a series of digital prints that visualize the luxurious eggs for the modern, digital age.

“For me, the Fabergé egg has been something that’s been in our cultural lexicon—in movies, TV shows, and so on—always as this object of desire, this very high status item,” he says. “I took the form of the egg, but replaced the gold, jewels, and enamel, with electronic components, like USB ports, or a Starbucks or furniture parts, and banal everyday elements from the 21st century.” Embellished with architectural details and the luxuries of today, the results look like futuristic, egg-shaped spaceships fit for otherworldly royals.

The Fabergé trademark has been sold to various companies throughout the years, but today it’s owned by Fabergé Limited, which makes egg-themed jewelry. In 2015, the company announced the Fabergé Pearl egg: the first Imperial-style egg in 100 years. It was crafted in collaboration with the powerful Qatar-based Al-Fardan family, one of the world’s most renowned pearl collectors.

The stunning design features a mother-of-pearl exterior, 39 white pearls, 3,305 diamonds, and yellow gold details. It opens to reveal a unique 12.17-carat grey pearl hand-sourced from the Arabian Gulf. Reportedly valued at $2 million, it was the inaugural piece in a series of private commissions from the 177-year-old jewelry house.

Today, Fabergé eggs have become symbols of power and wealth, and have stirred up countless treasure hunts. They’ve even inspired several film plots, including Octopussy (1983), Ocean's Twelve (2004), and Thick as Thieves (2009).

Check out the Fabergé website to see how these precious family heirlooms have been adapted into a modern jewelry line. 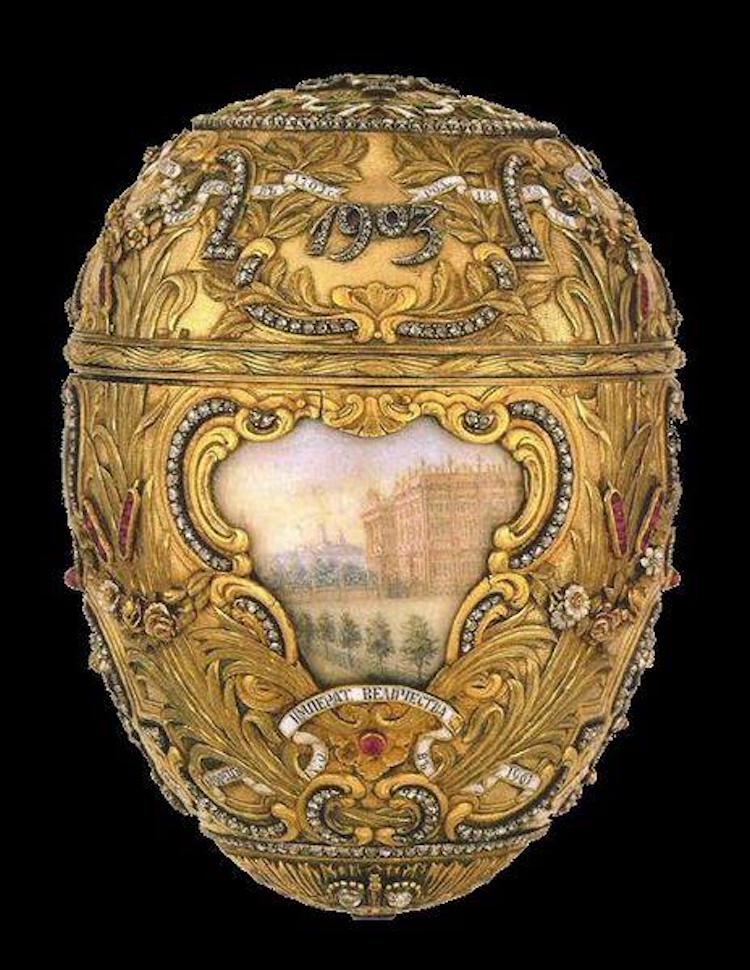 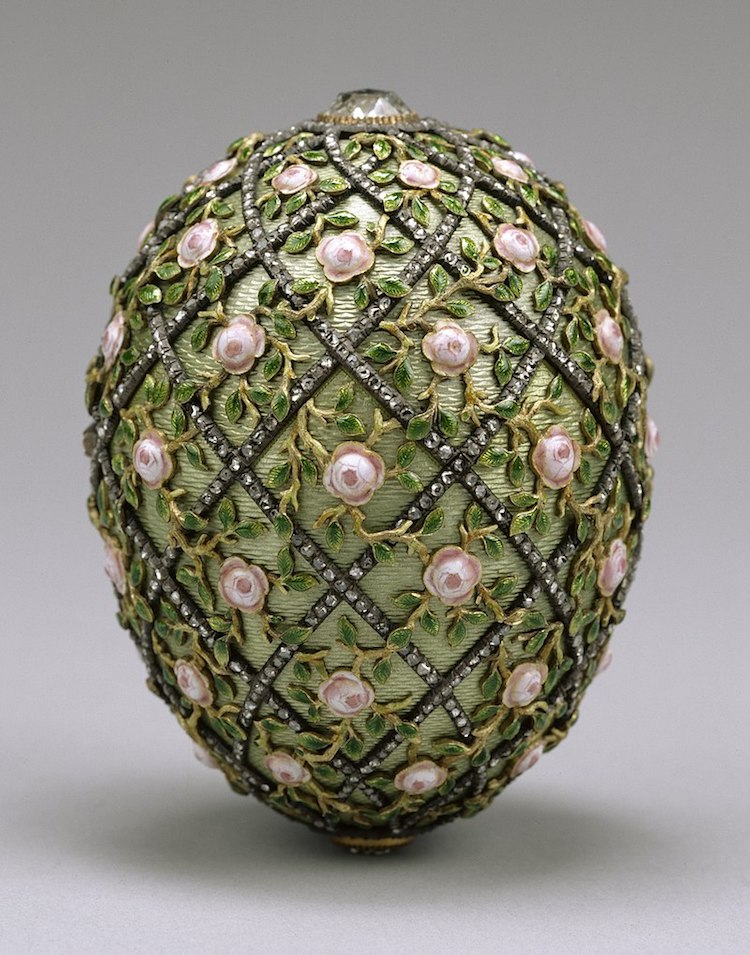 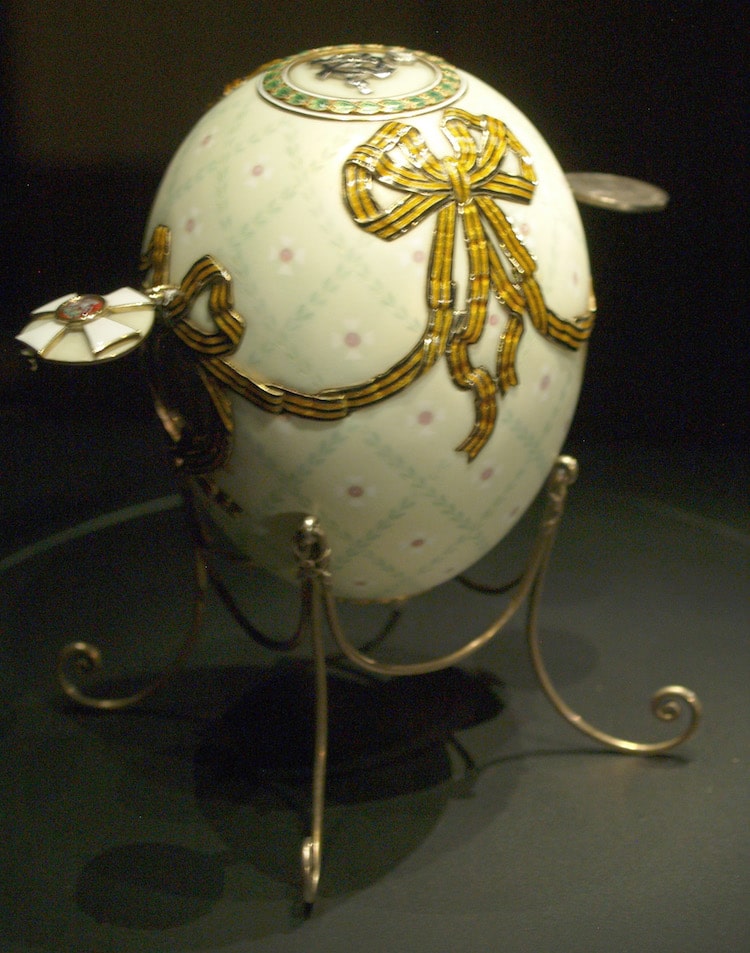