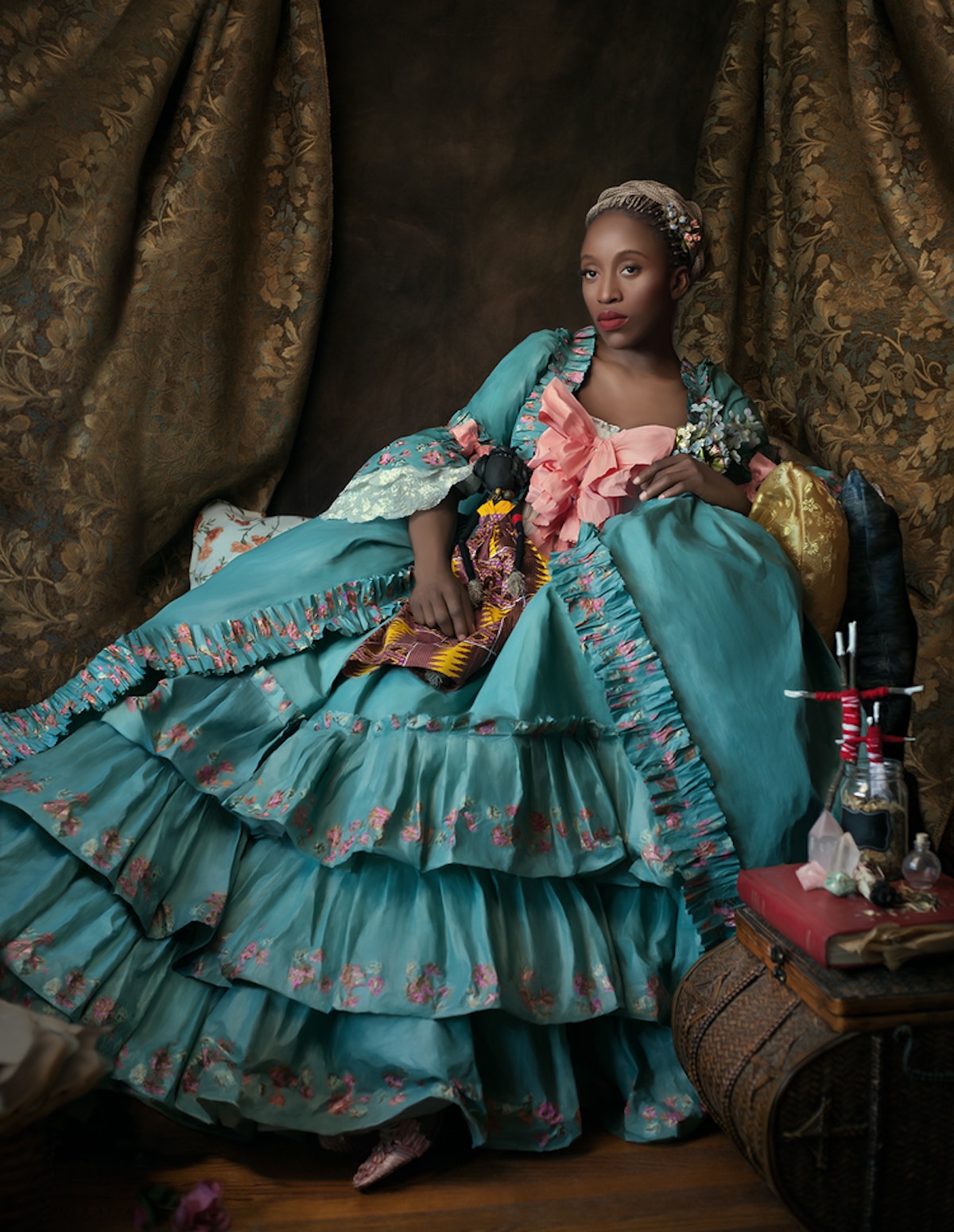 Though she's only been practicing her craft for four-and-a-half years, Haitian-born, New York-raised artist Fabiola Jean-Louis is already making strong statements with her fine art photography. Her series Rewriting History is a powerful set of painterly photographs that sees the artist explore the Black experience through the manipulation of imagery typically associated with White European nobility of the 15th to 19th centuries.

For photographs, which look like oil paintings, Jean-Louis not only worked as a photographer, but also crafted the paper gowns each model wears. Replete with detail and symbolism, she infuses each composition with flashes of the often brutal moments Black women have endured throughout history. An interesting juxtaposition of aesthetic beauty and horrific detail, it's a reminder that we must look beyond the surface to dig into a sometimes painful history. Only by doing this will we be able to move forward in understanding.

“The series speaks to the shocking treatment of Blacks throughout history and the trauma inflicted on their bodies as juxtaposed with the abstract idea of black freedom,” Jean-Louis writes. “Simultaneously, it engages with a vision of the future—one of hope, resilience, and justice.” In Madame Beauvoir's Painting, for instance, we see the model gazing at a painting of a man, back bloodied from lashings. These markings are mirrored in the golden embroidery on the back to the model's dress, not as a badge of honor but as a show of respect to those whose suffering paved the way.

We had the chance to speak with the artist about how the series was conceived, how she feels about labels, and what she hopes people will take away from Rewriting History. Read on for our exclusive interview. 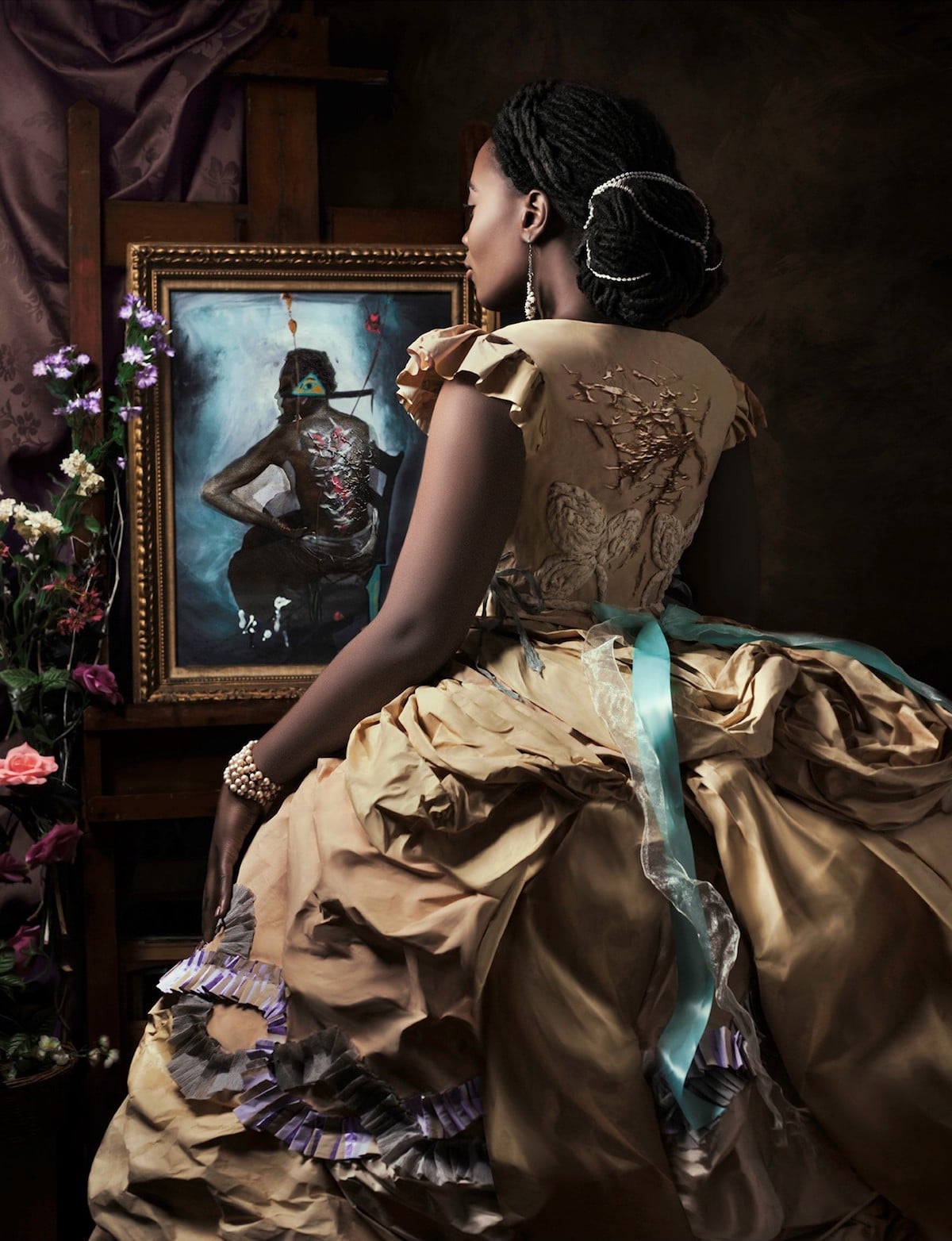 Can you explain a bit about how the Black Lives Matter movement helped shape this project?

The BLM movement had pretty much started at the same time that I began the Rewriting History series. Truthfully, I didn't look to the movement for help in shaping the project. I was responding directly to police brutality, as well as the need for Black women to claim space. Because the series is identity-based, it was probably being shaped long before I brought it to life. 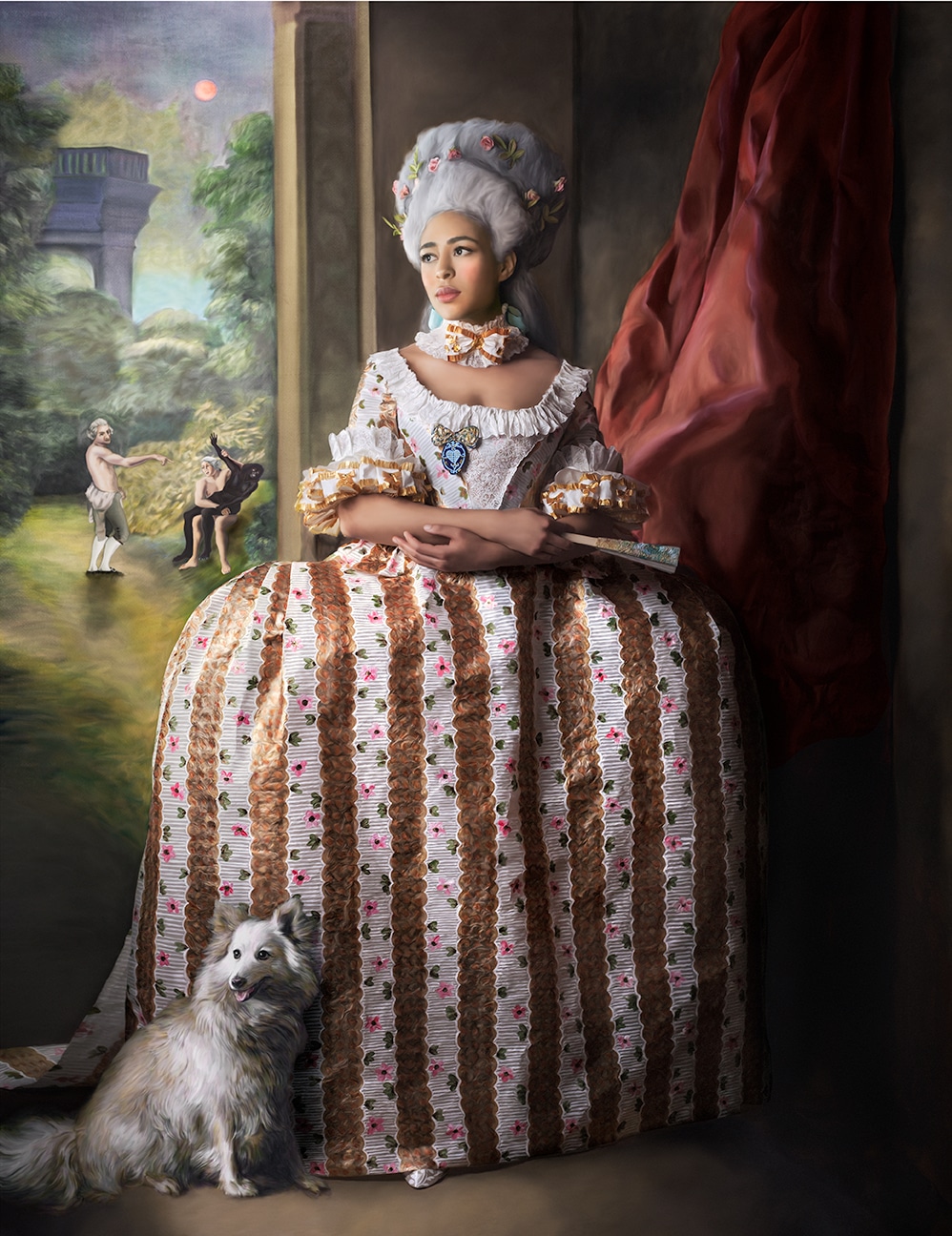 They'll Say We Enjoyed It

The images have incredible grace and beauty, but there is such deep meaning in the details. How did you use this contrast between the aesthetic and the often difficult to handle details to accomplish your goal with this series?

Early on, I knew that I would take a different road in how I chose to tell the stories of violence against Black bodies. I knew that I'd be preaching to the choir if I was too obvious about our suffering. We live in a desensitized world… Unfortunately, it means that society has gotten used to the public murders of people of color. It is nothing for the news to splash our bloody, dead bodies on the screen for all to see. And seeing that does something to the human mind. It starts getting used to it. Because of that, I chose to let beauty be the vehicle that I would carry those ugly truths in. I wanted all the details to symbolize all the intricacies of our existence and history. I also wanted to bring the viewer in, to feel comfortable—at least long enough to carry them to that hard place. 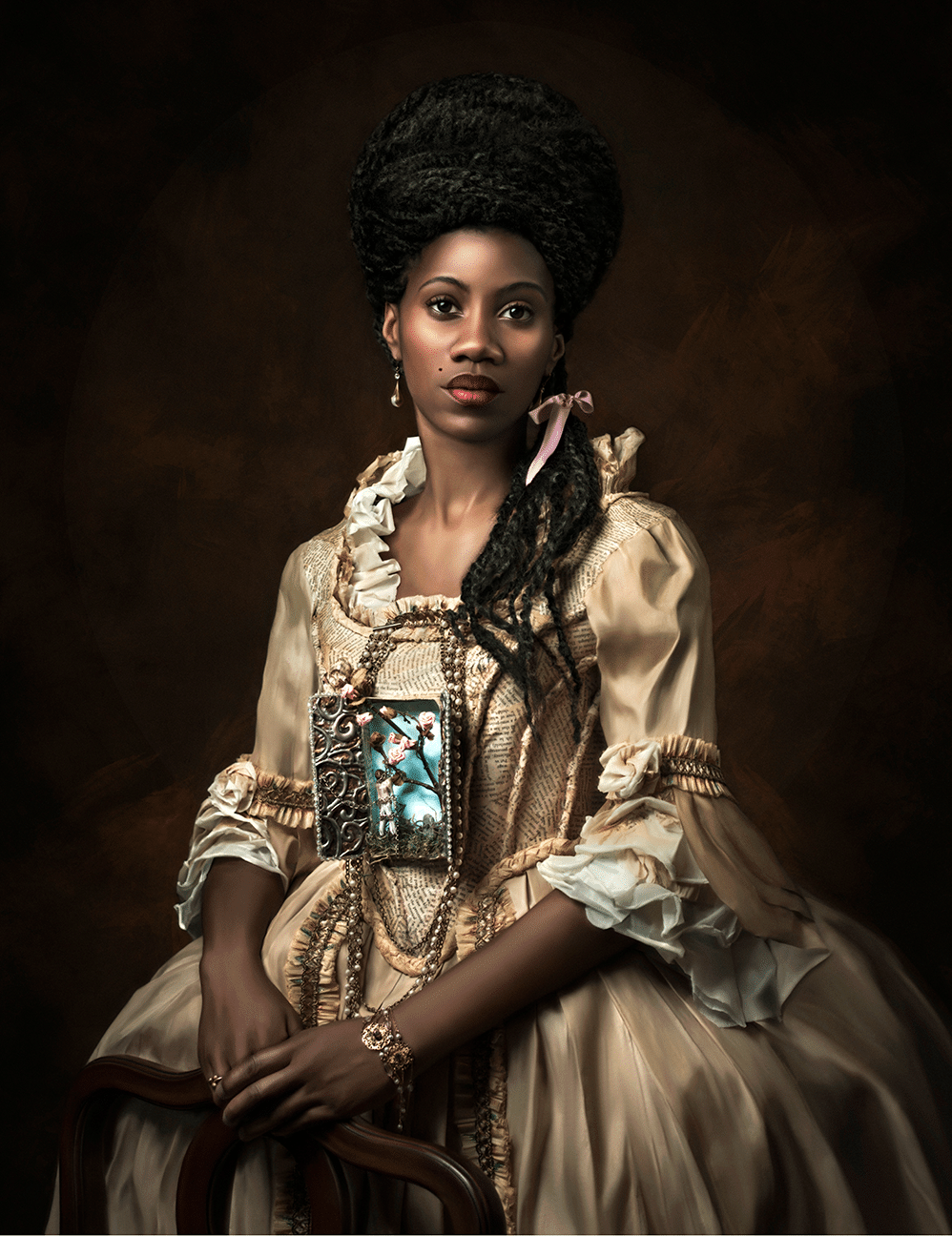 The project is a full multi-media affair, with you even creating the paper dresses. Is that a first for you—fashioning the clothes, that is—and how did that part of the experience compare to your role behind the lens?

Although I went to the High School of Fashion Industries, and majored in fashion design, I left fashion and most of my art to pursue a career in medicine. By the time I began work on Rewriting History, I had only been working behind the lens for a little over one year, and was experimenting with costume design by using household materials like hot glue, duck tape, and coffee filters. I was only a novice then, and saw it all as a hobby.

All of that to say, even though I had a little experience with fashion and photography—everything about Rewriting History was a first for me. It was completely new for me to learn how to design a gown, much less how to make it out of paper. At the same time, I was at the point of developing my creative voice, and photographic style—which is now clearly a painterly aesthetic. Everything was happening at once, so I had to learn how to conceptualize the work in many layers (from photographic to set design to costume design to storytelling and back again), and all without even a sketch. I don't sketch anything because I feel limited. 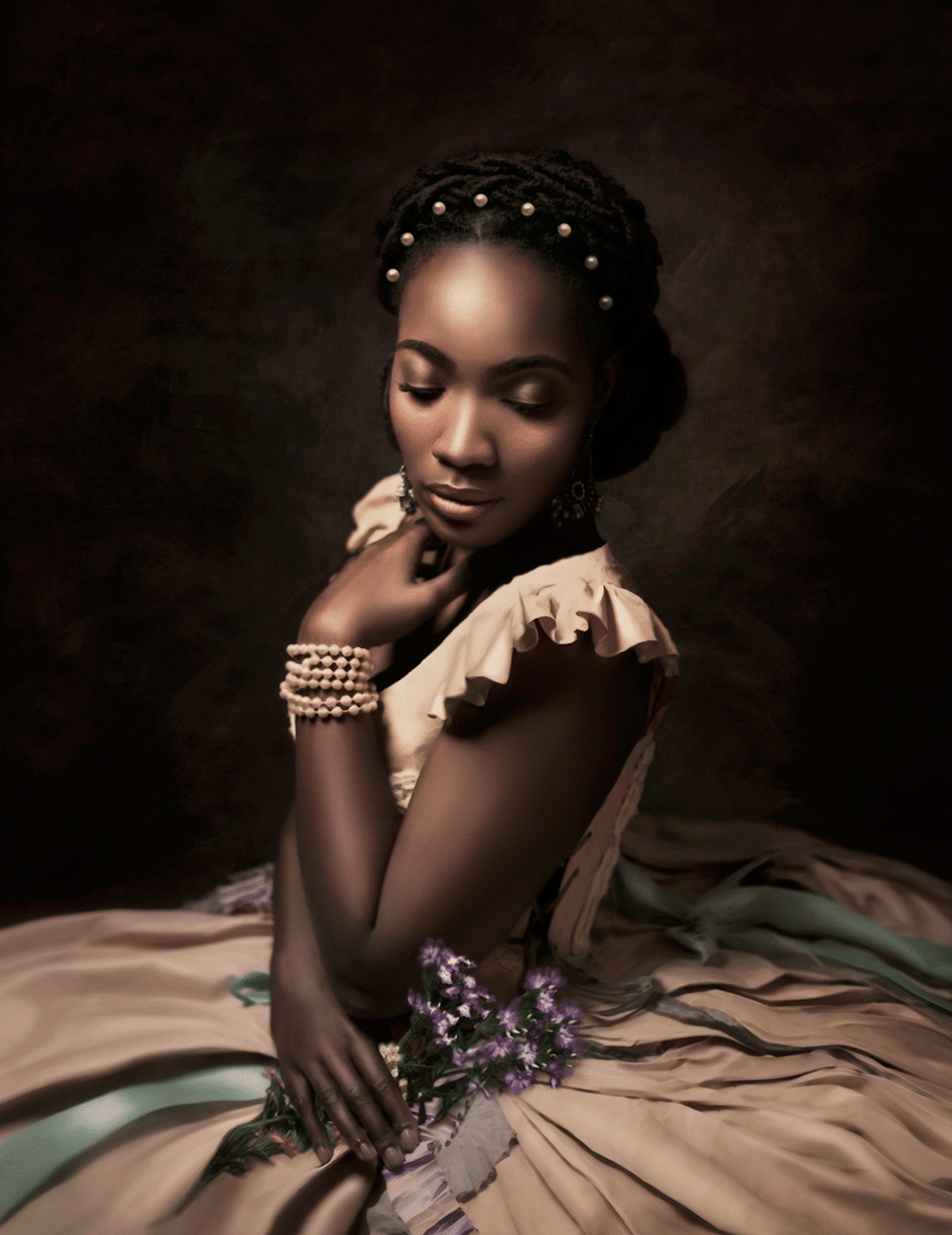 People love to put labels on artists, whether it’s talking about “female” artists or “Black” artists. How do you feel about this labeling of minority artists and through which lens do you hope that the public views your work?

It's very true that people love adjectives in front of the word “Artist”—unless you are a White one. When the artist is White and male, they are simply referred to as an artist. However, things start to get interesting when the artist is female, and even more so when she is Black.

I really am two ways about it. On one hand, my art should speak for itself. Being labeled as a Black, female artist can often feel like the worthiness of my work is in question. I want viewers to connect with my work because they naturally do, and to judge it on its own distinction.

On the other hand, I believe we are all looking for qualities in others that we relate to. This is linked to the development of identity. It is important for people—especially marginalized groups—to know that one of their own is in conversation with them through art. It is also important to understand the perspective of the artist. Sometimes gender and race help people feel as though they understand the perspective better. And, that's what classification is about: an attempt to understand. 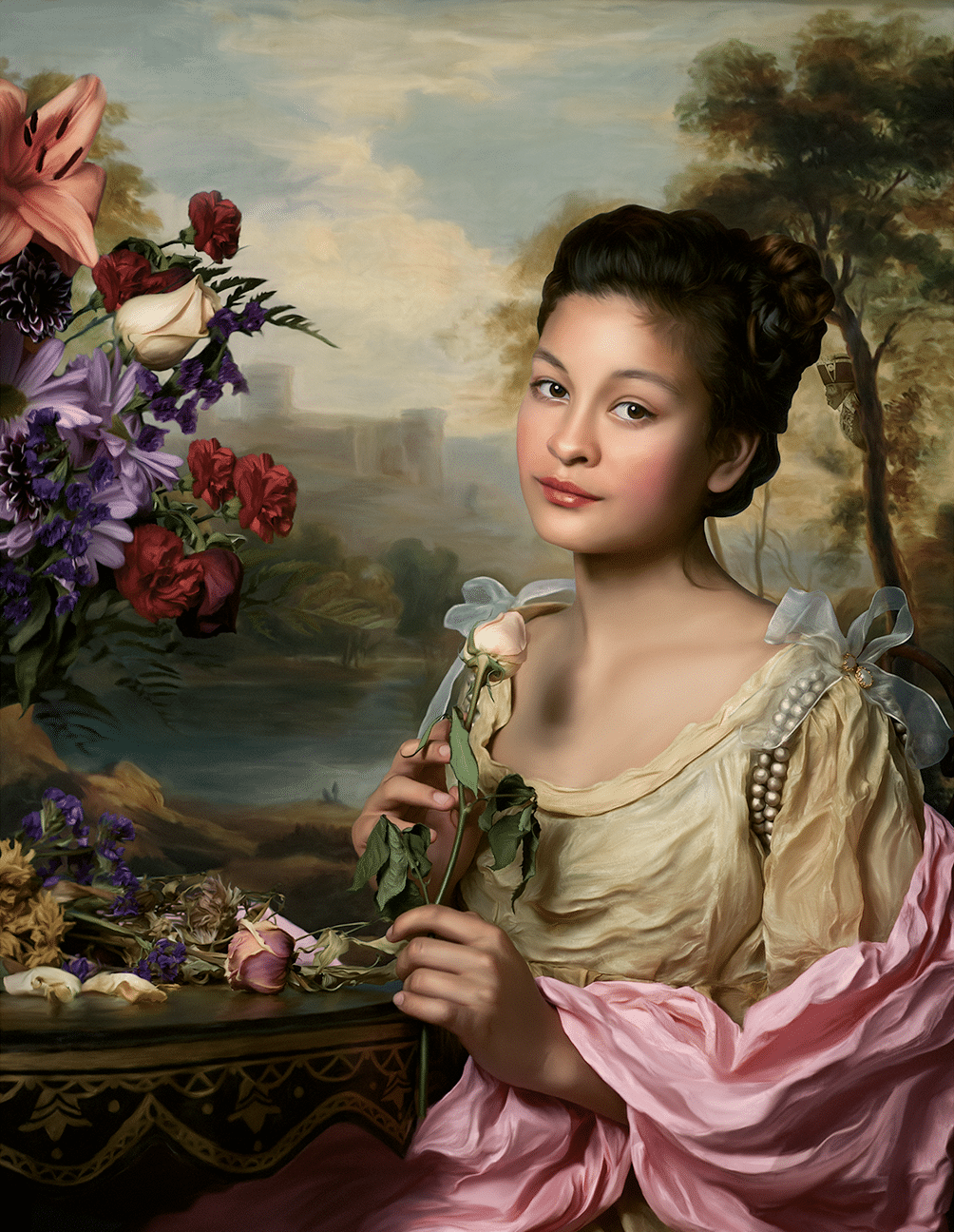 Whisper of a Revolution

What do you hope that people—of all races—take away from Rewriting History?

I always find this question interesting, because I cannot control the takeaway. I've heard some interesting perspectives about the work, and many times I don't correct the person, even if it's far from the original goal of the image. Art is meant to be interpreted. There is learning to be found on my part when I just listen. There are things that sometimes I don't even realize that I was communicating until someone said it.

That said, I hope that people walk away with the understanding that there is much work to do in the fight for justice. That blackness is omnipresent, and that we (blacks) should not have to fight for our existence. I hope that Black women and little girls feel celebrated, honored, and loved. I want them to know that I cherish them. 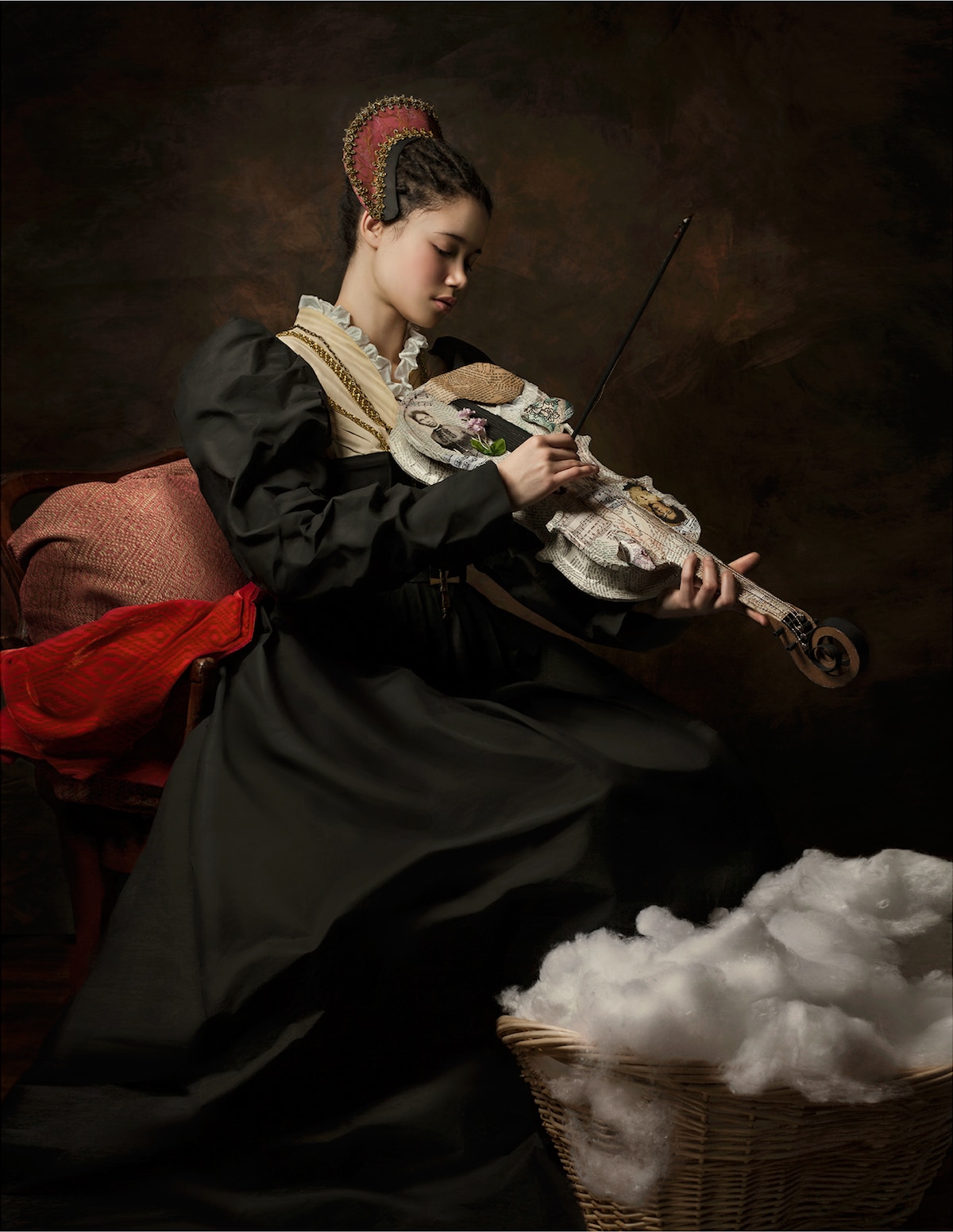 Currently, pieces from the Rewriting History series are on exhibit at Brooklyn creative center BRIC in a collective exhibition that explores the relationship between two countries living on one island—Haiti and the Dominican Republic. Delving into their intertwined history and tradition of cultural exchange, as well as their shared challenges of racism and social injustice, the exhibition is a unique opportunity to see creative expression from the Caribbean nations. The show runs until April 29, 2018 and admission is free of charge.

My Modern Met granted permission to use photos by Fabiola Jean-Louis.

Like art with a powerful message? Share
Like My Modern Met on Facebook
Get Our Weekly Newsletter
Become a
My Modern Met Member
As a member, you'll join us in our effort to support the arts.
Become a Member
Explore member benefits 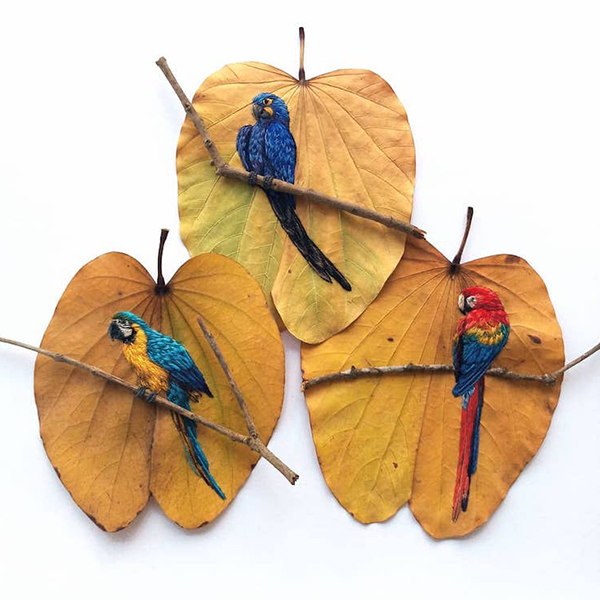 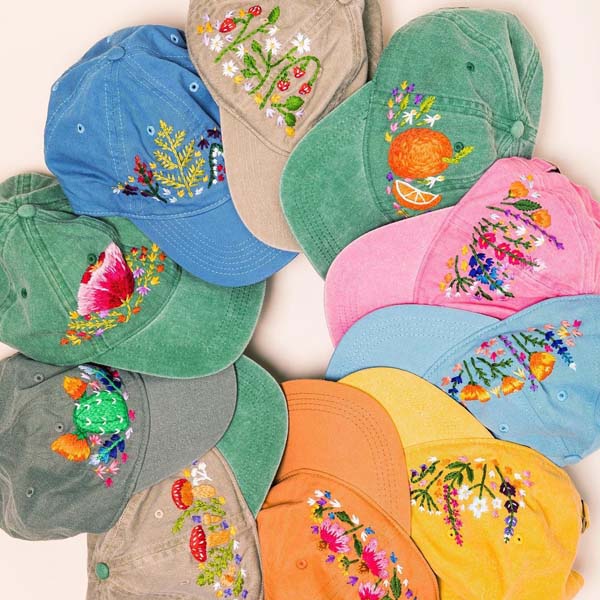 How to Customize Your Favorite Cap by Decorating It With Embroidery