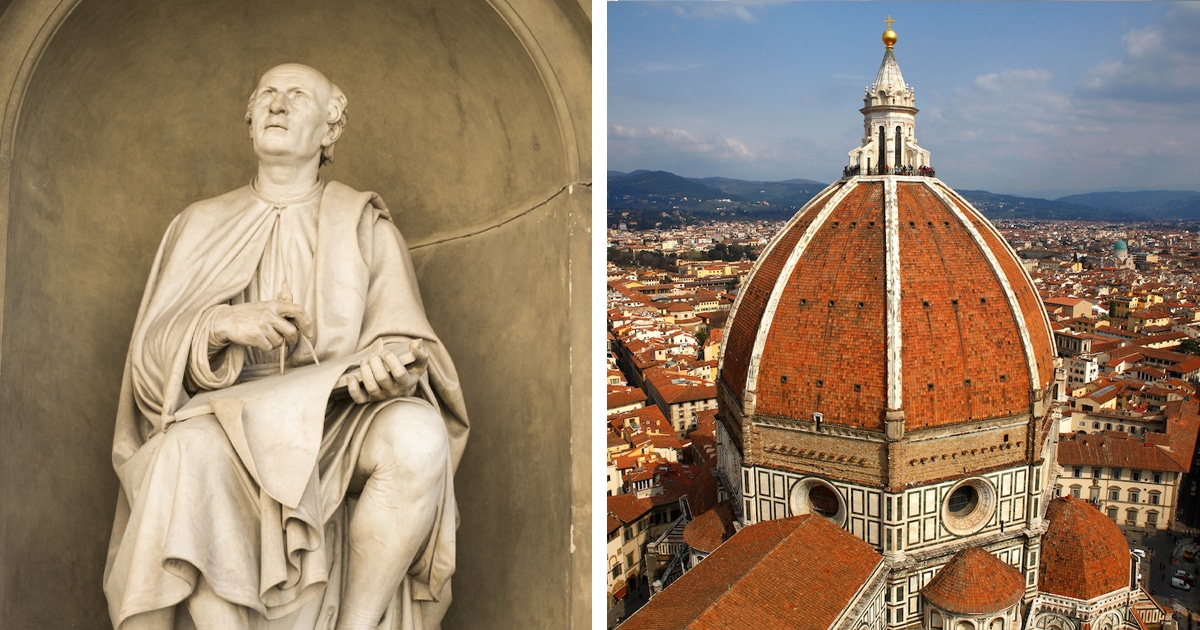 Amongst these many “hats” and the creative projects he completed throughout his life, Brunelleschi's biggest accomplishment is almost undoubtedly the Dome of Florence. This marvel of engineering sits at the top of Santa Maria del Fiore, or the Florence Cathedral, and is still the largest brick dome in the world. You may have already heard some anecdotes about Brunelleschi's Dome, such as that many believed it impossible and that the secret to constructing it was long lost to history.

Still, there is much to learn about this iconic Renaissance figure. Some of our favorite facts about Brunelleschi cover incredible examples of his design work, but others may help you understand the kind of person he was. Brunelleschi was a fiercely proud—and at times even arrogant—designer who knew his worth and had little time for those who could not see his vision. You may be able to see these qualities in the following 10 facts about his life and work.

Here are 10 facts about Filippo Brunelleschi and the famous Dome of Florence. 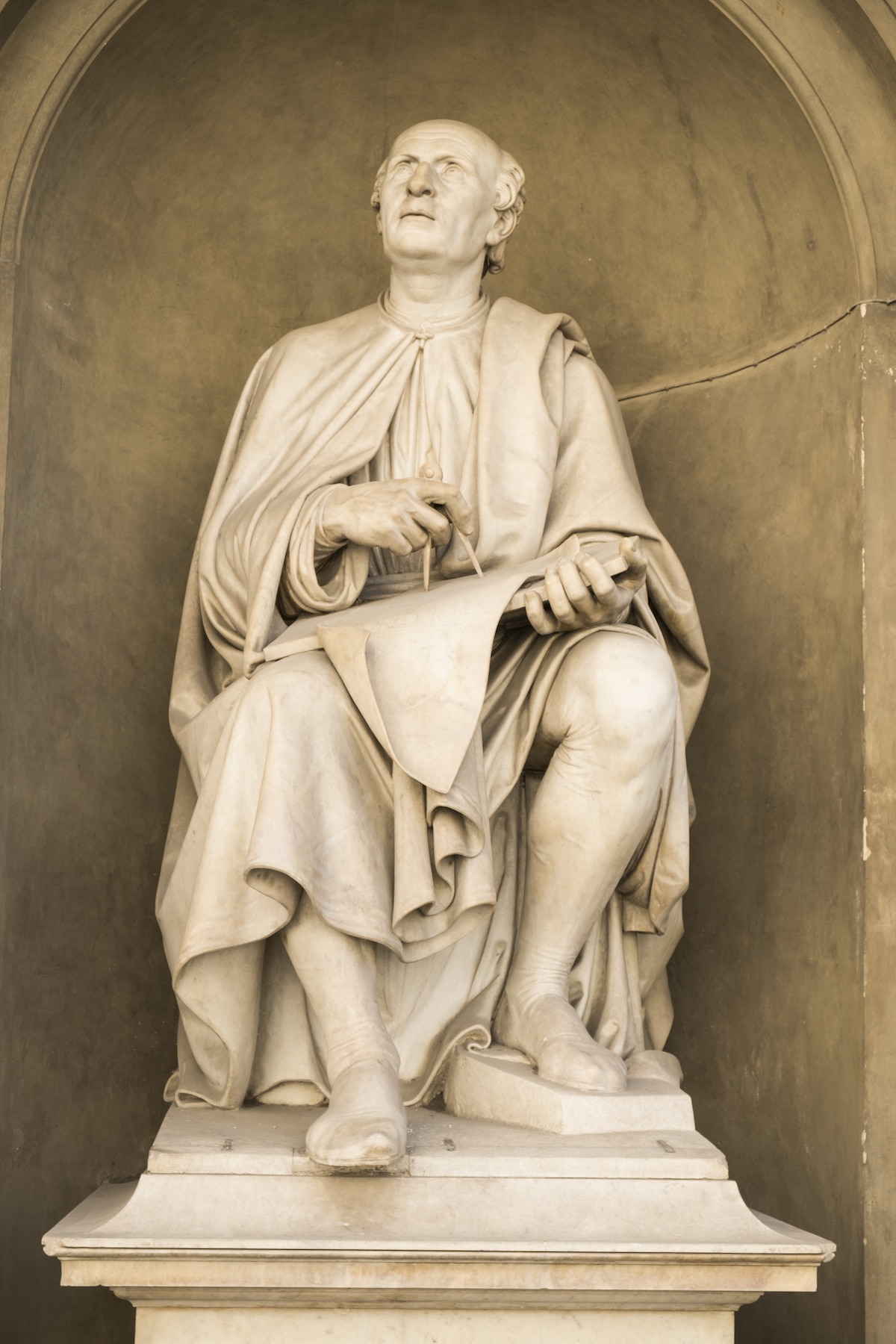 Brunelleschi is considered the inventor of linear perspective drawing and painting. His technique was a revolutionary device for representing buildings and other objects in 3D. This is not to say that people were not already drawing in 3D, but they were not consciously using Brunelleschi’s technique of picking a vanishing point to which all lines receded to.

Brunelleschi studied the appearance of objects as they appeared closer and farther away. His studies included drawings and paintings of the Florence Baptistery and the Palazzo Vecchio as he perfected the technique. He shared this technique and asked people to compare his work to the real scene to prove the accuracy he was able to accomplish. The style quickly spread and became standard practice. It would remain a preferred method of achieving accuracy until the 19th century—hundreds of years after Brunelleschi's tests in 1415-1420.

Brunelleschi’s attitude may have won him the commission for the Dome of Florence. 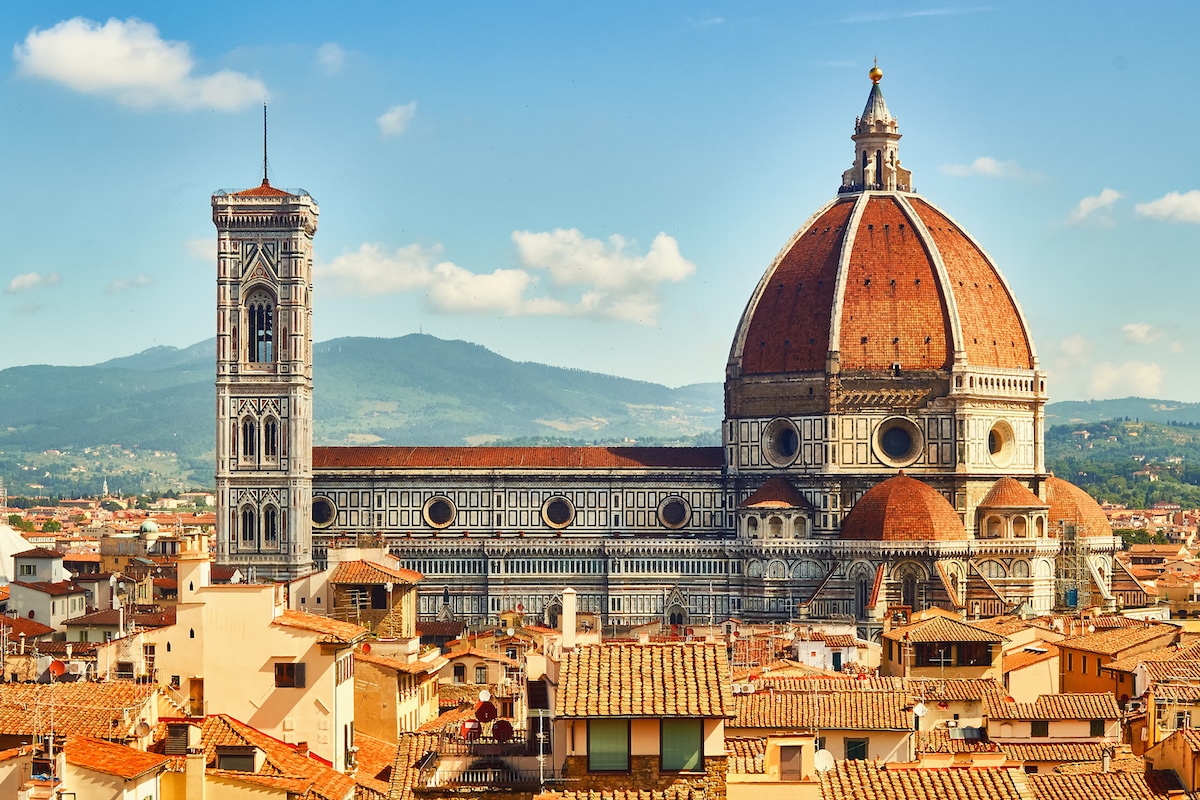 The task of completing the Dome of Florence was extremely difficult. The area for the dome was an octagon and could not be completed with the typical semi-circle shape. It also was an uneven octagon, so there was no true center and no central support could be used to facilitate its construction. Brunelleschi was positive that he had a solution, but he was extremely cautious about sharing his plan and feared that someone would steal his idea.

One popular story tells us that though Brunelleschi refused to share his drawings, he finally convinced the jury by using an egg to convey his argument. Brunelleschi said he would share his long-awaited plans if they could pass his simple test: make an egg stand up straight on the table. When no one was able to solve the riddle, he smashed the rounded bottom of the egg helping it to stand upright as he asked. The jury obviously complained that this was unfair and that they could have done that themselves if they knew it was allowed. Brunelleschi explained that they could also design the Dome of Florence if they also had the knowledge only he possessed. This riddle allegedly convinced the that though he had no architectural training, he would be able to complete the dome.

An alternative version of the stories describes that the jury did not actually believe that Brunelleschi could do it and that they considered him a “buffoon and a babbler.” Regardless of which story is more accurate and which you believe, we can almost know for certain that Brunelleschi's attitude helped win him the commission.

Brunelleschi may have turned to architecture after bruising his ego in a sculptural competition. 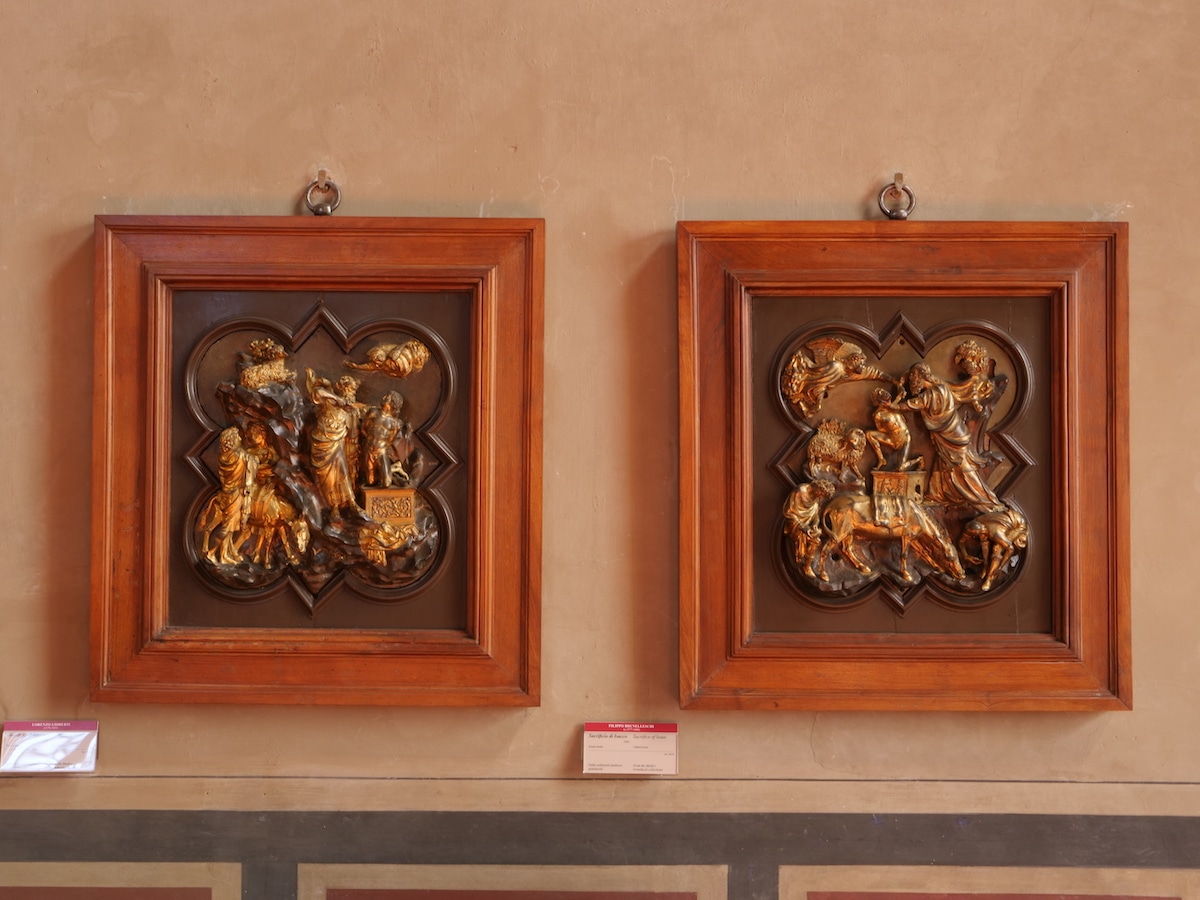 Brunelleschi, like many legendary creatives in history, had an arch-nemesis. Lorenzo Ghiberti was a rival metal worker trained as a goldsmith and sculptor like Brunelleschi.

In 1401, Florence held a competition for new bronze doors to the Florence Baptistry. Brunelleschi and Ghiberti both submitted an entry for the competition in the form of a single bronze panel depicting the Sacrifice of Isaac—a Bible story where God tests Abraham by asking him to kill his only son Isaac. Both entries were beautiful examples of each artist's skill and the jury was unable to make a decision. They asked both competitors to collaborate on the project, but Brunelleschi refused and therefore forfeited the competition. He later began focusing mostly on architecture and his theory of linear perspective.

The people of Florence were emotionally invested in the construction process. 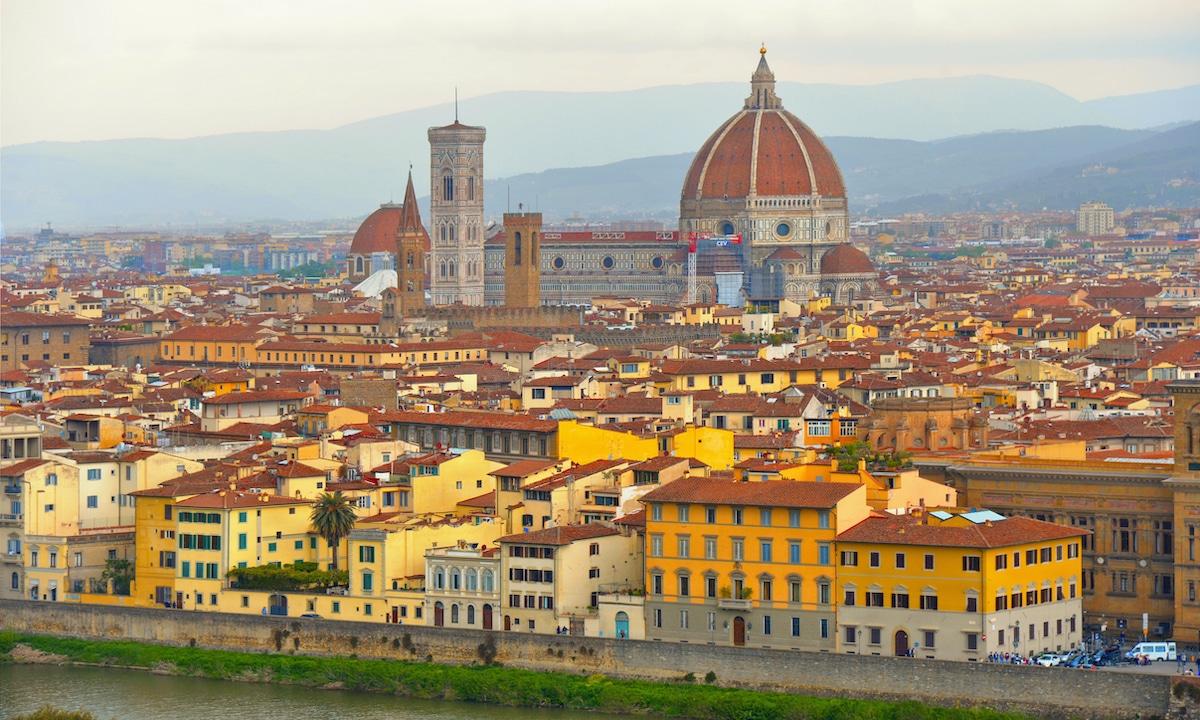 Before the competition and Brunelleschi's bold claim that he could easily fix the Dome of Florence, the cathedral remained unfinished for many years with no concrete plans on how to enclose it. This is why when work started on Brunelleschi's vision, the people of Florence were excited.

As the dome steadily grew over the sixteen years it was under construction, Florence eagerly awaited its completion and watched the incredible inventions Brunelleschi designed to complete the project. The best example of how people were aware of the process is that citizens used the construction as a way of marking time. Plans were made to complete jobs or fulfill promises “before the Dome is covered.”

The Dome of Florence inspired the adoption of an iconic local dish, a beef stew called “Peposo.” 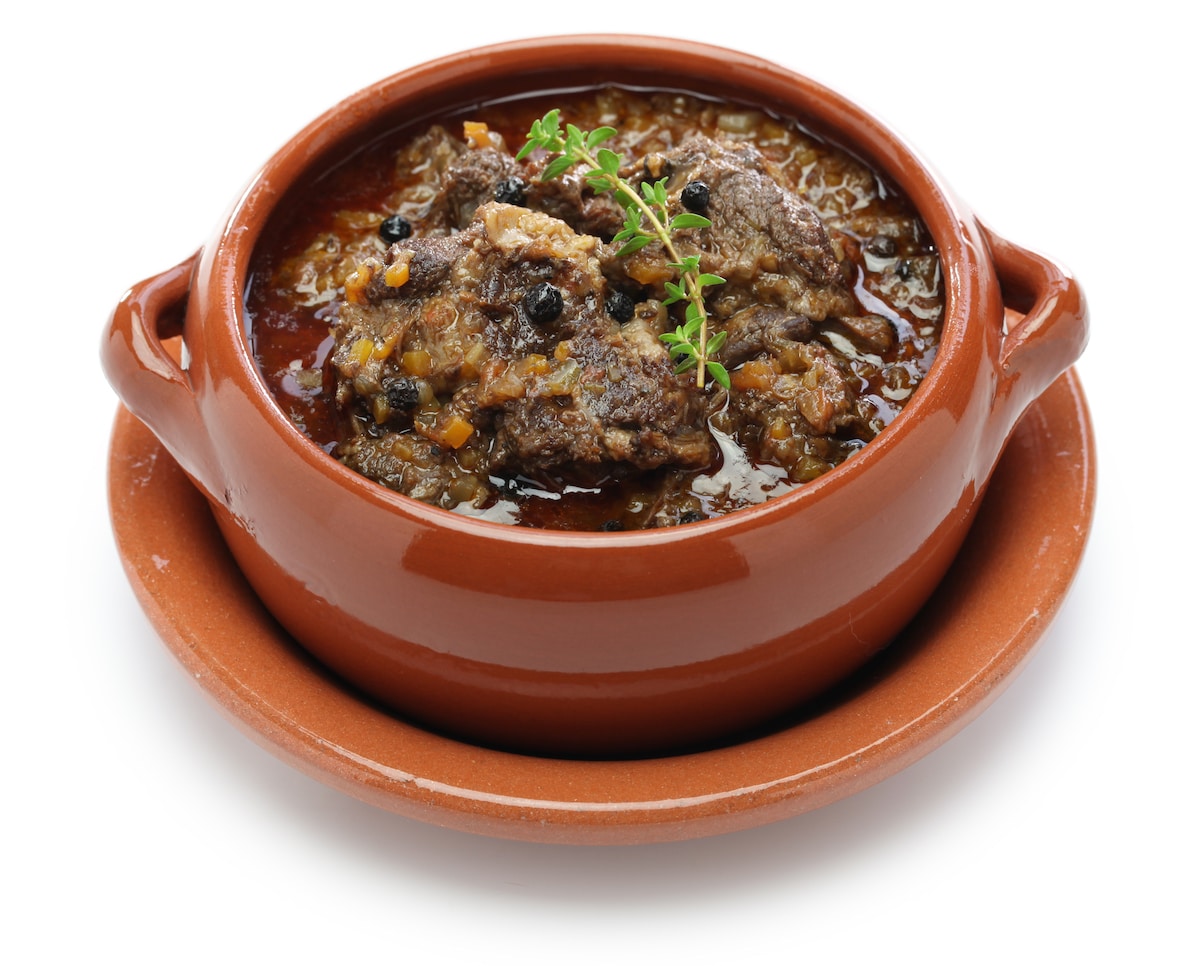 Aside from his ox-powered device to lift construction materials, one of Brunelleschi's other construction tools was a massive furnace that craftsmen used to bake terracotta tiles for the dome. With so many workers actively on-site for this project, it was difficult to feed everyone. The story goes that tile-makers made a simple dish of cheap meat, red wine, peppercorns, and garlic that was cooked in a large terracotta pot. This beef stew, called “Peposo,” was cooked along with the tiles and shared with the workers. Some accounts say that Brunelleschi himself brought the dish to Florence. Either way, the staple food for workers on the Dome of Florence became a traditional food for the entire city and remains extremely possible to this day.

Brunelleschi’s Dome remained the widest vault until the 20th-century. 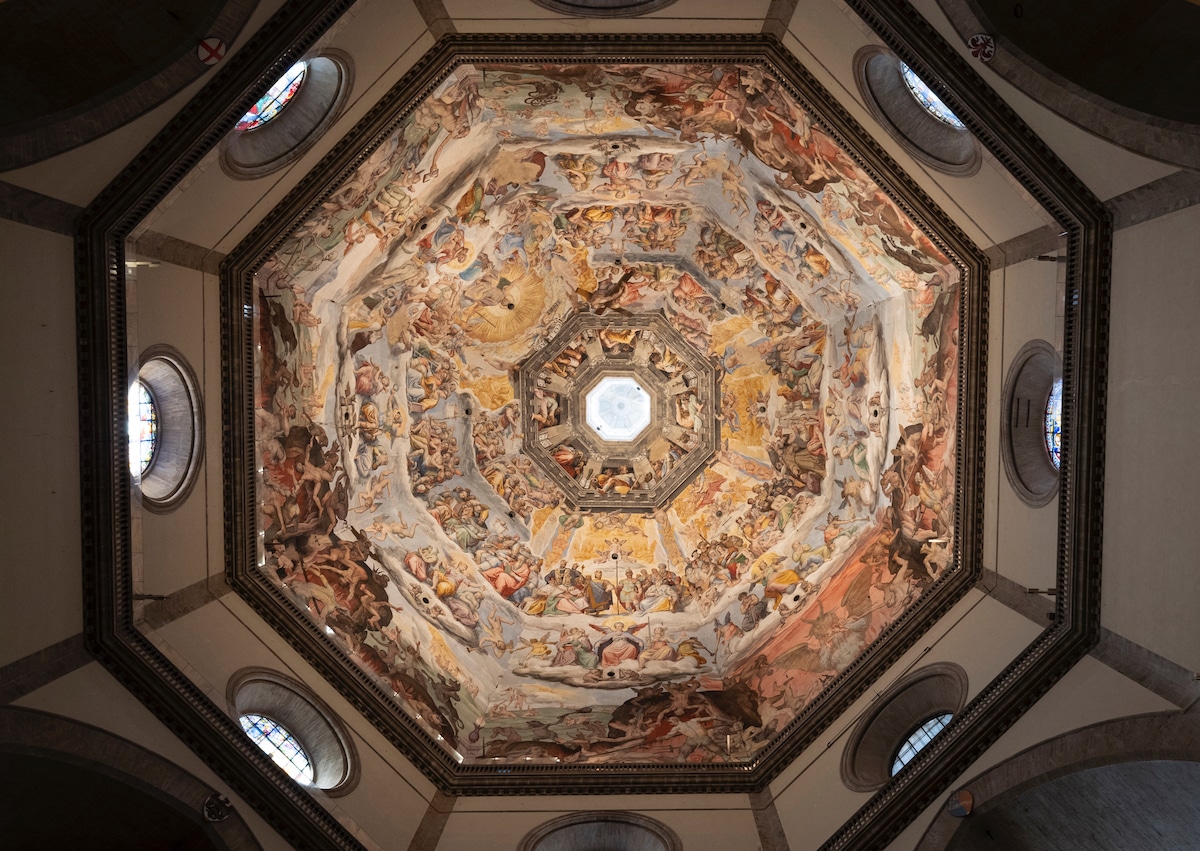 You may have already heard that Brunelleschi’s Dome is still the tallest brick dome in the world. It also remained the widest vault of any kind until the 20th century when more modern materials were used.

There was not enough wood in all of Tuscany to complete a traditional dome. 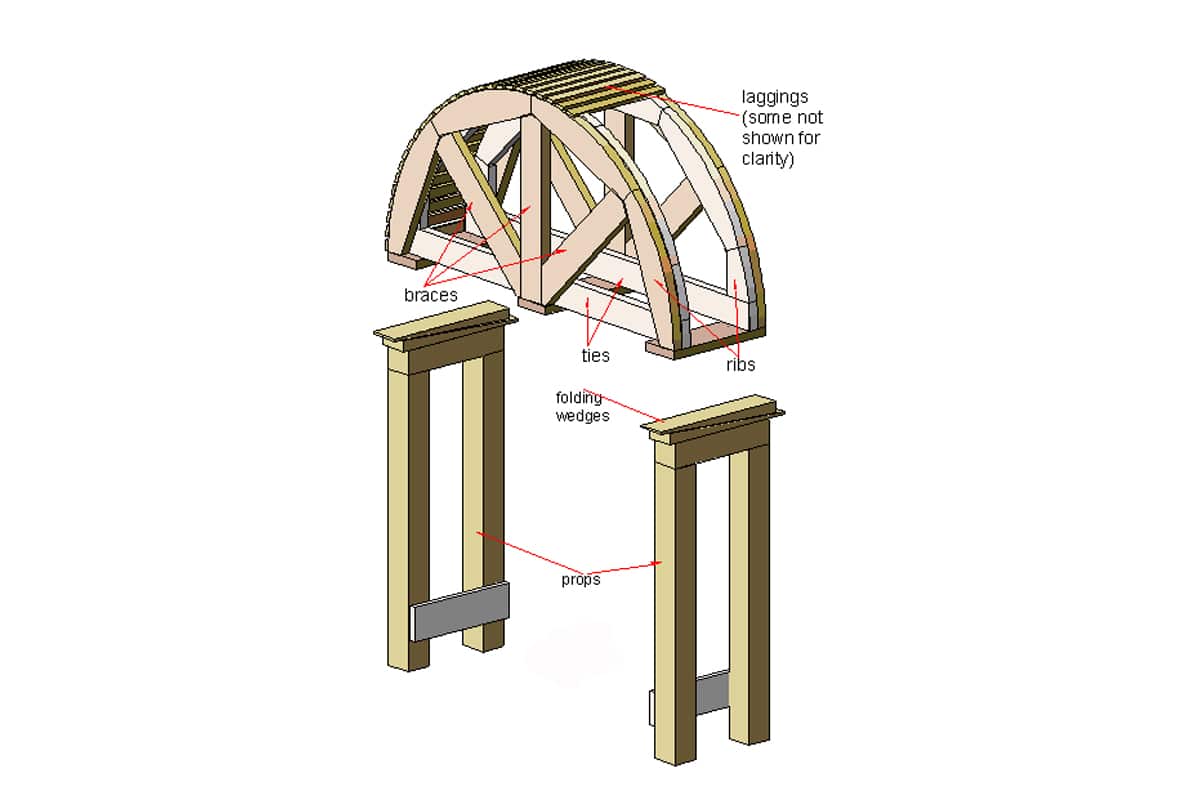 Domes were traditionally built using a process called arch-centering which required a large amount of wood. One of the most convincing aspects of Brunelleschi's design was that he claimed to not need arch-centering. Had Brunelleschi's Dome been completed using this technique, it would have required more wood than was available in all of Tuscany at the time.

The drum of the dome was unfinished when Brunelleschi died and remains unfinished to this day. 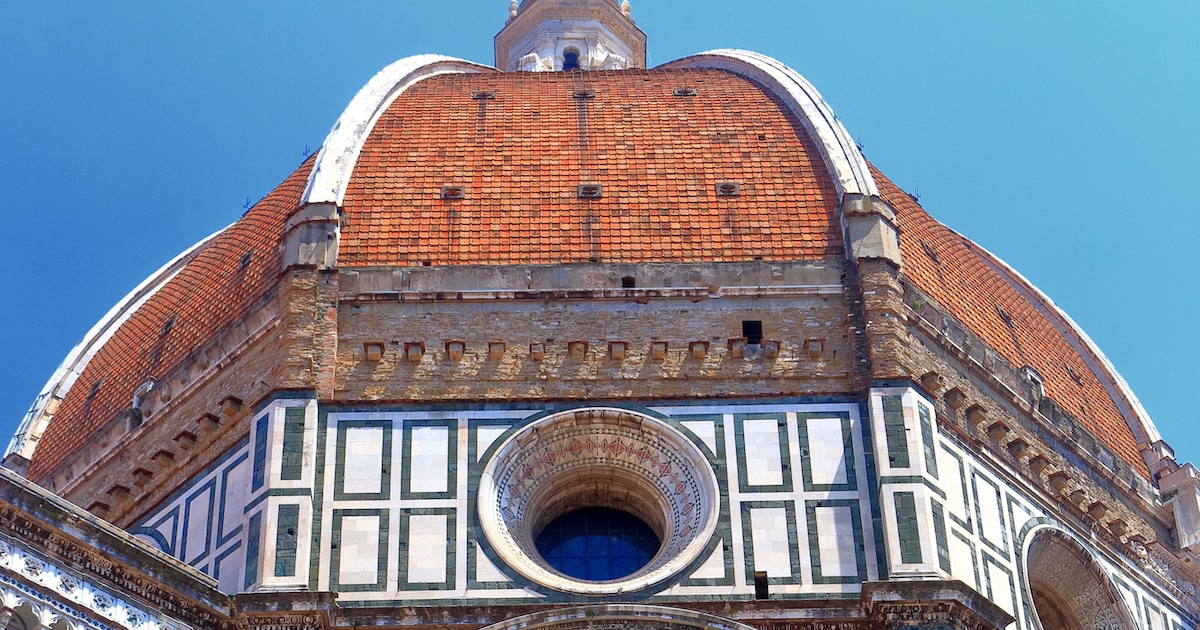 Did you know that the iconic Florence Cathedral is still unfinished? Brunelleschi died in 1446 leaving pieces of the project for a future designer. A competition was eventually held almost 100 years after his death and attracted many competitors, including Michelangelo. Four architects were eventually chosen for the project but all abandoned the work except for one: Baccio d’Agnolo.

The remaining architect worked diligently on the project until harsh criticism was publicized about his work. The best known is Michelangelo’s comment that it resembled “gabbia dei grilli,” or a cage for crickets. D’Agnolo left his work at the Florence Cathedral and the remaining work was never picked up again.

Brunelleschi not only designed a revolutionary dome, but he engineered custom machines needed to build it as well. 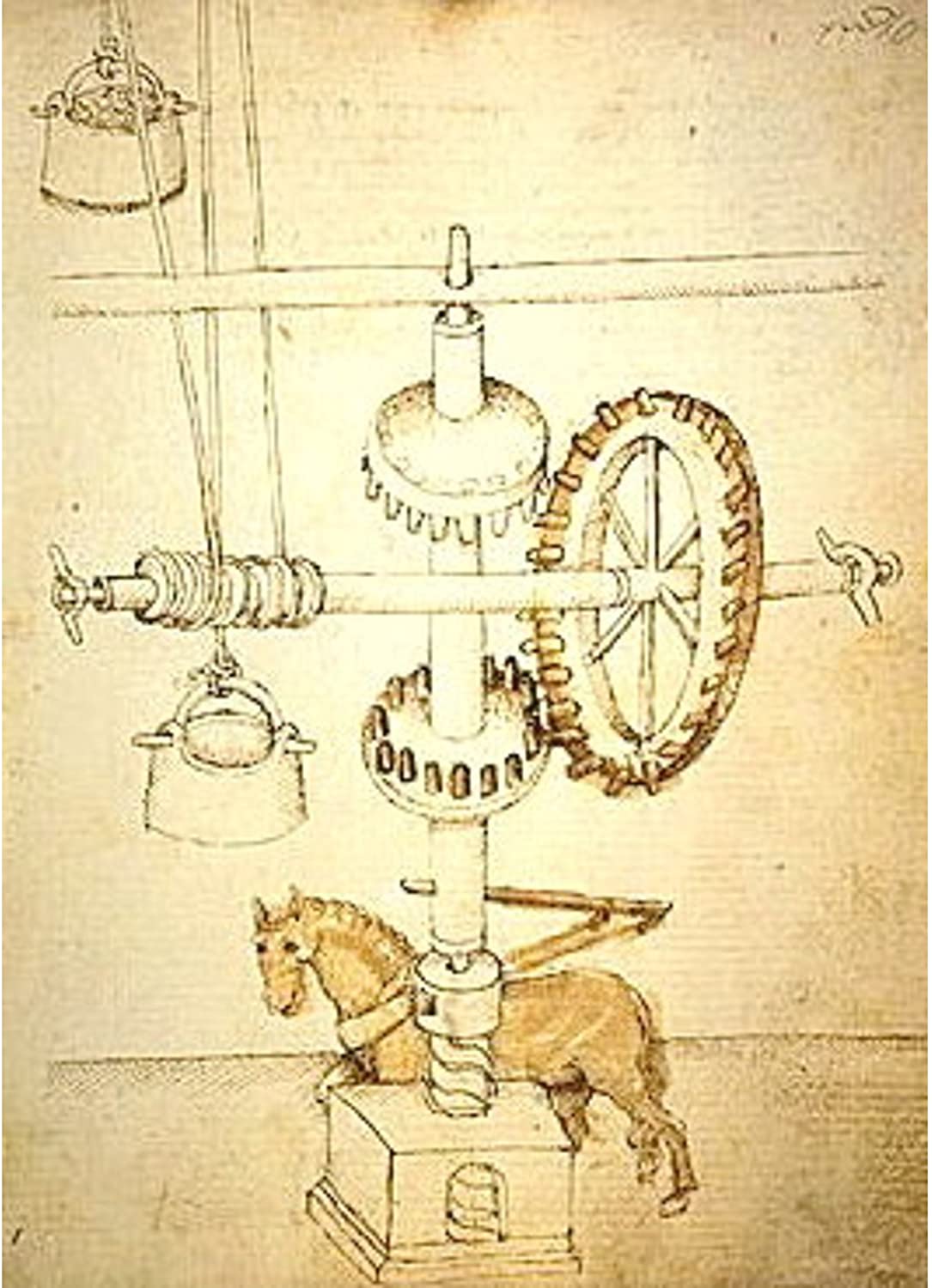 Brunelleschi was a true inventor who proved himself able to account for new issues and challenges as they arose. As he tackled the difficult task of completing the Dome of Florence, Brunelleschi sometimes needed to find efficient ways of handling the construction process for certain tasks.

Though there were no mechanical cranes at the time, heavy materials were sometimes lifted using an exercise wheel powered by a human walking in the structure. Brunelleschi needed a more efficient system that would generate more power and help the materials achieve greater heights. To meet this need, he designed a new machine that used oxen walking in a circle connected to a three cogged wheel system that could bring the objects up or down without requiring the oxen to change direction.

We still don’t completely know how Brunelleschi built his dome. 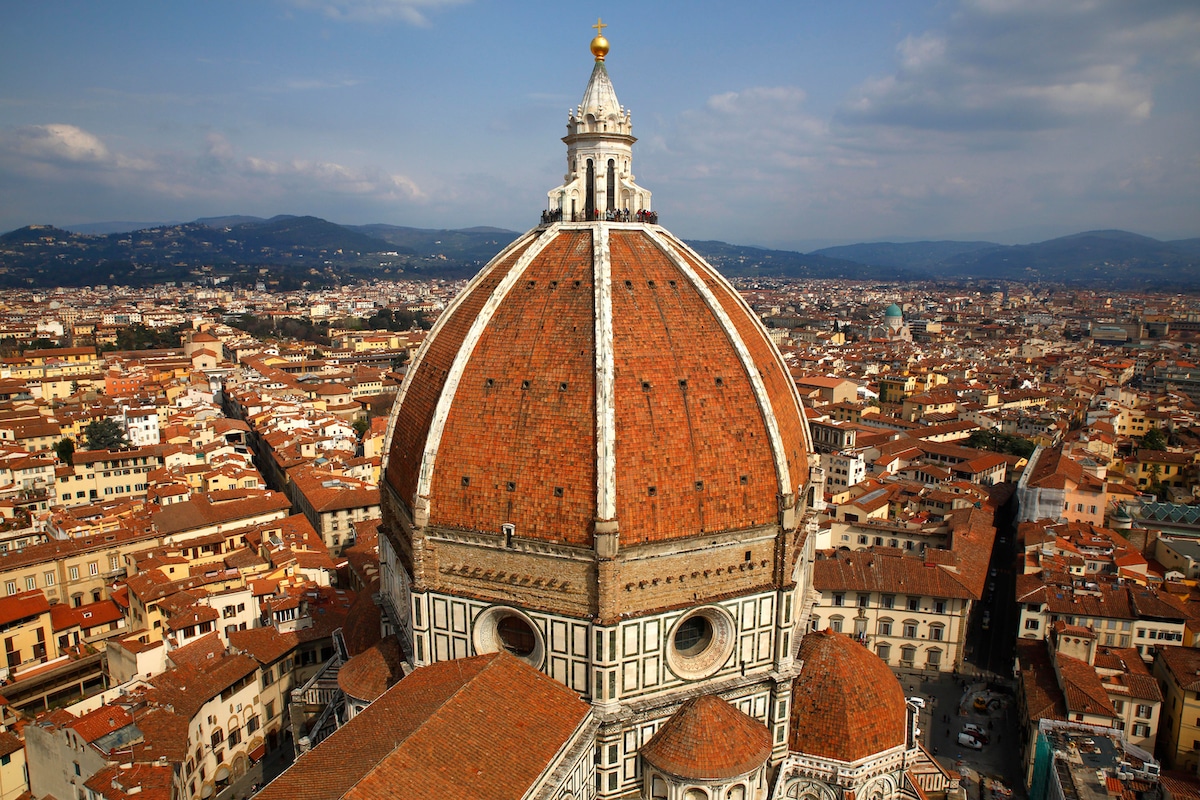 Though this is a generally well-known fact, it is still probably the most impressive piece of information to end on. This does not mean that we are no longer capable of creating the dome with modern technology—though it would be difficult for a modern project to be approved with such an ambitious goal. It simply means that since Brunelleschi did not leave records of his construction process, we will never be completely sure how it was completed; we just know some of the possibilities.

We know that Brunelleschi’s scheme included not one, but two domes. They were connected by massive brick arches and interlocking rings of stone and wood. The brickwork was able to support itself in part due to the herringbone pattern Brunelleschi used where vertical bricks acted as supports to horizontal bricks. The main question is this: How did Brunelleschi get his brickwork so perfect? The probable answer is through some kind of rope system—perhaps in conjunction with wooden formwork—that kept linework even across the whole project.

Though we will always have questions about Brunelleschi and the details about the dome’s construction, our knowledge about Florence Cathedral’s “crown jewel” is more than enough to know Brunelleschi is a master architect.

How many facts did you know? Share
Like My Modern Met on Facebook
Get Our Weekly Newsletter
Become a
My Modern Met Member
As a member, you'll join us in our effort to support the arts.
Become a Member
Explore member benefits