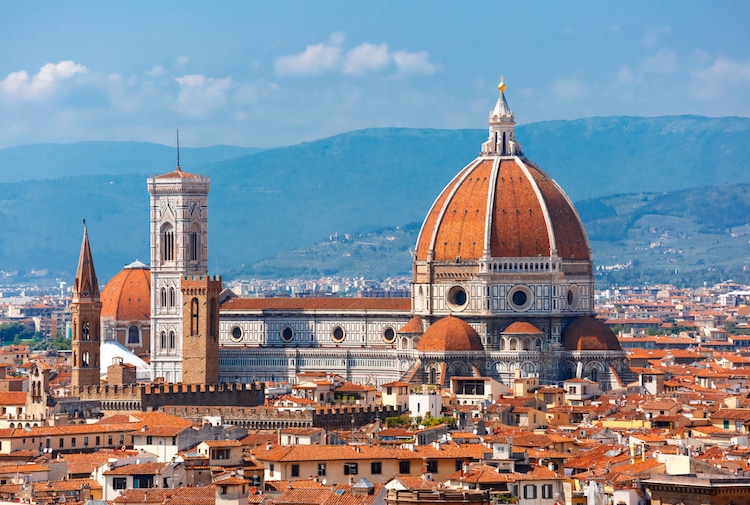 From its scarlet red dome to its beckoning bell tower, the Santa Maria del Fiore is an architectural gem. Also known as the Florence Cathedral, it is one of the most significant—and most visited—landmarks in Italy and the fourth largest church in Europe.

At first glance, the Florence Cathedral may appear to be one vast feat of architecture, but it is actually made up of a few different components. Construction on it began in 1296 in the Gothic style, but the project spanned several centuries and blended both 15th century Renaissance and 19th century Gothic Revival elements into its design.

To help you navigate such an imposing structure, it's helpful to learn about the key elements, including the bell tower (campanile in Italian), the dome (or duomo), and the façade.

Like other monumental buildings of the time, the Florence Cathedral passed through many hands, and in effect, became a collaboration among several prominent Italian figures, including Giotto and Brunelleschi. As a result of their efforts, the structure is an icon of the Tuscany region and an important part of the UNESCO World Heritage Site. It's visited by thousands of tourists each year.

Here, we explore the fascinating architecture of Florence Cathedral by examining its three key elements.

Giotto's Vision for the Bell Tower 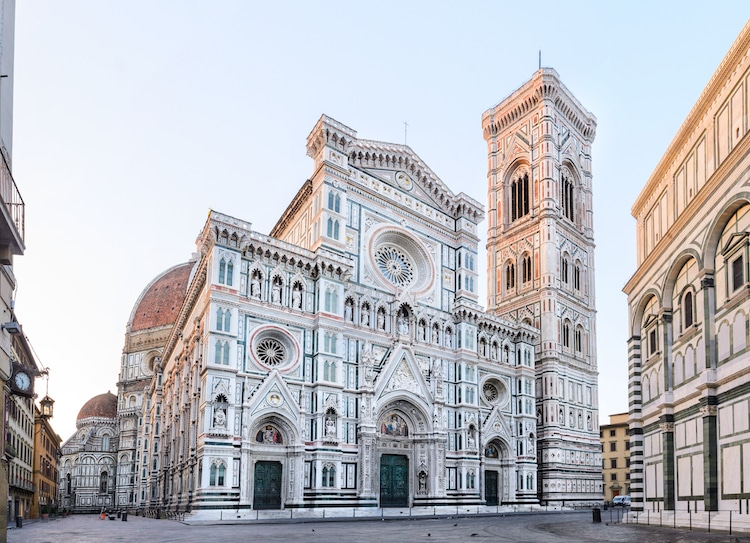 Before the Florence Cathedral was erected, an ancient, 4th-century church called Santa Reparata stood in its place. After hundreds of years, however, the building was falling apart, and the city council of Florence sought an architectural plan that could accommodate a growing population. Then, in 1294, architect and sculptor Arnolfo di Cambio (c. 1232-1302) submitted the plan for Santa Maria del Fiore. Its ambitious design proposed a large octagonal dome and wide nave that would require 142 years of construction.

During this time, Di Cambio died and the project was passed through several other hands, including the Proto-Renaissance painter Giotto (c. 1267-1337). The 67-year-old artist was named Master of the Works in 1334 and focused his efforts on the bell tower. 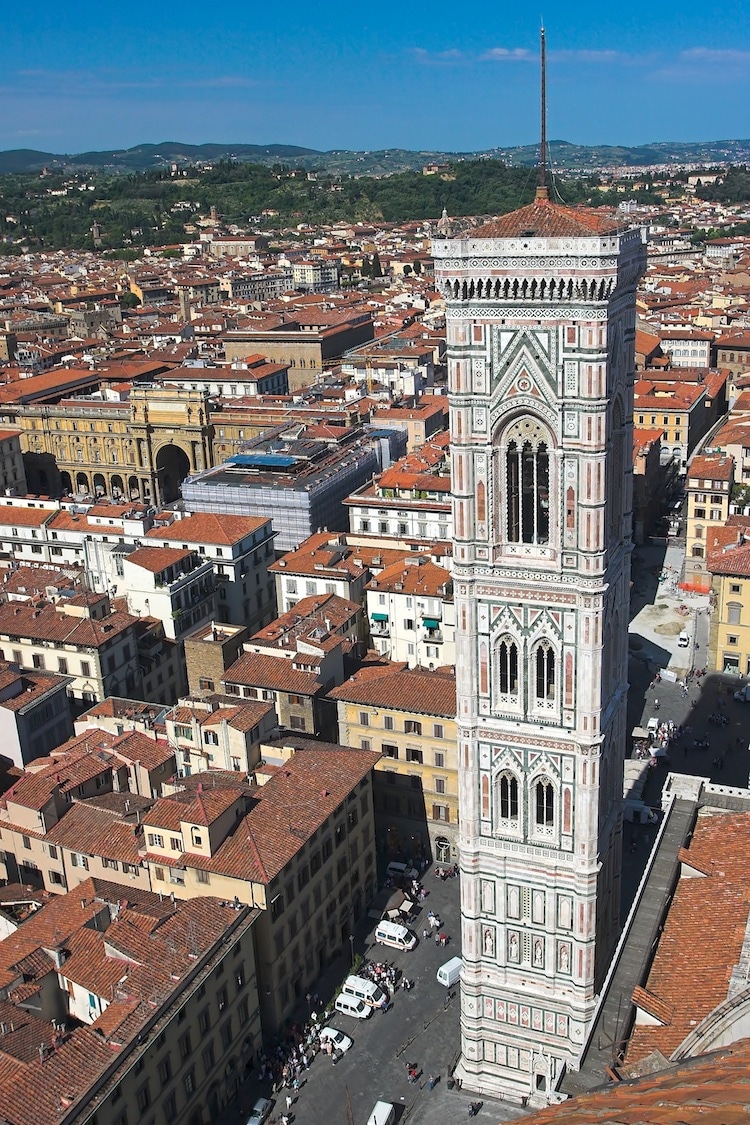 Giotto's bell tower is the magnificent beacon which overlooks the Florence Cathedral. It is a free-standing building that is located adjacent to the Basilica of Santa Maria del Fiore and the Baptistry of St. John.

When Giotto took on the project, he was determined to remain faithful to the polychrome style that Di Cambio employed in the rest of the cathedral—in addition to his own painterly aesthetic. Most noticeably is the geometric arrangement of different colored marble. Giotto imported material from the surrounding towns, including white marble from Carrara, green marble from Prato, and red marble from Siena. 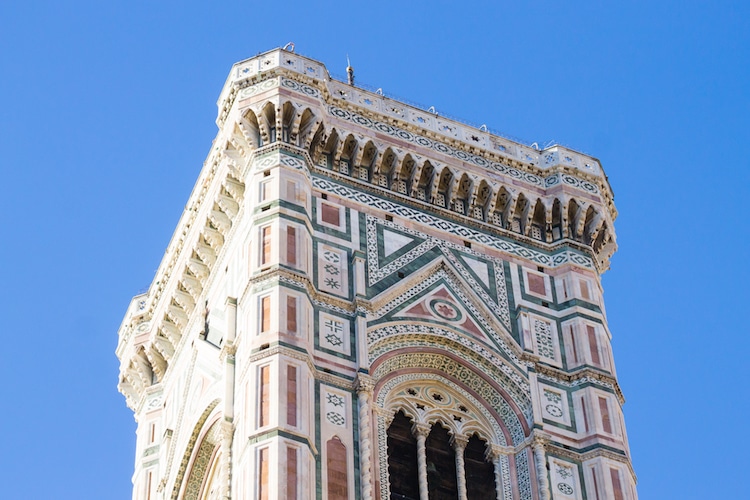 Unfortunately, the construction of the bell tower was stopped after the first floor, as Giotto died in 1337. A few years later, the position of Master of the Works was assigned to sculptor and architect Andrea Pisano (c.1290-1348), who had received fame for his design of the Baptistery's South Doors. Pisano oversaw the construction of the lozenges—diamond-shaped panels—depicting allegorical representations, and eight tall niches on each side of the bell tower. These would later house sculptures.

The bell tower was delayed again at Pisano's death in 1348 and the outbreak of the Black Plague. He was succeeded by Tuscan architect Francesco Talenti (c. 1300-1369), who eventually realized Giotto's vision in 1359. The completed bell tower measures 85 meters in height (nearly 279 feet) and contains 412 steps. 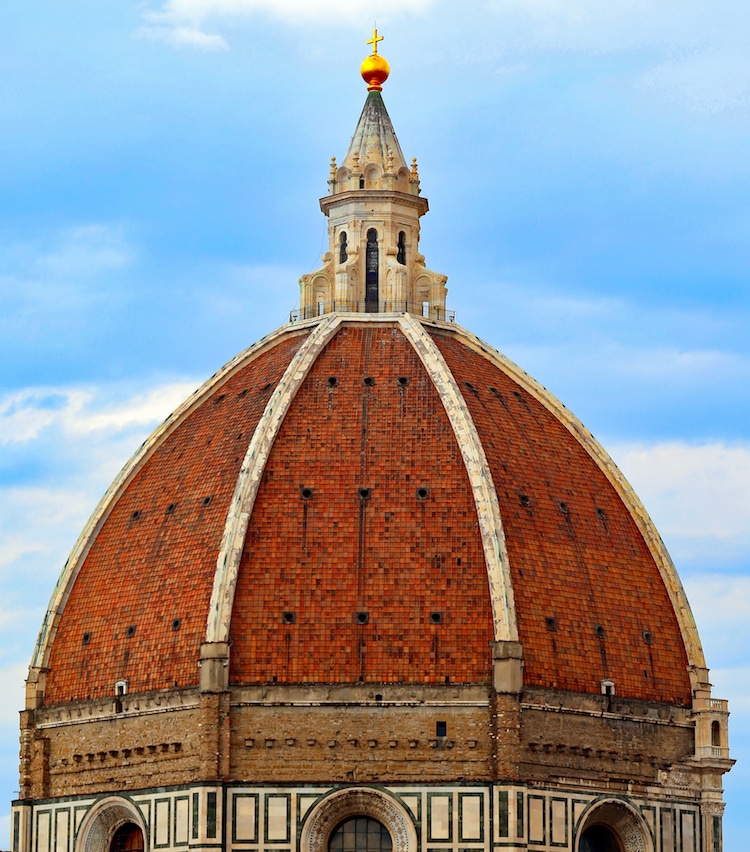 Even when Florence was leading the way in the Italian Renaissance at the beginning of the 15th century, Santa Maria del Fiore still lacked its dome. Although Di Cambio provided a design and model for the brick structure in 1296, its massive size and lack of buttresses provided a challenge for his successors. This is because, by the 1300s, Italian Renaissance architects rejected the use of buttresses, as those represented the outdated Medieval Gothic style, which was viewed as clunky and unsightly.

Instead, designers working on the Florence Cathedral sought classical monuments for ideas on how to distribute the dome's weight. Florentine engineer and architect Filippo Brunelleschi (c. 1377-1446) studied the Roman Pantheon and its large dome for inspiration. 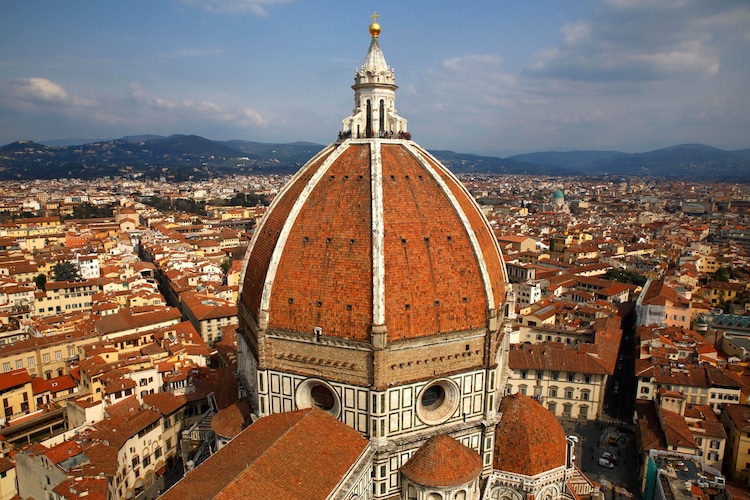 His solution was to embed a set of four stone and iron chains and a fifth made of wood within the dome to hold it together. Then, he laid down the bricks in a herringbone pattern to carefully transfer their wight to the inner structure of the octagonal dome. This ingenious design could not have been employed, however, without Brunelleschi's invention of hoisting machines to lift the 37,000 tons of material onto the cathedral. Although the schematics for these machines have been lost, Renaissance contemporaries like Giorgio Vasari and Leonardo da Vinci mention their lasting influence. 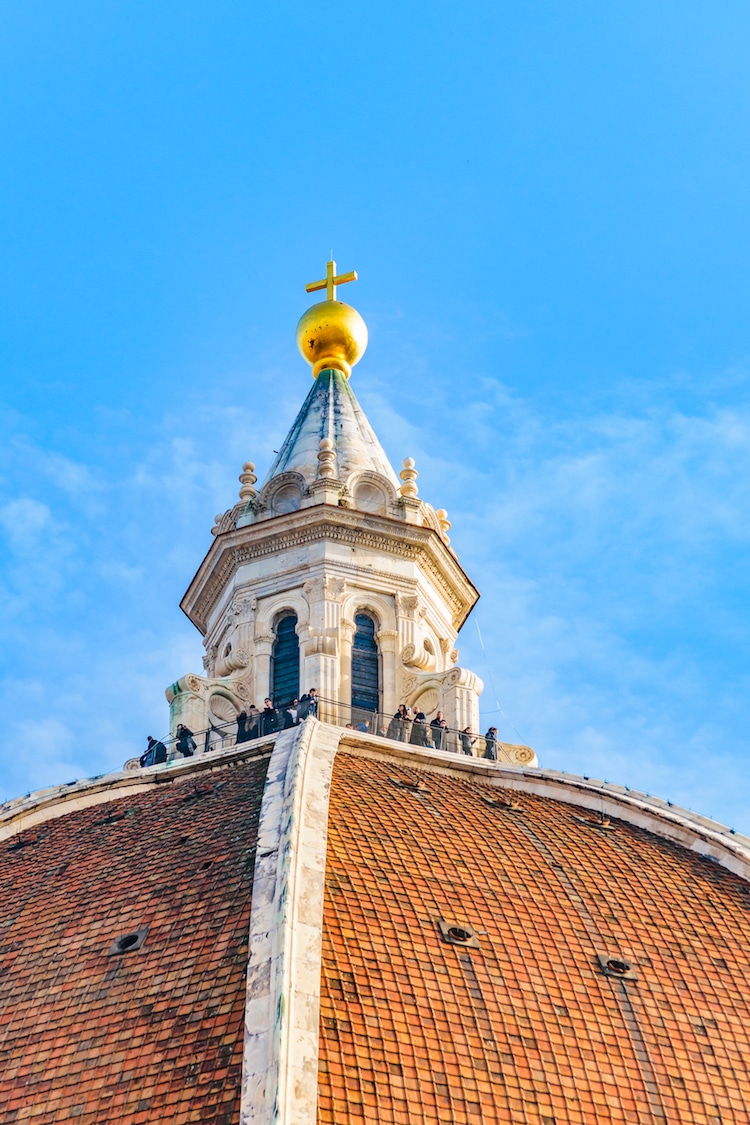 After 16 years of construction, Brunelleschi completed the dome in 1436 but still sought to add a lantern to the top. This architectural detail was completed by his friend and fellow architect Michelozzo di Bartolomeo Michelozzi (c. 1396-1472) in 1461. Several years later, Brunelleschi's Dome was given its last embellishment by goldsmith Andrea del Verrocchio (c. 1435-1488) who added a gilt copper ball and cross to the top of the lantern in 1469.

The dome remains the largest brick dome ever constructed. 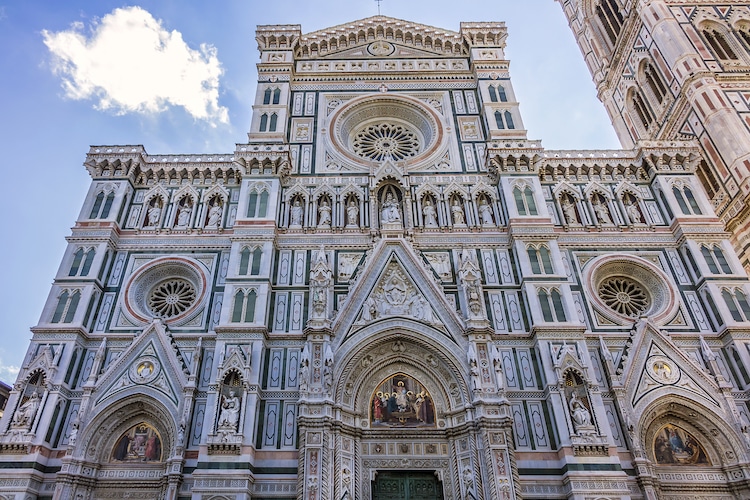 Although the Florence Cathedral was more or less completed during the Renaissance, the façade was still bare by the 19th century due to centuries of disagreements. In 1871, the city hosted a competition to determine its design which was won by architect Emilio de Fabris (1808-1883). His plan maintained the same white, green, and red marble color scheme as the rest of the cathedral while still containing more elaborate details, like the exquisite rose windows, which became popular again in the Gothic Revival style.