Throughout art history, the concept of love has attracted artists from all walks of life. Depicted in different kinds of styles and rendered in a myriad of mediums, the amorous concept continues to captivate viewers time and time again.

While there are countless alluring examples of love in art, we've compiled a collection of 5 pieces that stand out from the rest. Whether highlighting a marble kiss, a glistening gold embrace, or even big block letters, these heartfelt masterpieces prove that art and love are a perfect match.

Here are 5 of the most renowned romantic paintings and sculptures and forms of love art throughout art history. 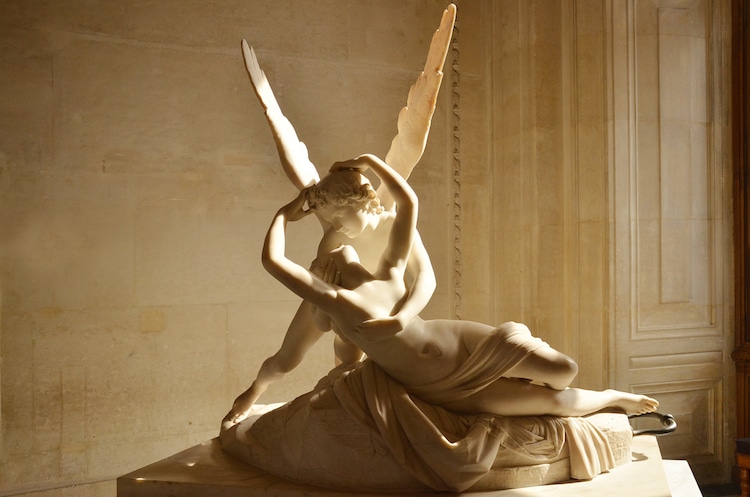 Psyche Revived by Cupid's Kiss is one of Neo-Classicism's most beloved sculptures. Inspired by the love story of Cupid, the Roman god of love (adapted from the Greek Eros), and Psyche, a human-turned-goddess, this marble masterpiece was carved by Italian sculptor Antonio Canova in 1793.

The piece depicts the touching moment Psyche—who was put into a deep, death-like sleep after opening a forbidden box— is awakened by a kiss from Cupid, her husband. Canova skillfully captures the heightened and humanist emotion of the scene by paying special attention to the the lifelike expressions and intimate positioning of the figures.

“Cupid lifts his beloved Psyche in a tender embrace, his face close to hers,” the Louvre, where the piece is currently housed, explains. “Psyche lets herself sink slowly backwards, languorously taking her lover’s head between her hands.”

The Kiss by Gustave Klimt 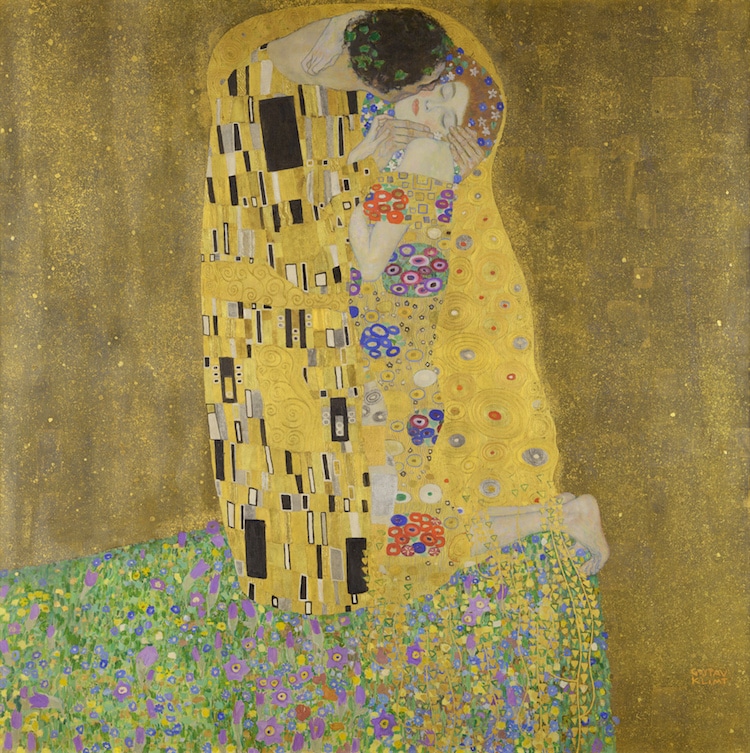 Austrian artist Gustav Klimt painted The Kiss at the height of his Golden Phase. During this luminous period, Klimt experimented with his work, crafting avant-garde paintings with pronounced planes, intricate patterns, and delicate detailing made of gold leaf. The Kiss embodies this ethereal approach, and highlights another one of Klimt's interests: portraying intimate subject matter.

The Kiss shows a loving couple mid-embrace. As they kneel in an otherworldly garden, the man leans in to kiss his partner, delicately cradling her face and running his hand through her flower-embellished hair. With her eyes peacefully closed, the woman wraps her arms around him, accepting and anticipating her lover's kiss.

Klimt never disclosed the identities of the figures. However, today, the couple is widely believed to have been inspired by the artist and his companion (and perhaps lover) Emilie Flöge, a Viennese fashion designer. Much like the painting itself, their relationship is shrouded in a glittering mystery. 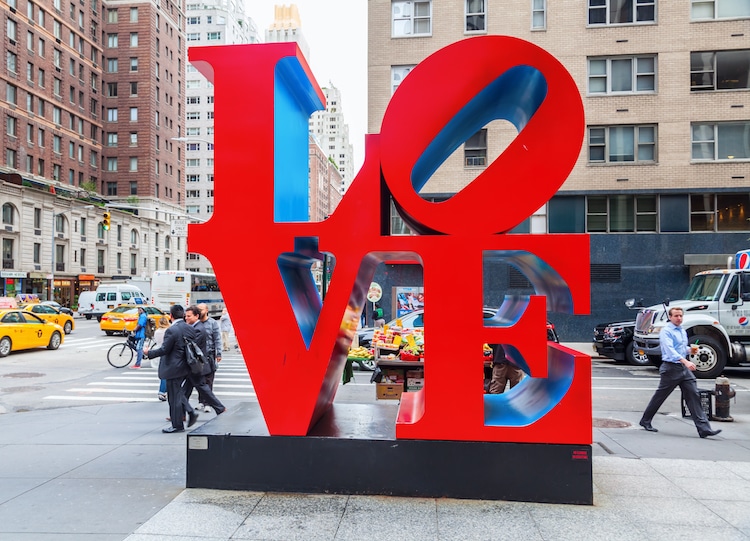 Since 1970, Robert Indiana's large-scale Love sculptures have popped up in cities around the world. While these Pop Art pieces have taken on a romantic meaning, their original intention was less Valentine's Day-related and more in the Christmas spirit.

In fact, Indiana came up with the familiar design—characterized by a stacked set of seraph letters spelling out the word, “LOVE”—for the Museum of Modern Art's holiday card. Therefore, it is not surprising that the motif's origins are actually rooted in Indiana's religious upbringing. “I, as a child, was raised as a Christian Scientist,” Indiana explained in a letter to an art collector, “and the world LOVE was indelibly imprinted in the mind, for there is that slightly different phrase, ‘God is Love,' on every front wall of every one of Mary Baker Eddy’s houses throughout the world.”

Over the years, Indiana's sculptures have taken on a lovey-dovey life of their own. While the late artist had a love-hate relationship with the wildly popular series (he famously said, “It was a marvelous idea, but it was also a terrible mistake”), they will undoubtedly continue to inspire romantics for years to come.

In Bed, The Kiss by Henri Toulouse-Lautrec 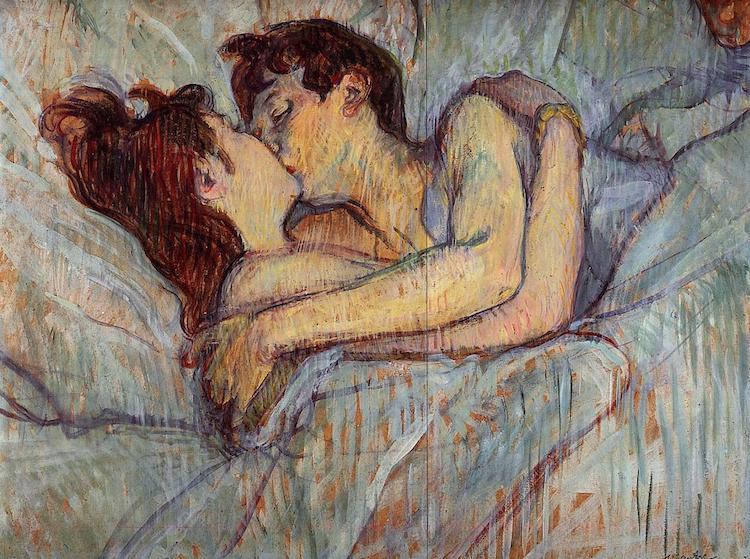 Post-Impressionist painter and graphic designer Henri de Toulouse-Lautrec is known for his posters, prints, and paintings of turn-of-the-century Paris. While most of these works capture the City of Love's spectacular nightlife, some offer a glimpse into more intimate situations, like In Bed, The Kiss.

Created in 1892, this oil painting shows two women passionately kissing in bed. The pair are most likely Parisian prostitutes, one of Toulouse-Lautrec's favorite and most visited artistic subjects. Like his other works set in brothels, In Bed, The Kiss offers an intimate look at the lives of these women. What sets this piece apart, however, is the inherent emotion of the scene, which the artist emphasizes with his characteristically energetic brushwork and an expressive color palette.

Toulouse-Lautrec also explored brothel life in his Elles portfolio, a collection of lithographs. Though celebrated today, these pieces were not well-received during the artist's lifetime, as the public was not interested in “mundane intimacy.” The Museum of Modern Art explains: “Elles proved to be a commercial failure for its publisher—Gustave Pellet, who specialized in erotica—because it delivered not an exotic fantasy, but rather an intimate portrayal of women Lautrec knew firsthand and the milieu in which they lived and worked.”

The Kiss by Auguste Rodin 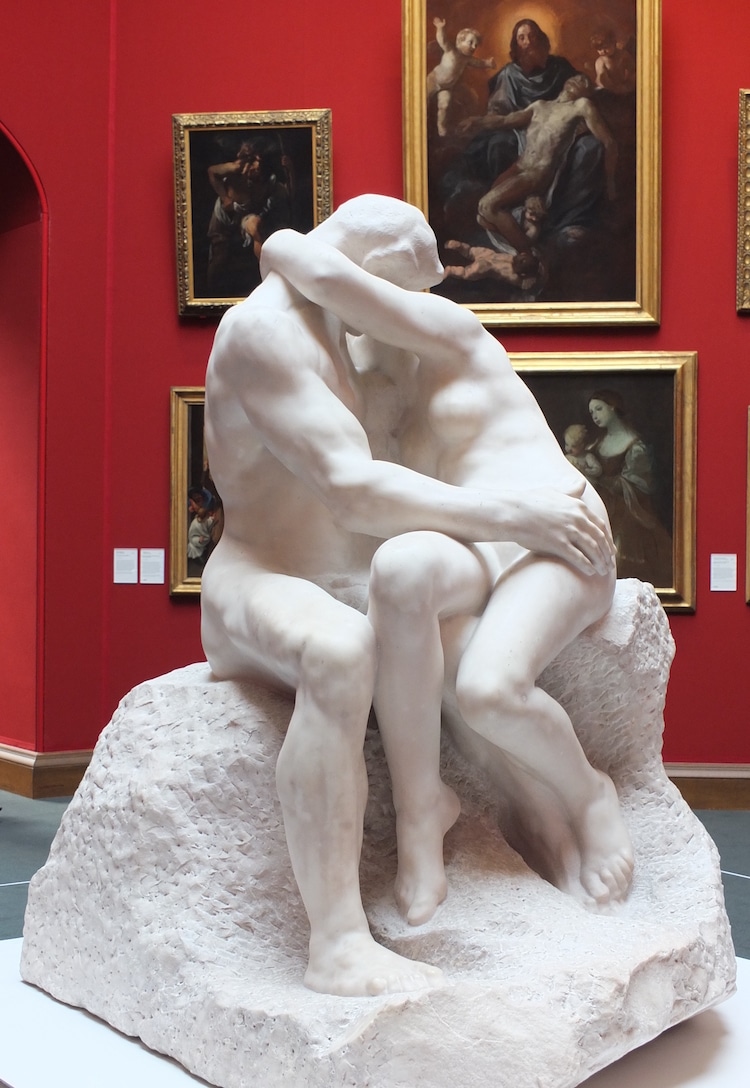 French sculptor Auguste Rodin completed The Kiss, a beautiful marble sculpture, between 1888 and 1898. With its “fluid, smooth modelling, [a] very dynamic composition and [a] charming theme” (The Rodin Museum), this work is one of modern art‘s most acclaimed sculptures.

It was intended to adorn the Gates of Hell, a double-door sculpture inspired by Dante’s Inferno. Because of this source, Rodin opted to include a relief showing Francesca da Rimini—a real-life 13th-century noblewoman whose tale was featured in Dante's Divine Comedy—in the throes of an affair with her brother-in-law.

After completing the sensual piece, however, Rodin deemed it “a large sculpted knick-knack following the usual formula.” He decided to exclude it from the doors' final design and instead adapted it—a decision that has given us the free-standing sculpture we know and love today.

Love art? Share
Like My Modern Met on Facebook
Get Our Weekly Newsletter
Become a
My Modern Met Member
As a member, you'll join us in our effort to support the arts.
Become a Member
Explore member benefits
Love art? 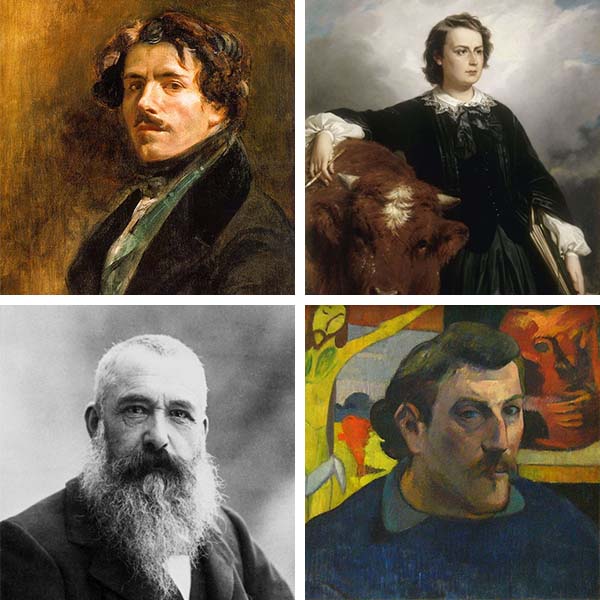