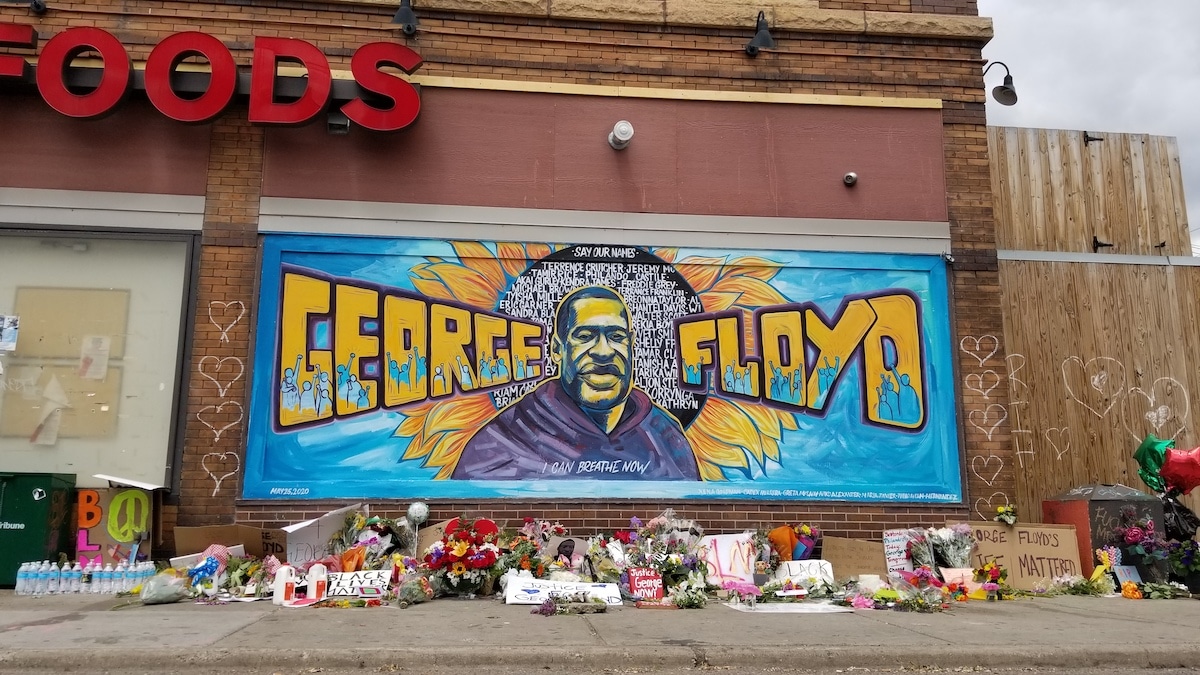 Around the world, street artists are using their skills to pay tribute to George Floyd. As Floyd's senseless death continues to fuel protests calling for an end to racism and police brutality, painted memorials for the 46-year-old have sprung up around the globe. These artists are picking up their spray cans and paintbrushes to lend their voices to the Black Lives Matter movement, often incorporating the names of other black victims of police violence.

Particularly poignant is the mural painted just days after Floyd's murder in Minneapolis at the intersection where his murder occurred. All four officers present at the scene have now been arrested, with former police officer Derek Chauvin—who kneeled on Floyd's neck for 9 minutes until he stopped moving—seeing his charges upgraded from third-degree to second-degree murder. The Minneapolis mural, painted by a collective of five artists, has now become a makeshift memorial for the Floyd.

Xena Goldman, one of the artists who worked on the Minneapolis mural, told My Modern Met, “It was important for us that no one ever walks through that intersection without realizing what happened there.” Across the United States and around the world, other artists have followed suit. From Los Angeles to Berlin, Dublin to Syria, different cities are seeing these tribute memorials pop up. Many incorporate Floyd's now-infamous words, “I can't breathe,” while others mix in the names of other victims of police brutality.

These murals are evidence that what happened to George Floyd is more than an American problem. In Syria, artists Aziz Asmar and Anis Hamdoun were moved to paint their mural of Floyd as a call for peace and love. They told a local newspaper that Floyd's death reminded them of Syrian civilians who were “killed by suffocation after the Syrian regime hit them with chemical weapons.”

Another memorial painted by Donkeeboy in Houston has personal ties to Floyd. The artist painted the mural at the request of a childhood friend of Floyd's and the work is located across the street from where he grew up. Floyd's friends and family gathered as the artist worked on the mural, trading stories and reminiscing about good times. Perhaps, in this way, the art can provide a cathartic outlet for those close to Floyd.

For some artists, taking their art to the public doesn't mean creating a painted mural. Artist Jammie Holmes took his work to the skies by having airplanes fly banners in Dallas, Detroit, Los Angeles, Miami, and New York. Each banner had a different phrase that Floyd uttered during his horrendous ordeal—including “My Neck Hurts” and “They're Going to Kill Me.” For Holmes, the installation was particularly personal as he states that he has also been subjected to police misconduct.

“This presentation is an act of social conscience and protest meant to bring people together in their shared incense at the inhumane treatment of American citizens,” Holmes wrote. “With this demonstration, I hope that people across the United States will use the outlets available to them to continue to demand change.”

Take a look at some of the moving memorials that have sprung up in George Floyd's honor and, to broaden your knowledge and understanding of the situation, read more about what you can do to ensure that these types of violent acts will stop occurring.

Street artists have been creating memorials to commemorate George Floyd and remind the public that police violence must end.

From Berlin to Syria, artists around the world are also paying tribute to Floyd and calling for an end to police brutality.

To make his statement, artist Jammie Holmes flew airplane banners over 5 cities with some of Floyd's final words.

A post shared by Library Street Collective (@librarystreetcollective) on Jun 2, 2020 at 3:30pm PDT