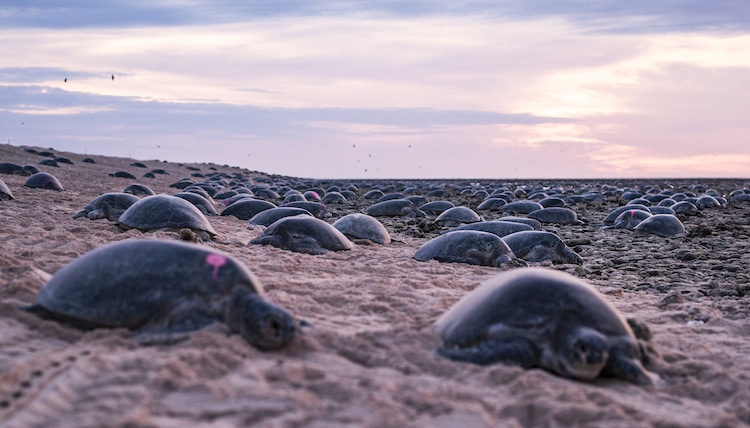 Technology has the incredible ability to make jobs easier for some people, particularly for scientists. And in some cases, this technology can also give us something beautiful. That's exactly the case in Australia, where drones captured the incredible migration of 64,000 green sea turtles migrating to Raine Island. As the world's largest green sea turtle rookery, it's a mecca for these endangered animals.

Scientists use the drones as a safe and effective way to survey the green sea turtles' population. The lovely side effect of this practice is that we're left with stunning video footage. Researchers prefer this method for tracking the green sea turtles as opposed to traditional methods that required them to paint the backs of turtles while they rested on the beach.

“Trying to accurately count thousands of painted and unpainted turtles from a small boat in rough weather was difficult,” said Dr. Andrew Dunstan from the Queensland Department of Environment and Science. “Using a drone is easier, safer, much more accurate, and the data can be immediately and permanently stored.”

Interestingly, the drone data has shown researchers that their previous numbers were off—and by quite a bit. “We're finding 1.73 times as many turtles with the drone and as we do when we directly compare with observer counts,” said Dr. Dunstan. “The team can now go back and adjust the historic population estimates.”

Though this is great news, green sea turtles are facing challenges, as their population is declining. This decrease in numbers is due to adults being hunted for their meat and eggs getting harvested, as well as turtles getting caught in fishing gear and a loss of habitat. The rookery on Raine Island, which is in the northern Great Barrier Reef, is flooded with the endangered species during the breeding season.

Interestingly, females tend to nest where their mothers did, which is perhaps one reason for the huge quantity of turtles that migrate there. Each turtle will lay anywhere from 100 to 200 eggs and cover them before returning to the water. After two months, the eggs will hatch and the baby turtles will make the treacherous journey from sand to sea.

Learn more about the challenges that are facing this endangered species and Raine Island.

Wowed by the video? Share
Like My Modern Met on Facebook
Get Our Weekly Newsletter
Become a
My Modern Met Member
As a member, you'll join us in our effort to support the arts.
Become a Member
Explore member benefits

Wowed by the video?