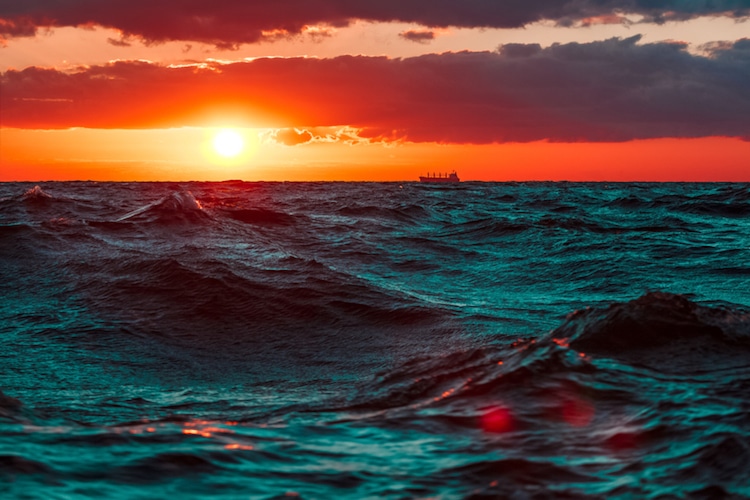 Millions of species inhabit the oceans, lakes, and rivers that are a fundamental part of our planet. As more and more awareness is being raised about how humans affect the ocean, it's also important to understand the true impact we're having on marine animals. We recently brought you the story of the vaquita, a small porpoise that is facing certain extinction. Unfortunately, the vaquita isn't alone in its plight, with numerous marine animals on the IUCN endangered species list.

By being more informed, we can take steps to reverse some of the damage done before these species reach the vaquita's critical point. And with heightened awareness about everything from ocean plastic to the impact chemicals in our sunscreen have on the ecosystem, we can begin to take steps to conserve these important animals.

Because every day should be World Ocean Day, we take a moment to reflect on just a few of the endangered marine animals around the world. The more you know, the more you can help.

Here are just 7 of the endangered marine species that need our help before their populations disappear. 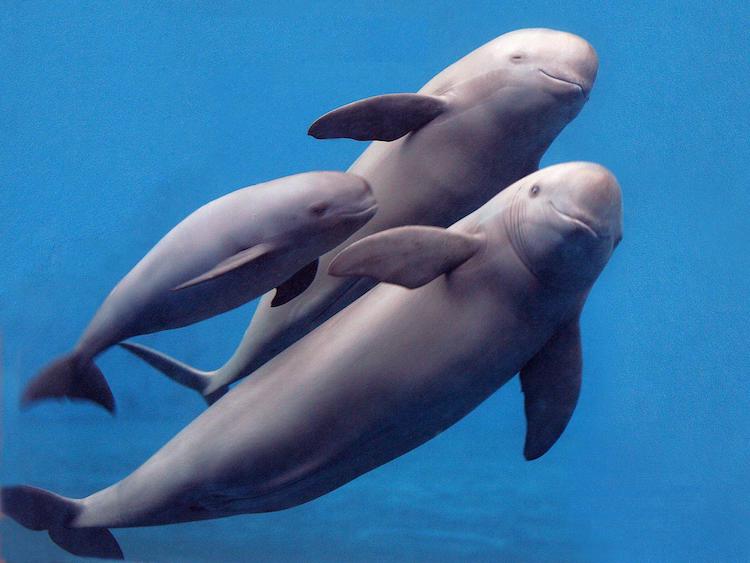 Asia's longest river used to be home to two freshwater dolphins, but with the extinction of the Baiji dolphin in 2006, only the Yangtze finless porpoise calls the river home. The Chinese government has been working with organizations like the Wolrd Wildlife Foundation and IUNC to help save the porpoise from extinction, as it is also on the endangered list. In fact, in 2014 the Chinese government granted the Yangtze finless porpoise the highest protection allowed under the law.

As the only known porpoise to live exclusively in fresh water, the Yangtze finless porpoise's habitat is limited to the western Yangtze River. Increased pollution and overdevelopment has stunted the porpoise's food supply, while illegal fishing gear has entangled many of these creatures and led to drowning. There are some porpoises in captivity and three breeding grounds in Japan, which have produced five births. Though only two of the five survived for a few years, there is hope that breeding in captivity can be successful.

Where do they live? Yangtze River

What can you do to help? Support the WWF, which has been reconnecting floodplain lakes along the river in order to allow migration and secure food supplies.

The smallest marine turtle in the world, the Kemp's Ridley sea turtle, has seen a sharp decline since an amateur video from 1947 showed 42,000 females nesting in a single day. The critically endangered Kemp's Ridley lives in shallow waters where they can feed on crab, mollusks, and jellyfish. Part of its misfortune came from egg overharvesting over the course of the last century. Though their nesting beaches in Rancho Nuevo have been protected since 1966 and changes to fishing gear have been implemented to leave them unharmed, the Kemp's Ridley sea turtle hasn't seen a population rebound.

Where do they live? Mainly the Gulf of Mexico, though some can be found along the Atlantic coast

What can you do to help? Don't purchase items made from sea turtle parts, which are often sold to tourists around the world. Also, you can donate to the Sea Turtle Conservancy. 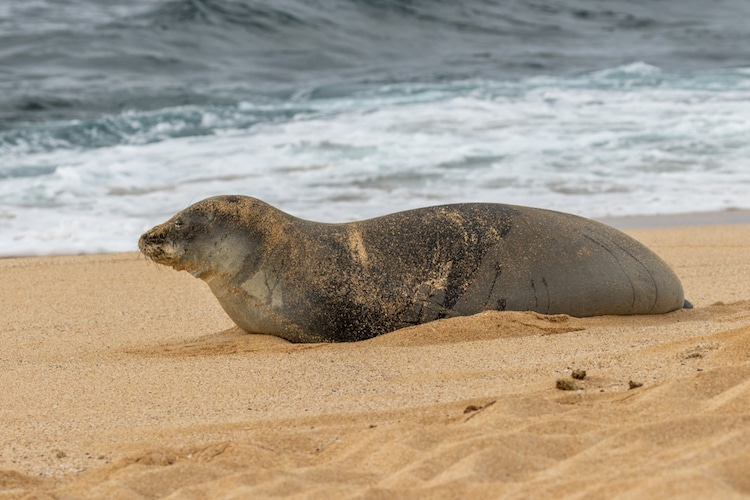 Though we mainly think of seals living in cold temperatures, the Hawaiian monk seal makes its home on the mostly uninhabited northwestern islands of Hawaii. One of the most endangered marine mammals in the world, these cute creatures have been threatened by the development of the coastline. As humans move in, seals are pushed out of their natural habitat or disturbed by beachgoers. More humans also mean more trash, and the Hawaiian monk seal has the highest entanglement rate of any marine mammal.

Where do they live? Northwestern Hawaiian Islands

What can you do to help? The Pacific Islands branch of NOAA has wonderful guidelines on how to be a “good neighbor” to Hawaiian monk seals. 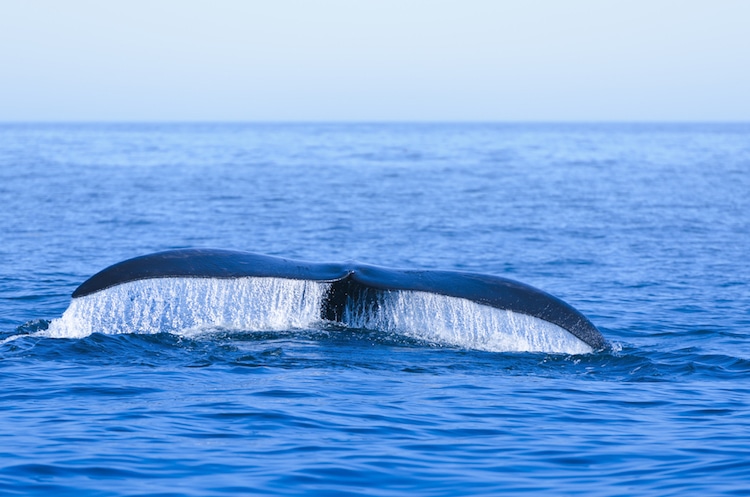 Despite whaling protection since the 1930's, commercial whale hunting has devastated the population of this gentle giant. The North Atlantic right whale is easily recognizable due to the white calluses on its head, which stand out against its dark skin. The species was especially popular with commercial whale hunters as early as the 11th century. Forty percent of its body weight is blubber, which causes it to float when dead. This is unusual for whales, but made it quite easy for hunters to collect the blubber. By 1935, there were estimates that the population was down to 100, and though commercial whaling was banned in 1937, the species continues to struggle. Today, the biggest threats to the North Atlantic right whale's survival are collisions with boats and entanglement in fixed fishing equipment.

Where do they live? Western North Atlantic Ocean

What can you do to help? Support the WDC, an organization that focuses on the conservation of whales and dolphins. 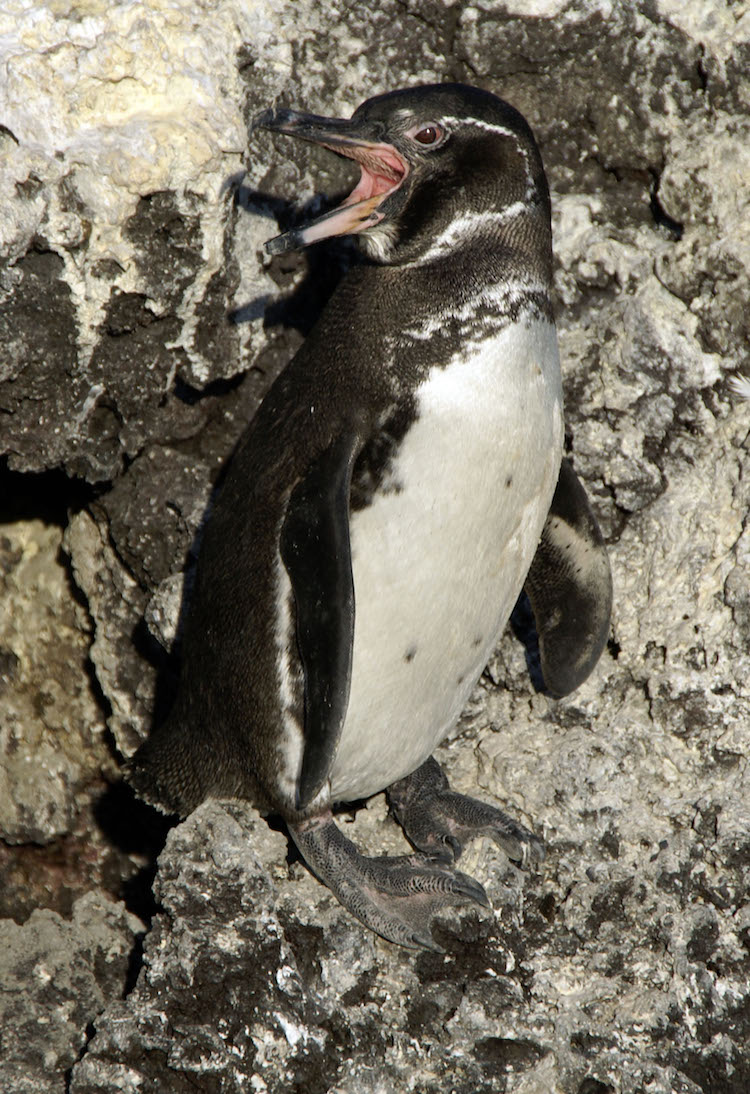 The only penguin that lives north of the equator, the Galápagos penguin's population declined by 70% in the 1980's. Though it's has since made a slight recovery, one of the biggest threats to the penguins is the El Niño Southern Oscillation, whicaffectsts sea temperatures. This causes a shortage of food for the Galápagos penguins, with many starving to death. El Niño also impacts their breeding season and life cycle. Other issues for the species include pollution, bycatch, and the introduction of other species. Dogs, for instance, carry diseases that can spread to the penguins, and cats are predators.

Where do they live? Galápagos archipelago

What can you do to help? The Galápagos Conservancy works to rebuild nesting sites in order to reverse the declining population of the species. 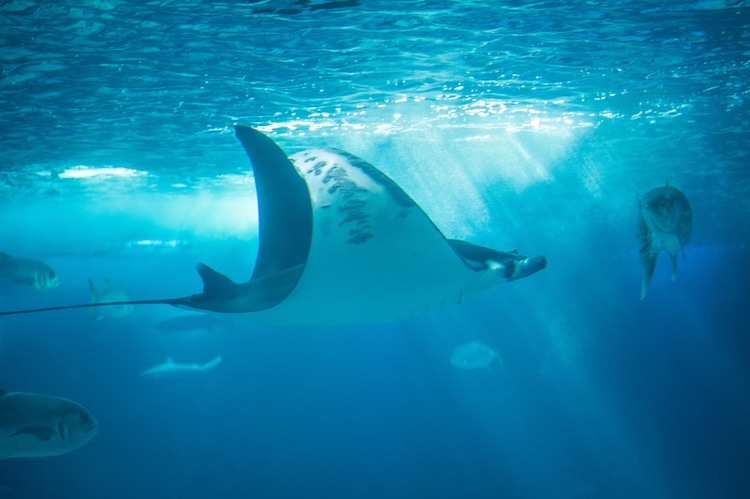 The large, elegant giant devil ray grows to almost 17 feet, making it one of the largest rays. Living in deep water, it feeds on plankton and small fish. With its large pectoral fins, the giant devil ray is easily able to traverse ocean waters. Exact population estimates are difficult, but it has been listed as endangered by the IUCN since 2006. Why? The giant devil ray has an extremely low birth rate. They are ovoviviparous, which means that only one egg at a time can develop inside a female and it takes about 24 months to hatch! And unfortunately, the ray often gets caught in fishing equipment like tuna traps, trawls, and dragnets meant for other fish. Its high bycatch mortality rate, coupled with a low birth rate for the species places it in danger.

Where do they live? Mediterranean and Eastern Atlantic

What can you do to help? Support the IUCN, whose Shark Specialist Group has outlined goals and actions to help protect this species, which gets less attention than many other threatened marine animals.

One of two subspecies of the South Asian river dolphin, this freshwater dolphin is blind and emits ultrasonic sound to find prey. Unfortunately, by living in one of the most densely populated areas of the world, the Ganges river dolphin's population has suffered tremendously. The construction of dams and massive irrigation projects have altered its food supply and limited its mobility, while boat collisions and fishing net entanglement are the cause of many deaths. Increased industrialization has also caused toxins to seep into the water system, eroding the ecosystem. They also face threats from poachers, who kill them for their meat and to use dolphin oil as fishing bait. The other subspecies of the South Asian river dolphin, the Indus river dolphin, is also endangered. And with so few dolphin species living in freshwater, it's critical that changes are made immediately.

Where do they live? Ganga and Brahmaputra river systems

What can you do to help? Donate to WWF India which is working the State Forest Department on a strategy for dolphin conservation and conducts education and awareness programs for local fishermen. 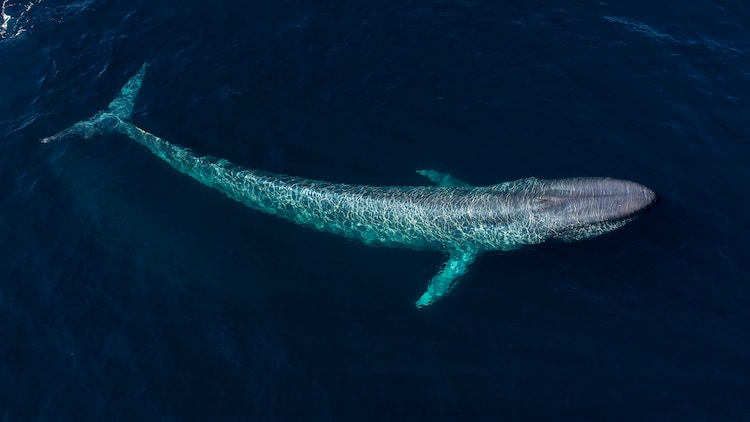 Whales play a very important part in the overall health of the marine environment, as they sit at the top of the food chain. However, the climate change has made a noticeable impact on krill (shrimp-like crustaceans), the blue whale's major prey, making this mammal particularly vulnerable. Although commercial whaling is no longer representing a threat, blue whales are threatened by the environmental changes, including toxic waste and habitat loss.

Where do they live? Southern Chile, Gulf of Carolina, Coral Triangle

What can you do to help? Make a symbolic whale adoption and support WWF's conservation efforts to help save some of the marine's most endangered animals. 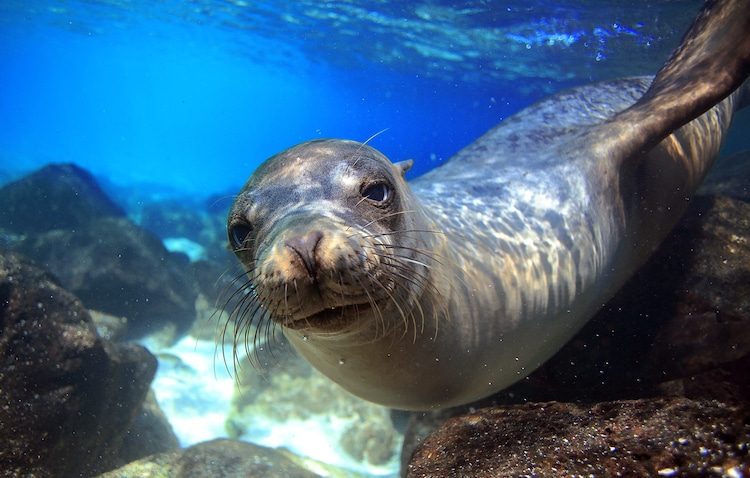 Sea Lions are the most common mammal in the Galápagos and hang out in large colonies on sandy shores and rocks on the island. They transition into the water to cool off with a swim or feed as needed. They have become vulnerable to the effects of climate change on the ocean currents, which has impacted the abundance of the fish they prey on. They have also fell victims of the bycatch in fisheries. Fishermen try to prevent the sea lions from coming aboard their boats by putting up barbwire as a barrier, but this has caused severe injuries to the sea lions. And species introduced to the neighboring communities, such as dogs, carry diseases that can spread to the sea lions.

Where do they live? The Galápagos

What can you do to help? Take action and speak up for the Sea Lions through WWF's Action Center. 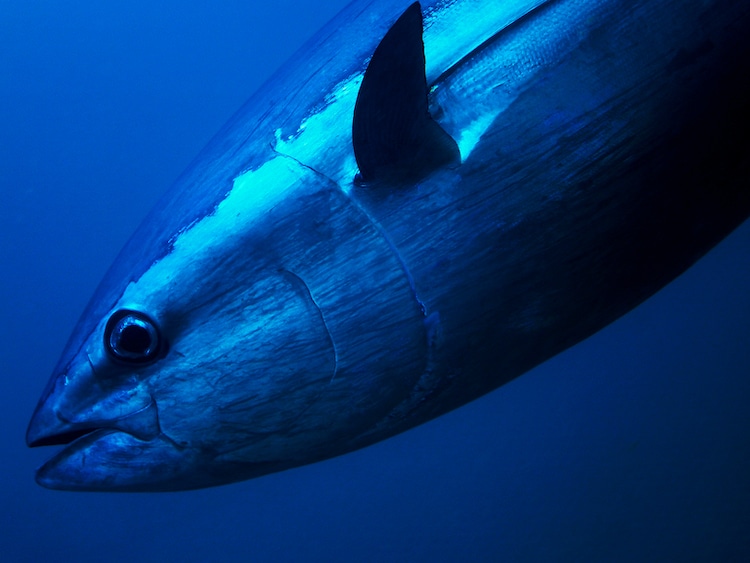 Bluefin are the largest tunas and are made for speed. They are built like a torpedo as they have fins that retract and eyes set flush to their body. Bluefin hunt by sight and have the sharpest vision of any bony fish. They are incredible predators and seek out schools of fish like herring, mackerel, and even eels. This makes them a top predator in the marine food chain, maintaining a balance in the ocean environment. Bluefin Tuna is a highly sought-after delicacy for sushi and sashimi in Asia, and the fish population has been declining as a result. Due to the demand for this fish in high-end sushi markets, Bluefin Tuna populations are disappearing from overfishing and illegal fishing.

Where do they live? Coral Triangle