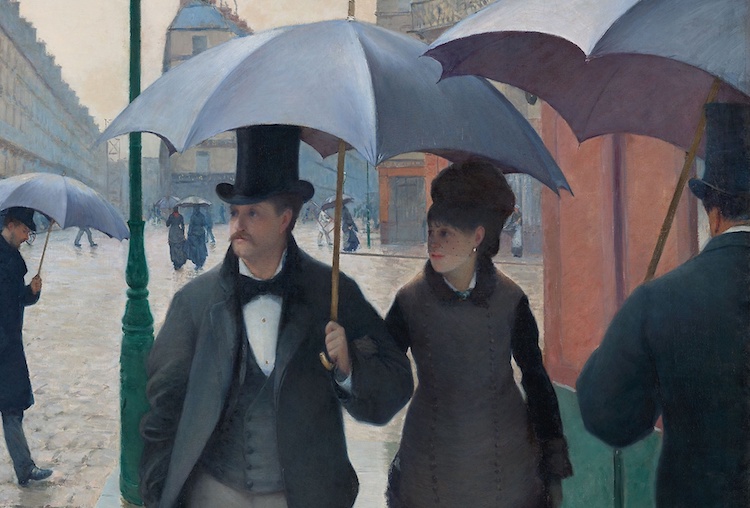 For a glimpse into fin de siècle Paris, look no further than the work of the Impressionists. Fascinated by contemporary life, these avant-garde artists sought to capture fleeting impressions of their everyday surroundings, which they often rendered in quick, sketch-like strokes. While this style has come to embody Impressionism, not all artists associated with the movement took this approach. In fact, the work of loyal, long-time Impressionist Gustave Caillebotte borders on Realism, with Paris Street; Rainy Day serving as a shining example.

Painted in 1877, Paris Street; Rainy Day is one of Gustave Caillebotte's most celebrated paintings—and a key piece of Impressionism. With such a seemingly disparate aesthetic, however, you may be wondering how Paris Street; Rainy Day fits into the genre. To answer this question, we must first look at the painting's context, beginning with the story of its creator. 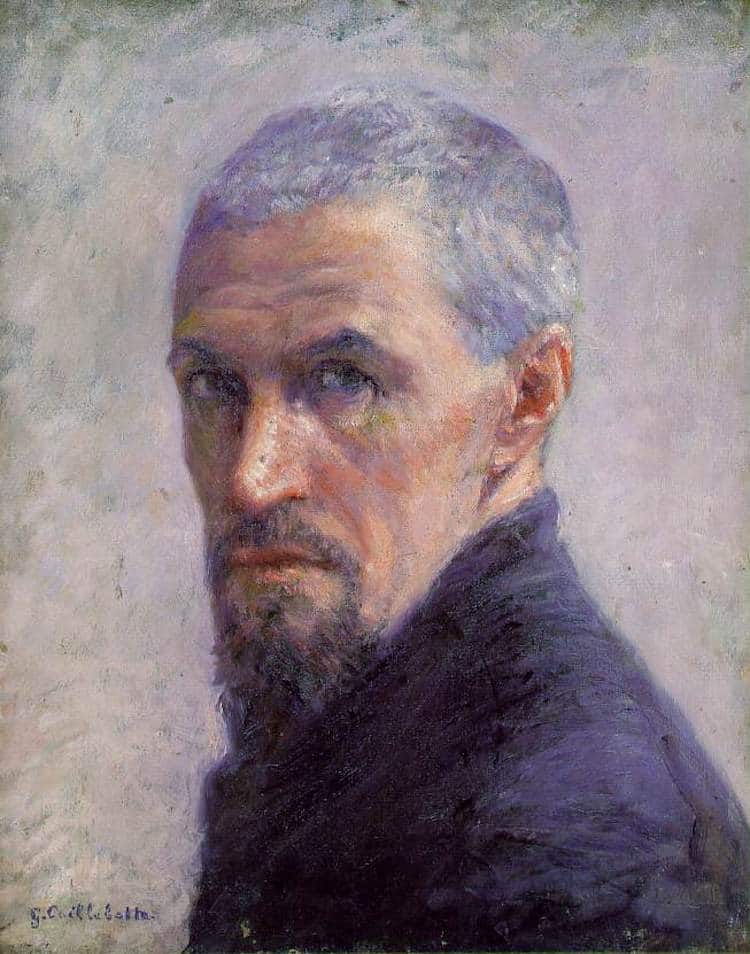 In 1848, French painter Gustave Caillebotte was born in Paris. While he dabbled in art as a child, Caillebotte spent his young adulthood studying law, working as an engineer, and fighting in the Franco-Prussian War. In 1873, however, he entered the École des Beaux-Arts (“School of Fine Arts”), and the following year, he befriended members of the Société Anonyme Coopérative des Artistes Peintres, Sculpteurs, Graveurs (“Cooperative and Anonymous Association of Painters, Sculptors, and Engravers”), a band of Paris-based painters who would later be known as the Impressionists. 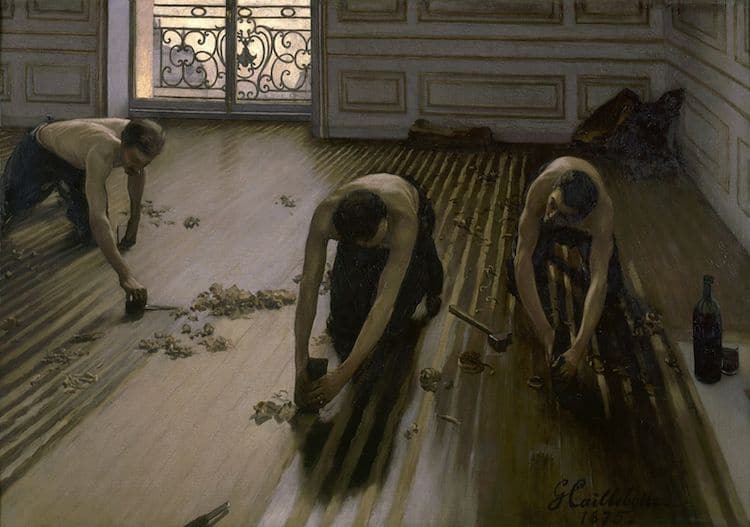 In 1874, this group of artists held their first of eight independent exhibitions. Intended to offer forward-thinking creatives an alternative to the salons of the Académie des Beaux-Arts (“Academy of Fine Arts”), this new tradition appealed to Caillebotte. While he attended the Impressionists' inaugural exhibition as a viewer, he was invited to show his work—including his famous Les raboteurs de parquet, or The Floor Scrapers, which had been rejected by the Salon—in the second edition, held in 1876.

Caillebotte's participation in the exhibition was met with positive reviews. Along with the friendships he had established with artists like Edgar Degas and Pierre-Auguste Renoir, this prompted him to continue working with the Impressionists. In 1877, he again exhibited his work in their annual exhibition, with Paris Street; Rainy Day among its most celebrated highlights. 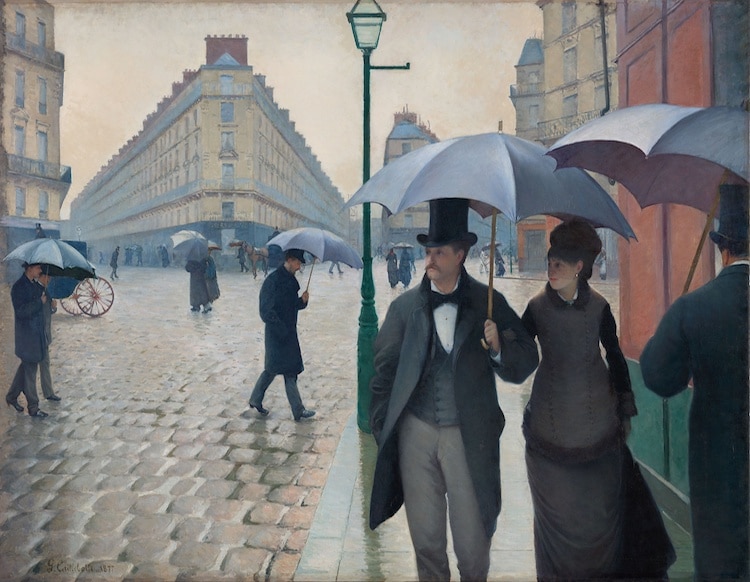 Paris Street; Rainy Day shows a typical Parisian intersection on a particularly drizzly day. Specifically, it is set in the Carrefour de Moscou (known today as the Place de Dublin) in the city's 8th arrondissement, or “district.” Though the scene looks like a snapshot, the composition was perfectly planned. Haussmann buildings—which, by 1877, had popped up all across Paris as part of Baron Haussmann's major modernization project—recede into the background; reflective, rain-soaked cobblestone streets compose the foreground; and streams of umbrella-covered figures cascade across the canvas.

While this choice of scenery may not seem revolutionary today, it is one of Impressionism's major contributions to modern art. A fleeting “impression” of a contemporary city scene, Paris Street; Rainy Day is a far cry from the historical, mythological, and allegorical scenes found in traditional French paintings. This divergence, however, does not mean that Impressionists weren't inspired by other movements. In fact, Caillebotte was profoundly influenced by photography, an art form practiced by his brother, Martial. 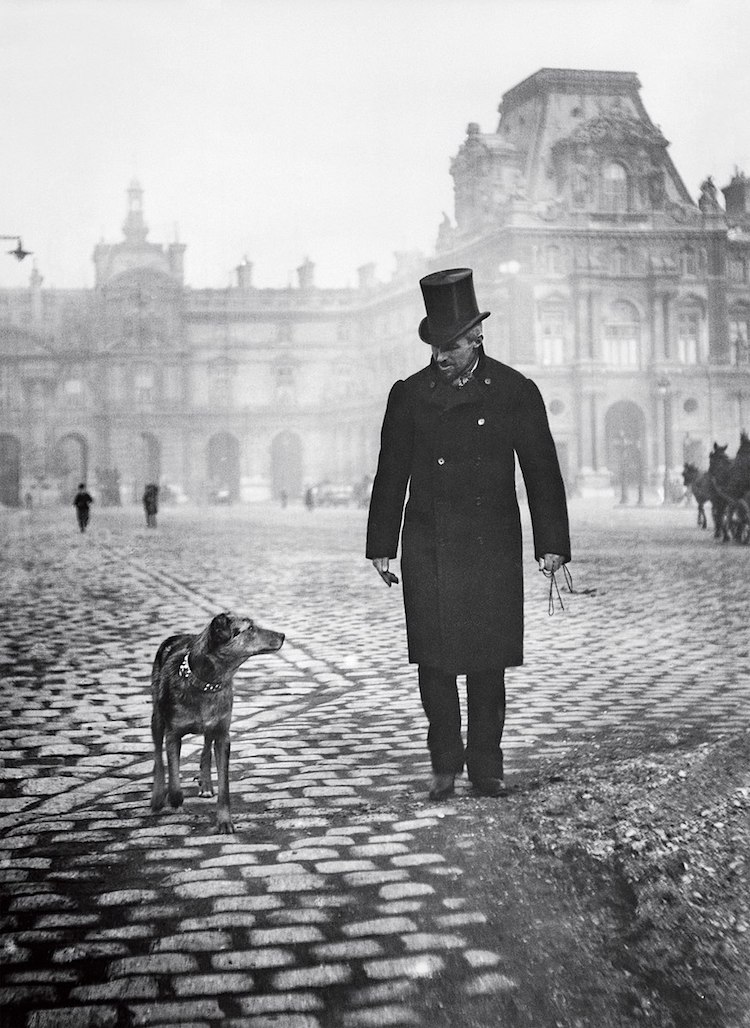 At the onset of Impressionism, photography was a new and pioneering practice. Interested in exploring the artistic capabilities of this budding technology, many Impressionists—namely, Degas, one of Caillebotte's closest friends—often cropped their compositions as if they were candid photographs. This approach resulted in asymmetrical compositions with subject matter seemingly spilling off the canvas.

Caillebotte employed this technique in many of his paintings, including Paris Street; Rainy Day. It is primarily evident in the way in which the artist placed his subjects within the composition—especially the figure on the far right of the painting, who, with half of his body outside of the frame, appears to be walking into a snapshot. Similarly, some of the figures in the background are obstructed—not by the edge of the canvas, however, but by passersby, umbrellas, and even a horse.

Deliberate cropping is not the only photographic sensibility evident in Paris Street; Rainy Day. Caillebotte also sought to evoke the way in which a camera focuses on certain objects—namely, blurred in the background, mostly clear in the foreground, and crisp in the middle. Caillebotte's realistic style and contemporary influences lend themselves equally to this technique, as they enabled the artist to pair his characteristically precise strokes with looser, “Impressionist” brushwork. 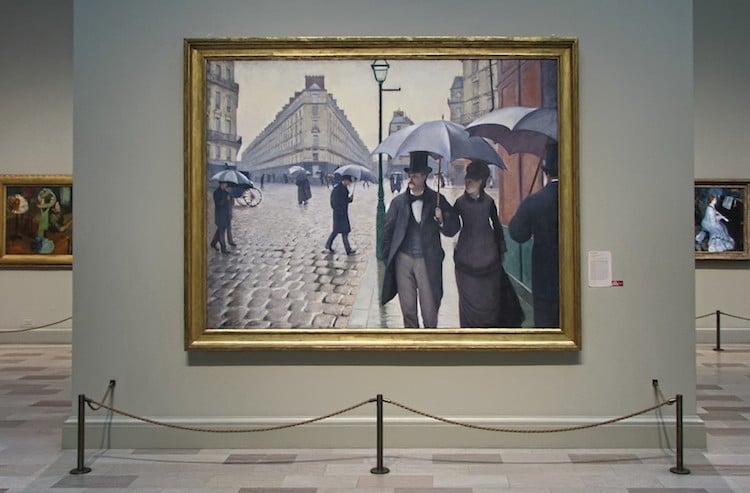 Paris Street; Rainy Day remained in the Caillebotte family until 1955, when it was purchased by prolific art collector Walter P. Chrysler Jr. Less than a decade later, Chrysler sold it Wildenstein and Company, a historic art dealership, who, in turn, sold to the Art Institute of Chicago in 1964.

Nearly 65 years later, Paris Street; Rainy Day remains a highlight of the museum's collection. Like other important works housed by the Art Institute of Chicago—including A Sunday Afternoon on the Island of La Grande Jatte, Nighthawks, and American Gothic—this seminal painting proves that any subject can inspire a masterpiece. 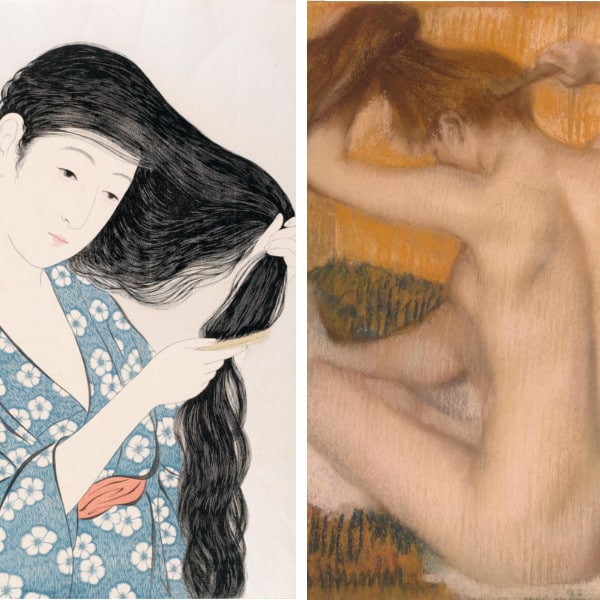 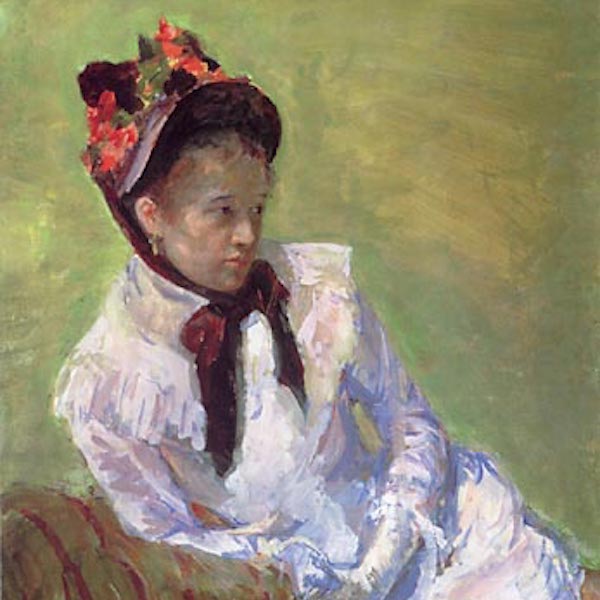 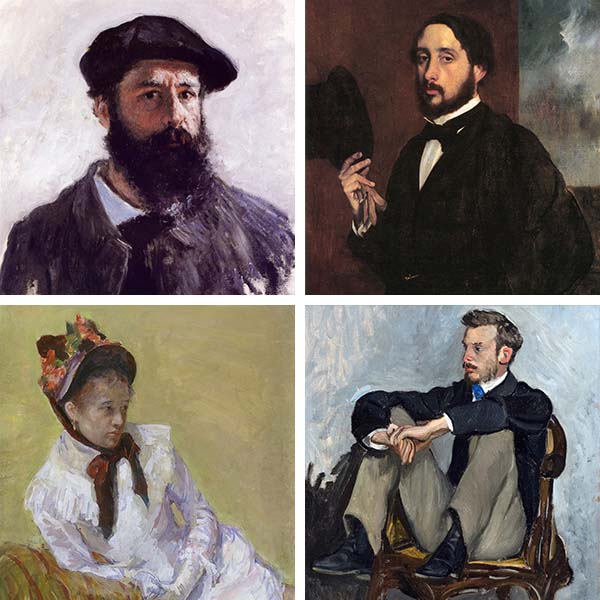