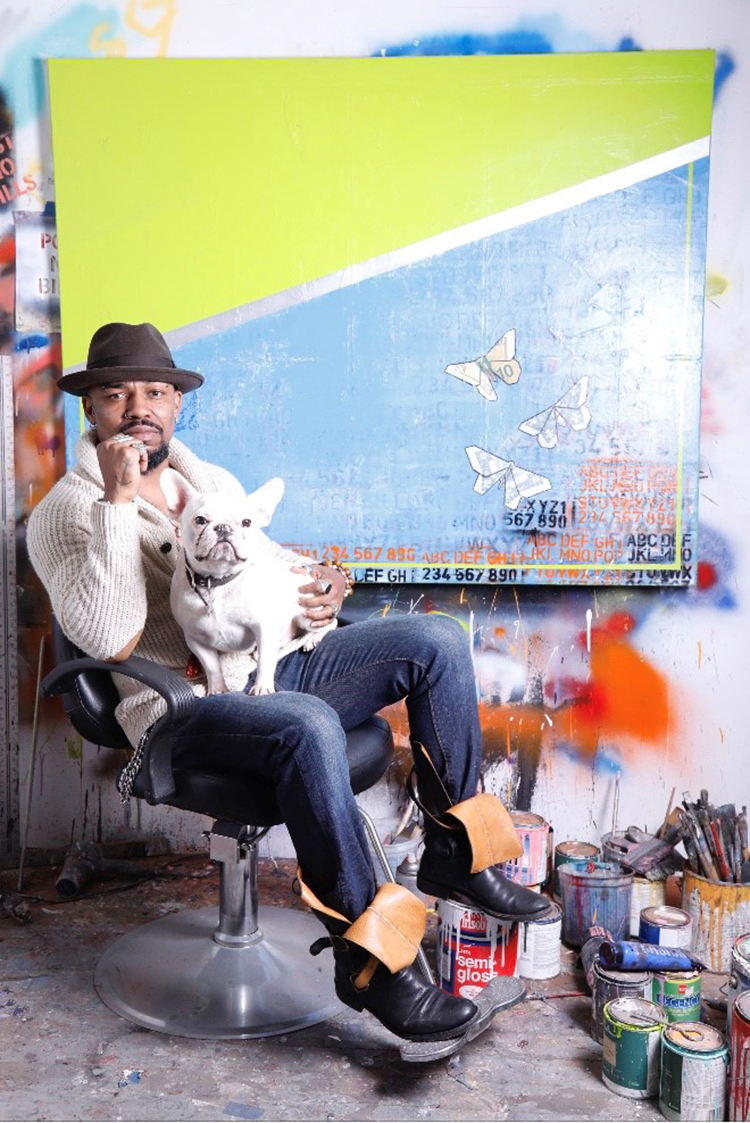 COVID has disrupted many areas of life in 2020. The pandemic's devastating effects have particularly affected the art world—exhibitions were cancelled, galleries closed, and less disposable income became available among potential buyers. With lockdowns and a depressed economy, artists around the world have struggled to support themselves and their families by selling their work or teaching workshops. But one established New York painter is working to help those in need, artist to artist. In 2020, painter and mixed media artist Guy Stanley Philoche spent over $60,000 collecting the works of his fellow global artists in an effort to provide much needed support during the pandemic.

Philoche's year started out with a stellar, sold-out exhibition of his own work—a success he hoped to celebrate by buying his dream watch. However, the swift onset of the pandemic in New York City interrupted his plans. A New Yorker of 20 years, the artist saw the struggles of his artistic community. One friend in particular lost his job and was stressing over paying bills for his young family. To help his friend, Philoche purchased one of the friend's paintings for his own collection. Philoche told CNN, “It was such a big deal for him at that moment, and that's when I realized if he's panicking like this, other artists are too.”

The plans for a watch took a back seat. Philoche generously turned his attention to struggling artists across the world whose work could no longer be publicly exhibited to potential buyers. Through an Instagram video in late March, the painter sent out an open call for portfolios to any artist needing assistance. Messages flowed in, and Philoche began purchasing pieces which spoke to him. Each piece cost between $300 and $500 and was shipped to his studio in East Harlem, where the painter took down his existing displays to make room for the new works. To some of the artists, Philoche's purchase was the first work they had ever sold. To others, it meant one less bill to worry about until galleries reopen. After spending thousands of his own funds, Philoche extended his mission to serve as a curator of sorts, arranging for his own collectors to purchase promising pieces from artists they may otherwise never have encountered.

The generous use of his position as a now-established artist within the New York exhibition scene is a hallmark of Philoche's career. As a young child, he emigrated with his family from Haiti to Connecticut. Art—then in the form of cartoons and drawing—was his refuge. When he moved to New York as a young adult 20 years ago, he struggled to gain acknowledgement and recognition from the artistic establishment. Like many other young artists of color, he had to work hard to—as he puts it—get into the room. “I had no one open a door for me. It was me going through the back door, the window, until I found a way in the room by myself,” he says of his early years in the city. Eventually, his years of work and exceptional, modern talent earned him an impressive resume of solo exhibits and a catalog of paintings which sell for northwards of $100,000. He is now represented by Cavalier Galleries. Since “making it” in the art world, Philoche has sought to use his influence to give back. His COVID-era purchases are only part of this mission. His philosophy is “Sell a painting, buy a painting.”

My Modern Met had the chance to catch up with Guy Stanley Philoche about his work, his COVID mission supporting other artists, and his hopes for struggling artists in the future. Read on to discover more about how artists—and you—can give back to communities. 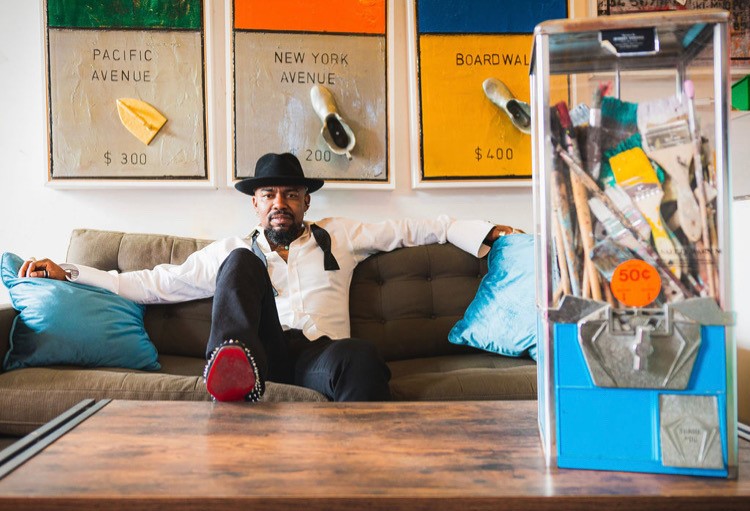 Since March, you have received messages from around the world responding to your video calling for artists to send details of their work. Can you share any particular stories of how artists are struggling—or coping—with the pandemic?

The term “struggling artist” has taken on a completely different meaning during the pandemic and pushed already struggling artists to the brink. Their day job—which paid the bills while they showed at a local gallery, rented out a studio to make art, or painted at night—is hardly possible now. With the closing of galleries and major art shows, like Art Basel, artists have not been able to sell their work at all. And for some, their big break was deferred, the chance to have 60,000-plus people see their work at once. Artists live to have their work shown on a white gallery wall—it’s what they love doing, it is in their DNA, it’s ingrained, and life doesn’t exist without it. No artist wants to struggle, it’s the reason my parents told me they were not paying for me to attend art school—they didn’t want to see me struggle all my life. There are hundreds of stories. All are equally painful to hear. People just need to listen and appreciate what art really means.

For some artists, the work you buy is the first they have ever sold. Do you remember the first work you sold as a young artist in New York City?

Yes, of course. It was part of my Untitled Series, during my first group show of five. I was beyond ecstatic. The only two paintings I had in the show sold at a boutique gallery in Chelsea. It launched my career and gave me the confidence and reassurance that my work had value and I was on the right path. It was all I ever wanted to do. The journey of moving to New York by myself, with two duffle bags and a dream, suddenly made sense. 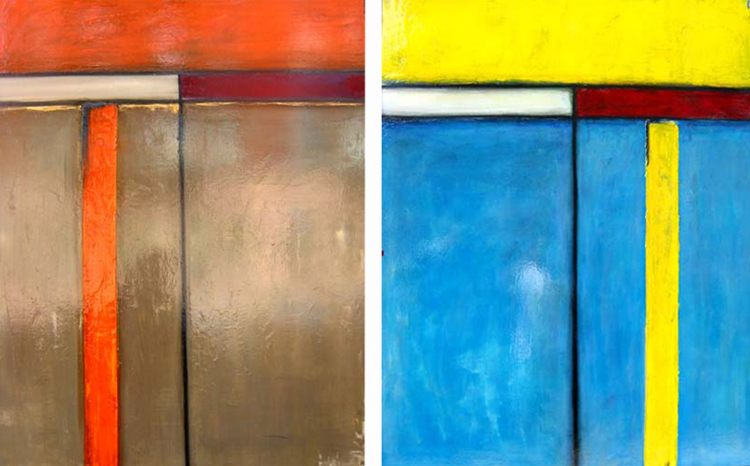 Your philosophy is “Sell a painting, buy a painting.” Do you have a favorite find over the years?

For artists or art lovers who cannot afford to purchase a painting at present, what other ways would you suggest they can support artistic communities?

Donating to artist communities is a great way to support. There are multiple artist-only living accommodations scattered throughout New York that are always in need of assistance. Whether it’s donating supplies or putting a down payment on their work—that contribution, no matter how big or how small, could help them buy food or more art supplies. It’s also important to remember that not all art cost hundreds of thousands or millions of dollars, you can find really great art for under $100; it’s whatever speaks to the purchaser. 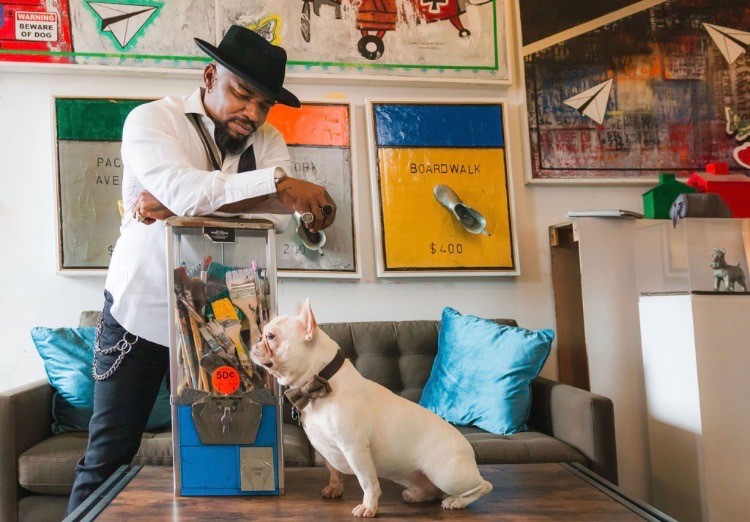 What are you doing with the pieces you have purchased from struggling artists during the pandemic?

For now, the works that I have purchased make me happy. I look at them every day, and each day I smile because I buy what I love.

Any plans for a future exhibition of your collection, once it is safe to do so?

There is a possible pop-up show of the Philoche Collection that would be open to the viewing public…stay tuned.

There is the trope of the struggling artist, one that is too often true. What changes would you like to see in the way society—and art institutions—support artists?

I would like for society to realize that art is truly important. The arts in general, from dance to theater to paintings, are the reason we visit museums and galleries daily. Can you imagine a world with no Picasso, Vincent van Gogh or the MoMa? They’re part of the reason we travel to various destinations around the world, to see the Louvre, the Tate Museum, or the Art Institute of Chicago.

I’d also like for more artists of color to be included in major institutions around the world. When I was a kid, people always said you can be whatever you want when you grow up—you could be a doctor, a lawyer, a teacher, or even the President of the United States. But it wasn’t until President Barack Obama that I really believed that I could be anything I wanted. So, when a child sees a painting and finds out that artist looks them, that gives them hope! Hope to dream big that one day their work will be hanging at one of those big museums. 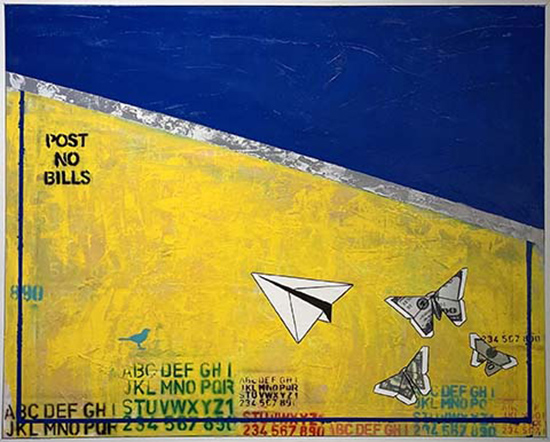 Lastly, how is your own artistic practice responding to the challenges faced by New Yorkers during the past nine months?

It's challenging some days, but the pandemic, if anything, has heightened my awareness of the meaning of art. Instead of focusing on art reflecting the suffering, I want to take people out of their fear and pain and make them smile. I get lost in my studio, and at times if the art store was closed, I would come up with new colors from the colors I had left or had to find new media to use. I played a lot of music and listened to where the brush would take me. And out of all of that, came my Remembering Your Innocence series.

The series transports the viewer into a world of beauty, nostalgia, and hope through the combination of abstraction, realism, and popular culture. When creating the series, I called upon my memories of a more carefree time and created my own versions of Peanuts characters, Garfield, and more. These cherished characters from my childhood were combined with textured surfaces reminiscent of the walls of New York City, thick with remnants of posters and graffiti overlaid with vibrant blocks of color to create works that brought happiness and allowed for the viewer to escape from the current state of the world to a more peaceful time.