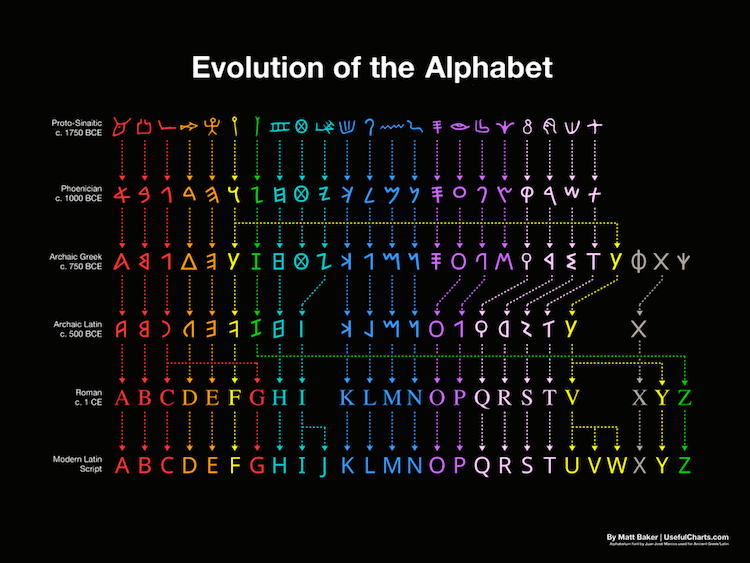 Most of us use the letters of the alphabet everyday, but did you ever stop to wonder how their shapes came to be? The history of the alphabet is fascinating, and each of the 26 letters has its own unique story. Matt Baker (of UsefulCharts) has designed a handy poster that documents the evolution of our familiar alphabet from its ancient Egyptian Proto-Sinaitic roots (c. 1750 BCE) up to present day Latin script.

The limited edition Evolution of the Alphabet chart shows how early shapes and symbols eventually morphed to become the ABCs we know today. While some letters are recognizable quite early on, others have little resemblance at all. The letter “A” for example, began as an Egyptian hieroglyphic that looks like an animal head with horns. Through Phoenician (c. 1000 BCE), early Greek (c. 750 BCE), and early Latin (c. 500 BCE) periods, the lines that made “A” eventually simplified to become the symbol we know today.

The letter “C” was originally shaped like a boomerang or hunter’s stick. It wasn’t until around 500 BCE that it was given its crescent shape, and approximately another 500 years more until the Romans flipped it to the direction it is written today (and also reworked the shape to become “G”). Additionally, one particularly interesting development the chart reveals is how the early Greek letter for “F” actually evolved to also become present-day “U,” “V,” “W,” and “Y.”

You can buy the Evolution of the Alphabet chart and check out more of Baker’s poster designs on the UsefulCharts website.

Matt Baker (of UsefulCharts) has designed a handy poster that documents the fascinating history of the alphabet.

Evolution of the English Alphabet from r/Damnthatsinteresting

All images via Matt Baker / UsefulCharts.

Entire Alphabet Found on the Wing Patterns of Butterflies

Illustrator Recreates the Alphabet with Characters from Wes Anderson Films