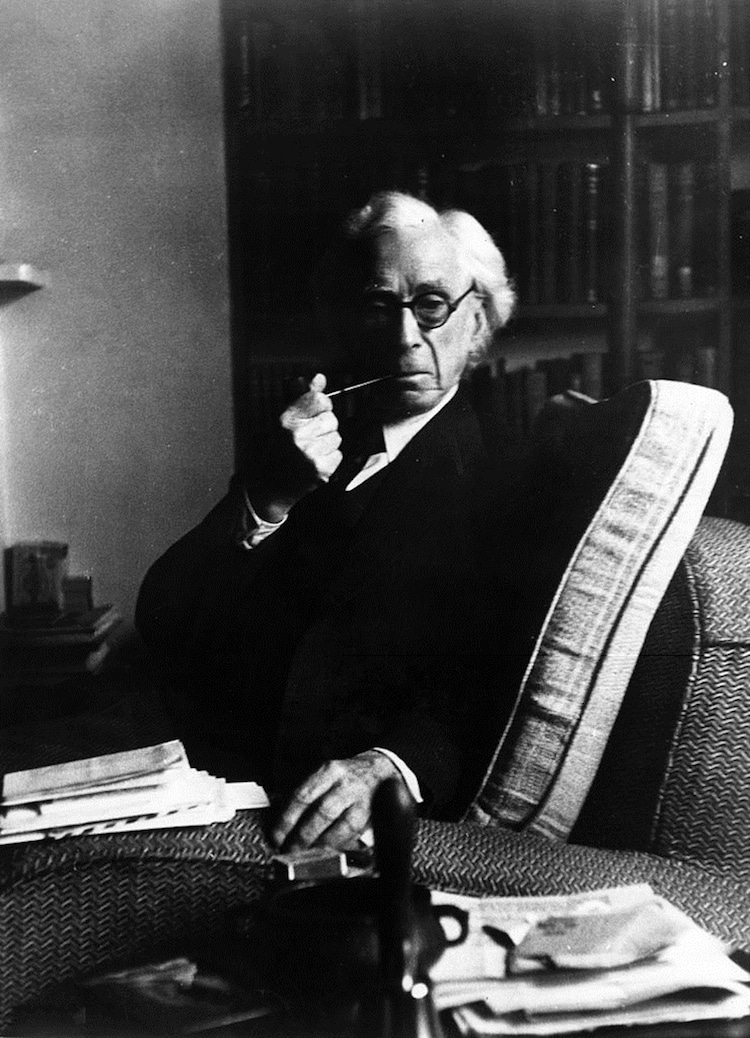 (Photo: Wikimedia Commons Public Domain)
This post may contain affiliate links. If you make a purchase, My Modern Met may earn an affiliate commission. Please read our disclosure for more info.

Bertrand Russell is one of modern philosophy's most prolific minds. Born in Victorian England, Russell rejected British idealism in favor of logic—an approach that has significantly shaped contemporary perceptions of mathematics, language, and even aging. In his essay, “How to Grow Old,” Russell uses his logical thinking to lay out his advice for achieving “a successful old age.”

Penned for his book, Portraits From Memory And Other Essays, “How to Grow Old” outlines the lessons Russell had learned by his 81st year. “In spite of the title,” the prose begins, “this article will really be on how not to grow old, which, at my time of life, is a much more important subject.” Though relatively short, the piece is packed full of insight, featuring commentary that begins comically (“My first advice would be to choose your ancestors carefully”) and concludes existentially (“But in an old man who has known human joys and sorrows . . . the fear of death is somewhat abject and ignoble.”) Of course, Russell is a philosopher, so this is to be expected—as are his musings on health.

While the philosopher stresses the significance of keeping psychologically fit, he considers strict diets, sleeping schedules, and other physical regimes a little bit less important. “I eat and drink whatever I like, and sleep when I cannot keep awake,” he says. “I never do anything whatever on the ground that it is good for health, though in actual fact the things I like doing are mostly wholesome.”

Toward the end of the essay, Russell reveals his top tip for getting older: broaden your horizons. Specifically, he notes that one's interests should expand with age, as this will keep you less concerned with ego and more in tune with the universe as a whole. “An individual human existence should be like a river: small at first, narrowly contained within its banks, and rushing passionately past rocks and over waterfalls. Gradually the river grows wider, the banks recede, the waters flow more quietly, and in the end, without any visible break, they become merged in the sea, and painlessly lose their individual being.”

Profoundly poignant, “How to Grow Old” is an indispensable read for those who want to live a long and logical life.

Read the full text of Bertrand Russell's inspiring essay, “How to Grow Old.”

In spite of the title, this article will really be on how not to grow old, which, at my time of life, is a much more important subject. My first advice would be to choose your ancestors carefully. Although both my parents died young, I have done well in this respect as regards my other ancestors. My maternal grandfather, it is true, was cut off in the flower of his youth at the age of sixty-seven, but my other three grandparents all lived to be over eighty. Of remoter ancestors I can only discover one who did not live to a great age, and he died of a disease which is now rare, namely, having his head cut off. A great-grandmother of mine, who was a friend of Gibbon, lived to the age of ninety-two, and to her last day remained a terror to all her descendants. My maternal grandmother, after having nine children who survived, one who died in infancy, and many miscarriages, as soon as she became a widow devoted herself to women’s higher education. She was one of the founders of Girton College, and worked hard at opening the medical profession to women. She used to tell of how she met in Italy an elderly gentleman who was looking very sad. She asked him why he was so melancholy and he said that he had just parted from his two grandchildren. ‘Good gracious,’ she exclaimed, ‘I have seventy-two grandchildren, and if I were sad each time I parted from one of them, I should have a miserable existence!’ ‘Madre snaturale!,’ he replied. But speaking as one of the seventy-two, I prefer her recipe. After the age of eighty she found she had some difficulty in getting to sleep, so she habitually spent the hours from midnight to 3 a.m. in reading popular science. I do not believe that she ever had time to notice that she was growing old. This, I think, is the proper recipe for remaining young. If you have wide and keen interests and activities in which you can still be effective, you will have no reason to think about the merely statistical fact of the number of years you have already lived, still less of the probable shortness of your future.

As regards health, I have nothing useful to say as I have little experience of illness. I eat and drink whatever I like, and sleep when I cannot keep awake. I never do anything whatever on the ground that it is good for health, though in actual fact the things I like doing are mostly wholesome.

Psychologically there are two dangers to be guarded against in old age. One of these is undue absorption in the past. It does not do to live in memories, in regrets for the good old days, or in sadness about friends who are dead. One’s thoughts must be directed to the future, and to things about which there is something to be done. This is not always easy; one’s own past is a gradually increasing weight. It is easy to think to oneself that one’s emotions used to be more vivid than they are, and one’s mind more keen. If this is true it should be forgotten, and if it is forgotten it will probably not be true.

The other thing to be avoided is clinging to youth in the hope of sucking vigour from its vitality. When your children are grown up they want to live their own lives, and if you continue to be as interested in them as you were when they were young, you are likely to become a burden to them, unless they are unusually callous. I do not mean that one should be without interest in them, but one’s interest should be contemplative and, if possible, philanthropic, but not unduly emotional. Animals become indifferent to their young as soon as their young can look after themselves, but human beings, owing to the length of infancy, find this difficult.

I think that a successful old age is easiest for those who have strong impersonal interests involving appropriate activities. It is in this sphere that long experience is really fruitful, and it is in this sphere that the wisdom born of experience can be exercised without being oppressive. It is no use telling grownup children not to make mistakes, both because they will not believe you, and because mistakes are an essential part of education. But if you are one of those who are incapable of impersonal interests, you may find that your life will be empty unless you concern yourself with your children and grandchildren. In that case you must realise that while you can still render them material services, such as making them an allowance or knitting them jumpers, you must not expect that they will enjoy your company.

Some old people are oppressed by the fear of death. In the young there there is a justification for this feeling. Young men who have reason to fear that they will be killed in battle may justifiably feel bitter in the thought that they have been cheated of the best things that life has to offer. But in an old man who has known human joys and sorrows, and has achieved whatever work it was in him to do, the fear of death is somewhat abject and ignoble. The best way to overcome it -so at least it seems to me- is to make your interests gradually wider and more impersonal, until bit by bit the walls of the ego recede, and your life becomes increasingly merged in the universal life. An individual human existence should be like a river: small at first, narrowly contained within its banks, and rushing passionately past rocks and over waterfalls. Gradually the river grows wider, the banks recede, the waters flow more quietly, and in the end, without any visible break, they become merged in the sea, and painlessly lose their individual being. The man who, in old age, can see his life in this way, will not suffer from the fear of death, since the things he cares for will continue. And if, with the decay of vitality, weariness increases, the thought of rest will not be unwelcome. I should wish to die while still at work, knowing that others will carry on what I can no longer do and content in the thought that what was possible has been done.

Did you learn 'How to Grow Old'? Share
Like My Modern Met on Facebook
Get Our Weekly Newsletter
Become a
My Modern Met Member
As a member, you'll join us in our effort to support the arts.
Become a Member
Explore member benefits

Did you learn 'How to Grow Old'?