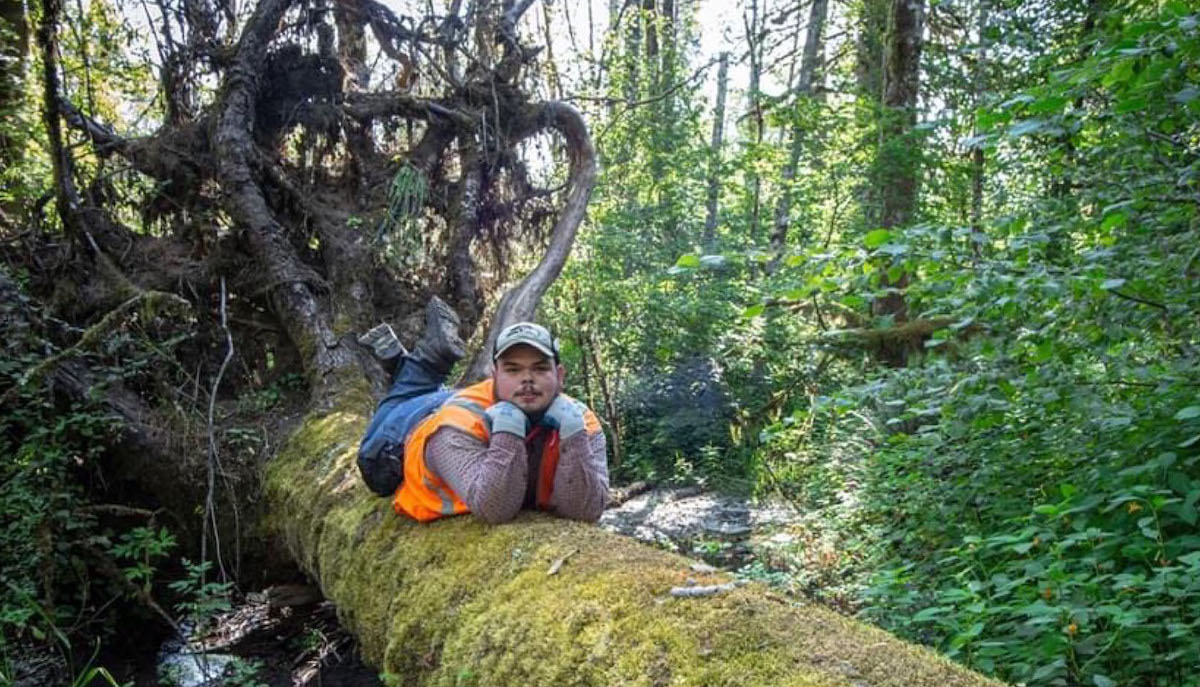 You never know what you’ll find in the wilderness when no one is around; unless, of course, you set up a camera trap to capture the action when you’re away. That's exactly what photographer Jeff Wirth did in order to see the wildlife near his home in southwest Washington state. But when he reviewed some of his latest footage, he found that he got way more than expected. A passerby had noticed the setup and posed for a picture on a mossy log! The man is seen on camera in a position reminiscent of a pinup model as he lays on his stomach with his legs up and crossed behind him, and his chin gingerly propped up on his hands.

Wirth’s intention with the trail cam was to photograph elusive wildlife. “A couple of months ago I was out exploring a wetland created by beavers near my house,” he tells My Modern Met, “and I noticed a large downed tree that had several piles of bobcat scat on it.” He came back the next day with a DSLR trap in hopes of catching a glimpse of the creature. “I returned to the camera once a week to check for images and put in fresh batteries,” he explains. “I got a few images of critters including raccoons, weasels, a few bobcat photos, and a number of birds, but nothing I was super happy with so I left the camera there.”

Wirth later returned to check the device and that’s when he noticed the mystery man. “The first sequence of images I saw were those of a surprise visitor that made me smile ear to ear and laugh to myself alone in the forest,” he recalls. “I never get humans on camera, so this was interesting. As you may notice, he was not camera-shy, to say the least. He hammed it up pretty good and left me with a sequence of images in a variety of poses.”

The man did not leave any contact information, so Wirth couldn't get in touch with him to share the photos. But thanks to the internet, the model didn’t remain anonymous for long. “I posted the images on the internet, and they took off!” Wirth says. “Since then, the mystery man found the post on Twitter and Instagram and we have been texting back and forth the past week. Turns out he was doing invasive plant management along the creek I was set up on. Pretty cool!”

When photographer Jeff Wirth set up a trail cam to capture glimpses of wildlife, he never expected a human to pose for the camera. Here's a bobcat snapped using the same setup:

The Internet took the liberty of combining the two images à la Animorphs.

Are you kidding me?! pic.twitter.com/kPbCuNpjcc

Think this is a funny photo? Share
Like My Modern Met on Facebook
Get Our Weekly Newsletter
Become a
My Modern Met Member
As a member, you'll join us in our effort to support the arts.
Become a Member
Explore member benefits