Giant Angel Formed With Over 100,000 Knives Confiscated by Police 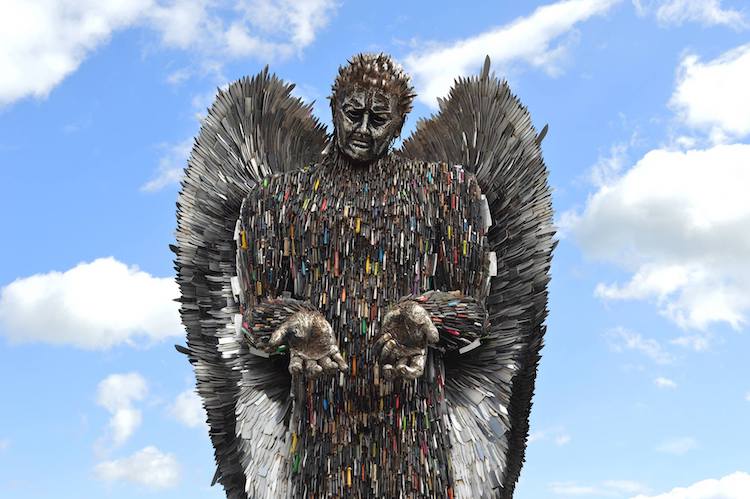 Sculptor Alfie Bradley works with improbable materials to create incredible works of art. And with his sculpture Knife Angel, he also used his work to send a strong social message about the dangers of knife violence. Formed from over 100,000 knives turned over to 43 police stations around the UK during confiscations and amnesties, the powerful, 27-foot-tall sculpture is a reminder of how many lives could be saved if people put down their weapons.

Taking a year and a half to design and create, the idea for the piece came to Bradley while he was working as the resident sculptor at the British Ironwork Centre. After noticing the rise in stabbings around the UK, Bradley wanted to create a piece that would bring awareness of the topic to the public. The center donated collection bins to police departments around the country in a campaign called Save a Life, Surrender Your Knife.

The knives were then sent to Bradley in tubes, and he went through the arduous task of cleaning the knives, dulling the blades, and sorting each weapon by size and color to make the task of forming the sculpture easier. While this proved the biggest technical hurdle, it was the emotional challenge that took the biggest toll. “The hardest part of creating the Knife Angel was meeting and hand engraving personal messages on each feather on the back of the angel's wings from affected people and families, and seeing them become overwhelmed with emotion once seeing the angel,” Bradley tells My Modern Met. 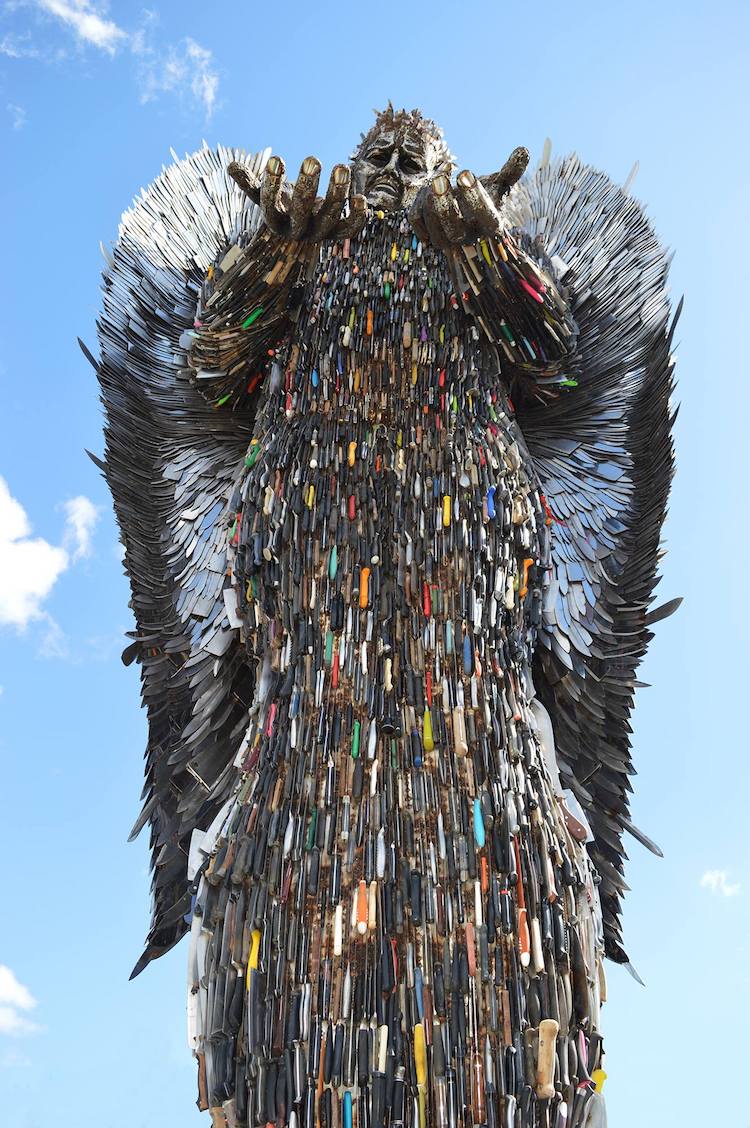 Indeed, over 80 families affected by knife violence had their personal messages engraved on the blades that form the feathers of the angel wings. Collectively, it's a powerful reminder of what damage a small piece of metal can cause.  More than a year after its completion, British Ironwork continues to work with police organizations to collect weapons and highlight efforts to curb knife violence. For Bradley, who opened his own workshop in 2016, his original mission has been fulfilled. “I hope this sculpture shows the amount of damage knife crime has caused and still is causing around the UK, and the amount of broken families left behind. I have had gang members from numerous cities around the UK visit and engrave their lost friends' names with tears in their eyes saying it needs to all stop.”

While the Knife Angel is currently at British Ironwork in Shropshire, there is a petition to bring this monument against knife violence to the fourth plinth of Trafalgar Square in London in order to make a strong statement that violence will not be tolerated. 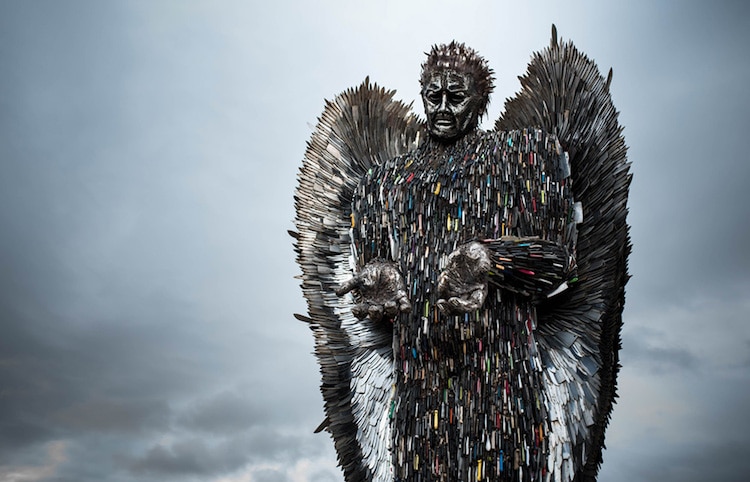 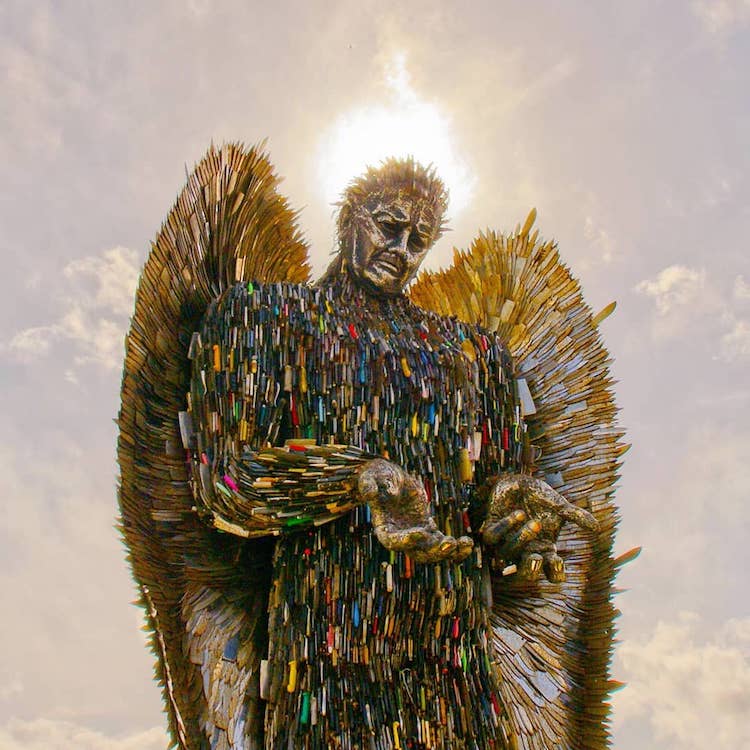 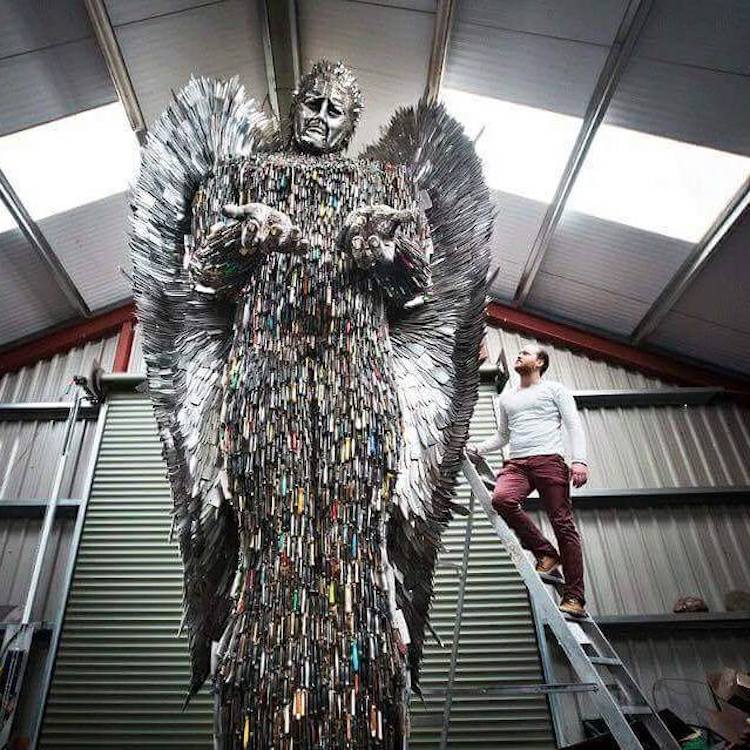 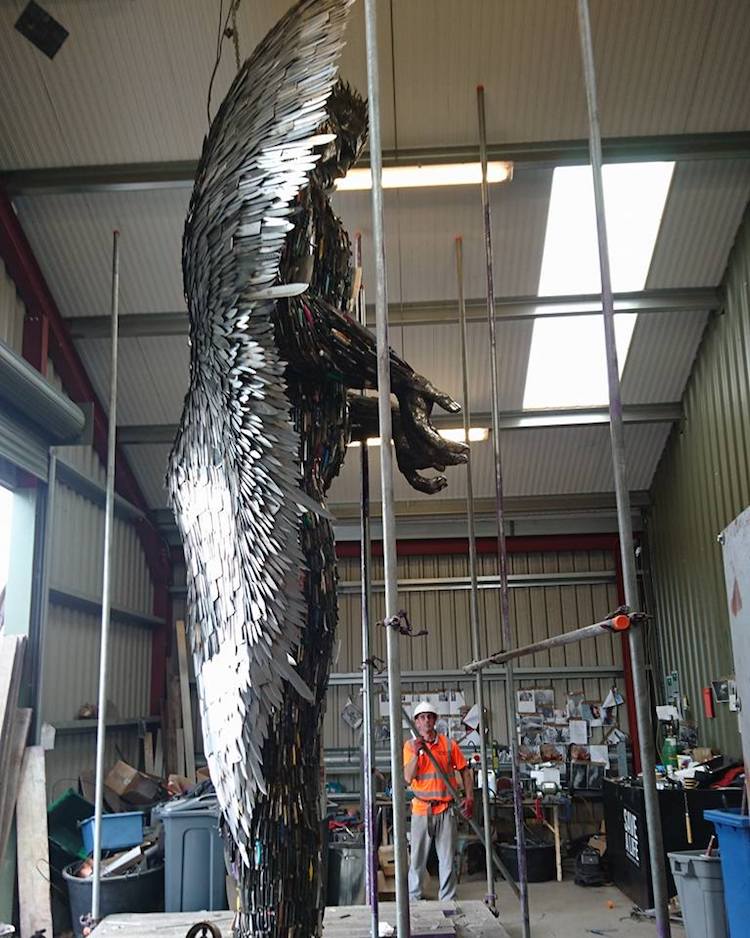 43 police precincts across the UK collected weapons that were confiscated or turned over in amnesty. 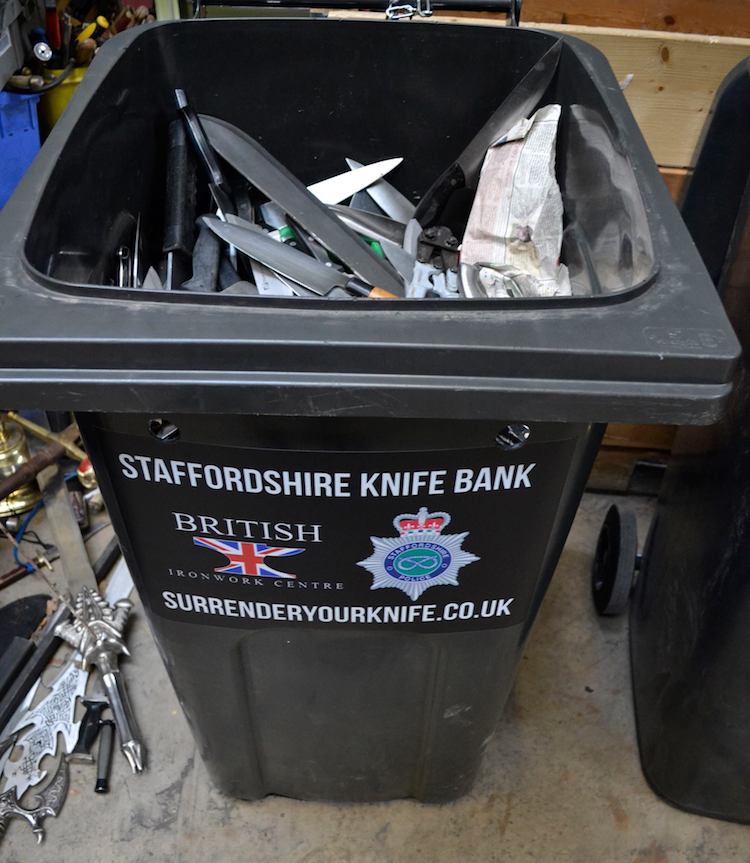 They were often sent to sculptor Alfie Bradley in evidence tubes, and he had the arduous task of cleaning and sorting each knife by hand. 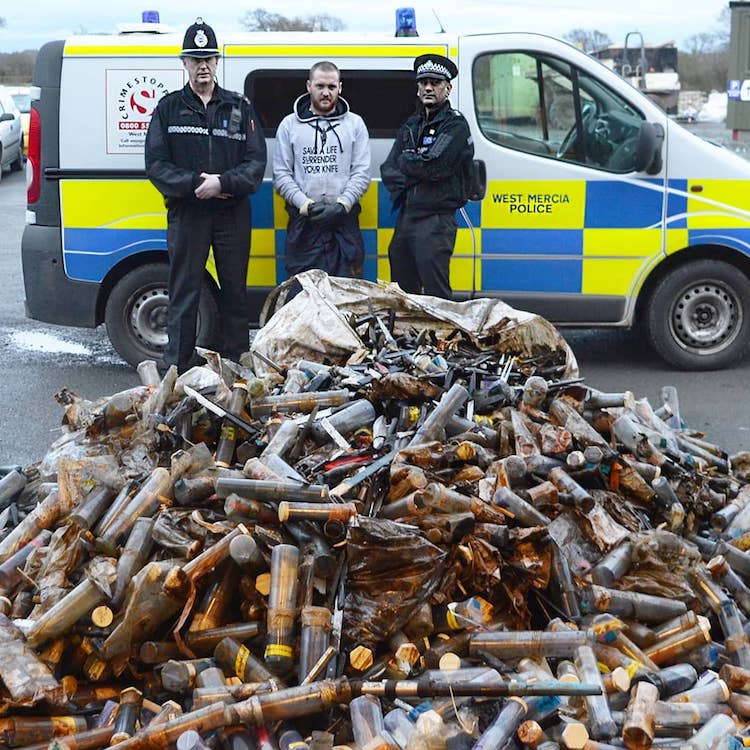 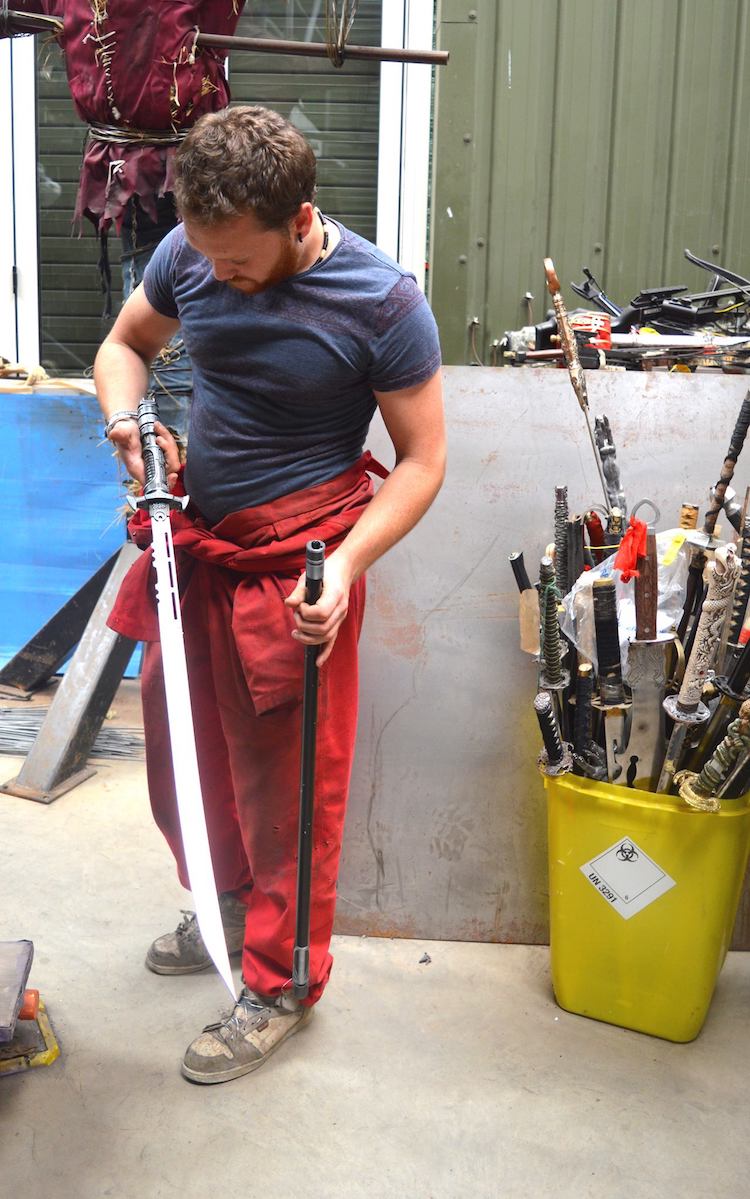 The carefully sculpted hands and face were the only areas, along with the feet, not covered in knives. 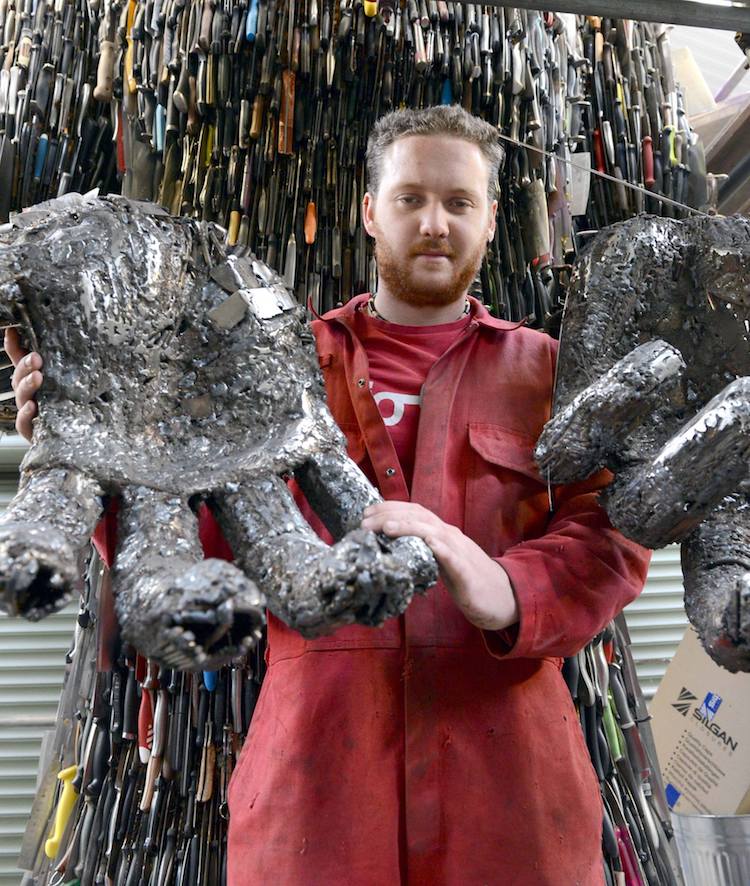 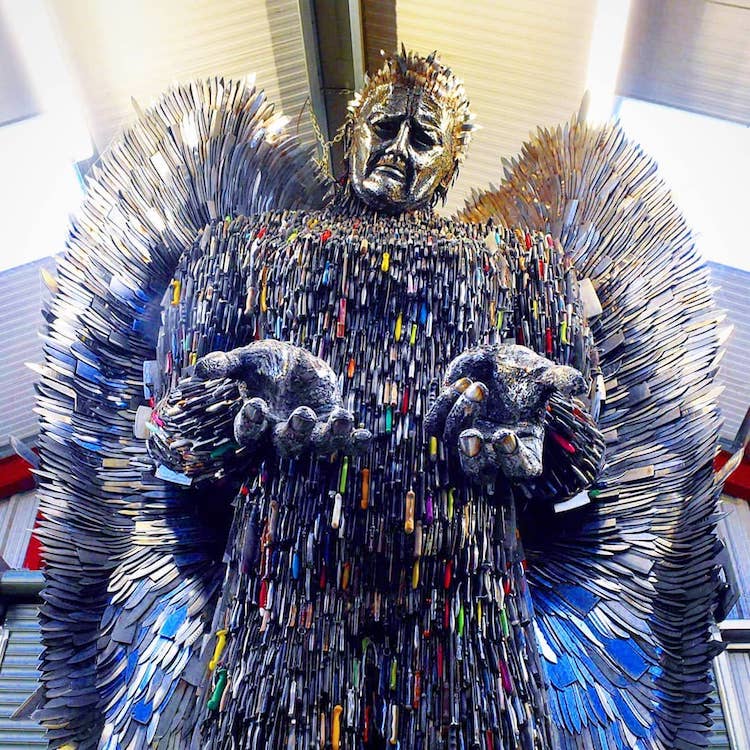 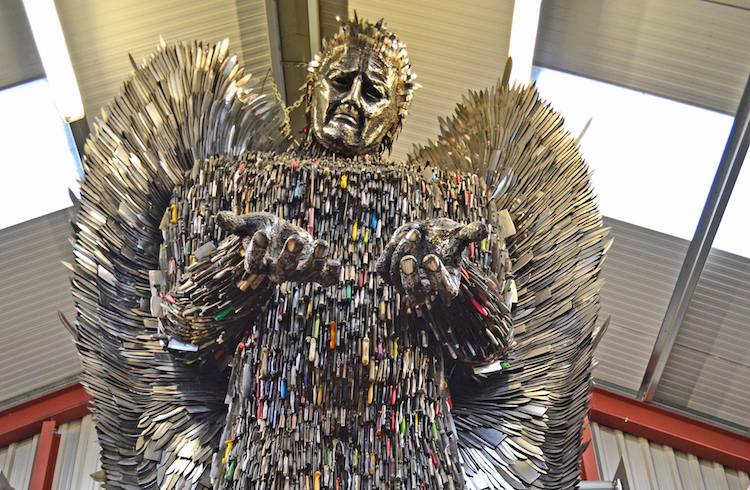 The Surrender a Knife, Save a Life program continues today in an effort to bring down the number of stabbings across the UK. 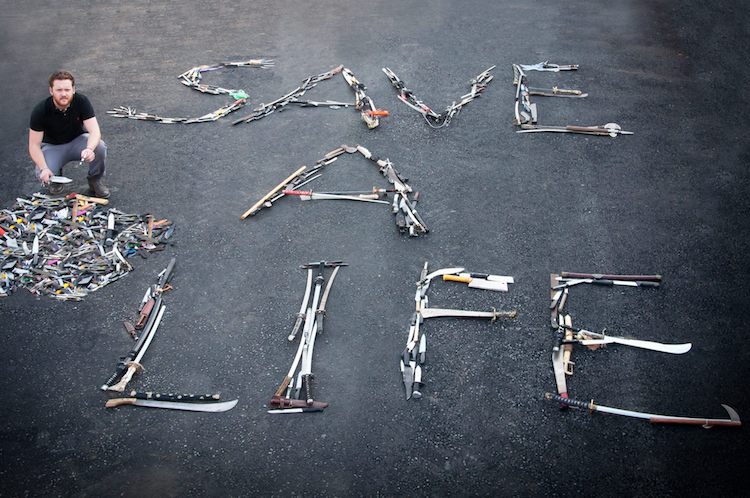 My Modern Met granted permission to use photos by Alfie Bradley.