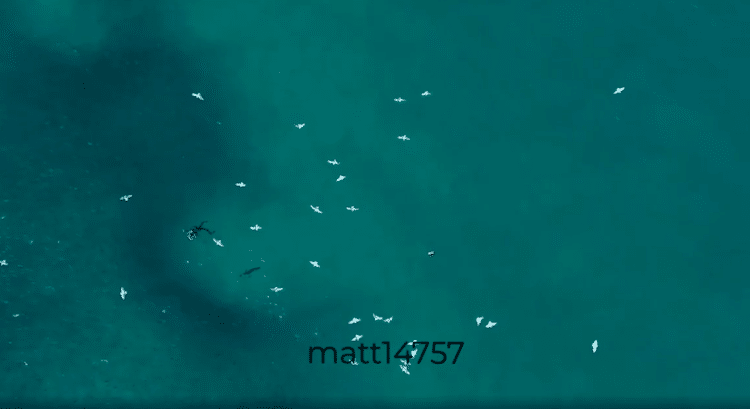 When Matt Woods sent his drone up for a view of the ocean, he never could have imagined what he'd see. As his Mavic 2 Zoom took off from his balcony on Australia's Bondi Beach, it moved over the open water and that's when Woods saw something unforgettable. On his screen, he clearly saw a large shark circling. Then, Woods noticed that it was swimming near a spear fisherman, who was using his spear to keep the shark at bay.

The scene appeared menacing enough that Woods was immediately concerned. “The diver was fending the shark off and poking it with his spear gun,” said Woods. “The shark then went after his float that is attached to the diver. He was charging it and trying to bite it, thrashing it about.”

Woods continued to monitor the diver and the predator, which appeared to be a mako shark, even after he called lifeguards to alert them to the situation. It took about 30 minutes until a lifeguard jet ski was able to clear the shark from the area. In the meantime, the fisherman continued to tussle with the shark while Woods watched in order to be able to give a precise location to authorities.

The amateur drone photographer was relieved when he saw the diver scramble up on some rocks after the lifeguard cleared the waters. While Woods then made his way to the beach in hopes of meeting the diver he'd just saved, he wasn't able to find him. Perhaps now that the story has made headlines, they'll get a chance to meet.

To be clear, encounters like the one that Woods saw are quite rare. Since 1580 there have been only nine recorded unprovoked attacks by a mako shark and only one of those was fatal. Spear fishermen can be more vulnerable to undesired attention by sharks because they may have dead fish with them. However, it's hard to know precisely the species of the shark and the circumstances around what Woods saw without having an account from the diver. Whatever the case, the diver was certainly lucky that Woods took his drone out that day.

This stunning footage shows a diver off Bondi Beach tussling with a mako shark. Luckily the drone pilot called lifeguards, who were able to diffuse the situation.