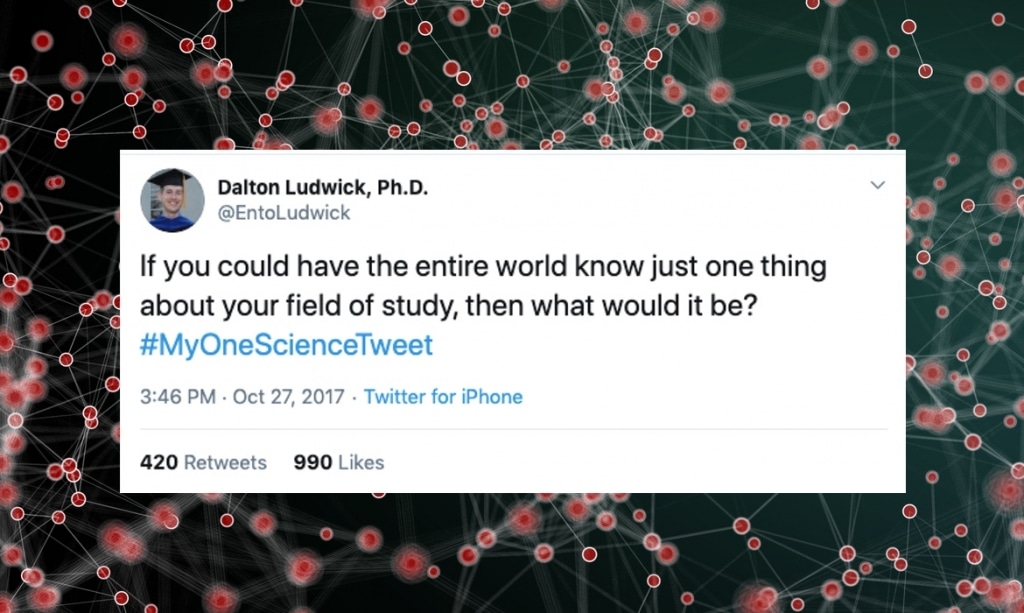 Scientists are some of the most brilliant minds in society, which can make what they do and what they know difficult for others to wrap their brains around. With that in mind, the Twitter hashtag #MyOneScienceTweet is encouraging scientists from all fields to share their knowledge with others. Started by entomologist Dalton Ludwick in 2017, it's turned into a fascinating thread for scientists to share facts, dispel myths, and shut down misconceptions.

Whether discussing important issues like climate change or reinforcing scientific facts around vaccines or simply having a laugh at everyday science blunders, the thread is a wealth of information. Two years later, #MyOneScienceTweet is as active as ever. For any layperson who was interested in picking the brain of a scientist, it's the perfect way to dive into the mysteries of the scientific world.

From physicists and biologist to linguists and anthropologists, there are a wide array of professionals who have chosen to represent their field publicly. Some facts will surprise you, while others will encourage you to investigate further.

Let's take a look at some of the interesting facts shared through the #MyOneScienceTweet on Twitter.

Although opinions on the exact numbers vary, at least 50% of the cells in your body are not actually human, they’re microbes. We all are more than 50% bacteria. #MyOneScienceTweet

Some fungi have more than 20,000 sexes. But we can't tell them apart by how they look. Only the fungi know. #MyOneScienceTweet

5 billion people do not have access to #SafeSurgery when needed, making surgically treatable conditions responsible for over 17 million deaths every year, equaling more than 1 EVERY 2 SECONDS. #GlobalSurgery #SurgeryUHC #MyOneScienceTweet pic.twitter.com/WwlnPpfxtA

#MyOneScienceTweet
Diatoms are microscopic algae, so important to life on the planet that, if they disappeared, much of everything else would go as well. They comprise most of the phytoplankton in the ocean and periphyton in rivers. #godiatoms #diatoms https://t.co/ik1j65qZ7W

You benefit from the findings of climate science every day, whether or not you believe humans are causing climate change #MyOneScienceTweet https://t.co/9Tcm7hXPFY

Ichthyosaurs and Pterosaurs are NOT dinosaurs.

Often we learn more about our own behavior.

When you accidentally swallow sea water while on holiday… this is what your consuming #MyOneScienceTweet pic.twitter.com/I6TqfNB2ce

Just because a psychological thing is connected to certain brain mechanisms doesn't mean it's hardwired or unchangeable. #MyOneScienceTweet https://t.co/cdSovuNusi

Much of what we hold to be true now will be proved wrong in the future.

This is part of the process.#MyOneScienceTweet

Once our basic physical needs are met, all misery and wellbeing is bound up in our relationships with one another. #MyOneScienceTweet

Other times scientists are breaking down common misconceptions.

There are over 200 types of cancer, and over 7 billion unique genetic codes on this planet that cause it.

There will never be a “cure” for cancer. #MyOneScienceTweet

#MyOneScienceTweet#Autism is a spectrum. This means that some people need a lot of assistance and others don’t. It’s still a valid diagnosis either way. It isn’t a #disease . It isn’t the end of someone’s future. It is a disability that many people live with.

Cochlear implants are tools, but do not “cure” deafness nor turns #deaf children into “hearing” people.

Chemicals are not inherently bad for you. Literally everything is a chemical. #MyOneScienceTweet

Not all bacteria are bad or cause infections. You need E. Coli in your gut. You can also be colonized and not show any symptoms. #MyOneScienceTweet https://t.co/BAZDVrgyaU

There is no incorrect language or dialect. We arbitrarily judge the language used by those historically in power as being “correct.” This is why colonizer dialects (Spanish in Spain, English in England) are evaluated more highly.
#MyOneScienceTweet

And every once in awhile, they even make us laugh.

Sulfites don't give you a headache when you drink wine! Alcohol does! #MyOneScienceTweet

Flies are NOT dirty – they spend more time cleaning themselves than humans.. #MyOneScienceTweet https://t.co/fYE0AwtqyB

I don’t swim with dolphins at work. (And prefer ‘marine science’ to ‘marine biology’) #myonesciencetweet pic.twitter.com/k2q73sVclq

Want to optimize something? See how Nature has been doing it.#MyOneScienceTweet #biomimetics https://t.co/uWqoPxbQRR