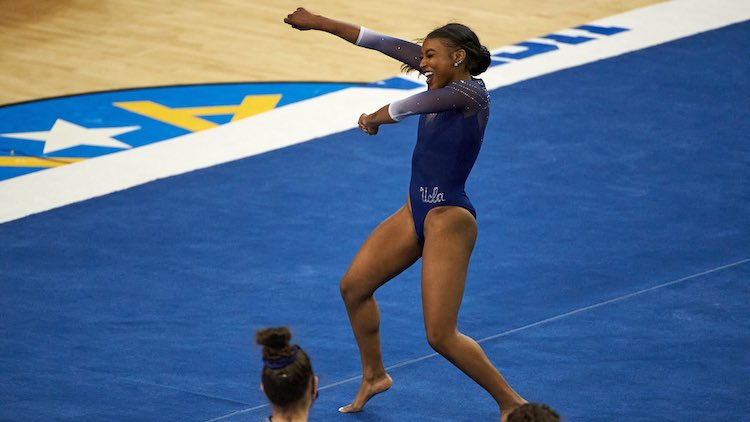 After going viral last year for her floor routine inspired by Beyonce’s Homecoming, UCLA gymnast Nia Dennis is back with another jaw-dropping performance. On January 23, Dennis wowed the judges with a floor routine set to a medley of music by Black artists, including Kendrick Lamar, Beyoncé, Missy Elliott, Soulja Boy, Megan Thee Stallion, and Tupac Shakur. And, in addition to her gravity-defying leaps and tumbles, the talented gymnast also incorporated some stepping into her routine as a tribute to her father, who was in a fraternity.

Dennis used her performance as an opportunity to celebrate Black culture and to represent who she is as a person—in addition to displaying her phenomenal gymnastics skills. The judges were clearly impressed because she received a score of 9.950 for her impressive floor routine. UCLA Gymnastics later shared a video of the performance on Twitter, with the caption: “This is what #blackexcellence looks like.” It has since garnered major attention, with thousands of likes, comments, and retweets—including responses from Missy Elliot and fellow gymnasts Katelyn Ohashi and Simone Biles.

okay @DennisNia do the damn thing girl 🔥 this was so fun to watch! keep killing it! https://t.co/eDntwMpC4R

And the gifted gymnast has definitely taken notice.

all of these incredible people i drew inspiration from, looked up to, & idolized literally know MY name. 🤯this is insane i couldn’t be more grateful.💕 truly, thank you for all the love !

All images via UCLA Gymnastics.