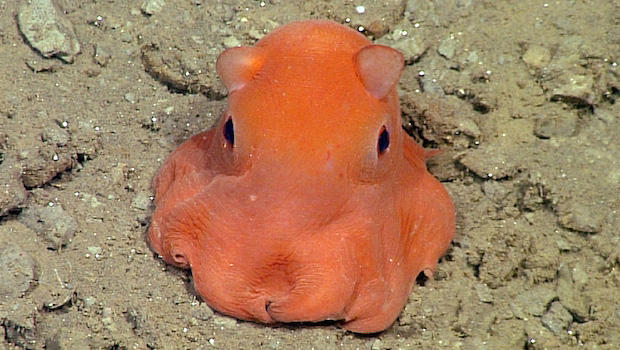 Out of all the mysterious creatures who call the deep sea their home, this little octopus may be the cutest! The rare specimen, who belongs to the Opistoteuthis genus, may even be named for its adorable appearance, according to researchers who are studying it. “As someone that's describing the species you get to pick what the specific name is,” Stephanie Bush, postdoctoral fellow at the Monterey Bay Aquarium Research Institute, told Science Friday. “One of the thoughts I had was making it Opisthoteuthis Adorabilis–because they're really cute.”

Bush has been studying the cephalopod by examining dissected specimens as well as eggs. Scientists have collected and observed the species since 1990, but little is known about the gelatinous creature besides its distinctive webbing between the tentacles, its parachute-like floating motion in the water, and–of course–how very squishy and cute it is!