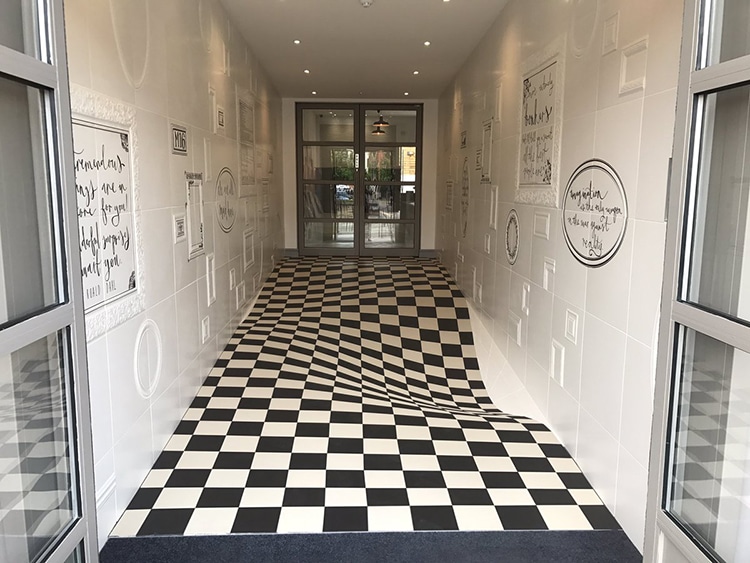 At first glance, you might think that this floor looks too warped to cross safely. It looks like it’s sinking in on one side, but it’s actually perfectly flat. This award-winning wonky walkway can be found at the Casa Ceramica showroom in Manchester, England. The checkerboard design—which comprises 400 custom-cut porcelain tiles—creates an optical illusion that works from the perspective of the front door.

Installed at the entrance of one of Casa Ceramica’s Manchester showrooms, the optical illusion serves a dual purpose. As visitors enter, the ground before them is designed to awe them with its mind-bogging visuals and, ultimately, stop them in their tracks. With the floor appearing to have melted—with only a narrow curved path to cross over—passersby are encouraged to walk, not run, through the Alice in Wonderland-like hallway. (Edit: The designers didn't install the flooring to specifically stop people from running, but it certainly encourages people to take a moment to admire the illusion.)

To complete their storybook entrance, Casa Ceramica commissioned local artist Myro Doodles to hand-paint quotes from the famed novel, as well as quotes from Roald Dahl’s Willy Wonka, and Tony Walsh's poignant poem, “This is The Place,” in memory of the victims of the Manchester attack in May 2017.

Check out this mind-boggling hallway, made entirely out of tiles.

They are actual tiles pic.twitter.com/7HvTqz9jHP

It's an optical illusion that is anamorphic, meaning you can see the illusion from one perspective, but it's distorted from other angles.

Correct, here is the view back the other way @casaceramica pic.twitter.com/c6LaVIw1sW

The Casa Ceramica team shows how to navigate wonky walkway.

All images via Casa Ceramica.