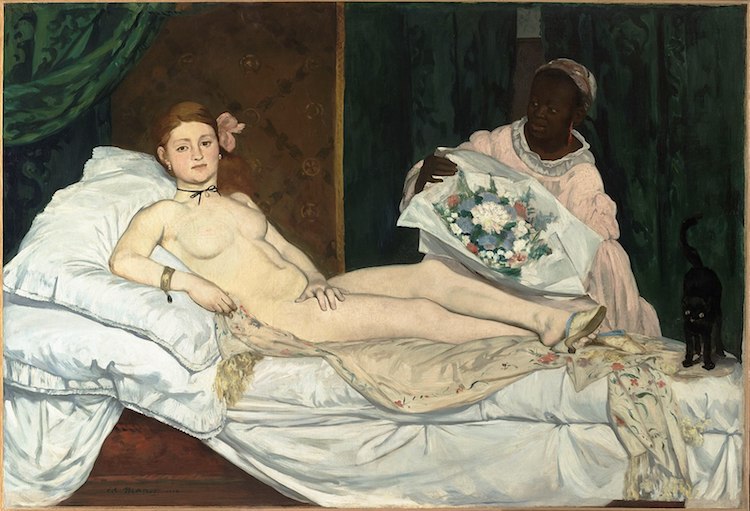 In the 19th century, several major art movements emerged in Europe, including Realism and Impressionism. Though drastically different in style, this pair of genres had one important artist in common: Édouard Manet. Manet's groundbreaking work both blurs the line and bridges the gap between the distinctive movements, with the world-famous Olympia serving as a key example.

Through a contemporary lens, Olympia is embraced as an important precursor to modern art. However, when Manet revealed this piece at Paris' prestigious salon, both its subject matter and style caused an unprecedented stir. Ironically, it is this scandal that would play a pivotal role in the painting's eventual fame and that would help put Manet's name on the map. 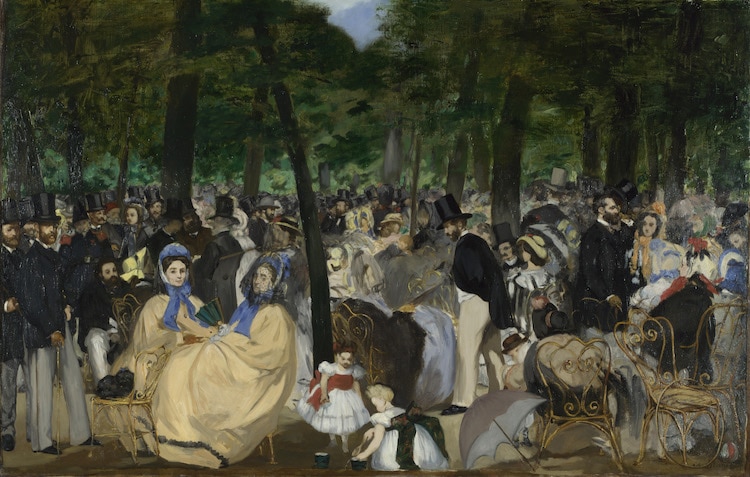 In 1850, French painter Édouard Manet launched an art career in Paris. At this time, he worked in the studio of academic painter Thomas Couture and spent his time copying masterworks in the Louvre. With such traditional influences, it is no wonder that Manet's early work typically favored religious, mythological, and historical subject matter.

In 1860, however, Manet's work began to hint toward a new and avant-garde approach. With works like The Spanish Singer and Music in the Tuileries—painted in 1860 and 1862, respectively—he abandoned conventional iconography in favor of contemporary subjects. While these works were met with mostly positive reviews by critics, his work the following year would turn the art world on its head.

In 1863, Manet completed two significant works: The Luncheon on the Grass and Olympia. Featuring nude female figures from everyday life rendered realistically and on a large scale, these works were unprecedented. While The Luncheon on the Grass was rejected by the Académie des Beaux-Arts, the organization responsible for France’s annual art salons, Olympia was accepted—though its exhibition was not without controversy. 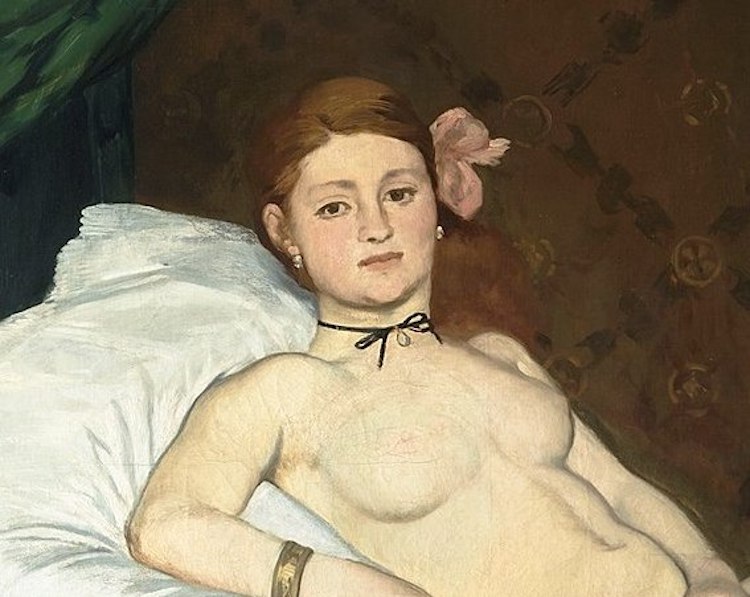 Olympia features two figures: a nude (modeled after Victorine Meurent, who also posed for The Luncheon on the Grass) lounging on a bed and a servant standing at its foot. Both the reclining figure's nudity and position allude to past works, including Venus of Urbino, a Renaissance painting by Titian; Ingres' Odalisque with a Slave; and The Nude Maja, one of Francisco Goya's most famous paintings.

Unlike these past works, however, Olympia was reviled for presenting the “cold and prosaic reality of a truly contemporary subject.” This reaction was primarily fueled by three characteristics of the painting. The first is that Olympia, the nude figure, was intended to be a prostitute—an element emphasized by the symbolic presence of a black cat and a bouquet of flowers.

The second, surprisingly, is her accessories; the black ribbon she wears on her neck, the orchid in her hair, and her slung-off shoe accentuate her nudity while simultaneously illustrating Olympia's own comfort with her lifestyle.

Lastly, the figure's self-assured and straight-ahead gaze was viewed as controversial. Also evident in The Luncheon on the Grass, Manet's inclusion of a female nude with a “calculating look” was strategic, as it connects the viewer to the canvas and allows them to engage with Olympia.

In addition to its blatant sexual undertones, critics were displeased by Manet's realistic rendering of the figure, whose coloring was compared to “the horror of the morgue” and whose hands and feet were referred to as “dirty” and “wrinkled,” respectively.

It is this authenticity, however, that garnered the approval of Manet's friends and fellow creatives. “When our artists give us Venuses, they correct nature, they lie,” writer Emile Zola said in 1863. “Manet asked himself why lie, why not tell the truth; he introduced us Olympia, this fille of our time, whom you meet on the sidewalks.”

Manet's decision to depict an everyday person in an ordinary setting is what placed him at the forefront of both the Realist and Impressionist movements. Though he believed his work more closely resembled Realism, he began working and exhibiting with the Impressionists in 1868, culminating in a career-long relationship with the movement.

“When you look at it,” Manet remarked about a painting's subject, “and above all, when you see how to render it as you see it, [that] is, in such a way that [it makes] the same impression on the viewer as it does on you.” 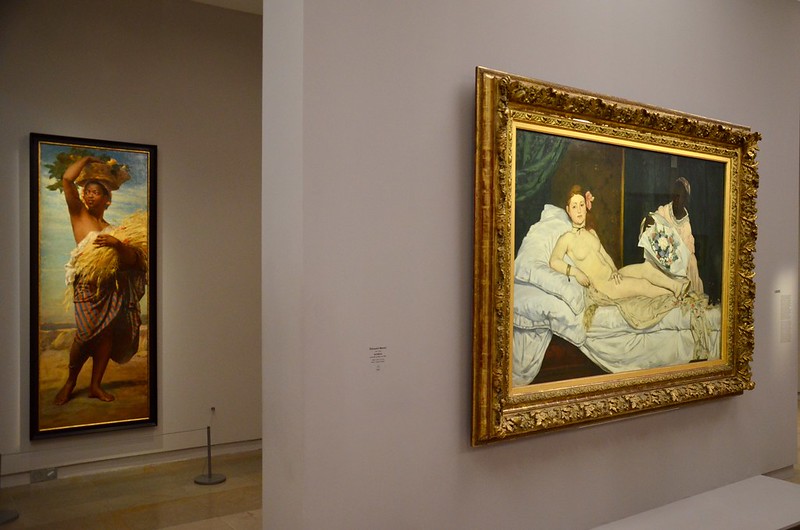 Along with The Luncheon on the Grass, Olympia currently hangs in Paris' Musée d'Orsay. While it has been a tried and true highlight of this museum for decades, it continues to inspire new debates and dialogues.

Specifically, the role of the black servant—modeled after a woman named Laure—has finally come into the spotlight. Following a string of studies on Laure, the Musée d'Orsay has made her a focal point of Black Models: from Géricault to Matisse, a recent large-scale exhibition. Taking a multi-disciplinary approach to a multi-layered concept, Black Models explored the role of Laure and other black figures in art in order to offer an unprecedented look at the “aesthetic, political, social and racial issues as well as the imagery unveiled by the representation of black figures in visual arts.”