By Madeleine Muzdakis on November 3, 2020 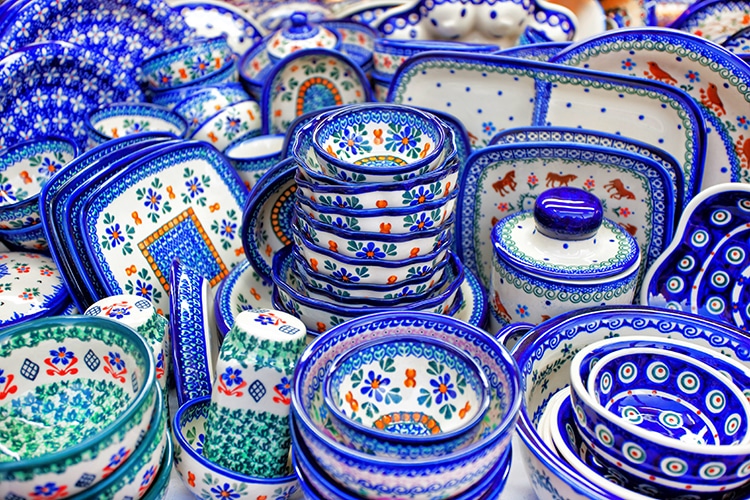 In a small city in southwest Poland, some of the world's most beautiful pottery is produced for sale around the world. The stoneware known as Bolesławiec pottery—named after the medieval city of Bolesławiec—is popular among collectors and bakers alike. The classic organic designs in cobalt, green, and red paint complement the natural cream of the local clay. Today, modern designs build upon the traditional as the craft is an important element of Polish culture and folk art. To fully appreciate contemporary examples of this eye-catching craft, one would have to take a look back at the history of Bolesławiec wares.

The town of Bolesławiec—in present-day Poland—has a long history of producing quality pottery which was coveted across Europe. Nestled into a region known as Silesia, evidence of active potters' workshops in the city dates from the 15th century. By 1511, a guild of potters had been established to regulate access to the craft, as was customary in late-medieval Europe. The early pottery products of these workshops were stoneware vessels fired from the fine local clay. The jugs and tankards were decorated with raised patterns and covered in a brown slip glaze. Tin, silver, or pewter tops could be added. 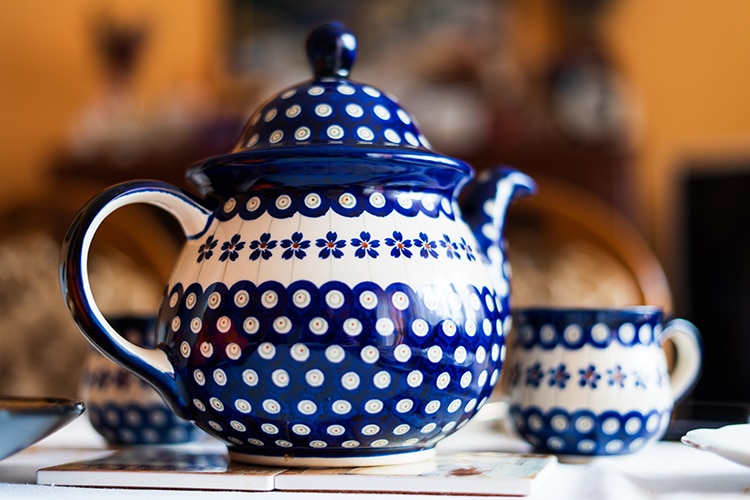 The 18th century brought innovation in styles and materials. Bolesławiec became a part of the Kingdom of Prussia in 1742. This new unity with Germanic lands brought an influx of potters to the region. The Prussian rulers took an interest in Bolesławiec pottery (Bunzlauer in German) and encouraged its growth by facilitating the exchange of ideas between local potters and renowned professors of art. To meet new consumer needs, potters produced new items such as coffee and tea pots. New techniques of molded reliefs glazed in white were added on top if the classic brown background of vessels. Potters also experimented with “cold-pained” overlays of heraldry and religious iconography. 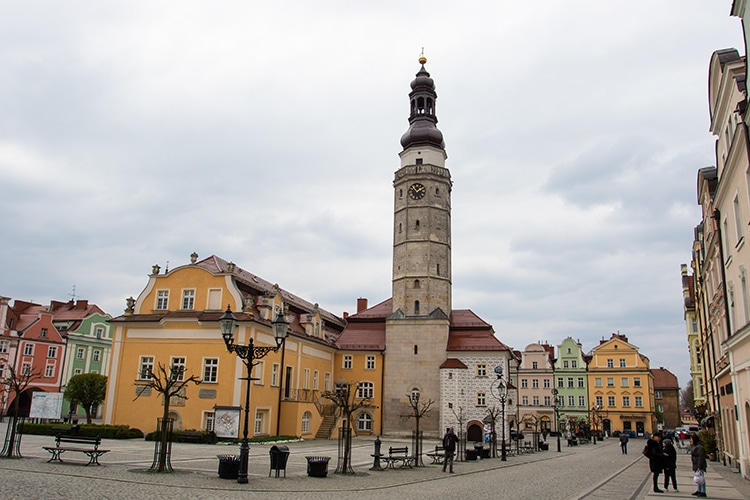 During the 19th century, Bolesławiec pottery developed the classic look seen today. The most influential figure in this development was Johann Gottlieb Altmann. In addition to refining the purity of the clay used, Altmann developed a feldspar-based clear glaze to replace the more expensive, brown glaze (which contained lead, a recently discovered hazard). He also began to cast vessels rather than using traditional wheel techniques. Inspired by classical designs, Altmann's work won international recognition and inspired much interest in Bolesławiec pieces.

By the 1880s and 1890s, Bolesławiec pottery was in high demand, with over 20 shops operating within the city. A royal pottery school was established in the city to further the craft. It was during this period that—utilizing the clear feldspar glaze—the cobalt blue and white patterns were introduced. Potters hand-cut sponges into designs, then slowly stamped their wares (hence spongeware). The fine natural clay of the region was light enough to allow for such embellishment. The potters quickly incorporated popular organic motifs typical of the Jugendstil period in Germany—known to Americans as Art Nouveau. By the early 20th century, the most iconic pattern—known as Pfauenauge, or peacock's eyes—had become popular. Art Deco designs were also produced. 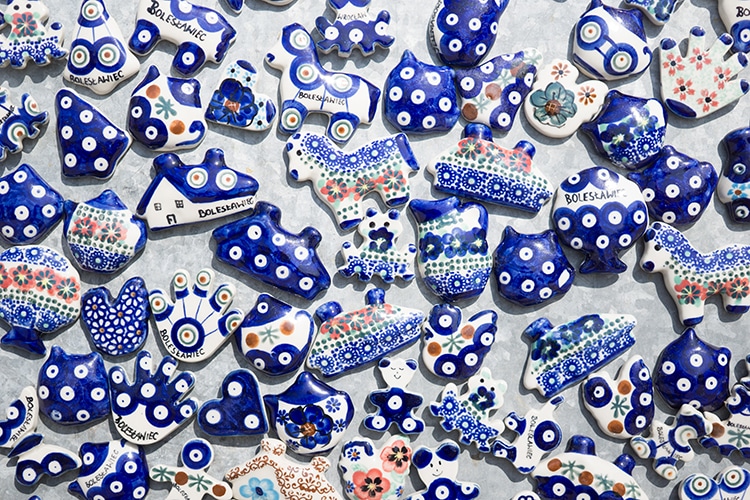 Magnets showing samples of Bolesławiec patterns, from the Ceramics Festival in 2017. (Photo: Stock Photos from MAGDALENAGALKIEWICZ/Shutterstock)

Production of the pottery encountered difficulties in the 20th century. The inter-war period in Germany was marked by a cratering economy. Although production was increasingly industrialized and airbrush and stencil techniques made hand-finishing pieces easier, potters had to band their workshops together to survive economically. World War II proved a radical shift in the history of both the region and Bolesławiec pottery. A defeated Germany forfeited Silesia to Poland, and the German residents of Bolesławiec were expelled. Many continued their craft in East or West German towns, but Bolesławiec was left mostly bereft of artisans.

A strong Polish government effort began in 1946 to rescue the traditional folk art. Factories were rebuilt and ceramic artists recruited from elsewhere in Poland. Now under communist rule, pottery became a cooperative much like other production. The CPLiA Cooperative was founded in 1950, and its training programs produced countless new artisans to carry on the craft. A post-communism version of the cooperative is still active in producing traditional pottery today. 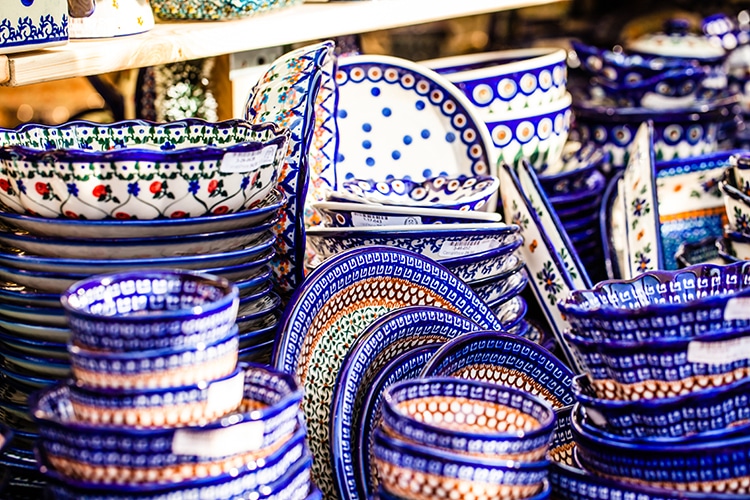 Bolesławiec pottery is still produced today. Often referred to internationally as Polish pottery, it is a popular collectable in the United States and internationally. Each piece is hand-crafted, building on the long-established traditions of the region. The pottery is still made from local white clay fired to extreme temperatures. Each piece is hand-stamped with free-hand details and coated in a lead-free glaze. The pottery may be very beautiful, but it is also extremely useful in the kitchen. As stoneware, these lovely dishes can resist the heat of microwaves and ovens while also remaining crack-free in the freezer.

Today there are several well-established producers of Bolesławiec wares, some of which date back to the post-war period. Ceramika Artystyczna, Zaklady Ceramiczne “Bolesawiec,” Cer-Maz, Manufaktura, and WR Unikat are all big names when looking for authentic wares. As cheaper fake versions may appear, be sure to research a brand before purchasing a piece. Each authentic piece should be stamped by the maker and have a distinct “Made in Poland” stamp. To help you distinguish the real from the fake, Polish Pottery Westlake provides a useful guide to stamps and producers. 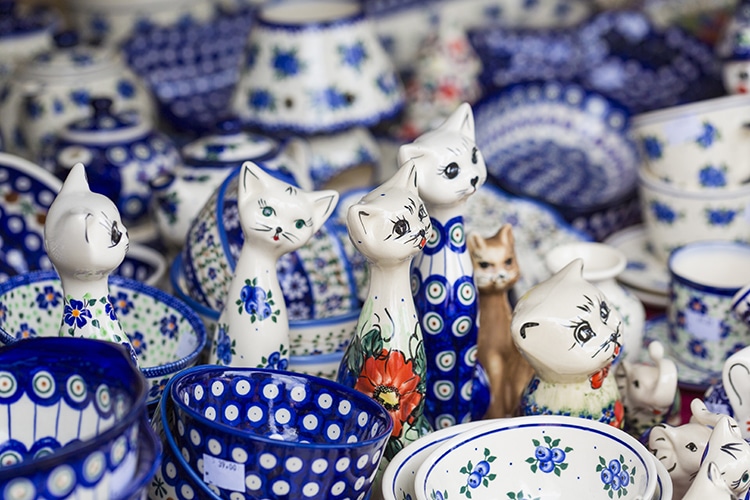 Modern producers of Bolesławiec pottery are constantly developing new designs which incorporate popular historic motifs. Some classic patterns commonly found today include the Old Poland, the Floral Peacock (a variation on the classic peacock eye motif), the Crimson Bells, and the Emerald Mosaic. Whatever your taste—traditional, modern, or bohemian—artisans have created patterns that broad audiences are sure to find appealing.

These patterns can be found on virtually any ceramic form imaginable. Spoon rests, platters, teapots, mugs, and bowls are just some of the many forms taken by Polish pottery. While they are durable, proper care will preserve these stunning pieces for generations to come.

Each piece is unique due to hand-painting, but some are true one-of-a-kind creations by the most esteemed and experienced artisans. After many years of work, an artisan reaches a point when they are able to produce their own pieces from start to finish. These pieces are identified as unikat, or unique. They are often more expensive but make excellent additions to any collection. Through works such as this, as well as pattern development, the art of Bolesławiec pottery continues to develop. 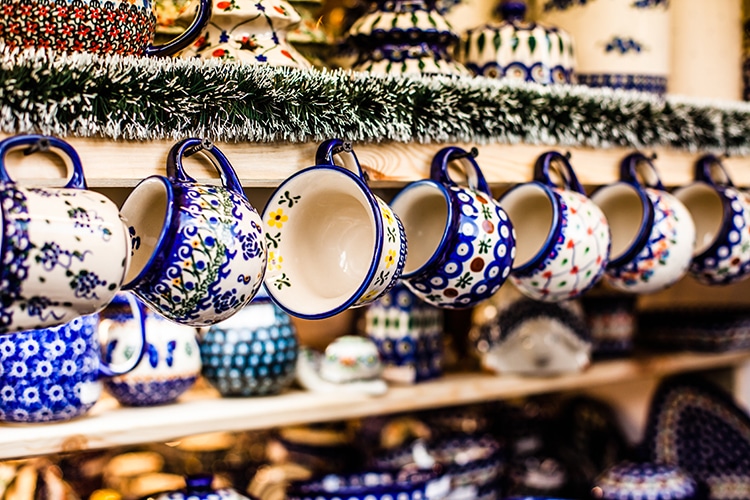 Where to Buy Polish Pottery

Always be sure to do your own research and check for the proper stamps to ensure you receive authentic Bolesławiec pottery. Many online sites allow for easy international purchase. Ceramika Artystyczna is a collective of artisans who offer a wide variety of wares online. About 70% of the artisans are women, so you will also be supporting them. Other marketplace-style websites carry multiple brands, such as Polmedia and Polish Pottery House. Many local shops in your city may also offer this lovely pottery. Happy collecting!