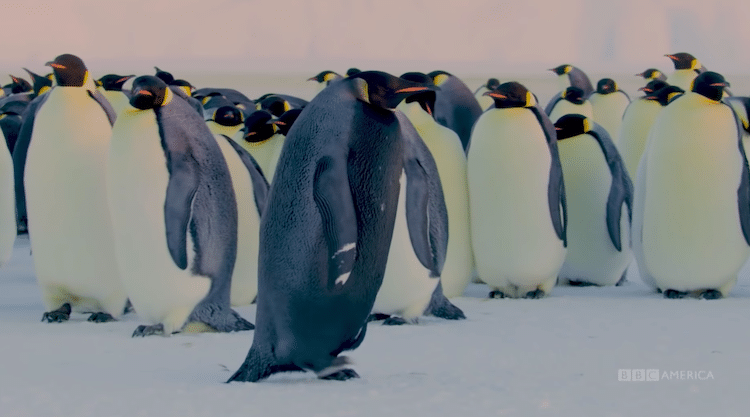 Filmmakers from the BBC were in for a surprise while in Antarctica for the wildlife series Dynasties. In the midst of a group of emperor penguins, one special member of the flock really stood out. An incredibly rare black penguin mixed in with the crowd and the BBC has stated that “this could be the first-ever footage of an all black emperor penguin.”

The emperor penguin's all black appearance is due to a genetic mutation known as melanism. This is the same condition spotted in an African black panther in Kenya, but instances in penguins are even rarer. The mutation causes an overabundance of melanin, making skin, fur, and feathers appear black. The BBC clip poses the question, “Is this the rarest penguin on Earth?” While that might seem overdramatic, it certainly could be the case given the rarity of the condition.

Black penguins are more visible to predators, both on ice and in the water. Penguins' white bellies help them blend in while swimming, as they mix in with light on the surface of the water, making them appear invisible to predators. The fact that the emperor penguin spotted by the crew is an adult is quite an achievement.

Examples of black penguins are so rare that there's little to no research done on the subject. Most examples of penguins with melanism are king penguins, with partial melanism also evident in Adélie, chinstrap, gentoo, macaroni, and royal penguins. Evidence of melanism in emperor penguins is quite a spectacular discovery, though this particular example still does appear to have some white feathers on the tip of its wings and a small patch on its chest.

One thing's for sure, the footage could very well be the only example of its kind. As for the state of the penguin itself? The crew happily reported that the black emperor penguin appeared to be doing just fine, huddling for warmth with the others and going about its business.

Watch this footage of a rare black emperor penguin filmed by the BBC.