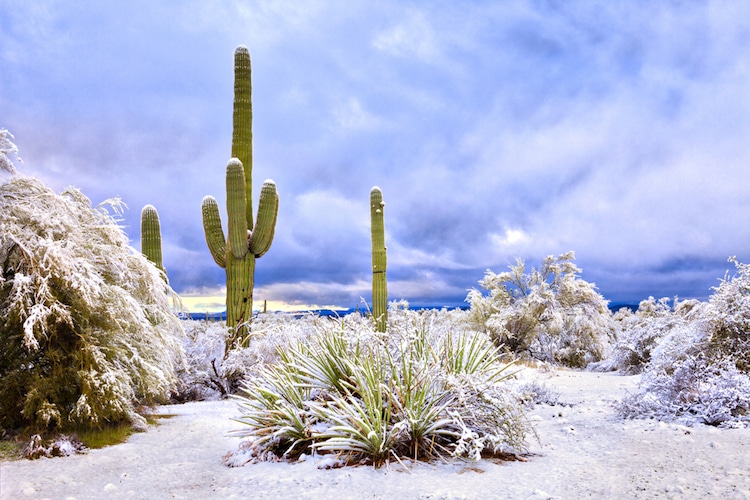 It’s not often you see snow in Arizona, but when you do, it’s pretty magical. In recent weeks, unusual wintry weather has arrived to the Sonoran desert transforming the dry, red rocky terrain into an otherworldly winter wonderland.

Beautiful pictures from locals have emerged recently, showing how the snow has dusted the region’s iconic saguaro cacti and blanketed the mountains of Arizona and New Mexico. Scenes from the Grand Canyon on New Year’s Day show the immense landscape looking ever more spectacular in a layer of powdery white snow. The city of Tucson had reportedly 0.4 inches (1 cm) inches of snow, while Arizona had up to 18 inches (46 cm). Meanwhile the Los Alamos and Mountainair areas of New Mexico reported having 20 inches (50 cm) of snow. Even Southern California had a flurry or two.

The strange weather was due to a deep pool of cold air at high altitudes that has been swirling over the region since the end of December. The cold spell won’t last long though, with much milder conditions due to return within a couple of days.

A rare spell of winter weather has brought snow to Arizona and New Mexico. 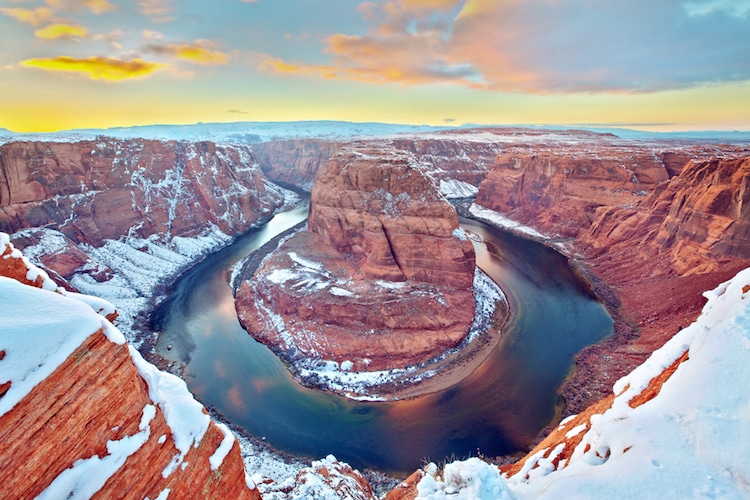 The spectacular terrain looks even more beautiful blanketed in snow.

Snow in Sedona Arizona #Magical ❄️❄️🥰 Have a great day out there, and stay warm… pic.twitter.com/eguI9MUH8r

Seeing the Sonoran Desert capped with snow might be my favorite yet 😍😍 Look at the saguaros asking for hugs to stay warm?! 💙 pic.twitter.com/OWMSPTrhWG

Snow in the Sonoran Desert is such a beautiful and otherworldly sight. #tucson #arizona #sonorandesert #snow pic.twitter.com/2FgQBCtaM1

Another look at the snow this morning in Saguaro National Park. Such a beautiful scene! #azwx pic.twitter.com/bkkIdK8Dkr

Snow – in the Grand Canyon of USA
New Years kicks off to a neat start 2019 pic.twitter.com/uGmhAo4k8w

Good morning, New Mexico! Here at our office, we picked up about 2 inches of snow yesterday. How much did you get? Let us know and where you are located! #nmwx pic.twitter.com/MrMzZrH5wR

Here's a nice GOES-16 satellite image that depicts snow (in orange) and fog (in white) across AZ this morning. #azwx pic.twitter.com/Txso2d2vGP