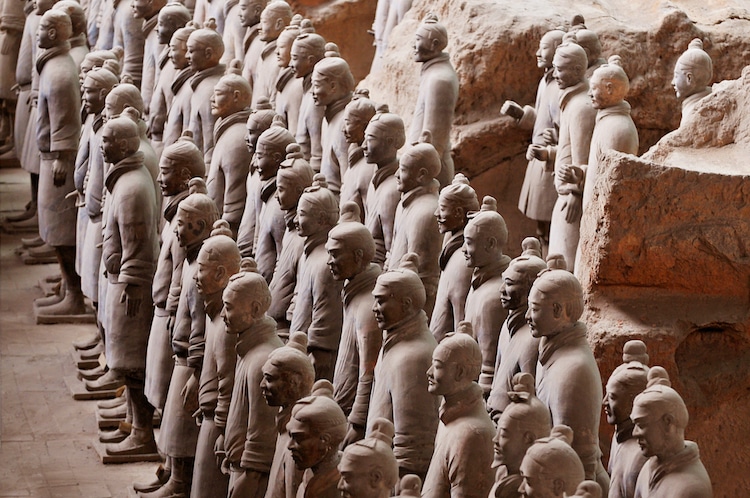 The Terracotta Army or the “Terra Cotta Warriors and Horses” buried in the pits next to the Qin Shi Huang's tomb, Xi'an China (Photo: Cezary Wojtkowski via Shutterstock Royalty-free stock photo)

Today, the unexpected unearthing of the Terracotta Army—a hoard of legendary, life-sized clay soldiers intended to fill an emperor's elaborate mausoleum—is renowned as one of the world's greatest archaeological events. Discovered in northwestern China and dating back to its first dynasty, the ceramic figures have shed light on the country's ancient artistic practices and age-old burial rituals.

In addition to offering a glimpse into Imperial China's distinctive approach to funerary art, the sculptures are also celebrated for their scale—both in terms of each individual sculpture's height and of the group as a whole.

Here, we present the history of the Terracotta Army, including its creation in the third century BCE, discovery in the 1970s, and its legacy in contemporary culture. 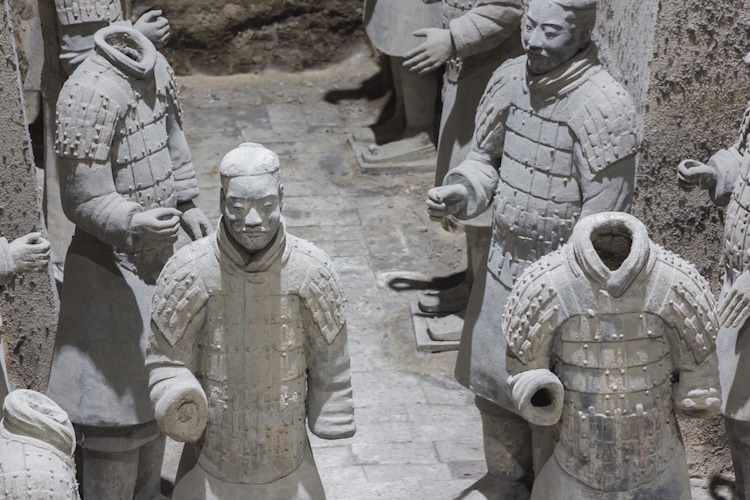 The Terracotta Warriors of the famous Terracotta Army inside the Qin Shi Huang Mausoleum of the First Emperor of China (Photo: Pheniti Prasomphethiran via Shutterstock Royalty-free stock photo)

In 246 BCE, Qin Shi Huang, China's first emperor, took the throne at just thirteen years old. As ruler of the first Imperial Empire, he is credited with several accomplishments, including standardized scripts and coins, the construction of the Great Wall, and the overall expansion and unification of the state. 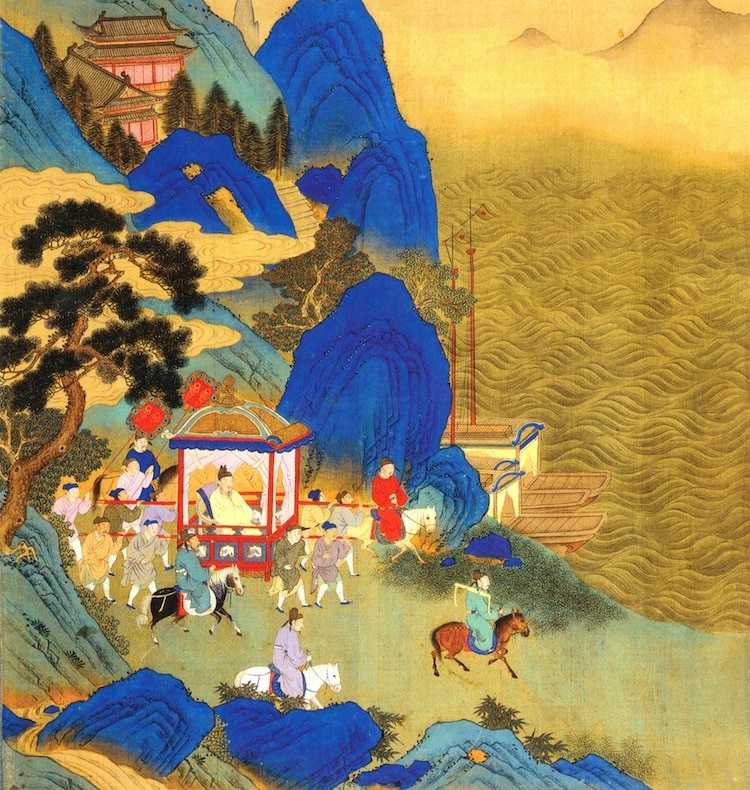 To celebrate his triumphs and memorialize his life, he ordered the construction of a necropolis in Xi'an, a region dotted with jade mines and rich in gold. He envisioned a complex mausoleum filled with his precious earthly possessions—including rare jewels and architectural models—as well as thousands of specially-made terracotta soldiers to protect him in the afterlife. 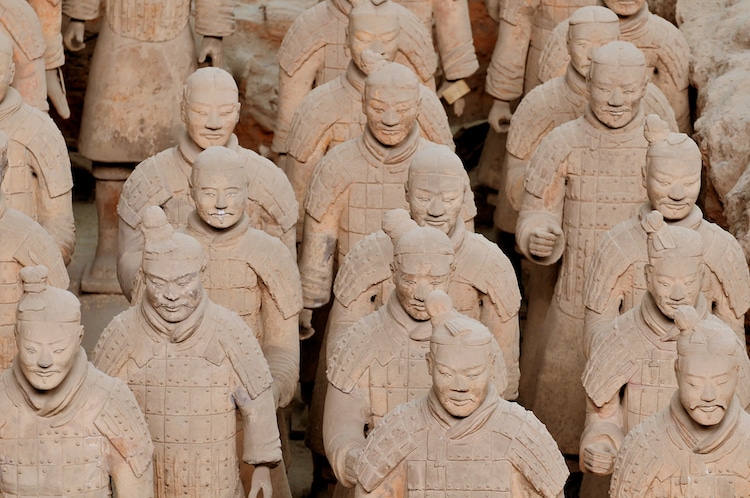 Though 7,000 laborers dedicated decades to constructing the over-the-top tomb and necropolis, the site was left unfinished when Qin died in 210 BCE.

For centuries, Qin Shi Huang's massive mausoleum remained undetected. However, in 1974, workers stumbled upon a large sculpture of a terracotta warrior while digging a well. Prompted by this surprising find, archaeologists began to explore the area, resulting in the discovery of thousands of similar soldiers in four pits. 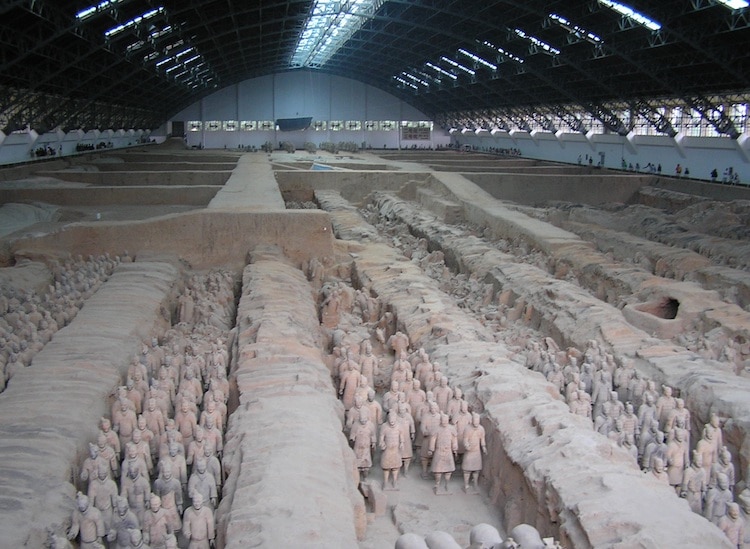 Designed with an impressive level of detail, each figure is a one-of-a-kind work of art. The life-sized sculptures vary in height according to military ranking, with their uniforms, hairstyles, and even facial shapes and expressions following suit. 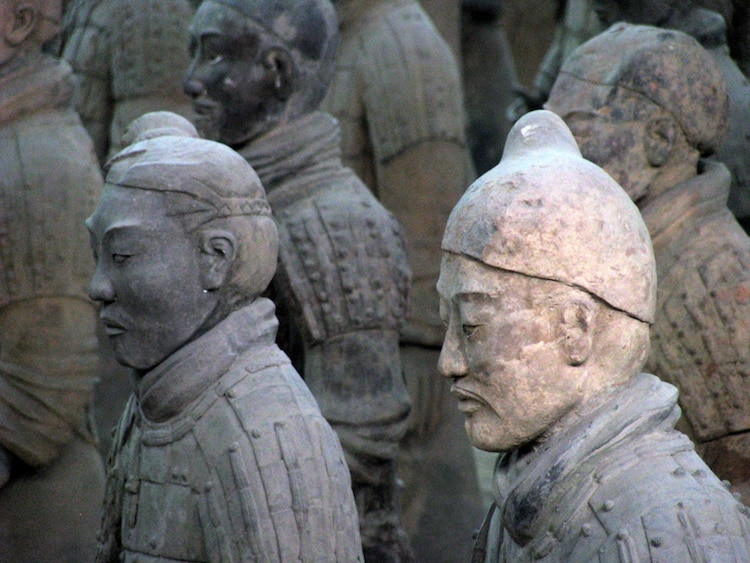 Though they appear the same shade of grey, the figures would have originally been realistically painted, accentuating their lifelike features and drawing attention to their eye-catching artisanship. 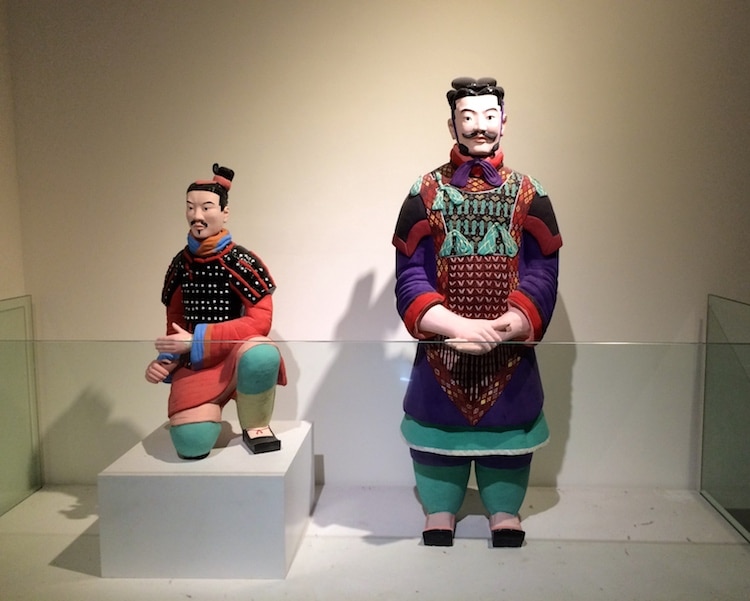 In addition to the 8,000 soldiers themselves, 130 ceramic chariots and 670 horses were also found in the necropolis. Similarly, clay figures of dancers, acrobats, and musicians were also unearthed, though these whimsical figures are greatly outnumbered by the stoic army.

How They Were Made

Historians theorize that the heads and bodies of the warriors were made via assembly line production. This entails that each individual part, such as the arms and legs, were made independently of one another to speed up manufacturing. Then, after being fired in the kiln, these various completed parts were assembled into one figure.

Due to the singular appearance of each warrior's face, it is believed that artisans added individual clay features on top of the mold for the face—perhaps based on real soldiers during the time.

Additionally, many of the terracotta warriors originally held real weapons, such as swords, spears, crossbows, and lances. Although most of these historical artifacts have been stolen, 40,000 items still remain for historians to study.

While the vast majority of the terracotta soldiers remain on-site, ten have recently appeared in overseas exhibitions, allowing international audiences to see the sculptures in-person and offering “a new generation the rare chance to view the figures up close” (the Asian Art Museum). Similarly, the sculptures also inspire contemporary artists, manifesting as reproductions made out of everything from pizza dough to paper lanterns. Regardless of material or motive, these modern reinterpretations prove the lasting legacy of the amazing ancient artifacts.