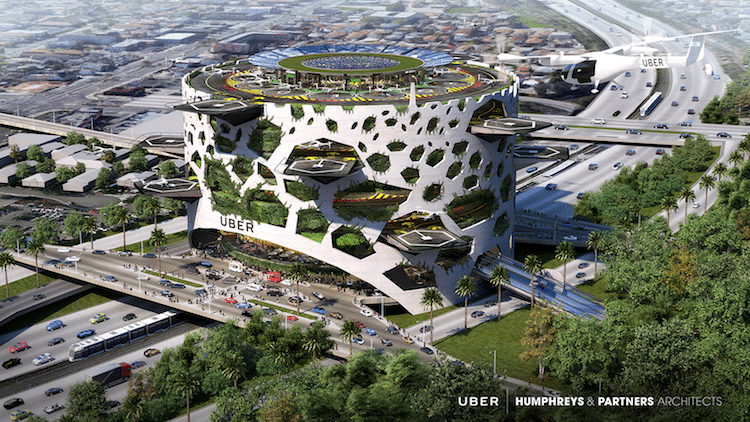 ‘Uber Hover' by Humphreys & Partners is modeled after a beehive and uses sustainable materials. Each level has a capacity of 900 passengers per hour.

After announcing its collaboration with NASA last year to develop an airborne electric taxi service, Uber unveiled new plans for uberAIR at its annual Elevate conference in Los Angeles. Aside from an updated prototype for a low-flying electric taxi, the firm also revealed a series of Skyports as conceived by six architecture, engineering, and construction companies.

The futuristic-looking Skyports would serve as departure and arrival points for uberAIR's electric vertical take-off and landing vehicles (eVTOLS), which they plan to begin testing in 2020. “While uberAIR might feel like a far away dream, it's closer than you think and urban infrastructure has to start to evolve now to keep up,” shared John Badalamenti, Uber's head of design for advanced programs and aviation.

The Skyports are designed to be located in high traffic areas, like stadiums and arenas, where they could serve large crowds in a short time. Each concept, which was submitted as part of the Uber Elevate Skyport Challenge, has a capacity for 4,000 passengers per hour over a three-acre footprint. The results are structures that look like they'd be at home on the set of a science fiction film, which pairs nicely with the futuristic images that flying cars conjure. 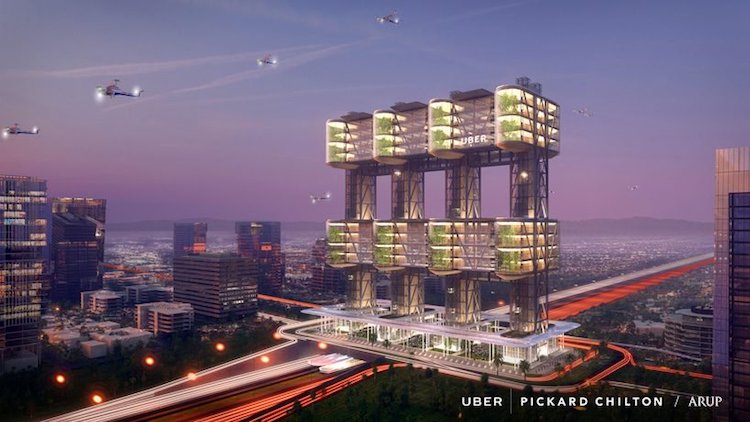 ‘Sky Tower' by Pickard Chilton and Arup is formed from stacked modules that can be built out vertically or horizontally according to the space available.

Several concepts work with stacked towers and pods, while others are spread over a large, elevated surface area. Both the Beck Group and Humphreys & Partners drew inspiration from nature—a beehive to be exact—for their concepts. Other firms, like Corgan, seized the opportunity to integrate public space into their design, with raised platforms naturally creating open plazas for pedestrians.

“While the main task of the Uber Skyport is to develop a paradigm for public access to eVTOLs, we extended it to explore how Skyports could reconnect the community, how they can become an important amenity to the neighbourhood, and how they could bridge some of the divides we see in our cities,” said John Trupiano, principal at Corgan's Aviation Studio.

After initial testing in 2020, uberAIR is expected to move to market in 2023, which means that you may see your daily, congested commute cut down to a fraction of the time. While Los Angeles and Dallas were previously announced as launch cities, Uber put out a call for a third, international launch city during Elevate. And, they're already cultivating real estate partners to puzzle together a full plan for the commercial launch. 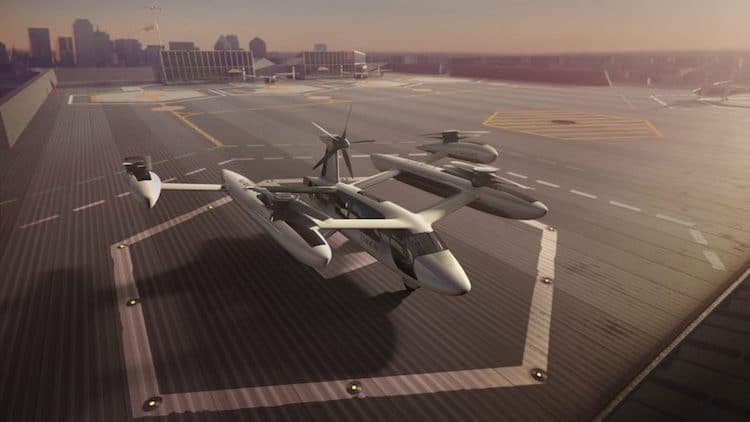 And just what will people be riding in when uberAIR launches? The prototype has already undergone several iterations (and is sure to change again prior to testing), but the newest model resembles a drone, complete with multiple, small rotors. The company says the design will make the vehicles quieter, and more efficient, than helicopters. It also provides a failsafe, as the other propellers can compensate in case of an individual propeller failure. While the current prototype won't be built, it will serve as a template for manufacturers as they begin developing their own designs.

With plans rapidly developing, it looks as though flying taxis will be here before you know it.

The finalists of the Uber Elevate Skyport Challenge have created futuristic hubs for uberAIR's flying taxis. 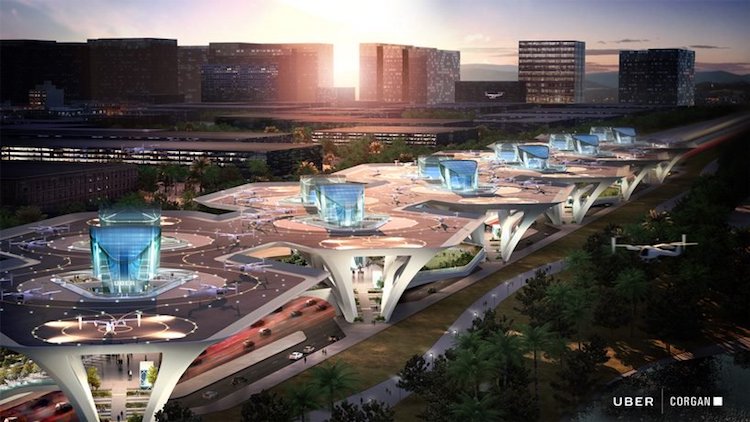 Corgan‘s ‘Connect' is a connected network of hubs that naturally form public plazas below the elevated landing pads. 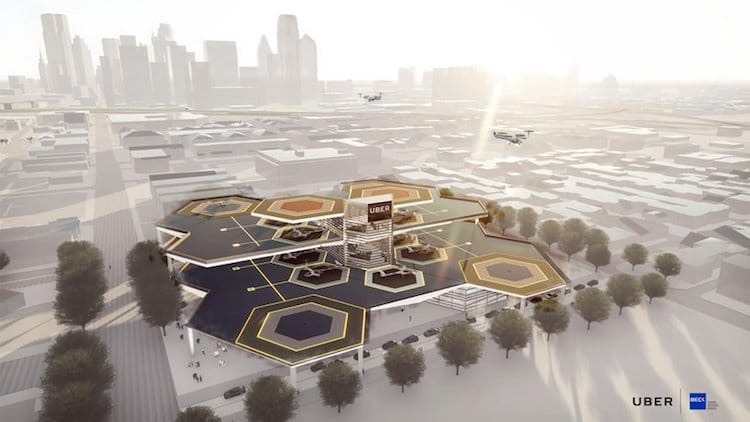 ‘The Hive' by the Beck Group can be scaled up to 1,000 takeoffs per hour and uses a honeycomb pattern in its design. 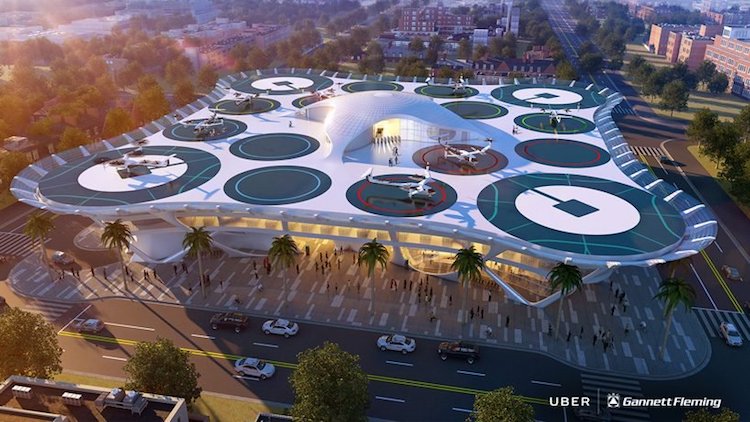 ‘The Paw' by Gannett Fleming uses robots to rotate vehicles so they are ready for immediate departure after landing. 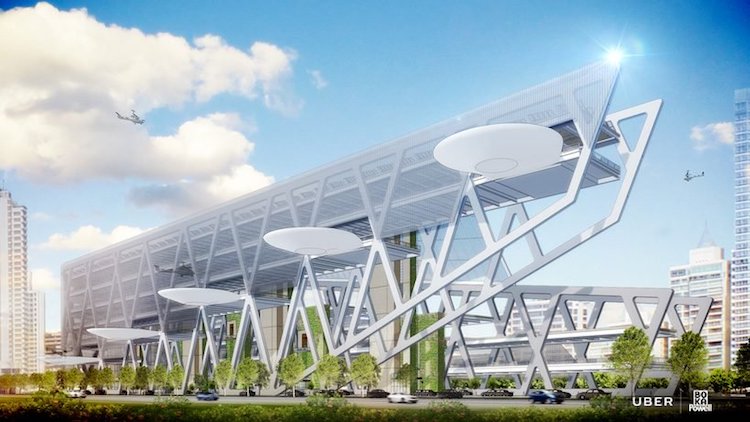 Forget About FedEx: Introducing the Cargonaut