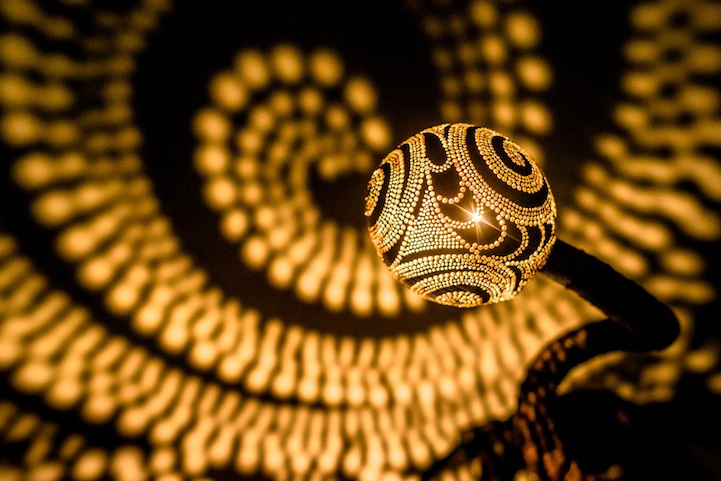 Artist Vainius Kubilius carefully crafts lamps that project visually exciting and exotic patterns of light on adjacent walls. Unlike your typical light designer, Kubilius doesn't simply work with metals and manmade materials. Instead, this creative innovator incorporates coconuts into his products, which he designs under the label Nymphs. “The head of the lamp is made out of coconut,” Kubilius tells us, “but after careful shaving, waxing, and drilling, it shines like some sort of jewel.”

It took Kubilius nine months to complete his first lamp, but he has since improved his technique and time efficiency. Now, it takes the artist only a few days to fully realize each of his creations. Despite his ability to compress the time needed for production, each lamp continues to demand the artist's astute attention to detail, not to mention his skilled hand and keen eye for design. Kubilius tells us that designing light patterns is even harder than preparing coconuts as lamp heads. “Not all light patterns look good,” he explains in an email to My Modern Met. “By creating many of them I learned what looks best and what people enjoy the most.” Ultimately, he admits, “I want people who turn my lamp on in the evenings to feel like they're in a magical place surrounded by a unique and relaxing atmosphere. Nymphs's lamps create a small oasis in every interior.”

We were lucky enough to ask Vainius a few questions about his incredibly designed lamps and the light patterns they fill their respective rooms with. You can read that brief interview, below. 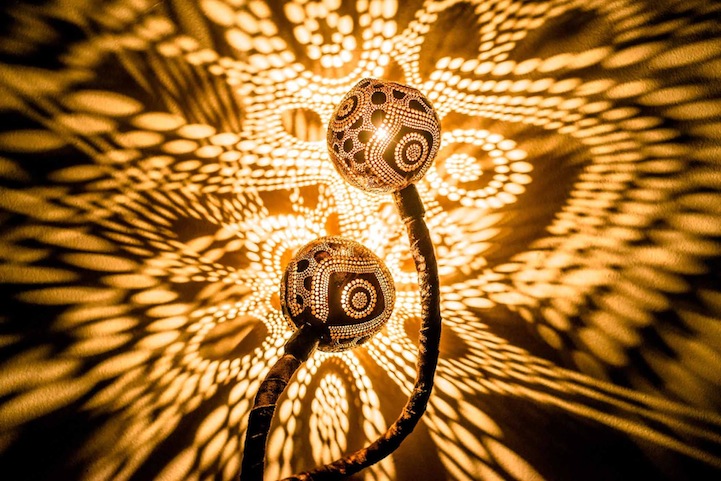 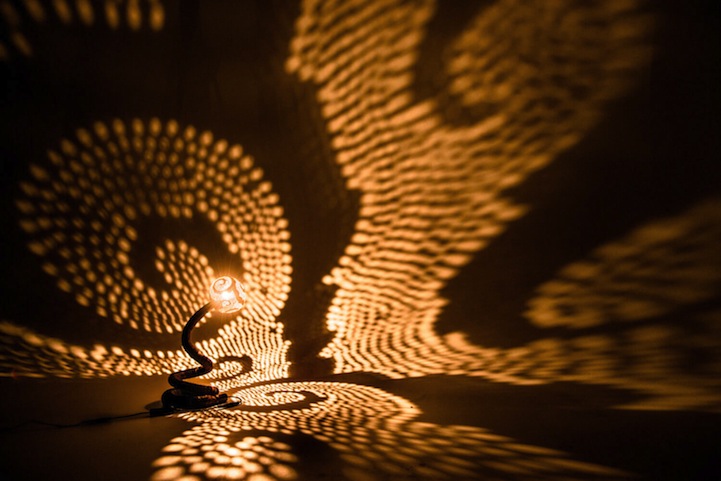 Could you tell us a little bit more about your process?

After finding the biggest and roundest coconut, I shave it, sand it, and wax it to make it smooth and shiny. I drill a 2cm hole at the bottom and with a small knife, carefully, bit by bit, extract the white meat from inside. Once that's done, I drill tiny, precise holes for many hours to create a pattern. It took many tries before I learned how to avoid making mistakes and ruining the coconut.

Creating the lamp base starts from knowing physics and doing electricians work–knowing what kind of light creates sharp shadows, taking the right components, welding them correctly and testing every lamp. After that, I create shape by adding flexible wires, soft parts, and painted wine corks to the body which are also covered in suede for the gorgeous finish. Cork is used to mount the coconut on the body, it holds it tightly and doesn't have any hooks that would ruin the clean design. Also, it's very easy to remove the coconut to change the light bulb. 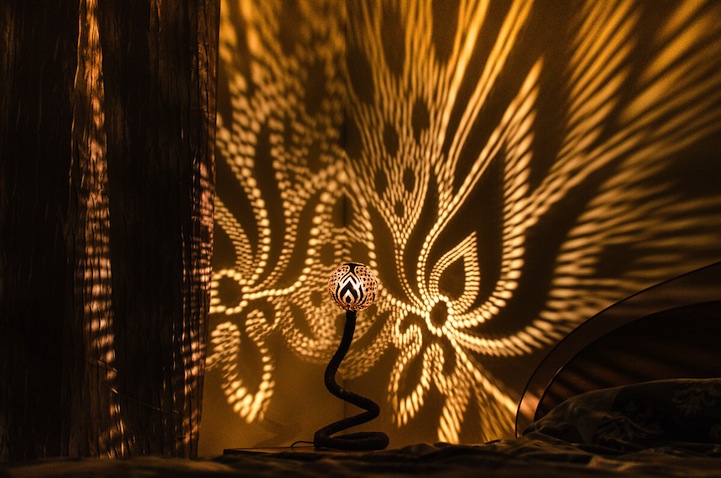 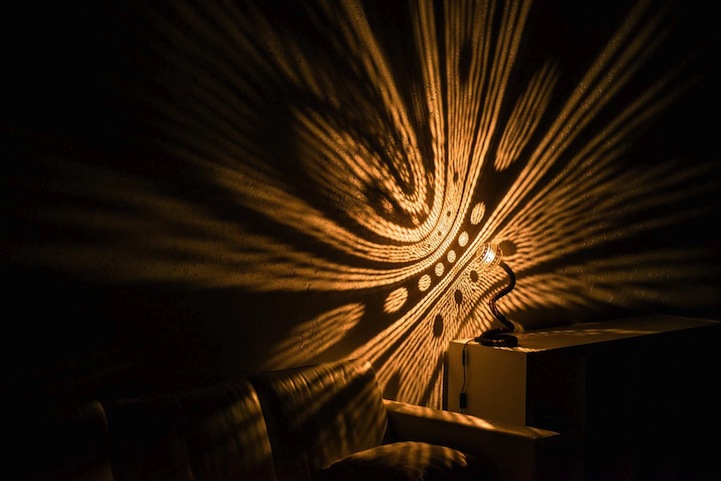 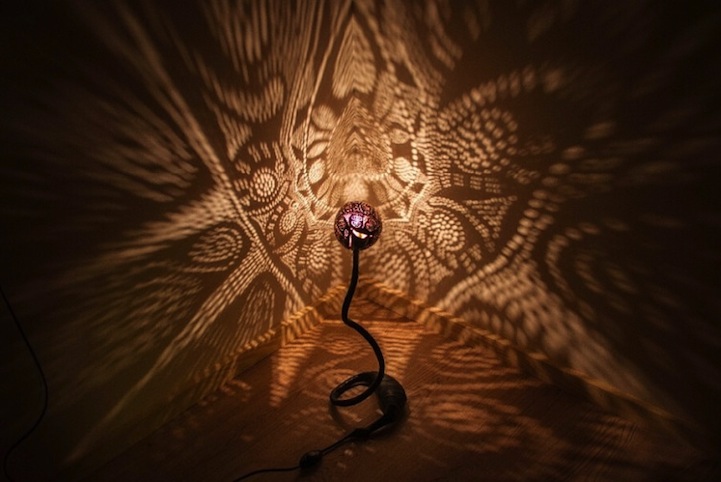 What inspired the creation of these lamps?

I stumbled upon some shadow art projects on the internet. Amazed by the concept of art not having boundaries like paper, I started desiring to own a piece of it. The problem is that either the light art was poorly made or it was amazing, but too expensive. So I decided to create it myself. From then, I became obsessed with it. 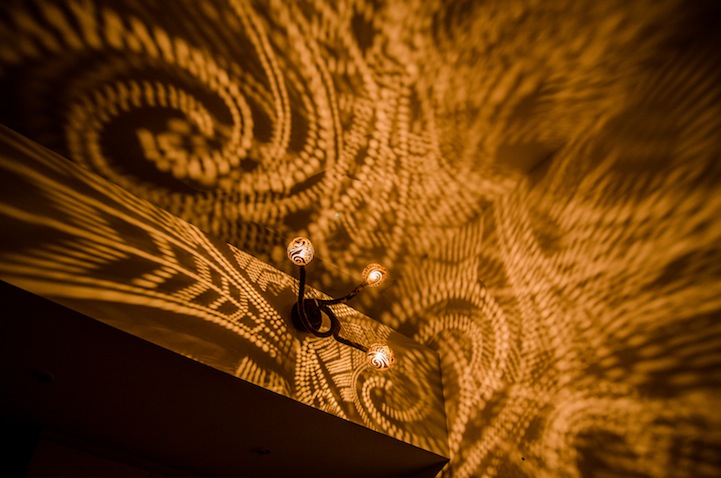 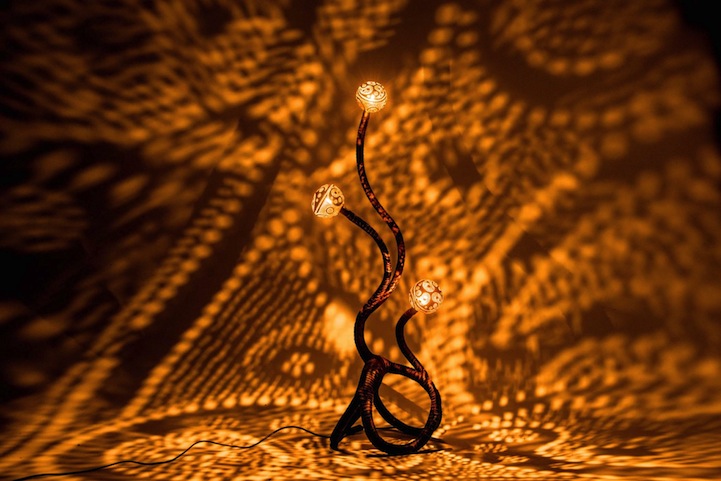 Is there artistic or spiritual significance to the patterns you drill into the coconut?

I'm a huge admirer of geometry, ornaments, and patterns. For me, the patterns don't have one meaning or one idea. They're full of concepts. For me, every pattern stands for something–some emotion, atmosphere or even a story–but I don't add them. That would make them lose the chance of having many different interpretations by different people. 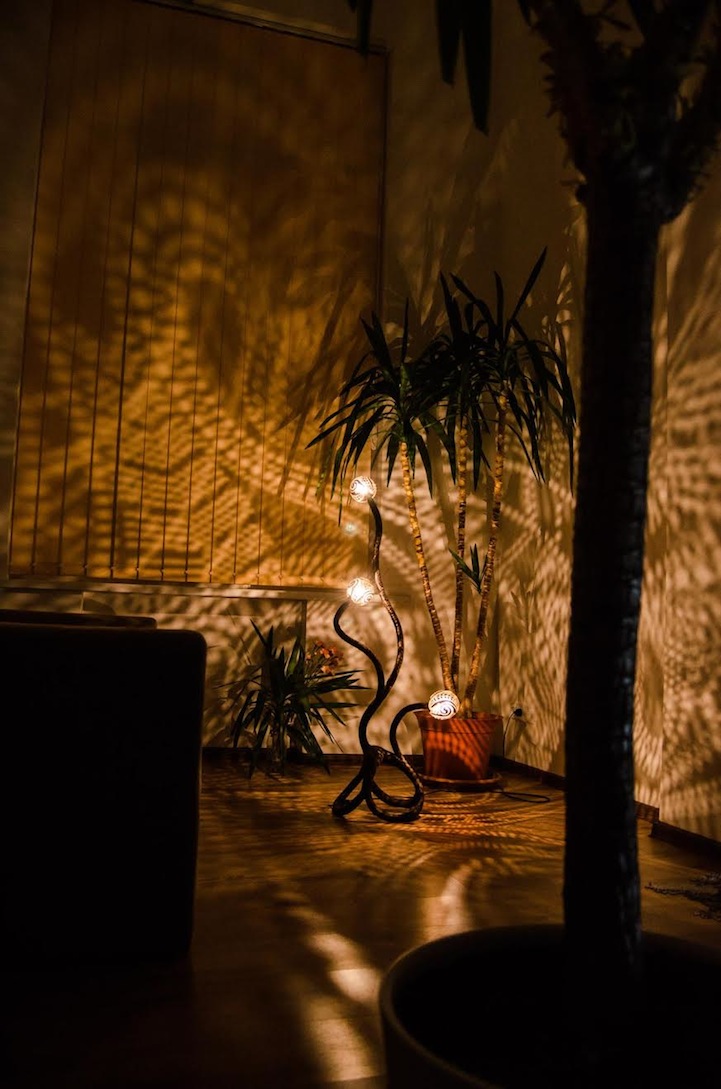 Look at how Kubilius's lamps turn an ordinary room into an extraordinary oasis. As he told us, “I create lamps that dominate the room.”

My Modern Met granted permission to use photos by Vainius Kubilius.