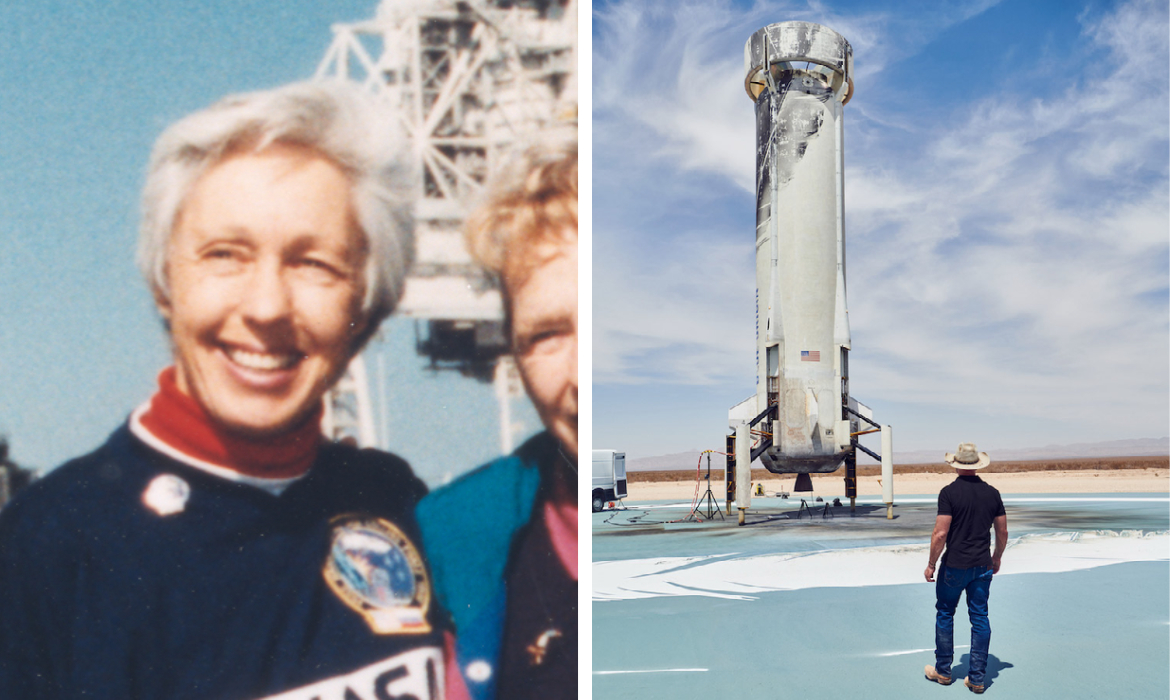 Photo: NASA (left); Blue Origin (right)
This post may contain affiliate links. If you make a purchase, My Modern Met may earn an affiliate commission. Please read our disclosure for more info.

At some point or another, every little kid dreams of becoming an astronaut. However, there are very few who go on to pursue that dream during their lifetime. Still, for some, the passion for space travel burns long and deep, following them throughout their formative years and fueling their adult ambitions. Such is the case for 82-year-old Wally Funk—an experienced aviator and long-time aspiring astronaut. And, after many years of dedicated effort, her lifelong dream is finally coming true.

Funk was recently selected by former Amazon CEO Jeff Bezos as an “honored guest” to accompany him, his brother, and one other auction-winning passenger on a trip into space. Blue Origin—an aerospace manufacturer and sub-orbital spaceflight company founded by Bezos—announced this news last week, confirming that Funk would be the fourth passenger on the spacecraft New Shepard’s first crewed flight on July 20.

The 82-year-old pilot could hardly contain her excitement when she received the news, as evidenced in a video capturing the special moment posted to Bezos’ Instagram. “I can’t tell people that are watching how fabulous I feel to have been picked by Blue Origin to go on this trip,” Funk exclaims with joy. “I’ll love every second of it. Whoooo! Ha-ha! I can hardly wait.”

Funk’s impatience to blast off is understandable since her first attempt to make it into space took place back in 1961 when she volunteered for the “Women in Space Program.” The privately funded project was run by William Randolph Lovelace II, a physician who had helped develop the physical testing for NASA’s official Mercury program, which was only open to male candidates at the time. Funk was the youngest woman to graduate from the program, passing all the rigorous physical and mental testing at the age of 21. She even managed to best famous astronaut John Glenn in one of the tests, spending 10 hours and 35 minutes in a sensory deprivation tank.

Though 13 women—including Funk—passed the same tests administered to the male Mercury astronaut candidates by NASA, the program was scrapped due to the fact that NASA would not accept female astronauts. These women—fondly known as the Mercury 13—were forced to put their dreams on hold, though they paved the way for other aspiring female astronauts who followed. When NASA finally started accepting female candidates in the late 1970s, Funk applied three times. However, in spite of her vast experience and impressive credentials, she was denied because she did not have an engineering degree.

Despite Funk’s years of dedicated effort, it was Sally Ride who would become the first American woman in space in 1983. However, Funk continued her career as a pilot—pursuing every type of aviation license available to her and eventually becoming the first woman to be a safety inspector at the Federal Aviation Administration. Still, her dreams of flying in space weren’t far from her mind.

“I got a hold of NASA four times,” Funk explains. “I said, ‘I want to become an astronaut,’ but nobody would take me. I didn’t think that I would ever get to go up. Nothing has ever gotten in my way. They said, ‘Wally, you’re a girl. You can’t do that.’ I said, ‘Guess what, it doesn’t matter what you are, you can still do it if you want to do it.’ And I like to do things that nobody has ever done.”

With Blue Origin’s upcoming New Shepard flight, Funk will be besting one of John Glenn’s records yet again. At the age of 77, Glen became the oldest person to ever travel in space. Now, at 82, that honor will belong to Wally Funk, and it has been a long time coming.

Jeff Bezos' company Blue Origin will be launching the spacecraft, New Shepard, on its first crewed flight on July 20. 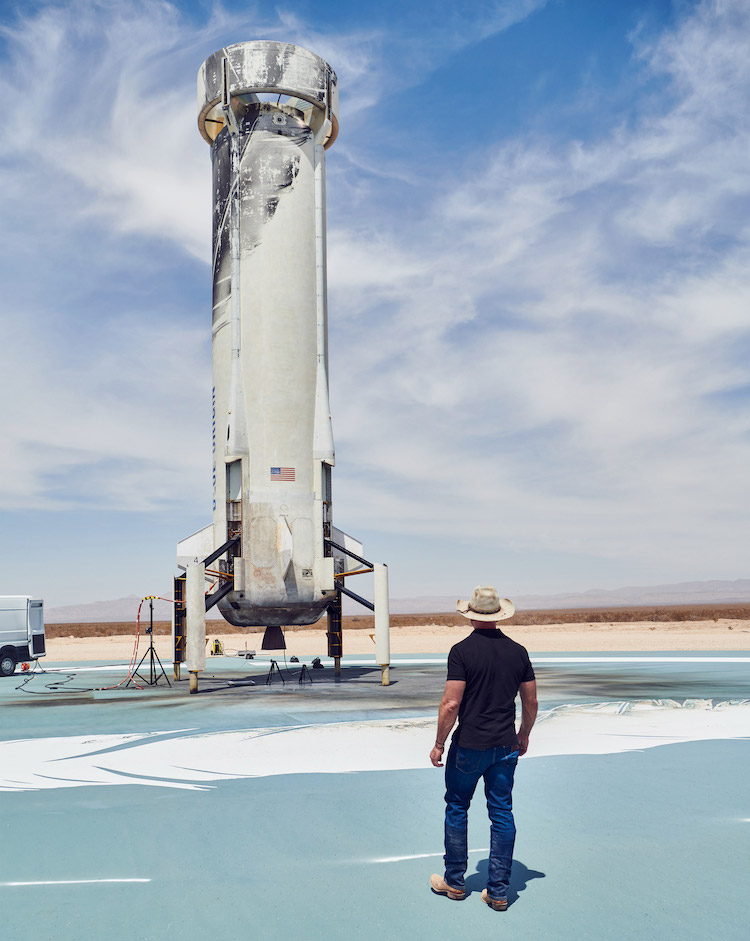 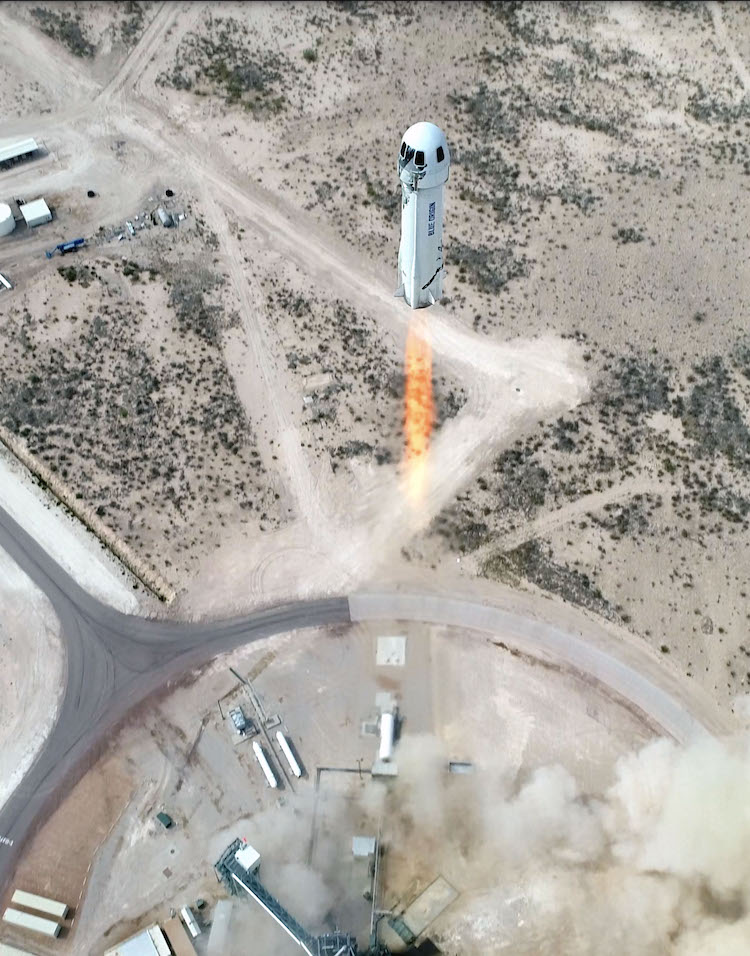 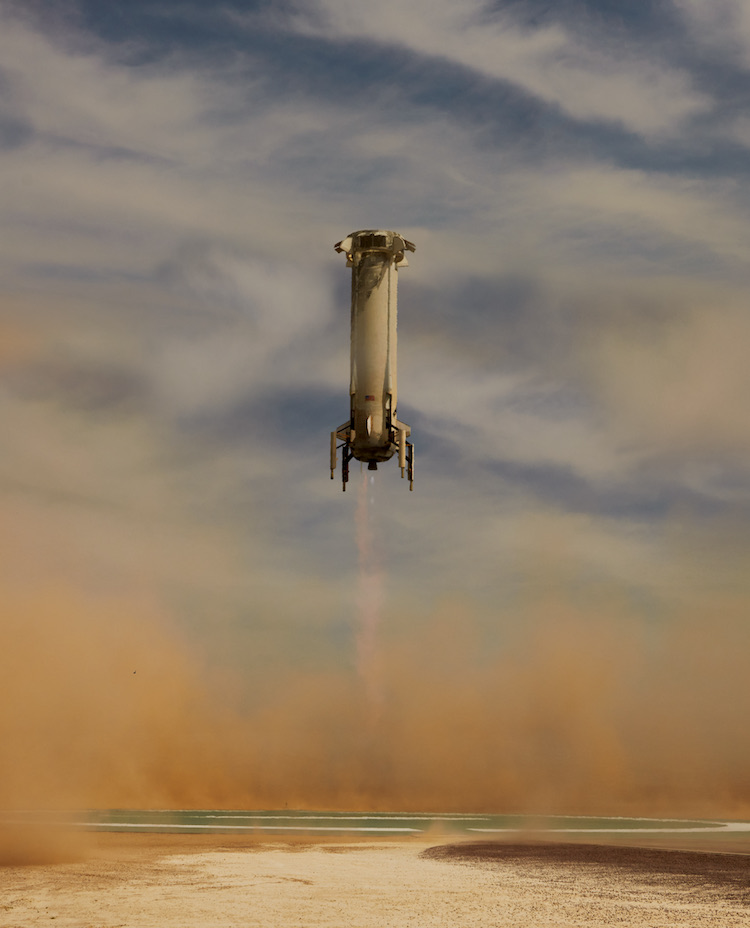 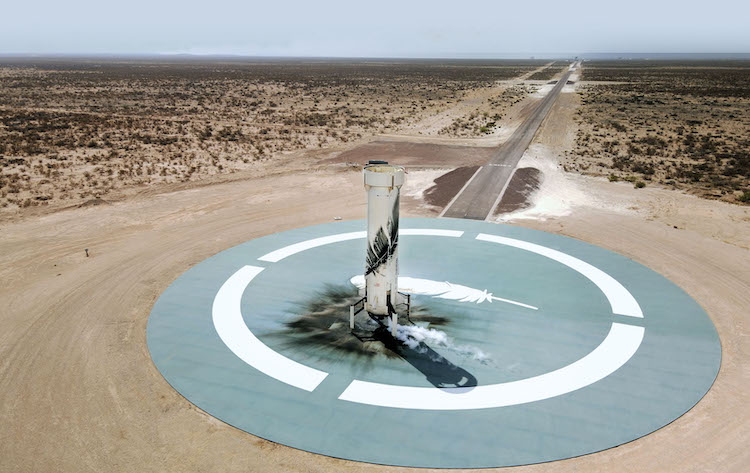 Bezos selected long-time aspiring astronaut Wally Funk to join the inaugural mission, and she could hardly contain her excitement! 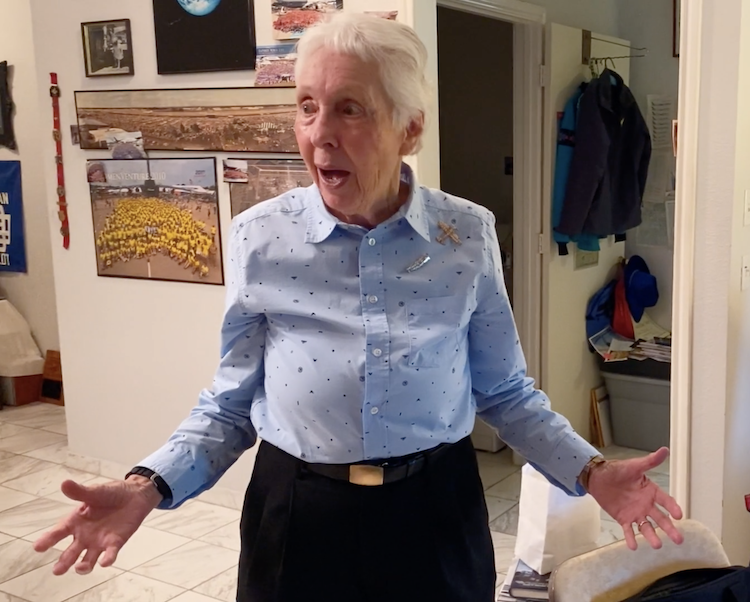 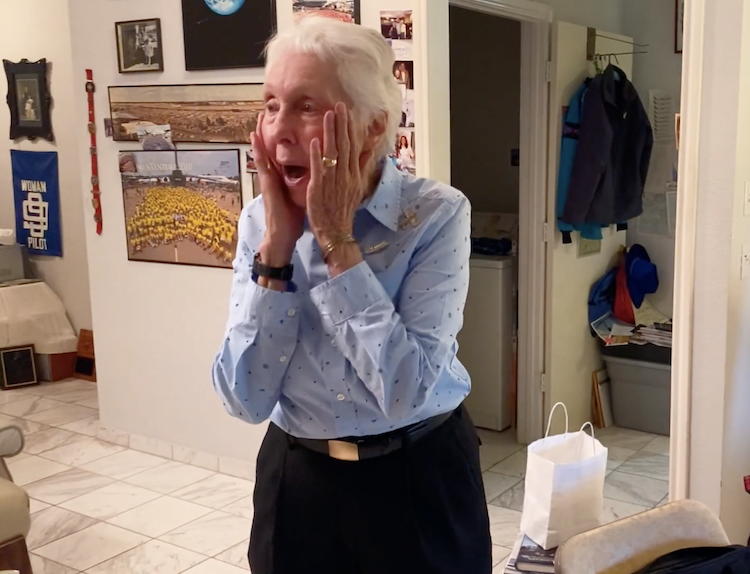 Funk is one of the Mercury 13, a group of 13 women who trained as astronauts for America's first human spaceflight in the 1960s. 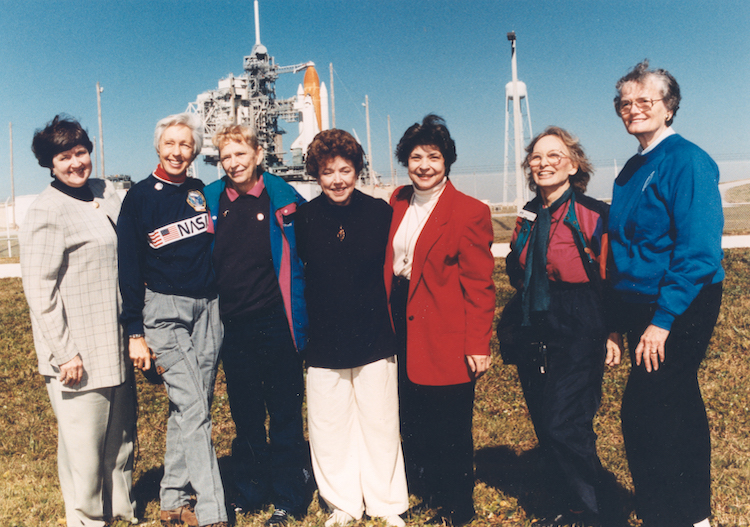 Members of the Mercury 13, Funk standing second from the left. (Photo: NASA)

She was denied the opportunity to go into space due to her gender, but she continued her journey and has even published two books about it. 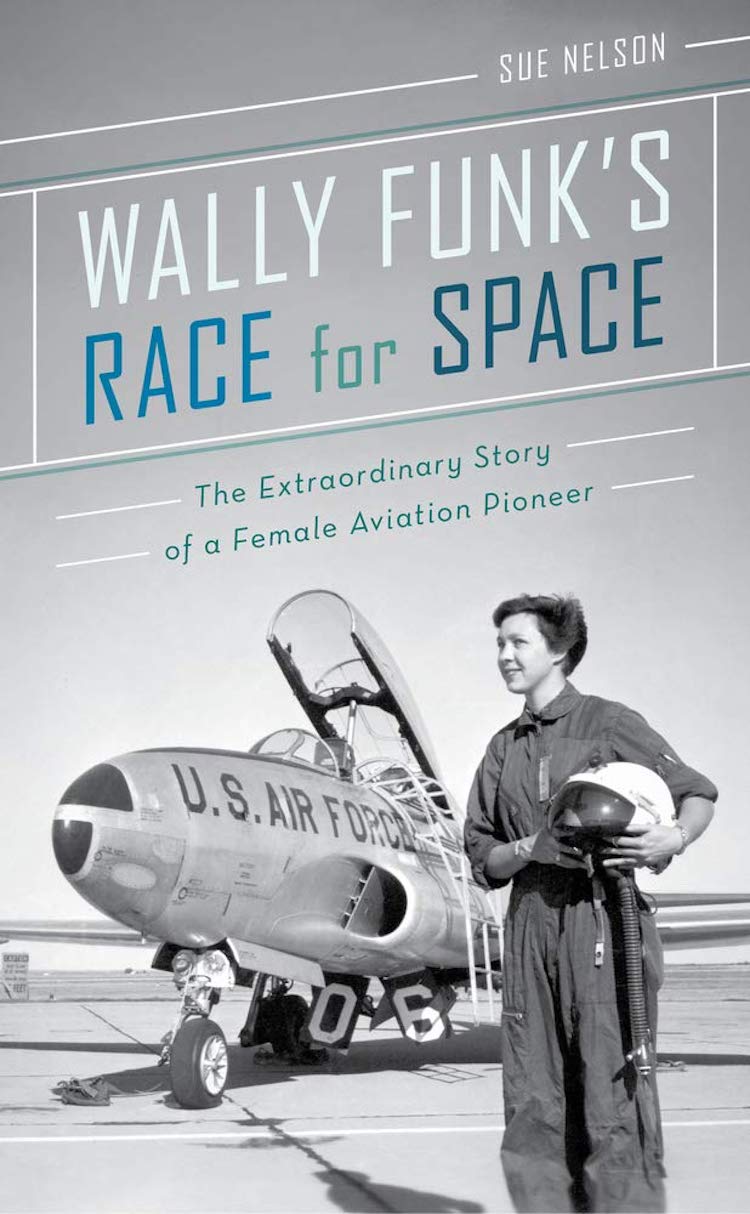 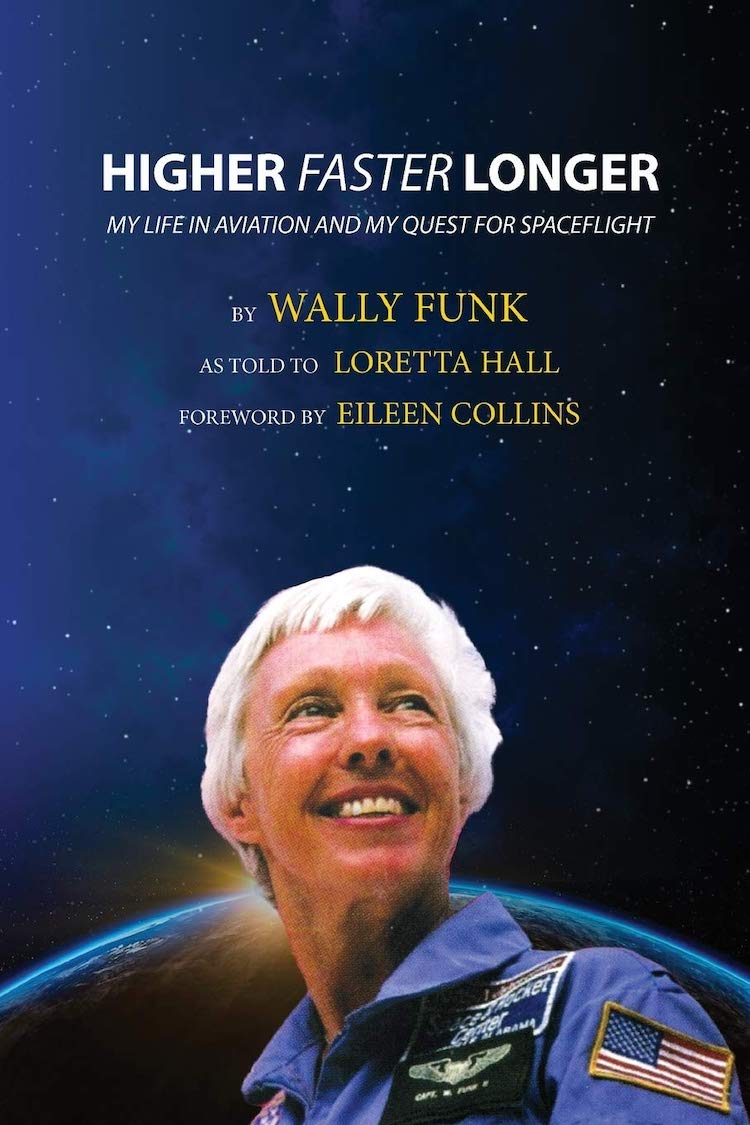 Now, at 82, she'll be the oldest person to travel in space. Watch Wally Funk's full reaction to Jeff Bezos' invitation!

All images via Blue Origin.