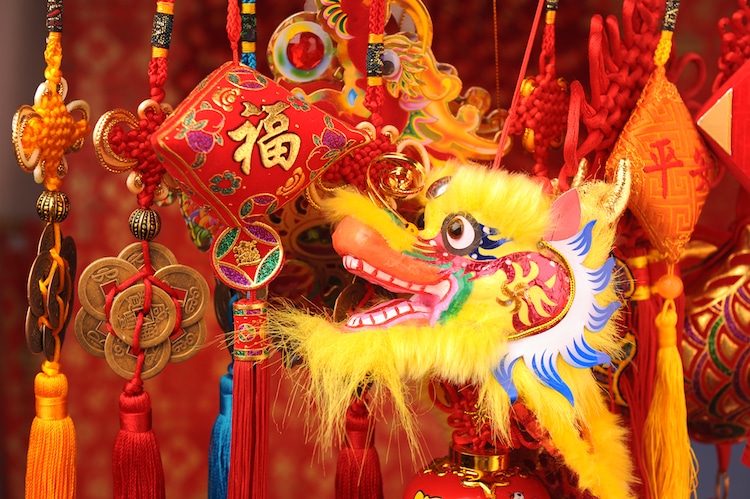 Happy Chinese New Year! Every February, this enchanting holiday is honored by millions of people across the globe, making it one of the world's most widespread celebrations.

While there's a chance you're familiar with the festival, you may not know the significance and symbolism behind some of its most important customs. If that's the case, you're in luck! Here, we take a closer look at the history and elements of China's Lunar New Year in order to understand what makes this fantastic festival so important.

What is Chinese New Year?

Chinese New Year is a holiday that marks the start of the new year according to the traditional Chinese calendar. The holiday begins on the second new moon after the winter solstice and concludes during the full moon that occurs 15 days later.

Because of its reliance on the lunar phases, the festival falls on different days each year. Similarly, a rotating cast of 12 zodiac animals are celebrated in accordance with the holiday, with one animal symbolizing a single year.

This year, the festival begins on February 12 and ends on February 27. And, according to the lunar calendar, it is now the Year of the Ox.

Chinese New Year is also known as chunjie or the Spring Festival in China. Although technically the holiday falls during the wintertime, it marks the ending of cold weather and the anticipation of spring and new beginnings. In fact, Spring Festival is recognized as a public holiday in China, and people receive seven days off to enjoy the celebration. This year, the holiday starts February 11 and ends February 17.

Origins of the Holiday

The exact date of the first festival is unknown. However, it likely started during the Shang Dynasty, China's second dynasty that lasted from approximately 1600 until 1046 BCE. During the Han Dynasty, a period that took place between 206 BCE and 220 CE, Emperor Wu established a mid-winter date for this celebration—a designation that remains to this day. 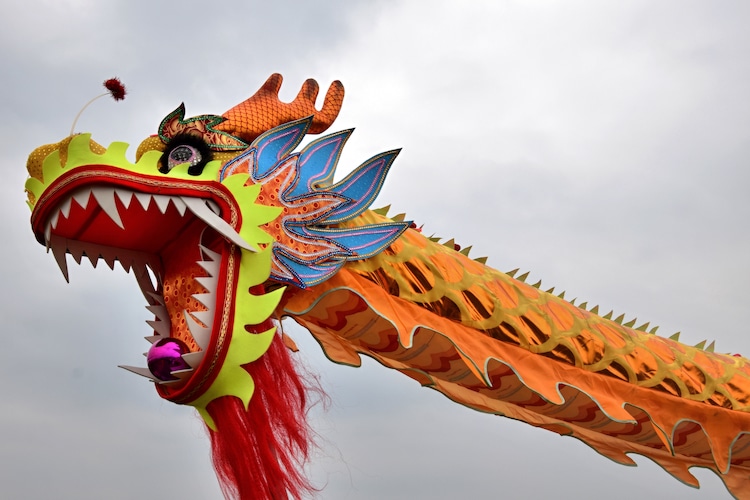 Much like its inaugural date, the mythological origins of Chinese New Year are not entirely clear. However, many people today attribute the bulk of the holiday's traditions to the tale of Nian, a lion-headed beast.

According to legend, Nian lived in the mountains most of the time. However, around the new year, he would make his annual descent into a nearby village to eat children and livestock. In order to ward the frightening creature away from their homes, villagers would make loud noises and surround themselves with the color red, a hue that Nian was known to dislike.

These tactics involved lighting off firecrackers, wearing crimson-colored clothing, and hanging red lanterns, scrolls, and other decorations around their homes every year. 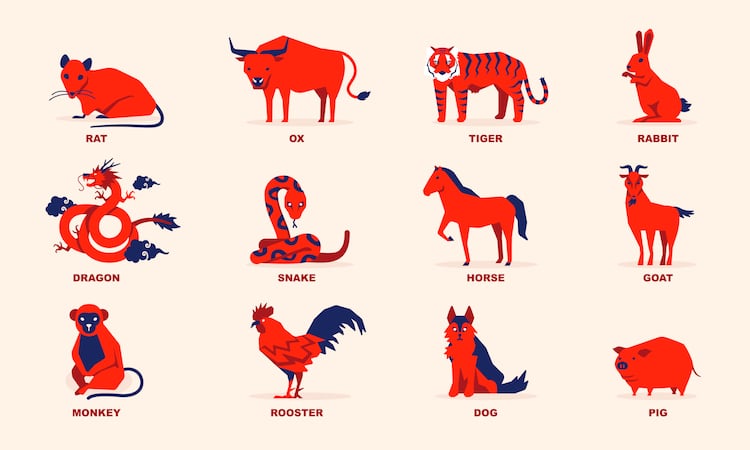 The Chinese Zodiac comprises a dozen animals that represent each of the zodiac cycle's 12 years.

While this number is an approximation of Jupiter's 11.85-year orbital period, the animals themselves are based on neither astronomy not astrology. Instead, they're rooted in mythology. Specifically, they are believed to have been selected following a “Great Race” that saw them cross the finish lines in this order: Rat, Ox, Tiger, Rabbit, Dragon, Snake, Goat, Horse, Monkey, Rooster, Dog, and Pig. The lunar calendar follows this succession, with the rat starting the cycle and the pig concluding it.

Each animal in the zodiac is connected to a season, direction, and natural element. Along with traits traditionally associated with each animal (oxen are strong, while tigers are brave, for example), these classifications are believed to influence our personalities.

If you aren't sure what your Chinese Zodiac sign is, you can find out using an online calculator. 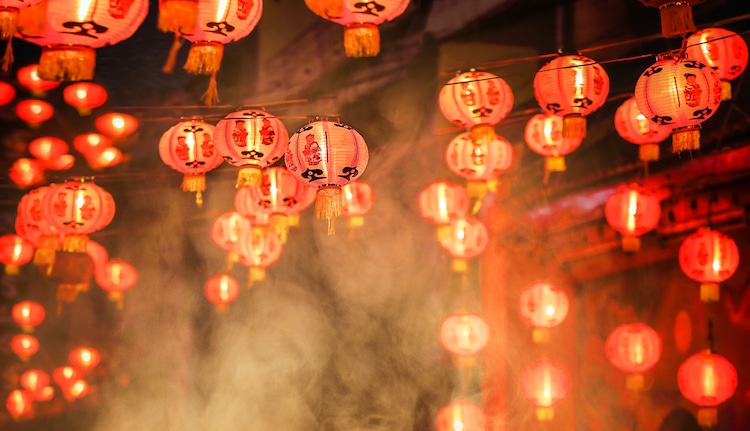 Countless traditions have come to define Chinese New Year. Here, we explore some of the most prevalent and popular of these customs.

On New Year's eve, the day before the festival kicks off, families prepare and partake in an important meal called the reunion dinner. For this special get-together, family members come from far and wide to welcome the new year and wish each other luck for the 12 months to come.

A traditional reunion dinner includes 8 courses topped off with white rice, tea, and fruit for dessert. According to Chinese American Family: “The procession of dishes should include a cold appetizer, soup, three main meat courses, a vegetable dish, noodles and fried rice.” 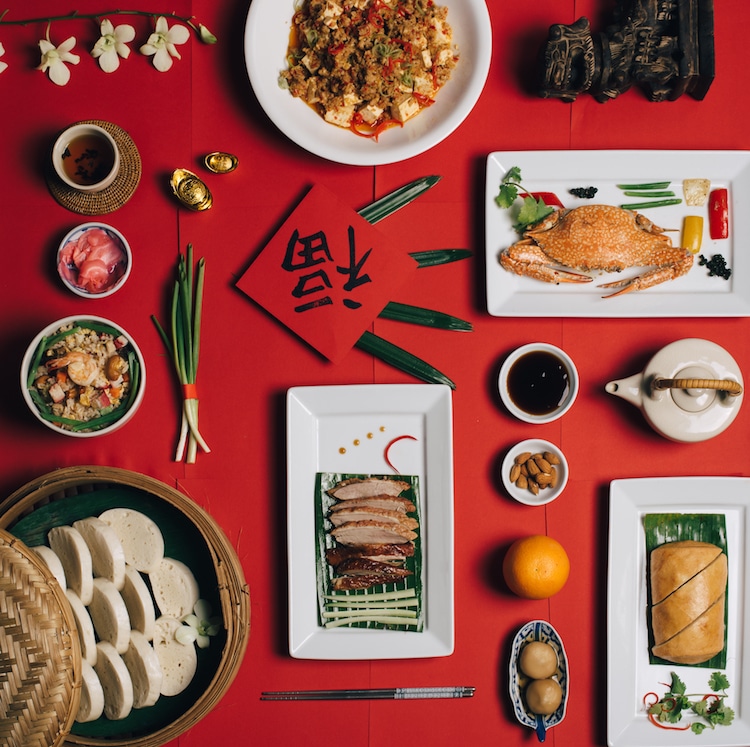 While specific dishes range from family to family, many foods are selected with both taste and terminology in mind. “For example,” Chinese American Family explains, “the word for fish yu, sounds like the word for ‘extra' or ‘surplus,' making it an indispensable part of the Chinese New Year meal.” Other food homonyms include tangyuan, a rice ball whose name sounds like the term for “getting together,” and tangerines, whose title is reminiscent of the word “luck.” 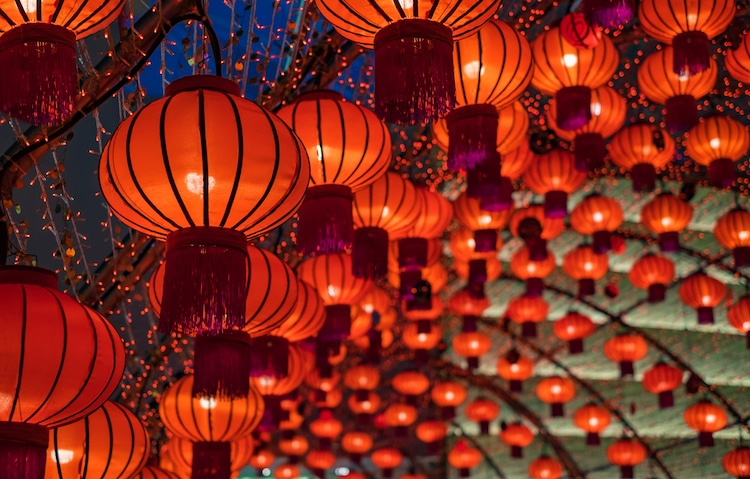 This use of homonyms is also prevalent in decoration. For example, many people hang a red, diamond-shaped banner with the fú (“fortune”) character written on it in an upside-down manner. It is oriented in this unusual way because “upside-down” is a homonym of  “to arrive.” Therefore, arranging the banner in this way implies that fortune or good luck will arrive.

Similarly, in the spirit of Nian myth, people decorate their home with red decorations, including paper lanterns, cut-outs, and door couplets, or banners adorned with poetry. Due in part to this legend, red has come to symbolize “good luck,” furthering its role as the festival's most important color. 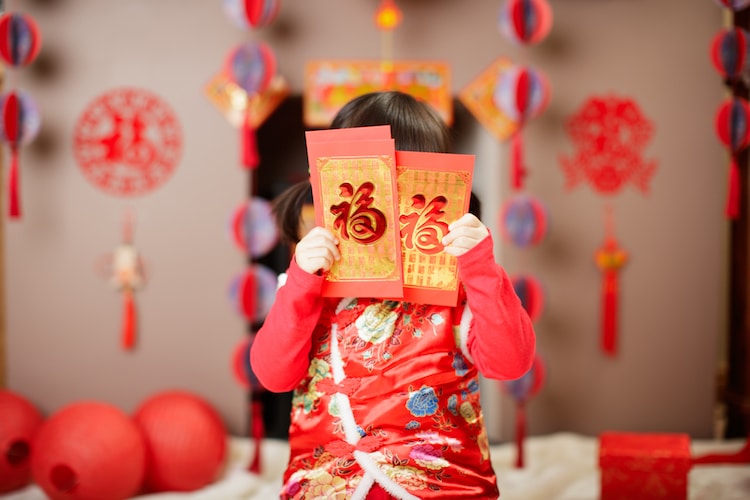 People also exchange red envelopes (also often called “red pockets”) during the festival. Filled with “lucky money,” the packets are most often given to children from parents and grandparents. The money inside the envelope symbolizes a blessing for the coming year, and originally would have been given in the form of coins tied with a red string. 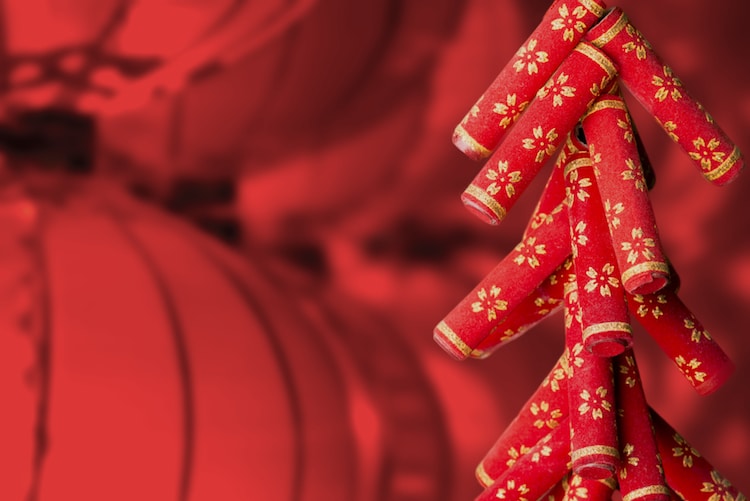 While their precise timing during the festival varies from region to region, many people set off firecrackers before the reunion dinner as a way to alert their ancestors that the festivities are starting. It is also customary to light them at the stroke of midnight on New Year's Day, during the Lantern Festival on the 15th day, and during parades. 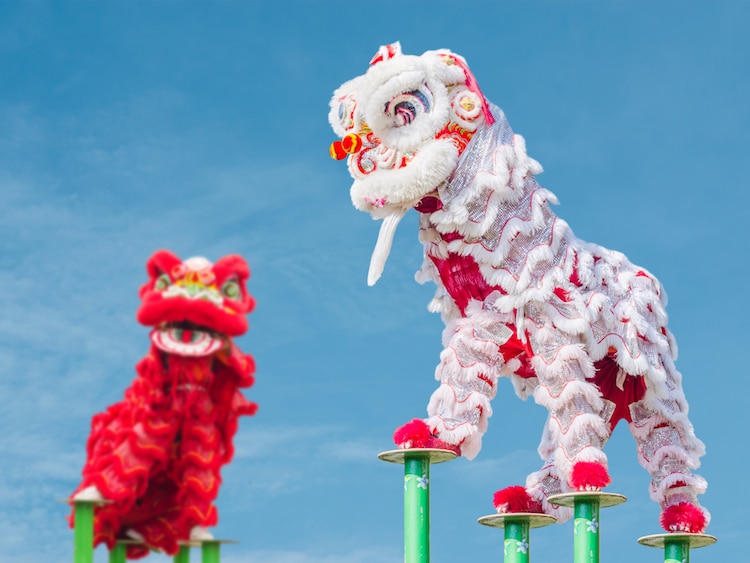 Lion dancers are inspired by Nian, who is believed to have had the head of a lion. To perform a lion dance, two dancers hide beneath a lion-like costume, which traditionally comprises a papier–mâché head, bamboo frame, and fur-lined fabric. They move in a quick, cat-like way and often perform stunts. 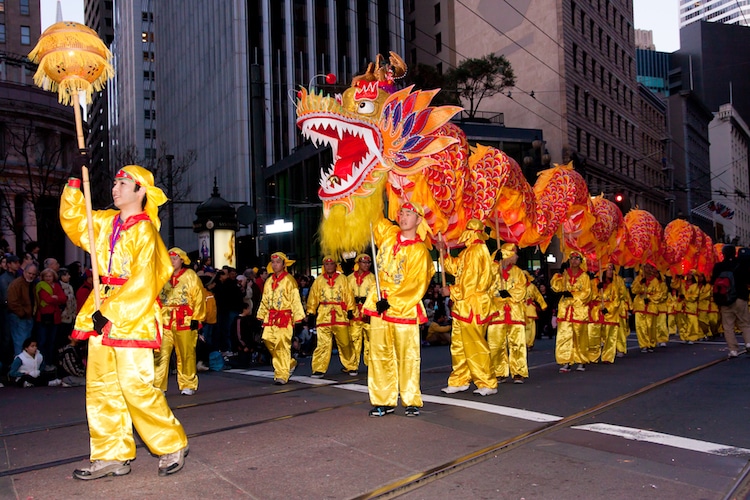 A dragon dance requires a team of dancers who hold up a serpentine-like dragon structure. The body comprises several sections held up by poles, and is joined to a tail and decorative head. Often, the dragon follows a person holding an orb on a stick, meant to represent a “pearl of wisdom.” 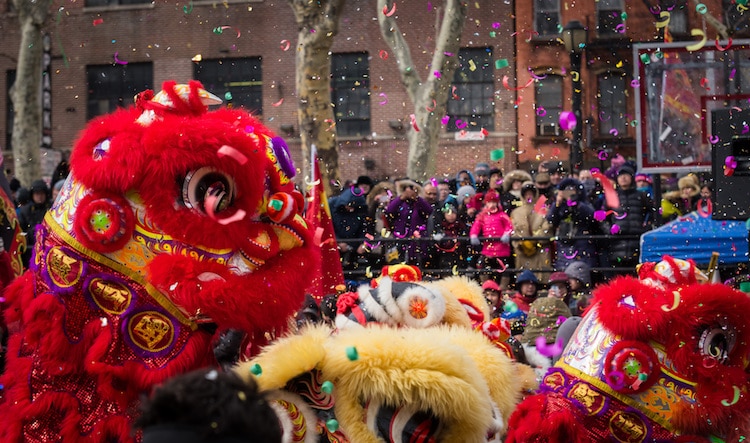 Today, Chinese New Year is observed by families all over the world and in countries with large Chinese populations. Many major cities host annual parades and other events that incorporate traditional customs and keep the holiday's spirit alive.