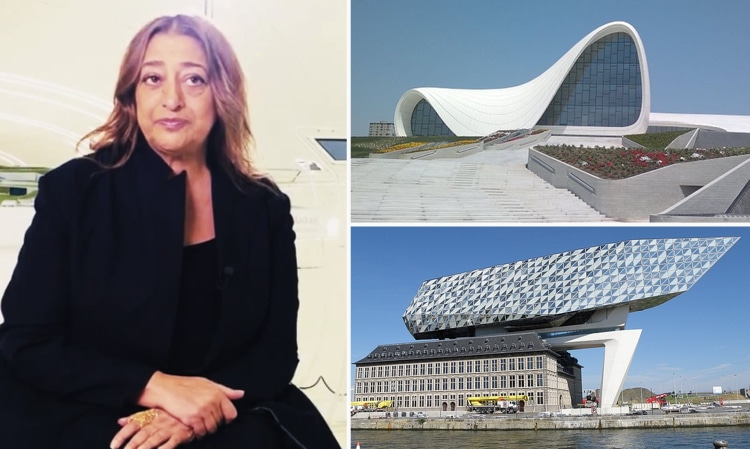 Born in Baghdad and trained in London, legendary architect Zaha Hadid made an indelible mark on 21st-century architecture. Following the Postmodern architectural boom led by Frank Gehry, Hadid was one of a group of innovative architects who helped usher in a new age of architecture with a cross-pollination of technological and artistic influences.

Already recognized as a talent while studying at the Architectural Association School of Architecture—former professor Rem Koolhaas described her as “a planet in her own orbit”—her more than 30-year career helped shape the way society thinks about contemporary architecture. As a rare female in a male-dominated industry, and the first woman to win the prestigious Pritzker Architecture Prize, Hadid served as a beacon for creatives from different backgrounds, proving that you didn't need to be a white male to make a statement in architecture.

Her untimely passing in 2016 left unfinished projects, many of which are now being brought to completion by Zaha Hadid Architects, the firm she began in 1980, just a few years after finishing her studies. Carrying on her work, we are able to see the physical realization of Hadid's creative mind.

Not just limited to architecture, her work in interior design, fashion, industrial design (including yachts), and fine art reminds us of what a well-rounded artist she truly was. The scope and breadth of this creativity has left a lasting legacy that continues to influence creatives in all fields, even today. 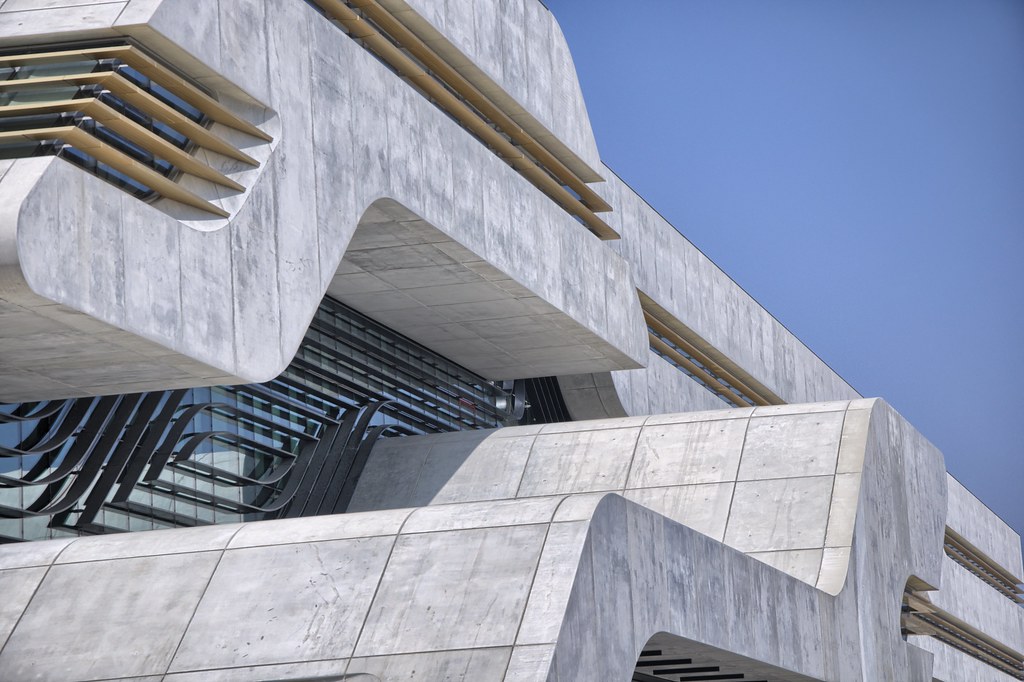 Known as the “queen of curves,” Zaha Hadid's architecture isn't easily grouped with one particular architectural style. It was a purposeful choice, as Hadid preferred not to limit her practice to a specific movement. She is well-known for her use of geometric shapes to create dynamic, fluid structures. Certainly, much of her influence stems from her love of abstract painting and drawing. It's well-documented that she was particularly fond of avant-garde Russian painters such as Kazimir Malevich and even re-interpreted Vladimir Tatlin’s Monument to the Third International for an exhibition at the Guggenheim. 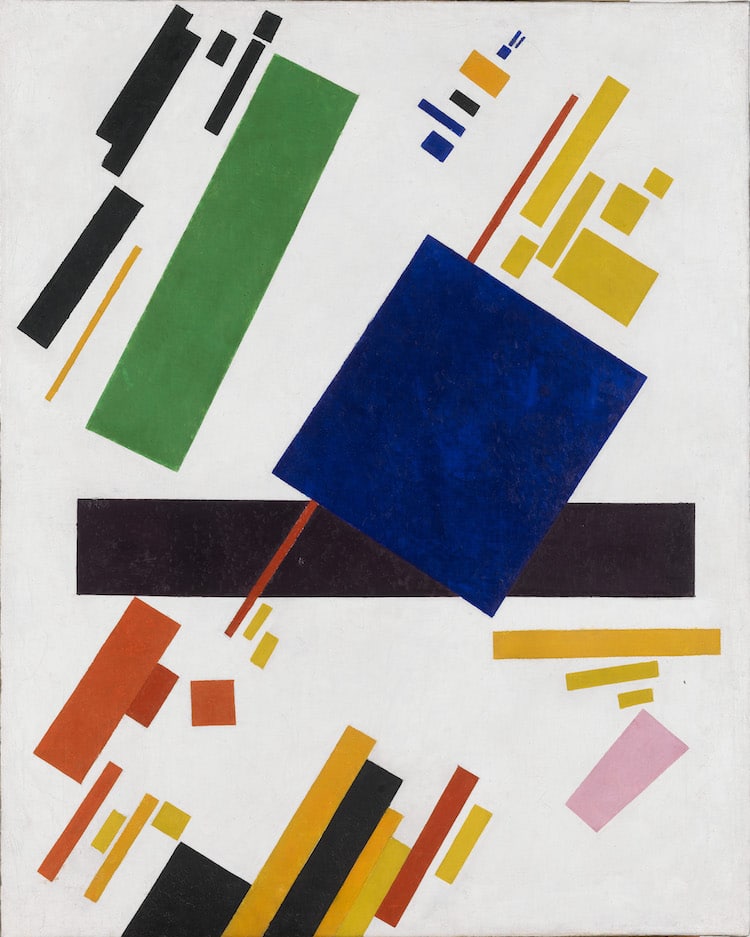 How do these abstract forms seep into her design process? “The whole idea of lightness, floating, structure and how it lands gently on the ground: It all comes from [the Russians],” she shared with the curator of her painting exhibition at the Serpentine Galleries. Still viewable online, taking in Zaha Hadid's paintings is a key window into understanding her architecture.

Working particularly with concrete and glass, Hadid took these industrial materials and bent them into forms that subtly recall natural shapes. By deconstructing these forms, she was able to present cutting-edge work that also evokes human emotion. 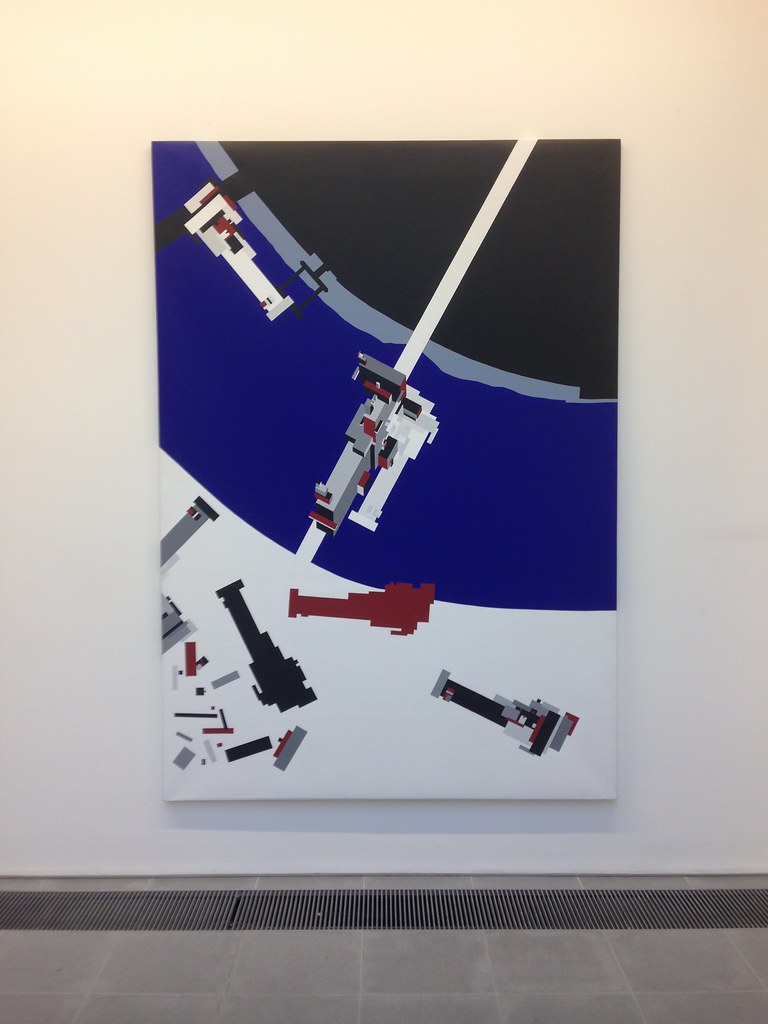 From 1994, when she completed the Vitra Fire Station, Zaha Hadid's architectural output included museums, sports and cultural centers, commercial and residential buildings, as well as bridges and train stations. A look at some of her most iconic buildings. 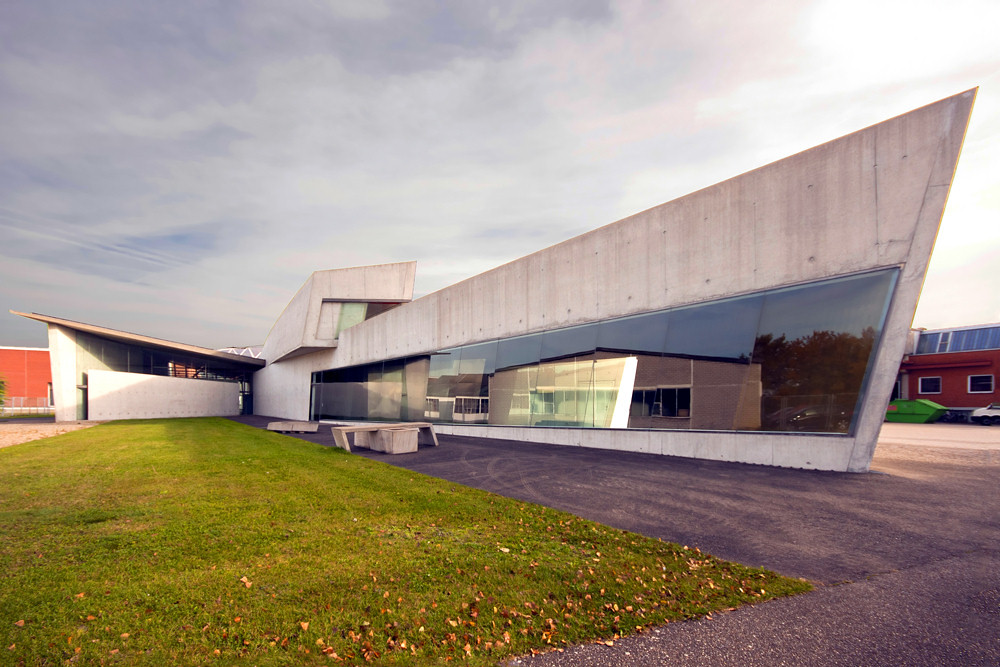 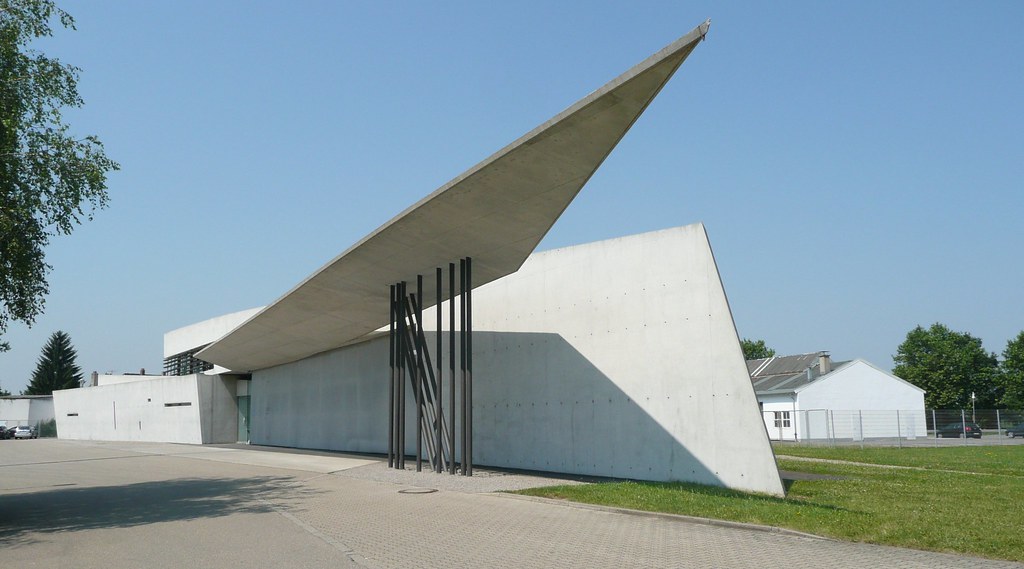 Built in a small German town on the borders of Switzerland and France, the Vitra Fire Station was Hadid's first opportunity to bring her abstract drawings and paintings to life in a physical form. The sharp, angular concrete planes of the building are a glimpse into the future of Zaha Hadid's architecture, with the project garnering her international acclaim. 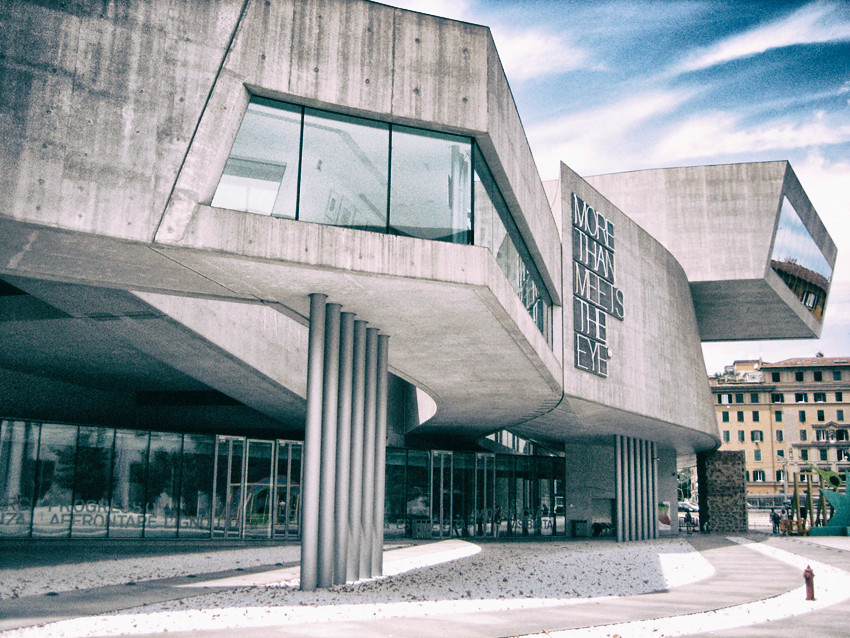 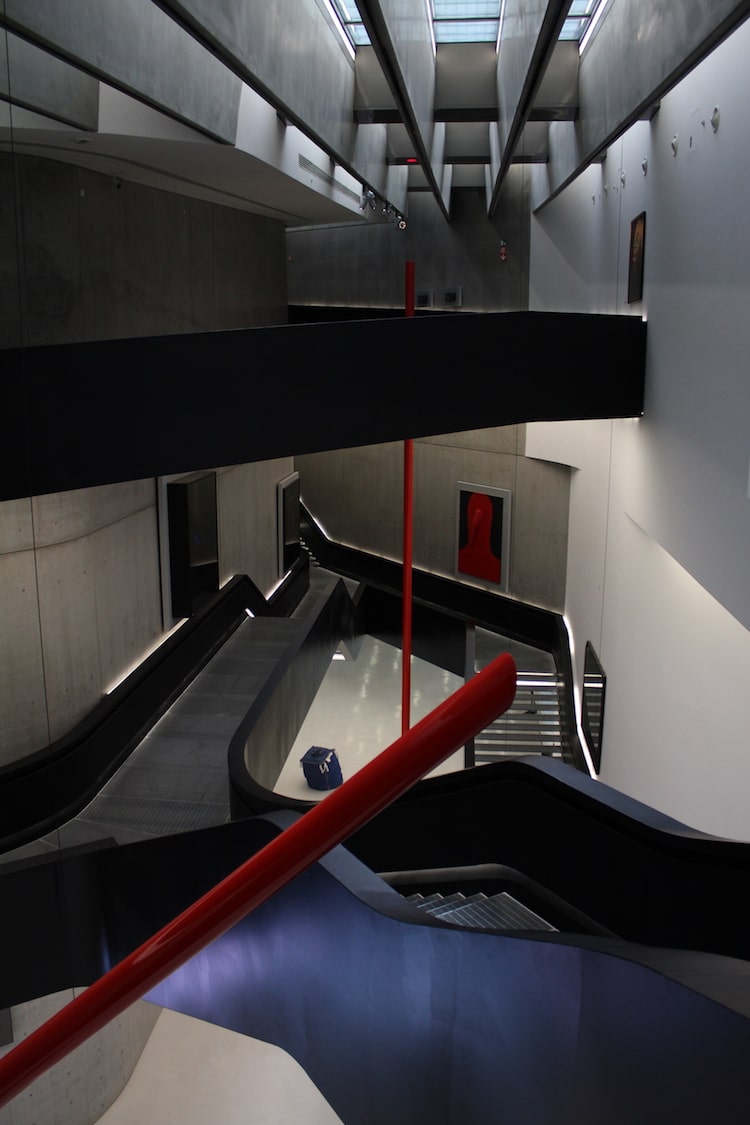 Italy's national art museum of contemporary art was a decade in the making, with the multi-faceted space moving forward slowly but surely despite government changing six times over the course of construction. The result is one of Hadid's finest works, the building itself a monument fitting of standing alongside Rome's colossal monuments. One of her most praised works, it won the 2010 Stirling Prize for Architecture, which goes to the best new European building built or designed in the UK. 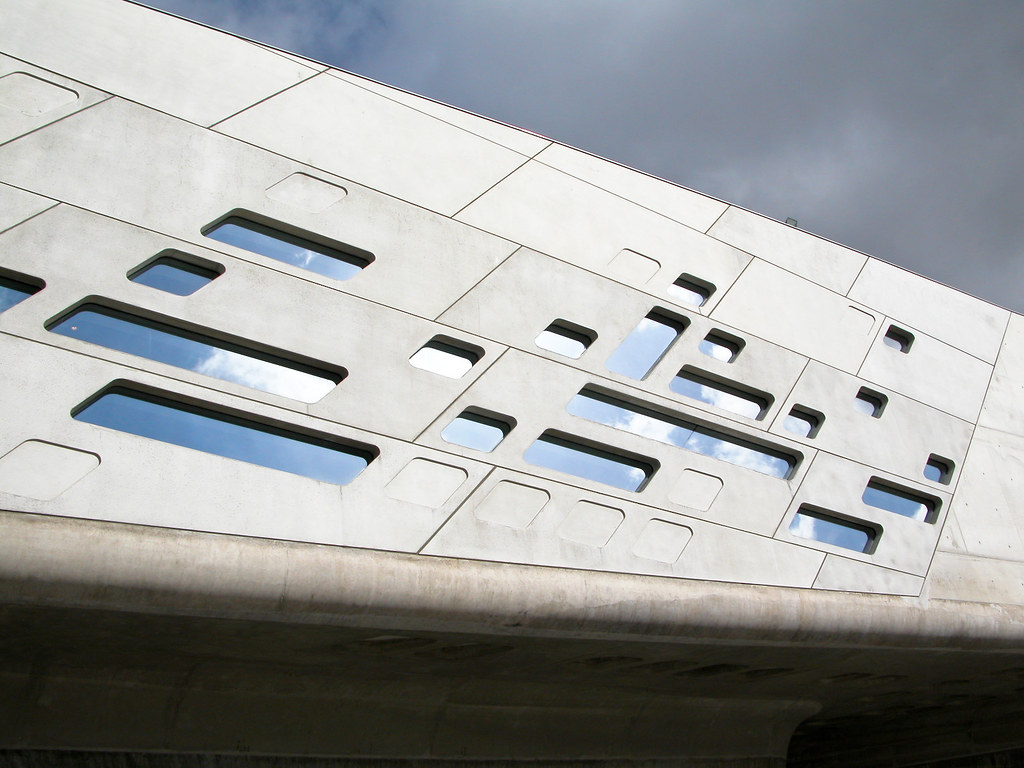 As the biggest investment the city had ever made, Wolfsburg's new science center had a lot of riding on it. Hadid delivered with a stunning building that marries contemporary materials and forms into a timelessly classic building. The glass cutouts and ceiling latticework are recurring themes throughout Zaha Hadid's buildings, with the concrete pillars creating “undulating artificial hills and valleys.” 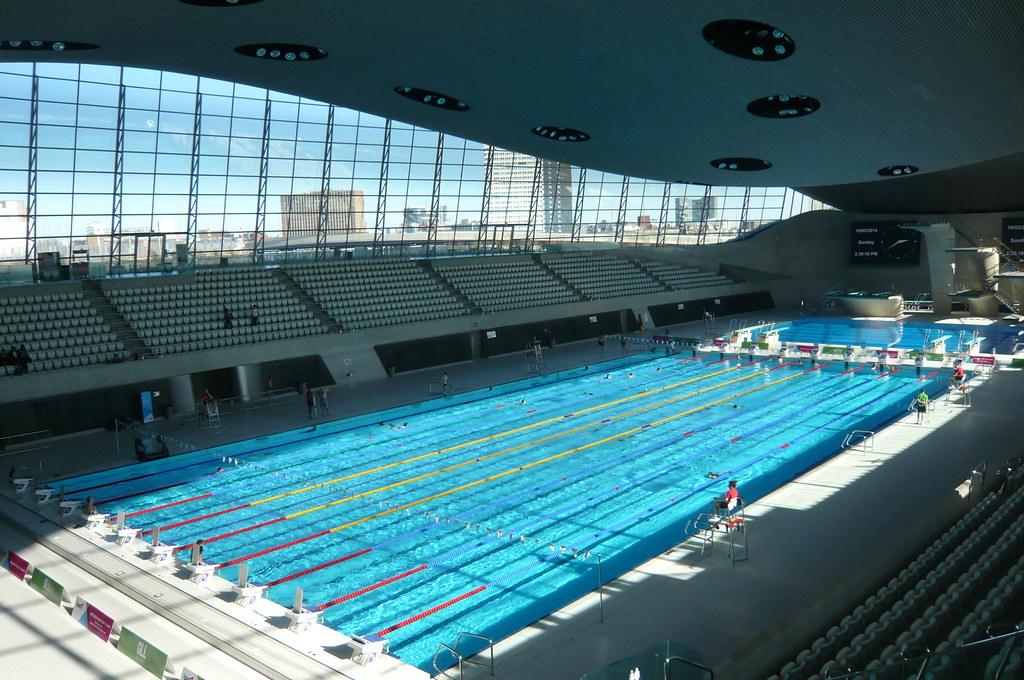 For the 2012 Summer Olympics, Hadid was charged with creating one of the major centers for the event. The resulting Aquatics Centre is a masterpiece with an undulating roof that rises up like a wave—a nod to Hadid's inspiration. She looked to the forms of water in motion, making the natural shape with exposed concrete finishes. Though subsequently modified to transform the center into a space for public use, it remains one of the highlights of Olympic Park. 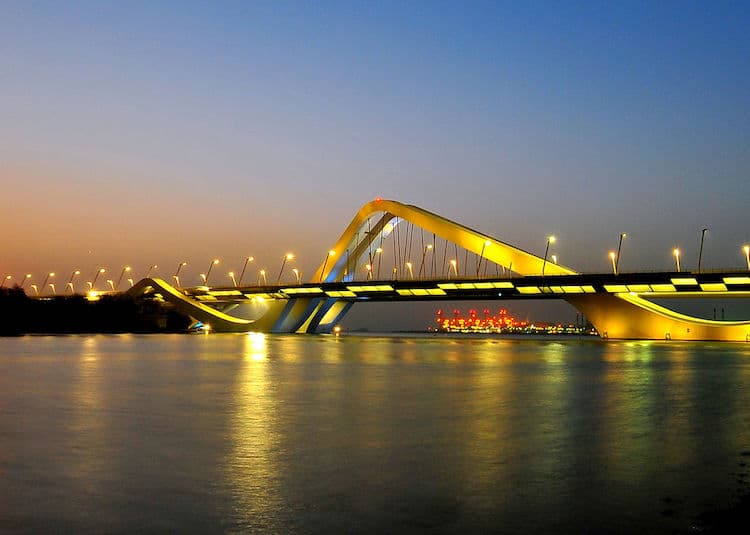 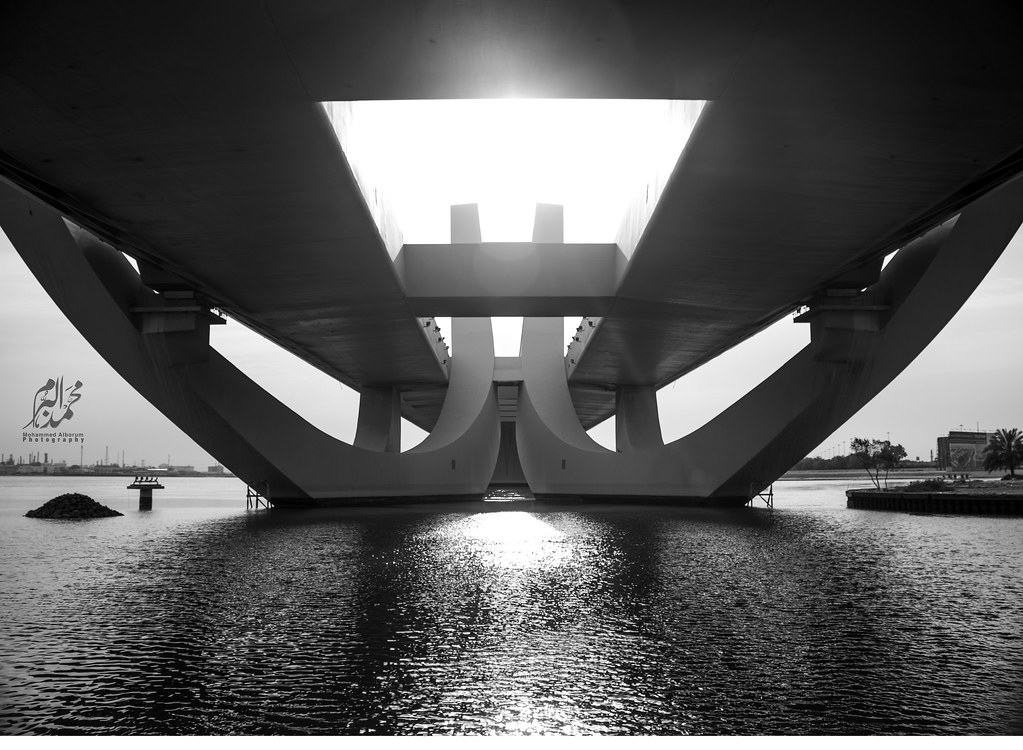 The two-way four-lane highway bridge is a stunning look at how Hadid's curving forms translate to functional architecture. The undulating bridge, which connects Abu Dhabi island to the southern Gulf shore, was inspired by the forms of sand dunes, once again showing how Hadid's architecture takes inspiration from nature. Stretching a half-mile (842 meters), it's said to be one of the most complex bridges ever constructed.