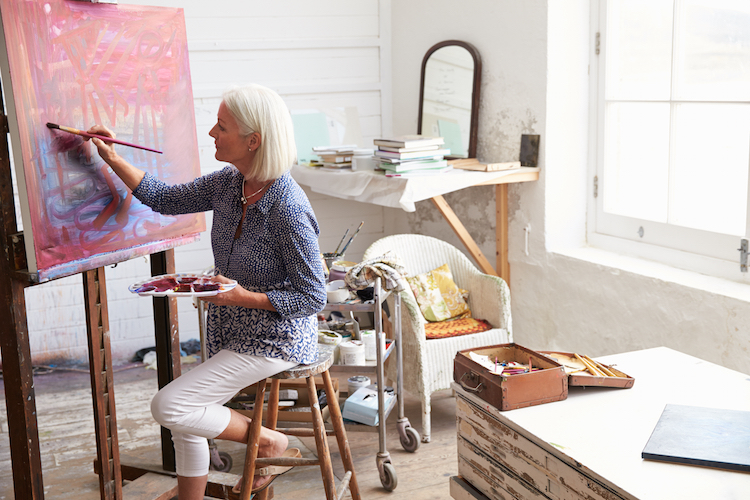 For the last 22 years, an unknown contributor has been donating $25,000 grants to hundreds of female artists as part of a program called Anonymous Was a Woman. The project was developed to give artists over the age of 40 financial aid in order help them realize their creative careers. A total of 220 deserving artists have benefited so far, with grants totaling a staggering $5.5 million. Motivated to set an example for other women to have a voice, photographer Susan Unterberg has recently revealed herself as the mysterious donor.

The name Anonymous Was a Woman comes from a line in Virginia Woolf’s novel A Room of One’s Own and refers to historical female artists who had to keep their identities secret in order to work and be respected. And although women’s rights have come a long way, there’s still some gender equality issues in the art world. For example, female artists make up just 3-5% of major permanent museum collections in the U.S. & Europe. Explaining her decision to come forward, Unterberg says, “It’s a great time for women to speak up. I feel I can be a better advocate having my own voice.” She adds, “Women have been anonymous for far too long.”

The now 77-year-old photographer’s generosity was inspired by her own struggles to become a successful contemporary artist. After hearing of the National Endowment for the Arts grant cuts, Unterberg decided to use funds she had inherited from her father’s oil business.

One artist to receive a grant was Amy Sherald, who painted former First Lady Michelle Obama’s official portrait. She reveals, “I had $1,500 left and that’s exactly what my rent was. The announcement of the portrait had just come out and I was sitting there flat broke. It saved my life in terms of securing my studio to make that portrait.” Carrie Mae Weems was another artist to benefit from Unterberg’s generosity. She recalls, “I was offered this extraordinary gift…It was important, because I needed the money, but more than anything, I needed the encouragement and the support to keep making, to keep pushing—to continue to work in spite of all of the pressures.”

Photographer Susan Unterberg has recently revealed herself as the mysterious donator behind the Anonymous Was a Woman program.

What an interesting article about what a woman did with the money she got from her rich parents:

She became an artist, then quietly gave out $5.5 million in $25,000 chunks to other women artists at crucial moments in their careers. https://t.co/TXB3EsDMie

She’s been giving $25,000 grants to hundreds of deserving female artists over 22 years.

Artist Susan Unterberg reveals that she is the donor behind Anonymous Was A Woman grants; she’s given over $5.5m to female mid-career artists https://t.co/jEIycLWCyU #anonymouswasawoman pic.twitter.com/LJLu8VQZoO

Inspired by this artist's generosity?