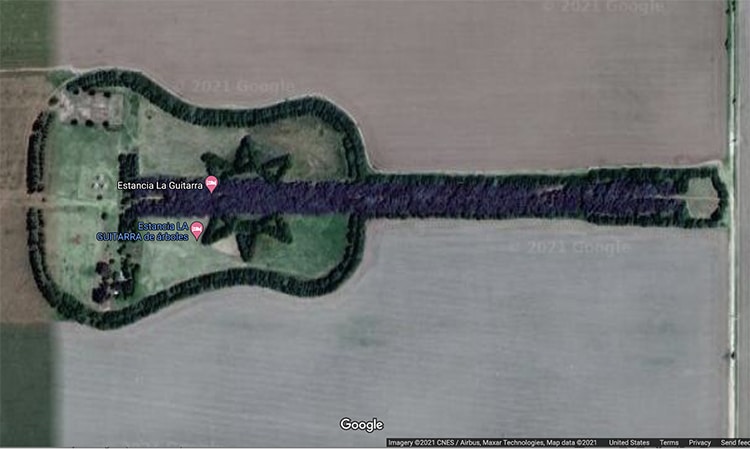 View of the guitar forest and garden on the Argentinian Pampas. (Photo: screenshot from Google Earth)

Flying over the rich patchwork of the Argentinian Pampas, one might be surprised to glance down and see a giant green guitar etched into the fields. Rather like the hill figures of ancient days or the hedge mazes of the Renaissance, this enormous landscape feature has the best vantage point from above. The guitar forest and garden is a modern project—it was planted over several decades by a local farmer named Pedro Martin Ureta in memory of his beloved wife Graciela Yraizoz. This labor of love is a source of local joy and is even famous enough to be noticed by NASA's satellites.

Back in the 1970s, young wife and mother Graciela flew in a plane over the agriculturally rich Pampas landscape of Argentina. She noticed that by natural chance a farm below formed the shape of a milk pail. Later, she asked her rancher husband Ureta if they could shape their fields into the form of a guitar in honor of her love for the instrument. According to Condé Naste Traveller, Ureta told her, “Later, we’ll talk…about it later.” Sadly, that day would never come. Graciela passed away suddenly in 1977 at age 25, after collapsing with a brain aneurysm while heavily pregnant.

Heartbroken, Ureta and his four children began to create the forest and garden in the shape of a guitar in 1979 to honor the memory of his late wife. He drew the lines by spacing out his children over the fields as guides. With the help of field hands, the family planted over 7,000 trees. The outline of the instrument are made of cypress trees, as is the star-shaped hole beneath the strings. The strings themselves are “drawn” in eucalyptus trees. Over the decades, the family cultivated the growing forest—including using creative scrap metal solutions to prevent pests. The entire guitar stretches two-thirds of a mile long.

Today, the guitar forest has gained both local and international acclaim as a symbol of a great love. It is visible on Google Earth, where you will find comments from people around the world who are touched by the story of Ureta and Graciela. Even NASA has documented their love with the Advanced Spaceborne Thermal Emission and Reflection Radiometer (ASTER) on the Terra satellite. Unfortunately, Ureta has never personally seen the guitar from above, as he is afraid of flying. Many decades later, Ureta found love again, but his elaborate memorial for his late wife has remained one of the most touching tributes to love cut short.

An Argentinian farmer has created a guitar-shaped forest and garden as a memorial for his late wife, Graciela, who died suddenly in 1977. 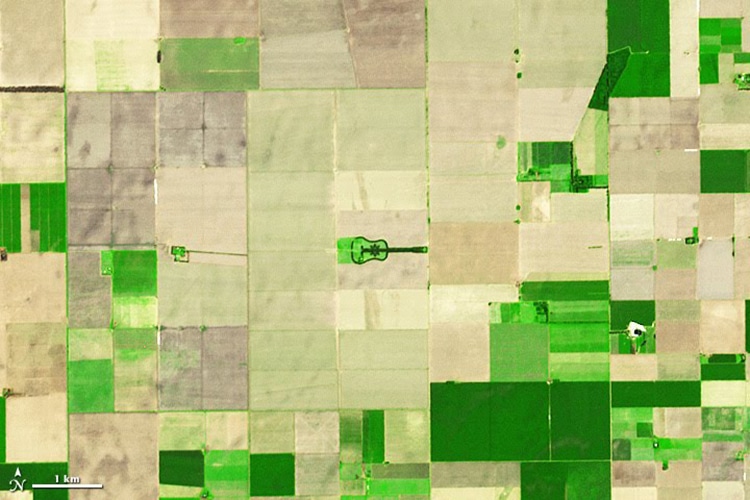