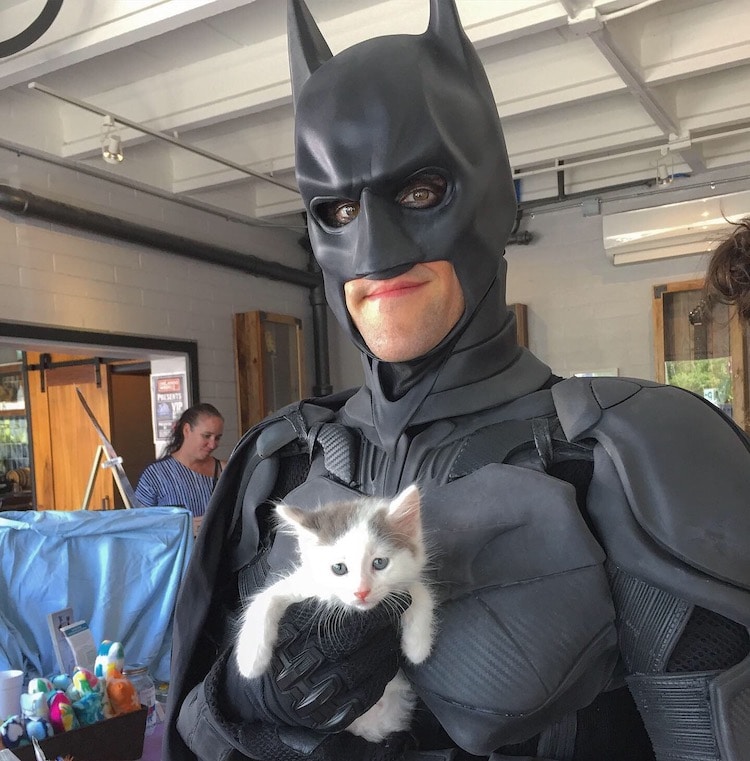 There are so many animals that need rescuing from dangerous situations that we could really use the help of a superhero. Well, it turns out that Batman has been here for us all along—sort of. Chris Van Dorn isn't Bruce Wayne, but he does don a costume just like the famous caped crusader. Clad in the iconic outfit and equipped with his trusty “Bat Mobile,” he is an animal transport for cats and dogs requiring assistance in getting to a no-kill facility, foster, or forever home. Van Dorn is based in Florida and travels within the state and beyond to make sure that these animals have a safe journey.

Van Dorn was called to this work after he and his family rescued their dog, Mr.Boots—an Australian Shepherd. Boots was found emaciated and roaming the woods of Alabama. With the help of a couple of nonprofit organizations—including one that flew Boots to safety—he has been a beloved member of Van Dorn's tribe. The story of Boots inspired the man to give back, and he came up with the nonprofit Batman4Paws. It was established in 2014, and Van Dorn has helped numerous animals since.

We spoke to Van Dorn about his work, from how it began to where it’s going—including how you can support his efforts. Scroll down for My Modern Met's exclusive interview. 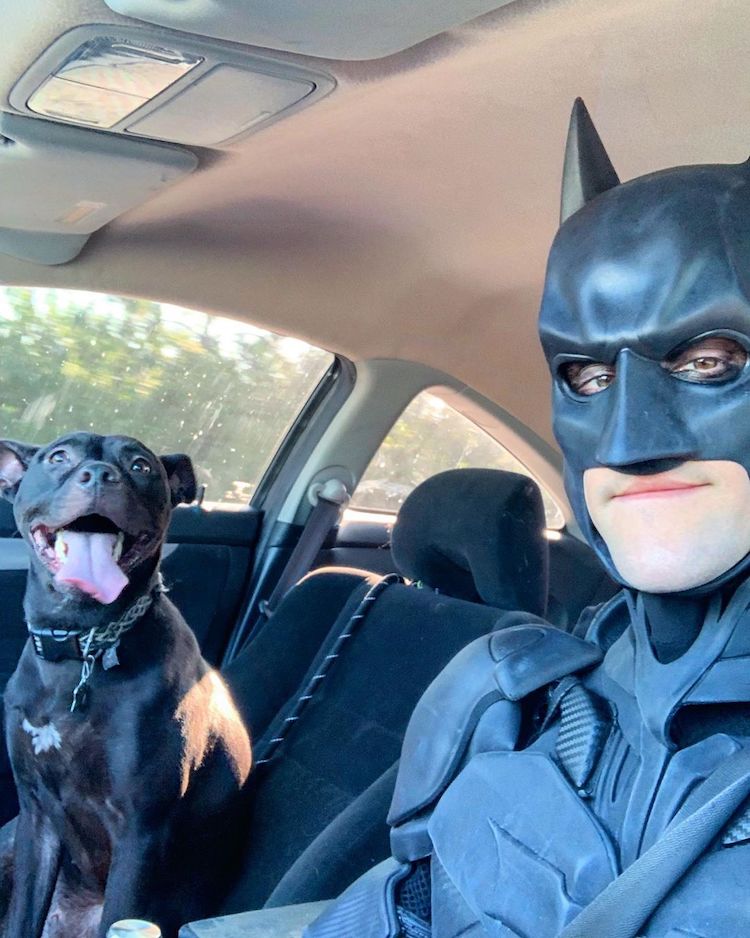 Where did the idea of dressing up like Batman come from?

The idea of dressing up as Batman came to me while I was in the shower trying to think of what I wanted my nonprofit to embody. I was kind of just in a state of remembering random acts of kindness and I remembered seeing a guy named Lenny Robinson who volunteered at children's hospitals as Batman. He had a viral video of him getting pulled over on his way to the hospital, and that's when it kind of hit me that bringing Batman and all the good he symbolizes into animal rescue would be a pretty cool idea. 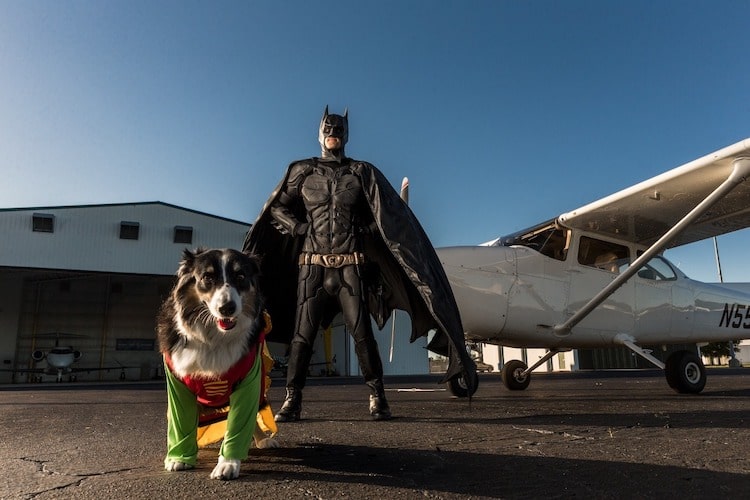 You started Batman4Paws after bringing home your own fur-friend, Mr.Boots. Can you describe the adoption process and how it inspired you to act?

The adoption process with Mr.Boots was through a nonprofit called Dog Liberator and my dad had to write an essay on what kind of environment Mr.Boots was going to be in and basically what overall day to day life would look like for him. My whole family grew up around animals and it's pretty plain to see that we're all huge animal lovers so our application was accepted and Mr.Boots has been a part of the family ever since.

Having Mr.Boots really impacted not only me but my whole family. He really is a special dog, he's so attentive and crazy smart, it's almost weird. He can understand words like “walk” and “dog park” and will just get up and stare at you till you take him. He's also made me healthier by being more active and his whole rescue story being found wandering around the woods in Alabama and getting flown to safety by Pilots N Paws was just really inspiring to me since I was getting my pilot's license, too. It makes me really happy to give that back to another person and be able to pay it forward with their own special rescue animal. 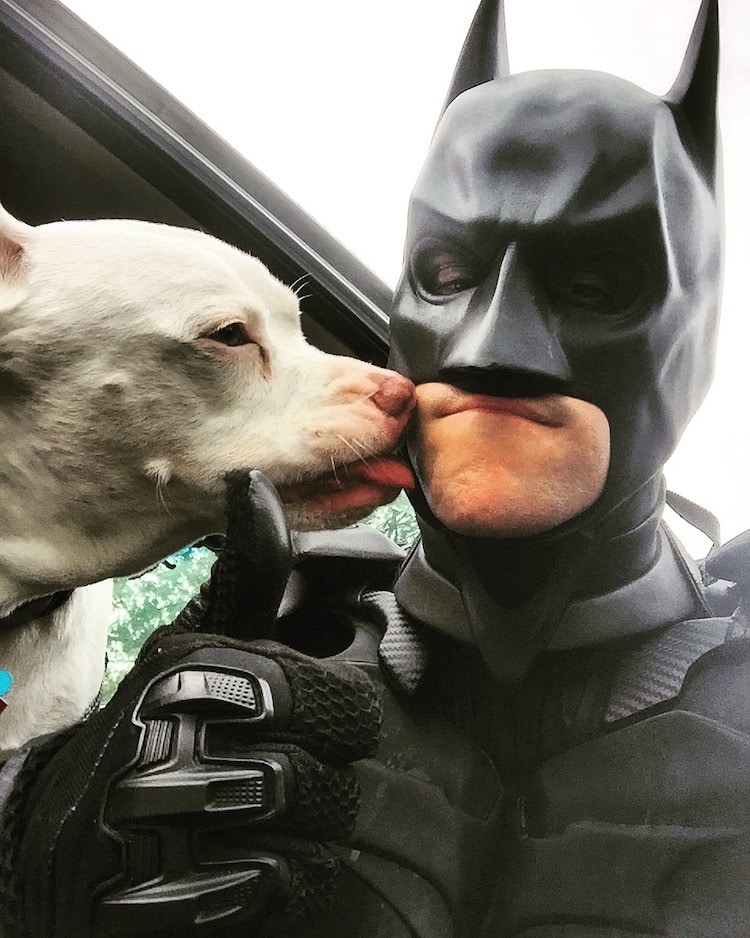 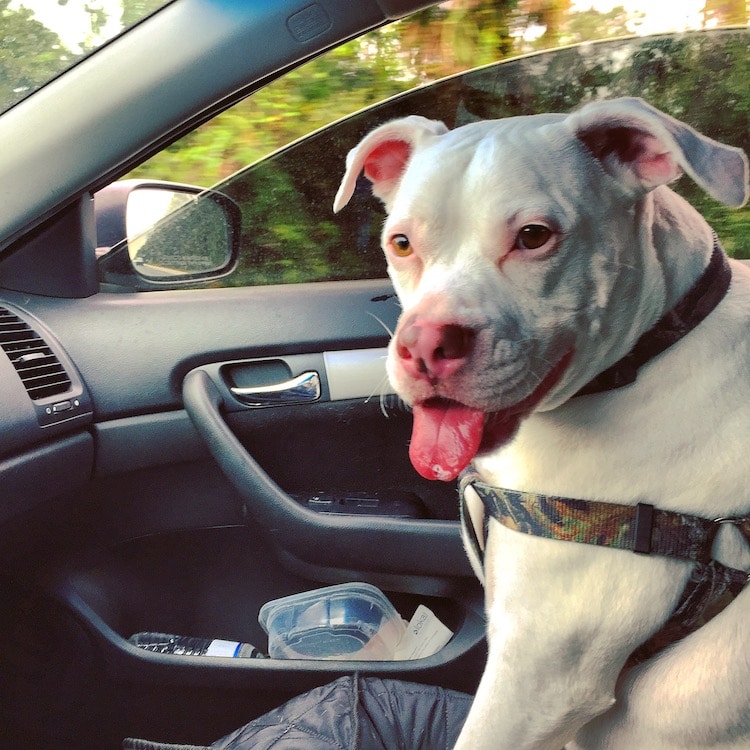 You embark on long-distance trips to help rescue animals. What's the farthest you've ever traveled?

The longest and most difficult rescue that Batman undertook has been for the Polk County Bully project with the SPCA of Florida which aims to make Polk county no-kill by 2025. Sadly, it is currently the number one kill shelter in Florida. Batman went from Orlando, Florida to Addison, Vermont, with an overnight stop at his aunt's house in Reading, Pennsylvania.

This rescue was difficult in many ways. The first was just the amount of dogs he had to fit in his Batmobile. Batman had to get Ty (a 90lb American Bully), Bella (a 60lb Pit Bull Mix), and two Pit Bull Puppies named Zeus and Ace to fit into his small two-door Honda Accord. Then it was dealing with all the stops along the way making sure each dog had ample time to use the restroom. Ace and Zeus, the two puppies were definitely a handful on their own. They ended up making a pretty big mess in his aunt's garage. They were these cute adorable puppies on the outside but inside they were Tasmanian devils. 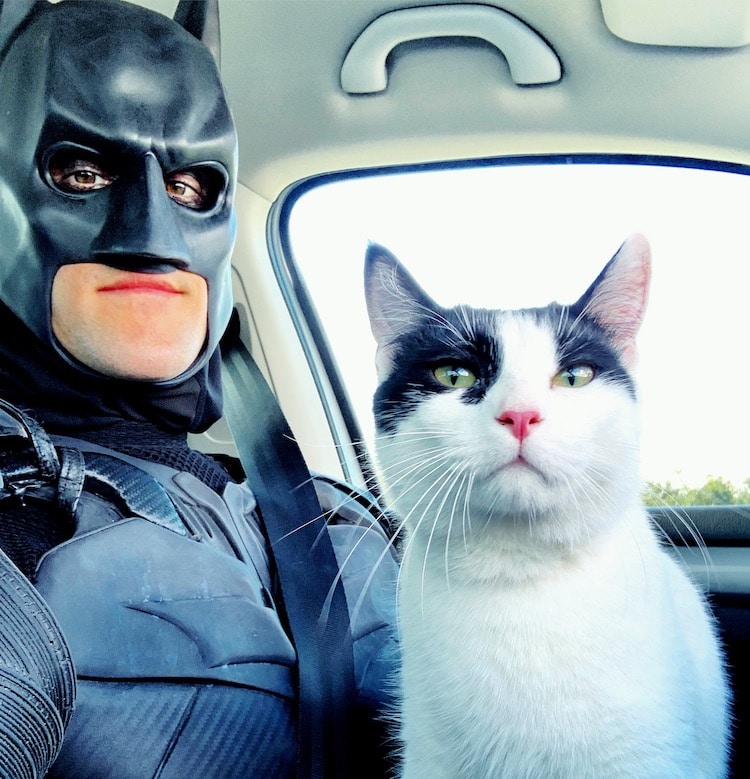 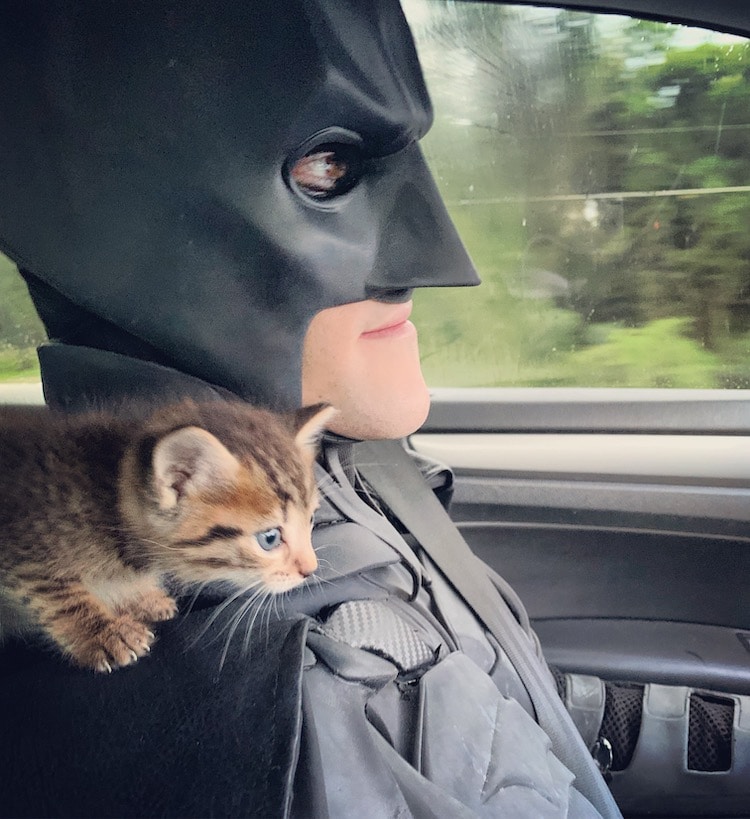 What is your most memorable rescue story as Batman?

It's hard to pick just one memorable rescue story since they are all so unique and important. It's part of the reason I started a blog. I wanted to be able to highlight the miraculous journeys these remarkable pets go through to get to where they are.

Ollie the Shih Tzu escaped an Amish puppy mill; Bella was found in her owner's house weeks after her long-time owner passed away; and Linda the Schnauzer escaped the harsh political and economic conflict in Venezuela to make it to a foster in Miami and found her forever mom up in South Carolina.

On top of all these traumatic experiences, most of them just narrowly escaped being euthanized. But if I had to pick one I would say the most important story for me is my own dog Mr.Boots rescue story because it was the catalyst to get me into rescuing animals in the first place, along with veganism. 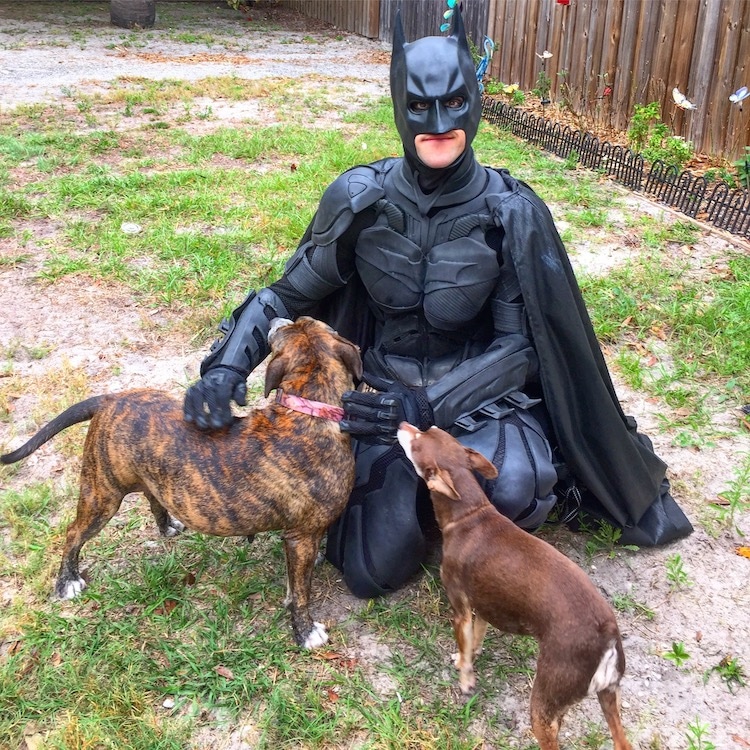 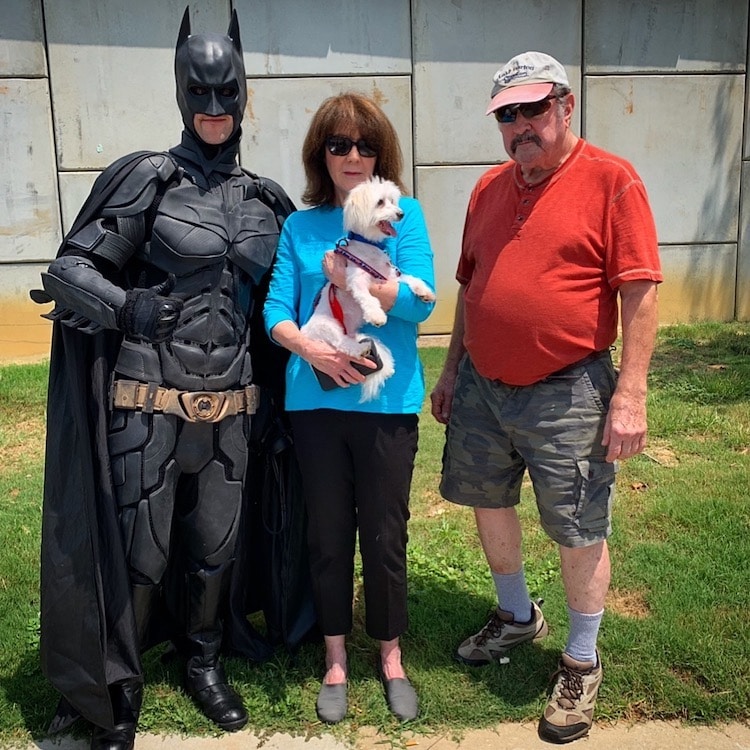 You're looking to grow Batman4Paws. How do you envision this growth?

My immediate vision for Batman4Paws is to expand into a bigger vehicle, such as an RV, which will allow me to not only take more animals more comfortably but also allow me to go longer distances. I'm in talks with Thor Motorhomes for sponsorship so hopefully, that pans out. I would also like to create a team of superheroes that can rescue animals across the world so it's not just dependent on me but inspires others to get involved, thus doubling and tripling the impact and animals saved. 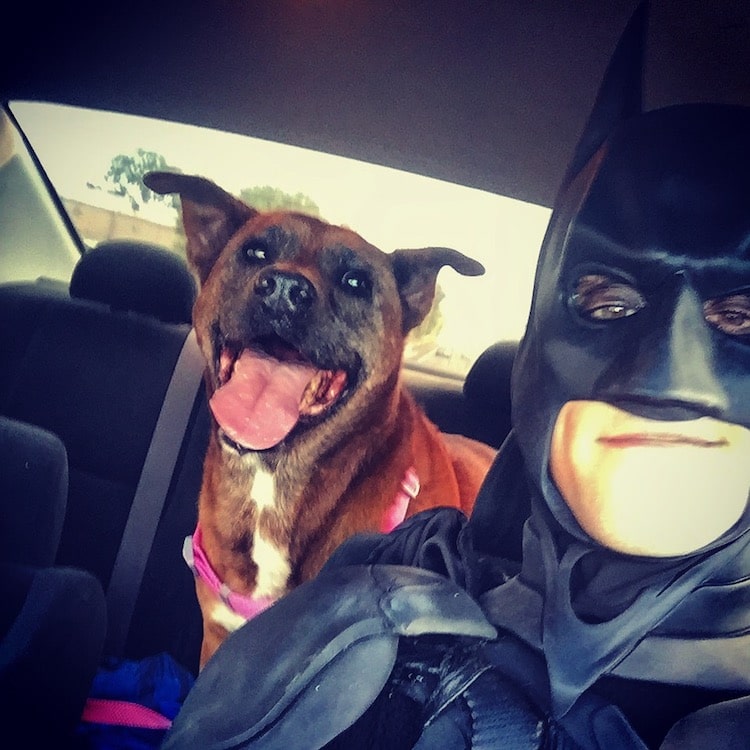 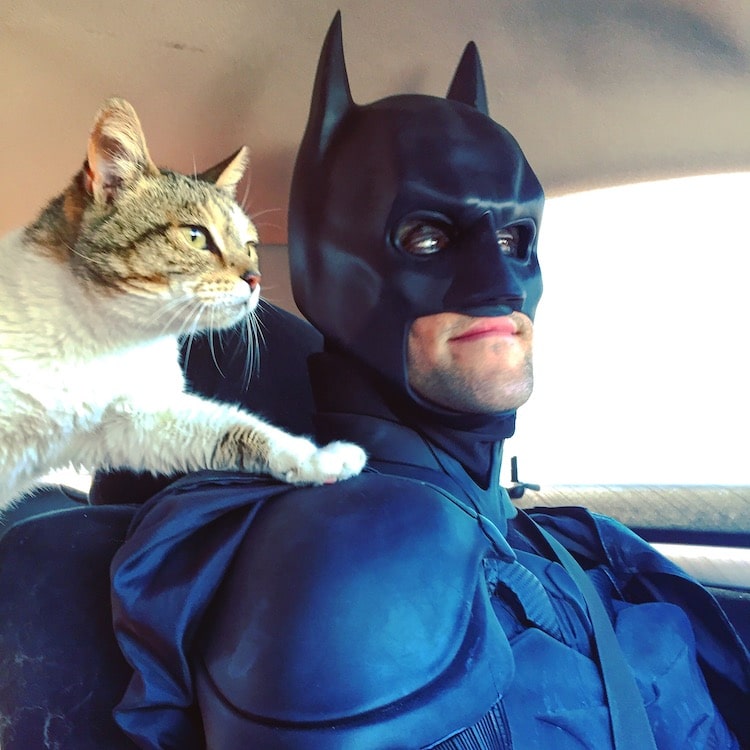 What do you think is the most productive thing animal lovers can do to support rescue pets, even if they are unable to rescue an animal themselves?

I think the best way for others to help animals in need, if they can't give a pet a loving forever home, is to volunteer at their local shelter and get involved. If they can't do that then I would say donate to the cause. If they would like to start transporting pets as Batman does, there's an awesome site called Doobert that helps get pets to new homes and is how Batman first got started.

What's the best way to support your organization?

The best way to support Batman4Paws is to give a dog or cat a loving furever home. Once the cages are empty, Batman can retire. If they'd like to donate to his cause in emptying the cages they can go to his website. 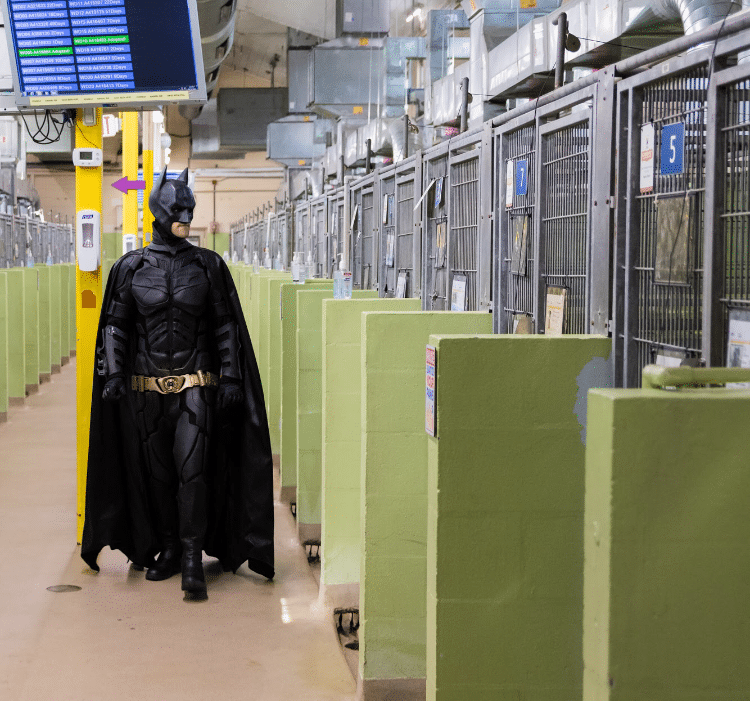 Photographer Empowers Sick and Disabled Children by Transforming Them into Superheroes

Make-A-Wish Helps Batkid Save the City of San Francisco