How come you guys never told me this iPhone trick? I feel duped. pic.twitter.com/2RfRhI4Y1X

The iPhone is packed with helpful features that make using it a little easier. But as it turns out, many of us are unaware of such useful tricks. Luckily, food blogger Krissy Brierre-Davis recently shared one that has the internet stunned. In a tweet, she uploaded a screenshot of the iPhone keyboard in the Messages app. The typed text revealed a very simple and helpful trick. Brierre-Davis explains the cool iPhone trick (with a healthy dose of humor): “If you click and hold the space bar, you can move the cursor instead of trying to drag the cursor itself with your fat thumb lol.” Accompanying the screenshot was Brierre-Davis’ commentary. “How come you guys never told me this iPhone trick? I feel duped.”

“I thought I was an idiot for never having discovered this gem myself,” Brierre-Davis said. “My mind was blown. Literally.” But the blogger wasn’t the only one who didn’t know this helpful tip. Shortly after posting the tweet, it went viral, with people having similar reactions that she did. We at My Modern Met didn’t know about this tip either, but we tried it and the trick works like a charm. Once you long-tap on the space bar, the entire keyboard goes blank and essentially turns into a laptop trackpad. You can move your finger anywhere and it will correspond with the area in the text box. Actually, here’s an added tip: you can long-hold any part of the keyboard and get the same functionality! Mind. Blown.

If you didn’t know about this trick, don’t feel bad. Despite being a feature since 2015 with the iPhone 6S, there are plenty of people (including technology reporters) who were unaware of this game-changing iPhone gem.

Are you always making typos? The next time you need to fix one, try this cool iPhone trick. 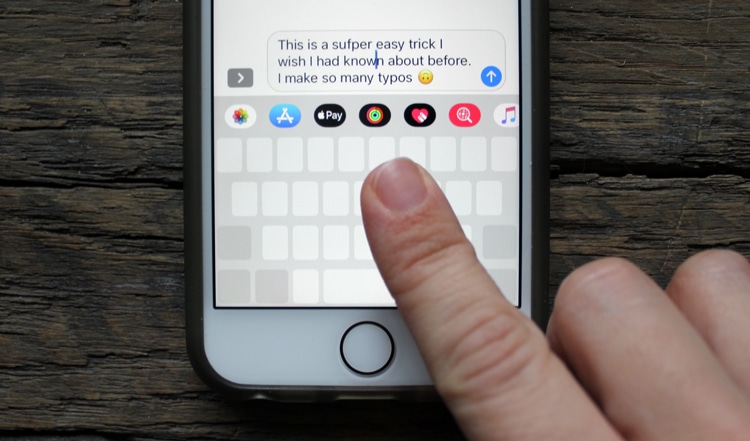 Simply long-tap on the space bar and the entire keyboard will go blank and essentially turn into a laptop trackpad.

Didn’t know this tip? (It was first introduced in 2015.) You aren’t alone. Food blogger Krissy Brierre-Davis changed plenty of lives with her viral tweet.

OMG. This is like gliding your scissors across wrapping paper 💀🔥🙌🏼

I was today years old when I found this out

I feel like an all powerful email iPhone god now with this tool in the arsenal! pic.twitter.com/dasKLTGiCM

Didn't know this trick? Share
Like My Modern Met on Facebook
Get Our Weekly Newsletter
Become a
My Modern Met Member
As a member, you'll join us in our effort to support the arts.
Become a Member
Explore member benefits