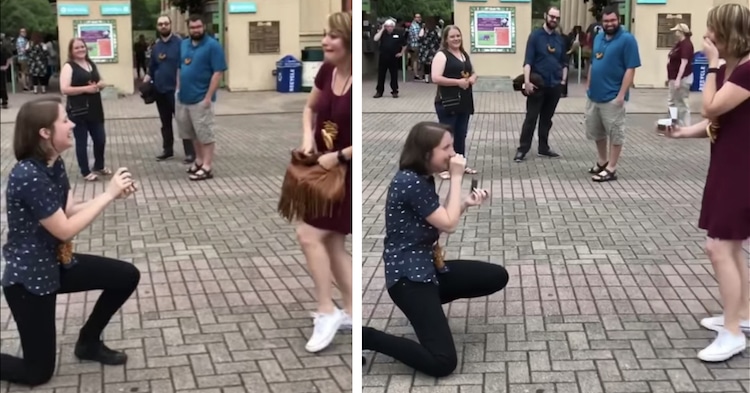 Earlier this year, we watched in awe as two halves of a happy couple proposed to each other at the same time. Unbelievably, the heartwarming phenomenon has happened a second time, proving again that some things truly are meant to be.

To reenact their first date, Tennessee couple Becky McCabe and Jessa Gillaspie planned an outing at the Memphis Zoo. As they posed for what Gillaspie thought was a picture, McCabe got down on one knee and asked for her hand in marriage. Clearly shocked , Gillaspie did not respond right away. Instead, she picked up her purse and pulled out ring of her own, causing the still-kneeling McCabe to break into laughter before the happy couple hugged.

“I had no idea she planned to propose, and she had no idea I planned to propose to her!” Gillaspie, who uploaded the video to Facebook, wrote. “We were both so surprised!!!!” Since sharing the adorable footage, the couple's coincidental story has gone viral, which has been a pleasant surprise for both of them.

“We had no idea this would blow up so quickly!” Gillaspie says. “But I can’t say I’m not thrilled, because all I’ve ever wanted was for Beck and the world to know how much l love her. We are overwhelmed with all of the positive responses. Really, you guys have no idea how much that means to us!”

McCabe and Gillaspie reportedly plan to wed next summer. If you'd like to follow their engagement until then, you're in luck: given the popularity of the post, the happy couple has come up with their own cute and clever hashtag: #TheMcBabes.

When Becky McCabe and Jessa Gillaspie decided to recreate their first date at the Memphis Zoo, they had no idea what they were in for. See their adorable double proposal video below!

All images via Jessa Gillaspie.