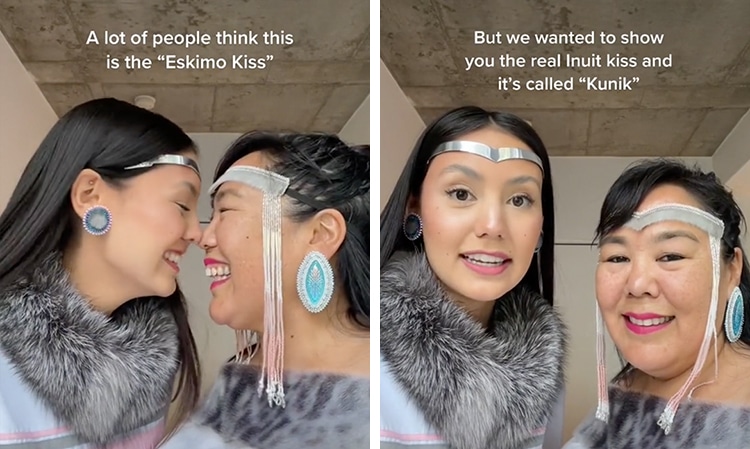 The term “eskimo kiss” might conjure up a cute image of two people rubbing noses; however, the traditional greeting is often misunderstood by Western culture. In a bid to teach more people about Inuit traditions, self-proclaimed “Proud Indigenous” woman Shina Novalinga shares educational videos on TikTok. In one of her most recent videos, she and her mother demonstrate the true “eskimo kiss,” which is actually called a kunik.

The word “Eskimo” is often used to refer to Inuit and Yupik individuals, as well as other Indigenous Alaskan people. However, it's important to note that many people consider “Eskimo” a derogatory term because it was widely used by non-Native colonizers. Novalinga says in her TikTok bio, “I am Inuk,” which is the singular term for Inuit.

In the video showcasing the kunik kiss, Novalinga and her mother Kayuula explain that they don't rub noses. Instead, they actually press their nose against someone’s cheek. “Usually it's done with a lot of emotion,” Novalinga says. “The more love you have for a person, the stronger you do it.” The pair demonstrate the affectionate gesture while they giggle, revealing their sweet relationship and deep bond.

Check out the video below, and follow Novalinga on TikTok for more eye-opening information about Inuit culture. Her mother also has her own TikTok account, where she shares more about being an Inuit woman.

Inuit woman Shina Novalinga and her mother demonstrate what an “Eskimo kiss” actually looks like. It’s actually called a kunik.

Her mom Kayuula often features in the videos, revealing their deep bond with one another.

All images via Shina Novalinga.