By Madeleine Muzdakis on September 8, 2020 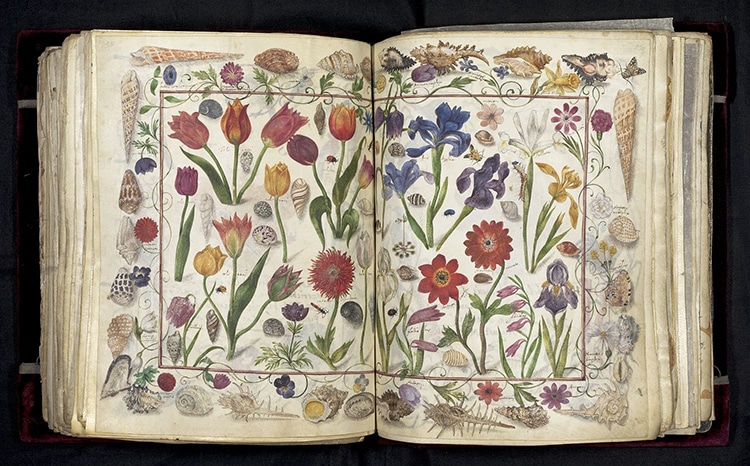 German library Herzog August Bibliothek Wolfenbüttel (HAB) recently acquired the Große Stammbuch of Philipp Hainhoferjust—a 400-year-old “friendship book” containing the signatures of emperors, kings, and princes—for about $3.3 million. Scholars thought the one-of-a-kind manuscript was lost until it reappeared in public in 2006. “Friendship books” of its kind are similar to present-day yearbooks. In fact, Große Stammbuch takes its name from the Latin Album Amicorum, which is a direct predecessor to the modern autograph book. These types of memorabilia were popular among university students in the 16th century. According to the HAB, roughly 25,000 documented Stammbücher (literally “family books”) exist in collections globally.

Hainhofer, a merchant who was best known for his curiosity cabinets, began collecting content for his Große Stammbuch in his university days. Between 1596 and 1647, he filled 247 pages with illustrious signatures. While working as a diplomat and art dealer based in Augsburg, Germany, Hainhofer encountered many aristocrats and renowned artists. Hainhofer would commission artwork to illustrate the pages surrounding important signatures. According to the HAB, the Große Stammbuch became widely known, and curiosity about the book allowed Hainhofer access to elite political circles. Today, the Große Stammbuch is considered the finest example of its genre.

Among the signatories included are the Holy Roman Emperor Rudolph II and Christian IV, King of Denmark and Norway. Both powerful figures in early modern Central Europe, the pages bearing each ruler's signature are richly painted. Rudolph II is depicted in a portrait and coronation scene by artist Daniel Fröschl. The page of Christian IV is simpler with only a delicately painted coat of arms. Powerful women of the age are also represented. In 1618, Elizabeth Stuart, Electress of the Palatinate, signed Hainhofer's book. Her mark rests above two large putti (cherubim) holding her coat of arms.

The purchase of Hainhofer's Große Stammbuch exposes the manuscript to the public for the first time in 400 years. The HAB plans to hold several exhibits centered around the work. The library will also digitize the book to make its artwork and fascinating history available to all through their website. Björn Thümler, Lower Saxony’s Minister for Science and Culture, described in a press release the joy that the book's purchase brings. He noted, “All those involved have put all their efforts into bringing the art-historical and cultural-historical masterpiece to the HAB in Wolfenbüttel. Duke August the Younger himself had already attempted to do so in 1648 after Hainhofer's death. The return of the Album Amicorum to Germany is not only in the interest of the State of Lower Saxony, but of Germany as a whole, for it ensures that this outstanding cultural treasure will be permanently accessible to the public.”

After 400 years, Hainhofer's Große Stammbuch will be brought home to Germany and united with his other papers housed at the HAB.

The Herzog August Bibliothek Wolfenbüttel (HAB) in Germany recently purchased a 400-year-old autograph book known as a “friendship book.” This Große Stammbuch of Philipp Hainhofer was considered lost until it reappeared in 2006. 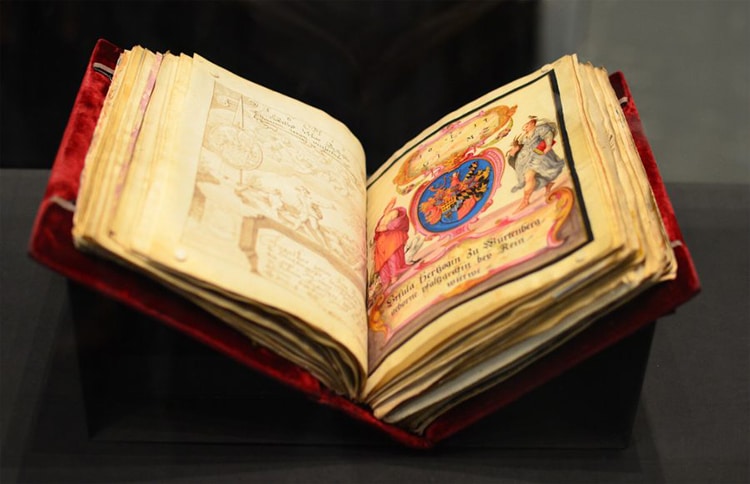 Many kings, emperors, and princes signed the book during Hainhofer's travels as a diplomat and art dealer. 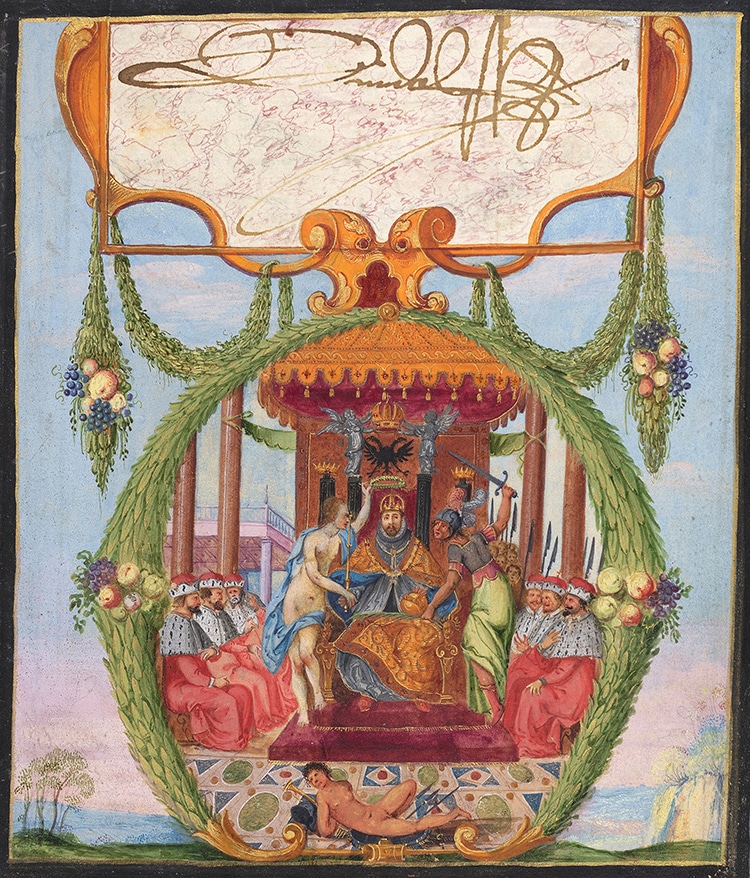 Hainhofer commissioned paintings and illustrations to accompany the signatures he collected. 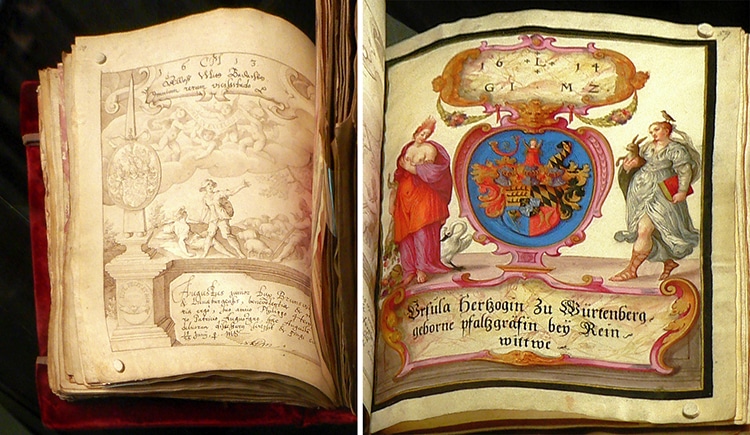 The HAB plans to display the friendship book in exhibits and online. The digitization process will make the book publicly available for the first time ever. 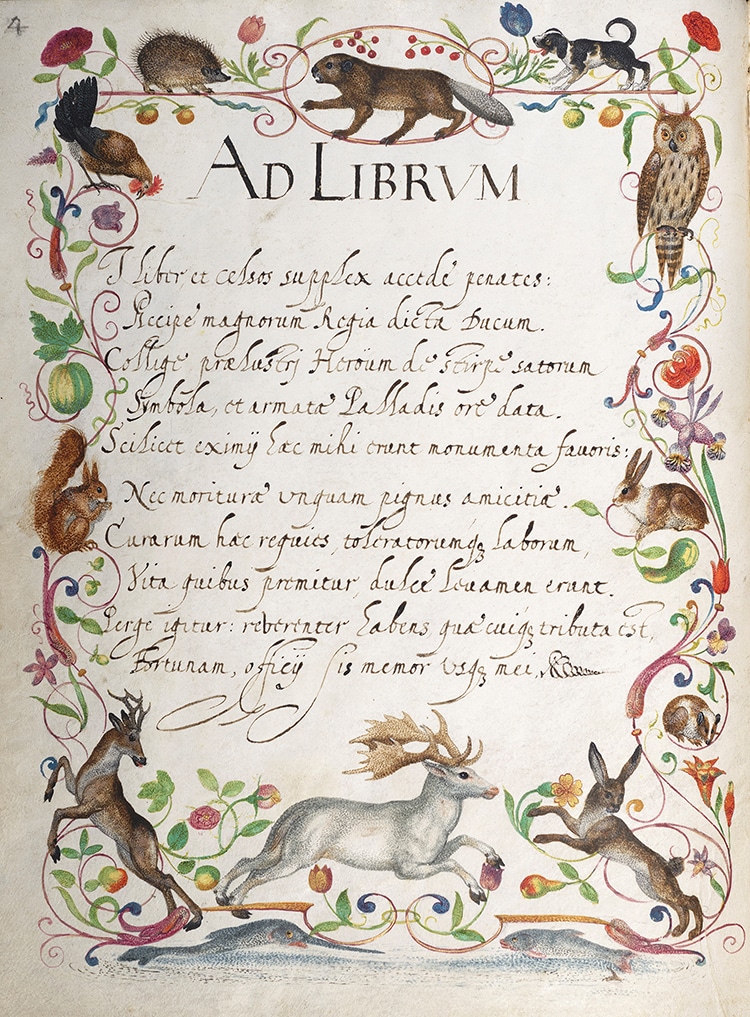 Latin poems addressed to the book and the reader, in a painted frame of dancing animals jumping over fruit and flower tendrils, birds above and fish below. (Photo: Herzog August Bibliothek)

Love this Book? Share
Like My Modern Met on Facebook
Get Our Weekly Newsletter
Become a
My Modern Met Member
As a member, you'll join us in our effort to support the arts.
Become a Member
Explore member benefits