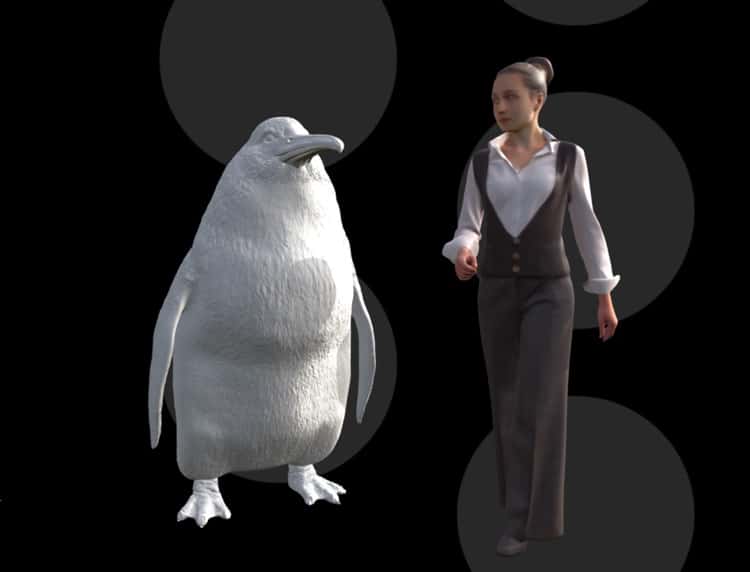 When we think of giant, extinct animals that once roamed the Earth, we're often picturing dinosaurs. But the truth is that researchers are continuously uncovering evidence of long-gone animals, many of which seem plucked from a science fiction film. New Zealand, in particular, has had a slew of discoveries that have revealed the country as a hotbed of giant, extinct animals.

Just what has been uncovered? For one, a gigantic penguin the size of an average woman. Fossils found by amateur paleontologist Leigh Love in 2018 show the bones of Crossvallia waiparensis. This mammoth penguin roamed the Earth during the Paleocene epoch—about 66 to 56 million years ago. Standing at 1.6 meters (5 feet 3 inches), it would have towered over today's Emperor Penguin, which grows to 1.2 meters (3 feet 11 inches).

It's not just its height that's impressive. The massive penguins would have also weighed between 70 and 80 kilograms (154 to 176 pounds), making them seem more on par with humans than today's penguins. Researchers determined the presence of this new species after examining the fossil, which was of the penguin's leg bone. In a recently published study, they detail their analysis of the fossil against the fossils of modern and known ancient penguins. 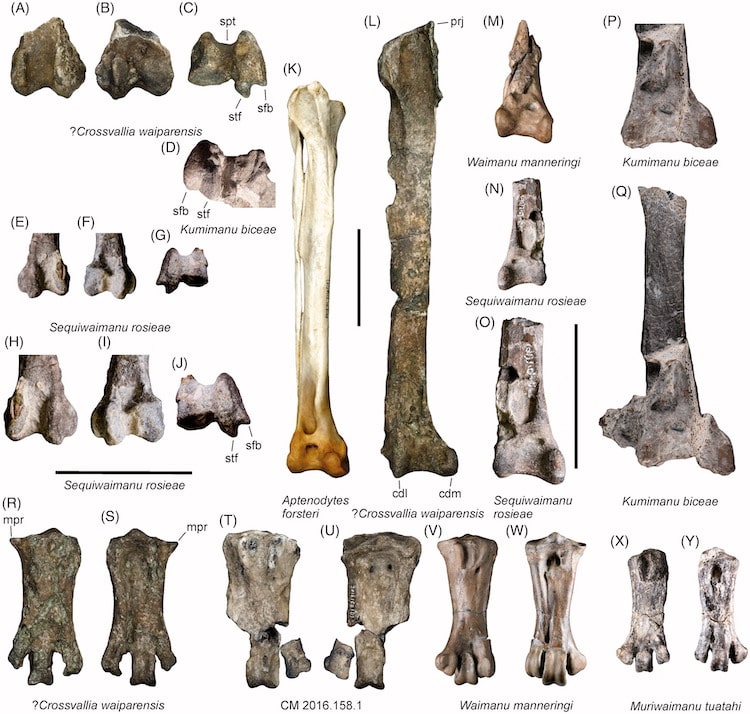 Leg bones of C. waiparenis compared with that of the Emperor Penguin (Aptenodytes forsteri) and other penguins from the Paleocene epoch. (Photo: G. Mayr et al.)

Interestingly, the closest known species to C. waiparensis is another giant penguin from the same era—Crossvallia unienwillia. The partially fossilized skeleton of this bird was discovered in 2000 in Antarctica. Though the giant landmass connecting New Zealand and Antarctica began splitting apart long before the era of the monster penguins, the environments were still quite similar to one another.  “When the Crossvallia species were alive, New Zealand and Antarctica were very different from today–Antarctica was covered in forest and both had much warmer climates,” explains Dr. Paul Scofield, Canterbury Museum Senior Curator of Natural History.

The leg bones of both species show similarities that may indicate they were more inclined to swim or perhaps didn't yet have the ability to stand on their feet. With the discovery of C. waiparensis, paleontologists are given another clue to the evolution of penguins and it seems clear that they started off quite large early in their development. Now they are hoping that the site where the fossil was unearthed will yield even more findings and help them learn even more about these prehistoric giant penguins.

The announcement of the giant penguin comes on the heels of another exciting revelation about New Zealand and its extinct fauna. Paleontologists have also uncovered the world's largest bird, Heracles inexpectatus, which was a giant parrot that lived 19 million years ago. Standing at 1 meter (3 feet 3 inches) and weighing 7 kilograms (15 pounds), its impressive stature was the inspiration behind its Herculean name.

The public will have the opportunity to see some of these fossils in person during an exhibition about prehistoric New Zealand at the Canterbury Museum sometime in 2019. For now, the museum has also created a 3D model of C. waiparensis that's viewable online.