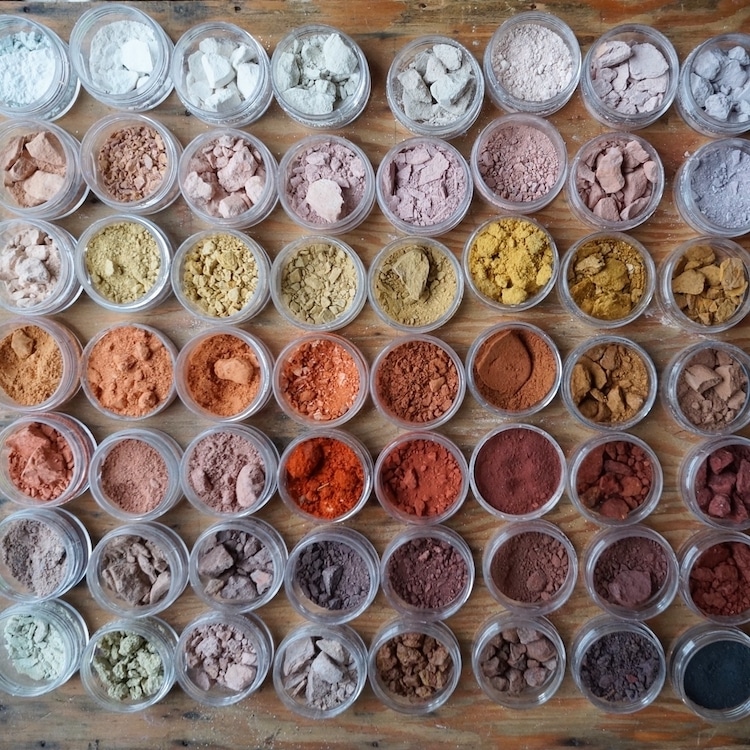 Heidi Gustafson is an artist and pigment forager who is archiving ochre from around the world. Through her artistic research studio Early Futures, she focuses on finding and documenting these iron-based earth and pigments. This requires her to take to the land. Located in rural northern Washington state, Gustafson scours shorelines and scrapes rocks in order to gather shards. The elements are then ground into pigments that she studies, catalogs, and sells to artists for them to use in their own work.

In order to possess an exhaustive ochre archive, Gustafson's project is collaborative and open to people everywhere. This is vital because ochre varies based on the location of where it is found, and the environmental conditions can be very different from place to place.

Working with collaborators has resulted in some very special pigments in her archive. “The collection,” she explains, “includes hundreds of ochres, gathered by citizens around the planet, including spiritually significant ochres such as kokowai from New Zealand, ‘dm from Iran, pultewiš-‘enen and hilhil from California and geologically significant ochres like GOE (Great Oxidation Event ) two billion+ years old goethite from Australia, and wastewater vivianite from Taiwanese industrial plants.”

We spoke with Gustafson about her work with ochres, from how she became interested in them to what we can learn from variations of the same hue. Scroll down for My Modern Met’s exclusive interview. 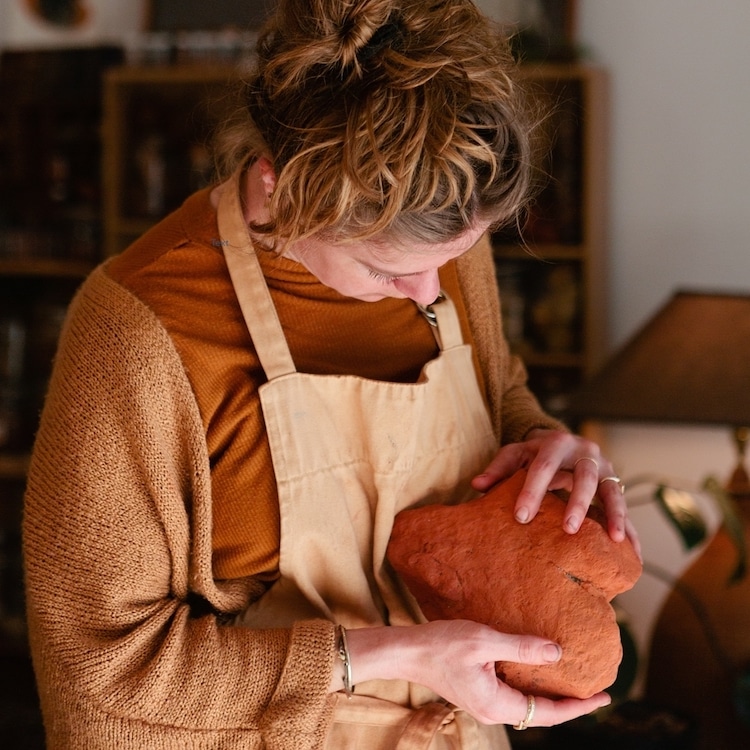 For those that might not be familiar with ochre, can you describe what it is?

Pigment is essentially crushed up matter. That powder creates material colors and shades that we experience in our art, built environment, clothes, computers, vehicles, etc. In the case of ochre and earth pigments, we’re talking about shattered rocks and soil—dust and crust of the earth. Ochre is the specific term for pigment that comes from iron oxides and iron-based minerals, clays, and soils. So generally, ochres are common minerals found world-wide that contain varying amounts of iron and oxygen. 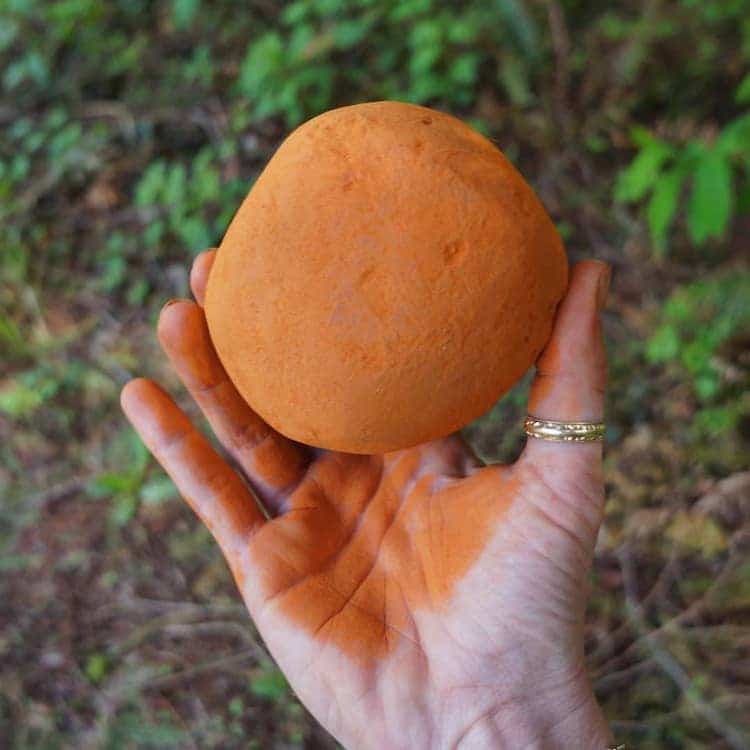 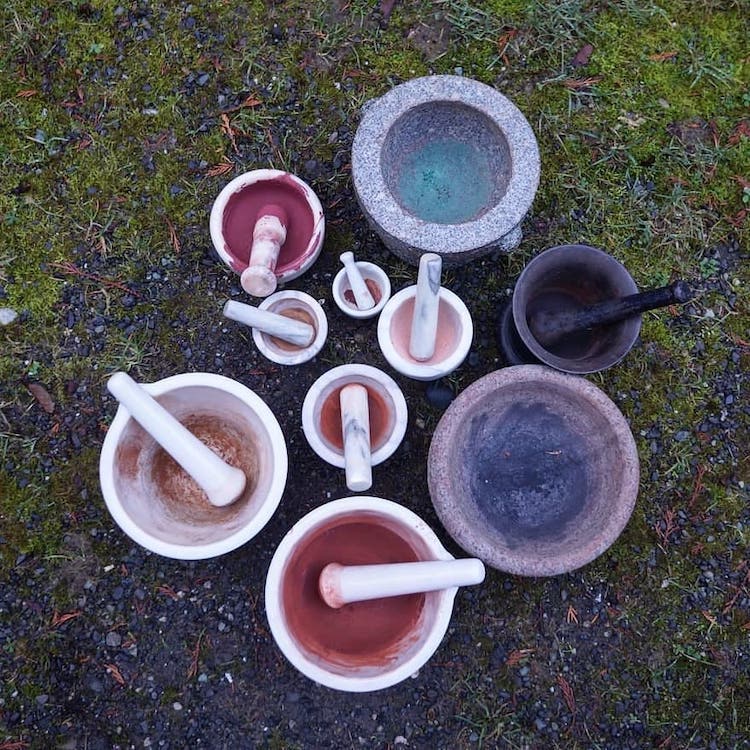 How and why do the pigments vary around the world?

Many people think of ochre as being “yellow” and they think of iron as “steel” or metallic. Actually, iron and ochre can create an entire spectrum of tones and pigments including purple, blue, and green—alongside the typical red, yellow, “earthy” browns, etc. These noticeable color differences largely depending on subtle diversity of amount of iron and other elements bound within the mineral, its age and how it was formed geologically (volcano? bacteria? rust? weathering?), where it is found (river? desert? cave?).

You can create further nuance by how you grind and process the pigment, what size and shape of particles you make, and how you treat the material (add heat? resin? water?). Each of those factors changed by a very small degree can radically alter the pigment’s color.

More importantly, a pigment’s elemental makeup changes its capacities in many other realms besides color! For example: how it affects us physiologically (medicine), how magnetic it is, how absorbent, how strong, how explosive, how meltable etc. These “colored pigments” are in fact used across several major industries, and their impact extends far beyond how we experience them as the “color spectrum.” 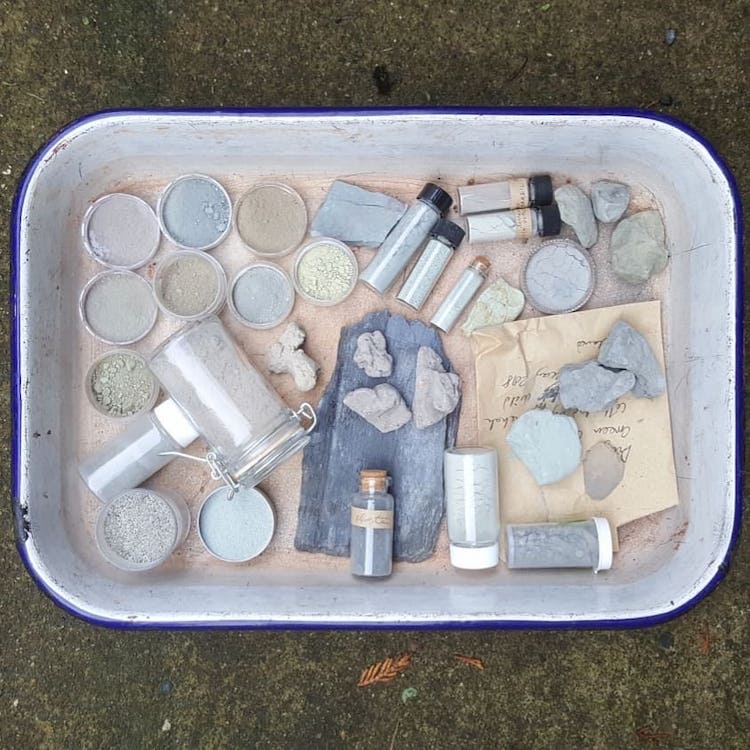 How did you get interested in the investigation of pigments and specifically ochres?

I was called to them in my inner life—dreams, meditation visions, and other inner experiences which left me feeling haunted—or maybe mandated?—that I needed to get to know ochre specifically. I ignored that call for a while—who cares about ochre, I thought—but couldn’t really deny it after I was led to an actual real-world ochre quarry, that blew my mind and broke my heart, that I had seen only in a dream. The place felt so sacred, but was a largely destroyed place. It doesn’t look like much to the average eye. People walk by it every day. That landscape became a teacher to me, and along the way, I learned it had been a sacred place and teacher to other ancestors and indigenous communities before me—prior to when the land was taken by colonists, built over by a highway and a strip mall and churches and condo developments with a little peanut-shaped swimming pool.

As I grew to get to know these places, histories, memories and what ochre was elementally—iron oxide material and humankind’s oldest pigment—I slowly realized its connection to the heart of Earth (which is iron surrounded by oxygen) and our blood (also iron carrying oxygen around), and most importantly, our past and future human cultures and diverse forms of intimate, creative expression—which are, like other forms of ecological diversity around the planet, being overwhelmed by homogenization and disconnection on many levels. 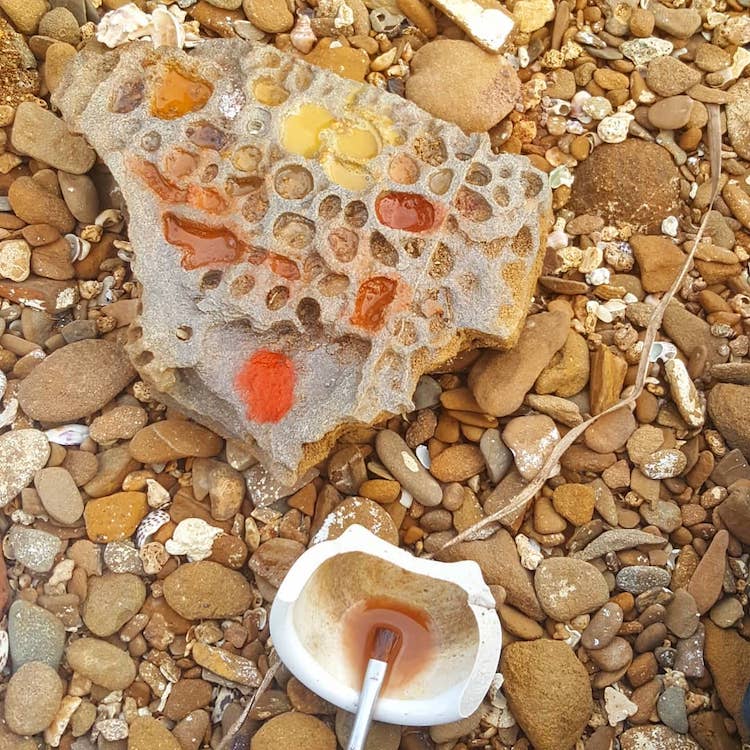 You say that you “forage for pigments.” What does that process look like?

Foraging for pigments is akin to other forms of nature observation and interaction—gathering medicinal plants, mushrooms, bird-watching, hunting, harvesting wild food, etc. For me, I tend to be trying to learn from and gather iron-rich minerals and other soils, which are extremely common. Sometimes this means looking at old mining maps, listening to ancient stories of places, tracking down lost and orphaned places. Sometimes it means talking to people who work the soil or dig holes or farm, people who know and work with land generally. Asking people if they’ve seen particular clays or run across outcrops of red earth. Other times, it means wandering and getting lost in a place that calls out to you for unknown reasons.

What are some of the places you've visited to search for them?

Around where I live—and this is similar with many other pigment foragers I know—following water often leads to exposures of minerals that make beautiful pigments. Water is one of the most essential revealers of pigments—so coastal areas, riverbeds, drain ditches, swamps, wastewater plants, etc. I’m most often in places that look like complete “dumps” and are secretly hiding with intensely rich mineral pigment. 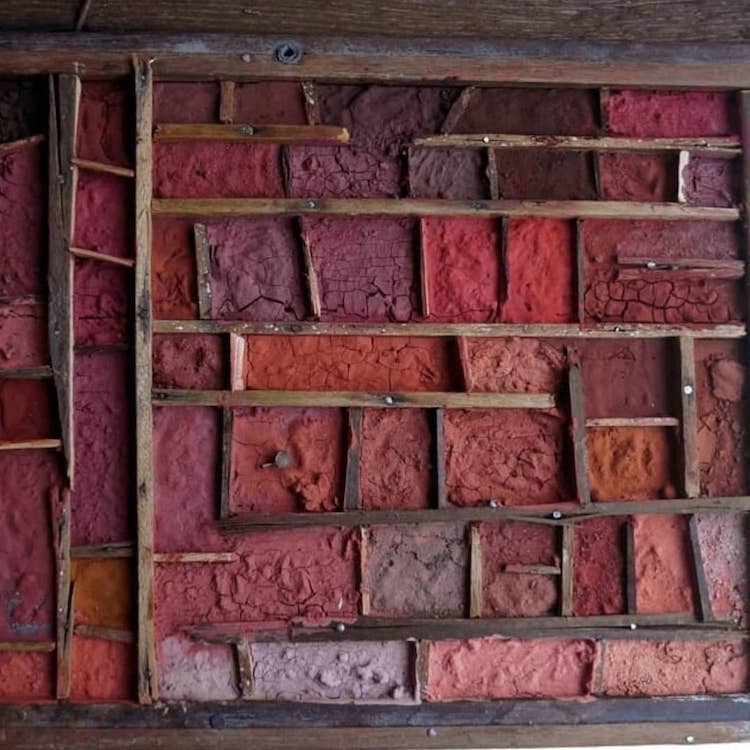 What can we learn from variations in color, such as the different types of red that we see?

I think the biggest realization to have when you are looking at a bunch of reds (perhaps swatches of color in a paint store, let’s say?) is that “red” comes from vastly different material and most of the time you have no idea where it’s coming from anymore. But red is always “made” from something. You can get a red that comes from mercury (cinnabar or “vermillion”), lead (red lead), arsenic (realgar), copper (coppera); from pregnant female insects that are killed when they are most pregnant (cochineal); 1,500-year-old cedar fungal rot (it’s a super effervescent, gorgeous red!); synthetic petroleum chemicals; and of course, many non-toxic, ancient iron minerals.

What you learn is how to be curious about the material stuff of red, not its typical “symbolic” meaning—how the meaning of red can change on actual, elemental and lived-experience levels. Red, carbon-rich life juice from a female insect may carry a different sense of sacrifice or mood, might make you think or feel differently than red from a 2 billion-year-old iron mineral made from the cast of the earliest organisms that breathed into existence Earth’s oxygen-rich atmosphere.

Personally, I think these two different reds, made at different times on the planet in very different ways, impact us differently. Seems super logical. And this leads me to believe we could be more deliberate about how we choose the materials for our creative expressions. Perhaps, it’s enough of a start to simply consider these rocks and bugs and pigments as already a creative act, an expression of Earth’s mysterious, elemental imagination. 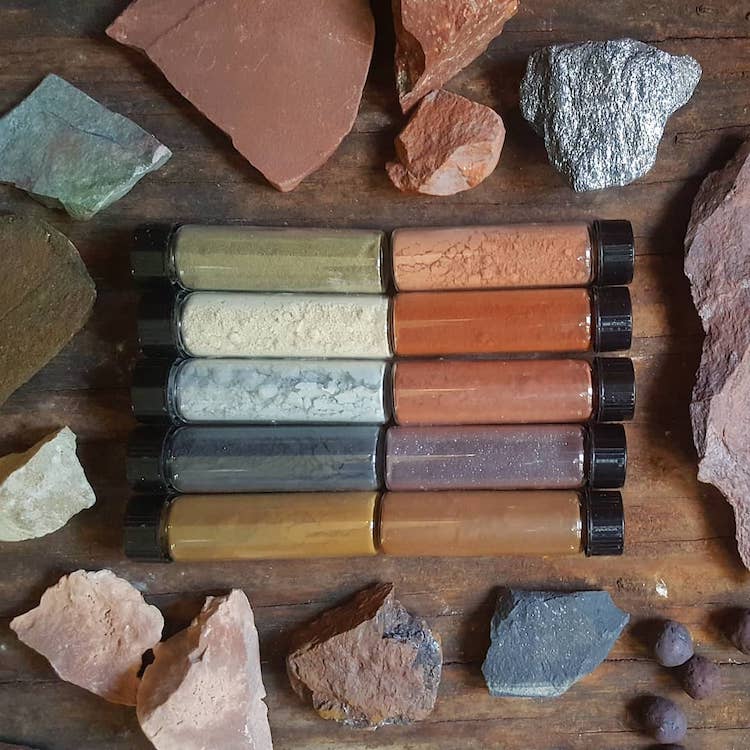 What are some of the rarest and/or unusual ochres to enter your archive?

One of the strangest ochres I love is a deep freaky “wine-dark” or purple iron oxide ore (probably has some manganese in it), from an abandoned boat wreck in a shipyard on an island off the Carolinas of North America. We have no idea where this iron came from, where it was going, how it was going to be used. There is no other ochre I’ve seen anywhere in the world like this and I have about five small worn rocks that were sent to me by my favorite alchemist and ink-maker whose brother discovered the material. Total timewarp magic! 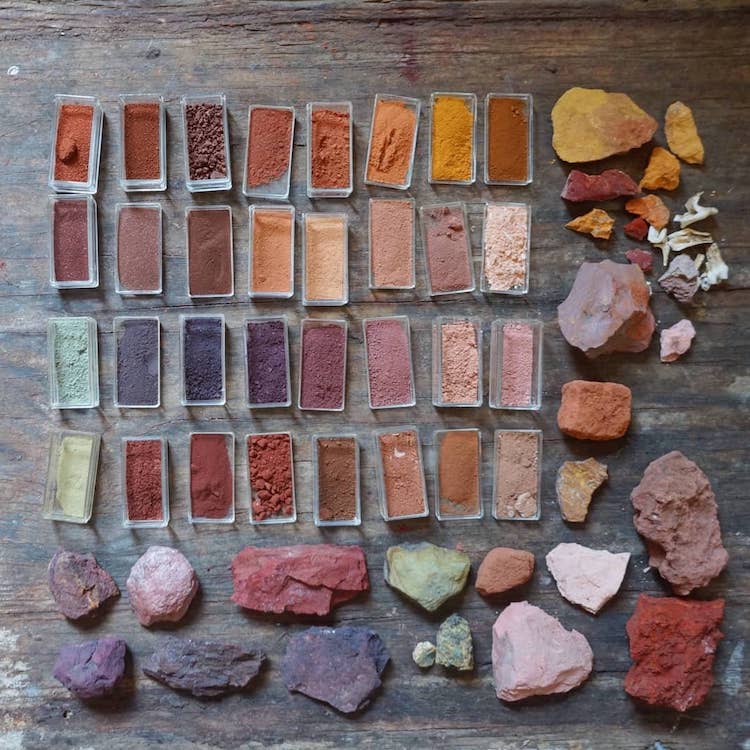 What's next for your ochre archive?

I’m working on bringing ochres together, letting them tell me what’s next. I’m also making more and more personal pigments that are used for burials and for working with restoring ancestral connection, and I love translating places into pigments for people, artists, collectors. Long term, I’m working on building a sanctuary and place, with a stone dovecote(!), where people could come and spend time with these minerals and learn more about what they are up to.

How can someone get involved in the project?

Anyone can get involved! I welcome contributions of local material, or to hear stories of ochre or pigment. You can follow along with some of the work I do in my studio on Instagram or through my website. I love when people reach out to get in touch to send, trade, or exchange pigments and knowledge, ask questions, or share their own relationship with the land, their dreams, and visions of places. All of my research and work is sustained by small contributions and donations from generous souls. 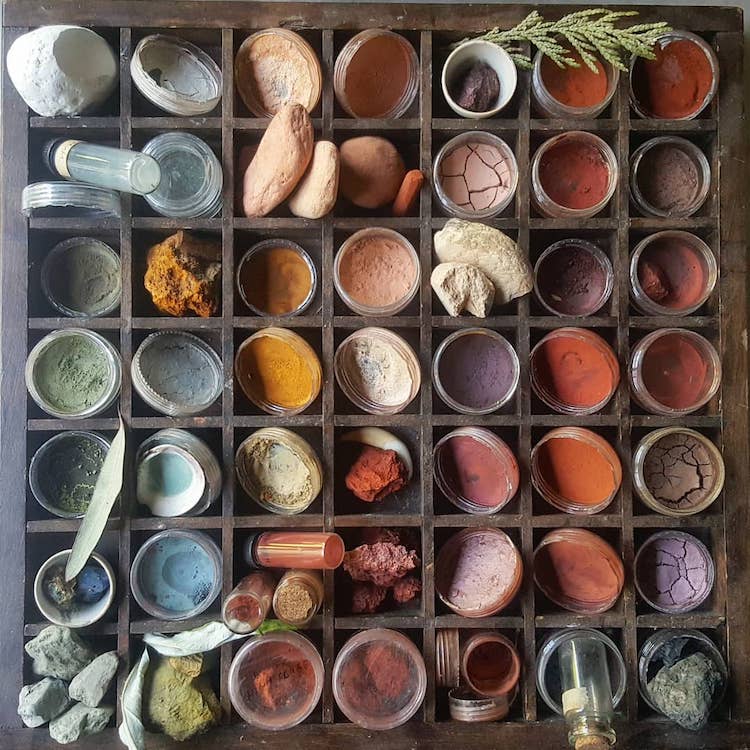 2,500 Pigment Samples Collected from Around the World Are on Display in Harvard’s Labs