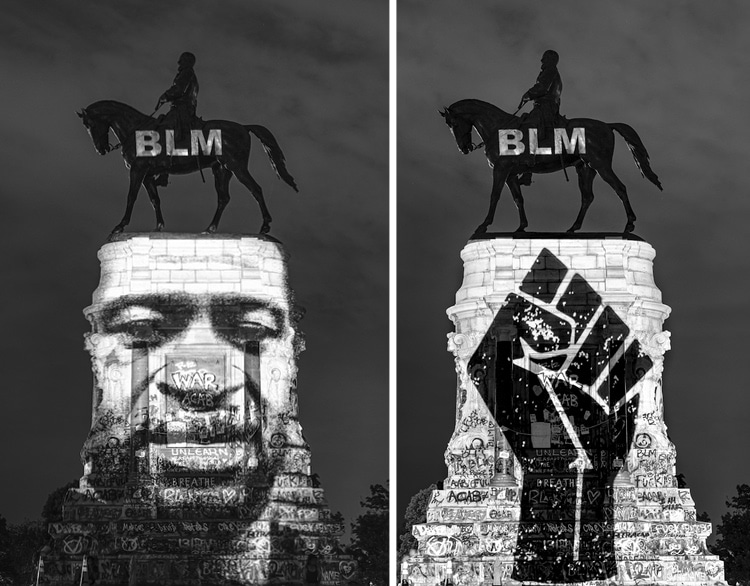 In Virginia, one artist is helping his community reclaim a controversial monument in the name of Black Lives Matter. The Robert E. Lee Monument now stands as the only remaining Confederate statue on Richmond's historic Monument Avenue. While litigation ties up the statue's removal, light projection artist Dustin Klein is using his art to change the meaning of this contentious monument.

For the past two months, Klein and a small group of collaborators have been projecting images and videos of Black citizens killed at the hands of police, as well as historic Black men and women who have shaped our history. The faces of George Floyd and Breonna Taylor have each been projected onto the monument as a moment of healing, while figures like Frederick Douglass, Harriett Tubman, and Billie Holiday serve to remind us of the great Black thinkers throughout history.

For the project, which has been named Reclaiming the Monument, Klein is selling prints of the projections in order to support the Black Lives Matter movement, as well as other local causes. His hope is to continue his work until the monument is permanently removed and Richmond can begin a new chapter on Monument Avenue.

We had a chance to speak with Klein about the impetus behind the project and how his spontaneous initial act transformed into something bigger. Read on for My Modern Met's exclusive interview. 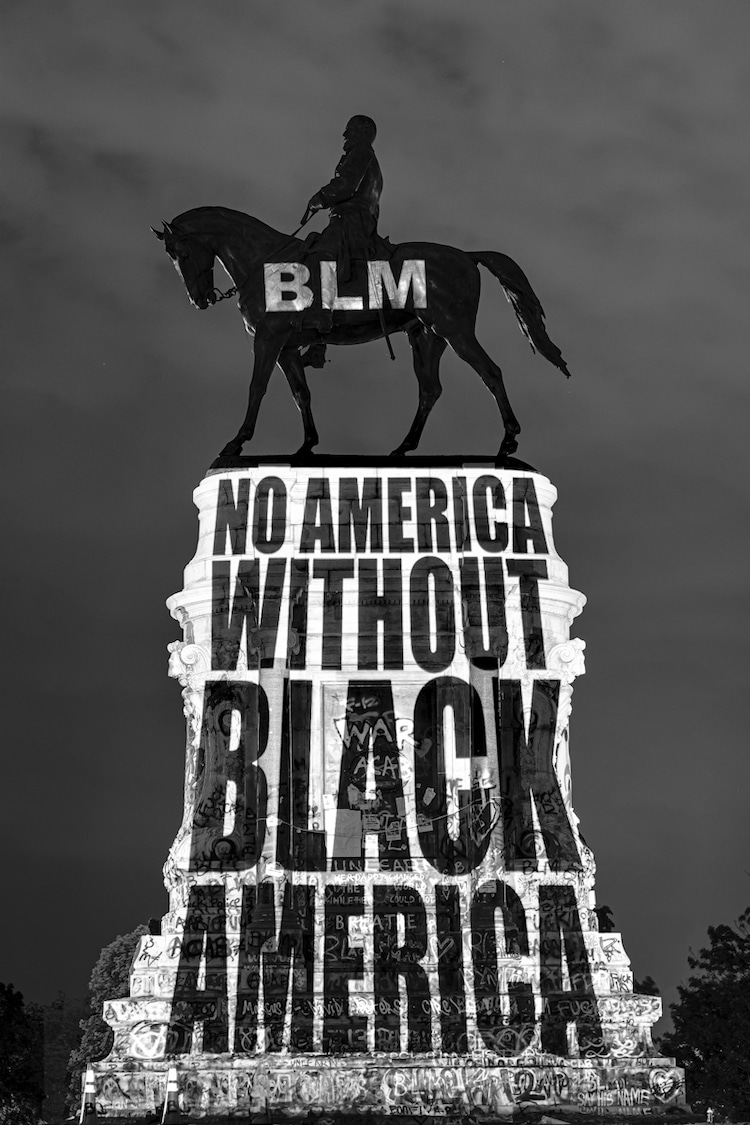 Can you first share a bit about your background in video art?

I originally learned how to animate in college to create educational films about sacred geometry. After working in the motion graphics industry for a few years, I learned how to mix video and create projection mapping. I found a band to take me on tour and transitioned my daily work into the live music industry. I made new connections and started creating projection mapping for art installations at larger music festivals and public events. COVID-19 has currently canceled all of the events I work for at least the rest of the year. 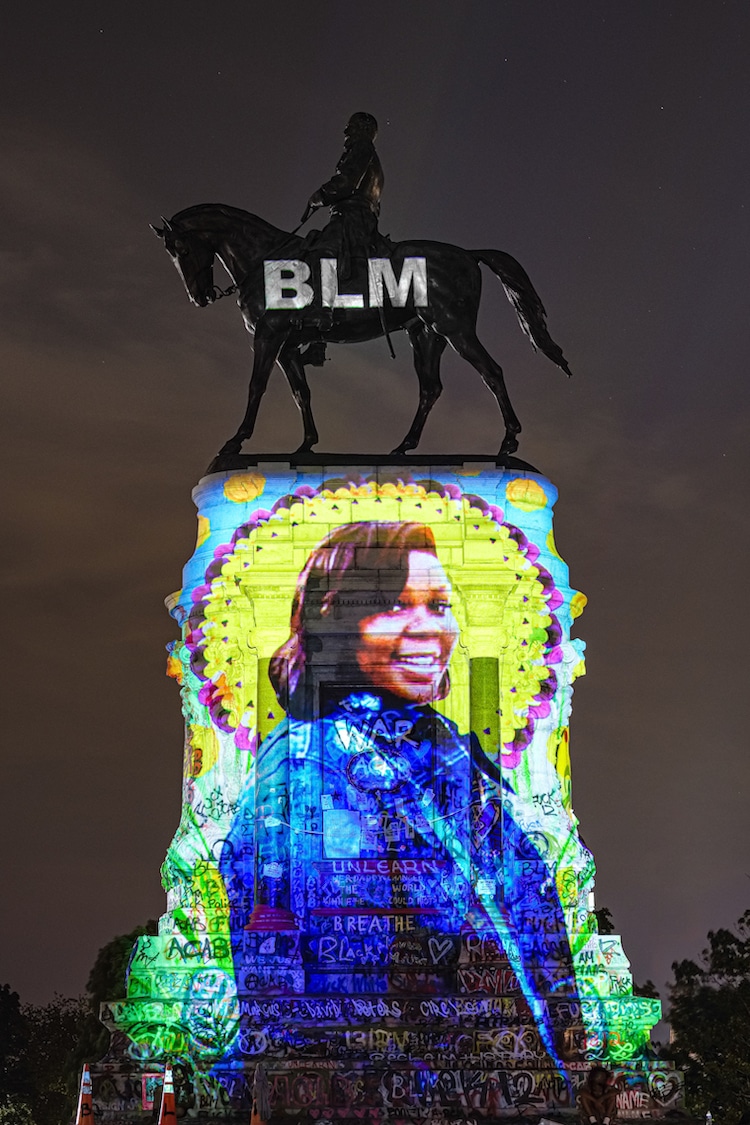 What inspired you to initially go out and do the first light projection?

After the initial uprising and boarding of business windows, I reached out to property owners to place projectors with BLM messages in windows around Richmond. I created two of these displays before lighting up the monument.

I witnessed a large number of peaceful protestors be tear-gassed and pepper-sprayed before the 8:00 pm curfew the previous night—literally saw more than one mother with small children running from the police. I had several close friends in the city be tear-gassed.

I was deeply disturbed by the video of George Floyd’s murder. Several police officers could have stopped this death, but instead, they didn’t do anything. I felt like not taking action at this moment with my skills and gear would be like the officers who didn’t stop Derek Chauvin from putting his knee on George Floyd’s neck for 8 minutes and 46 seconds. 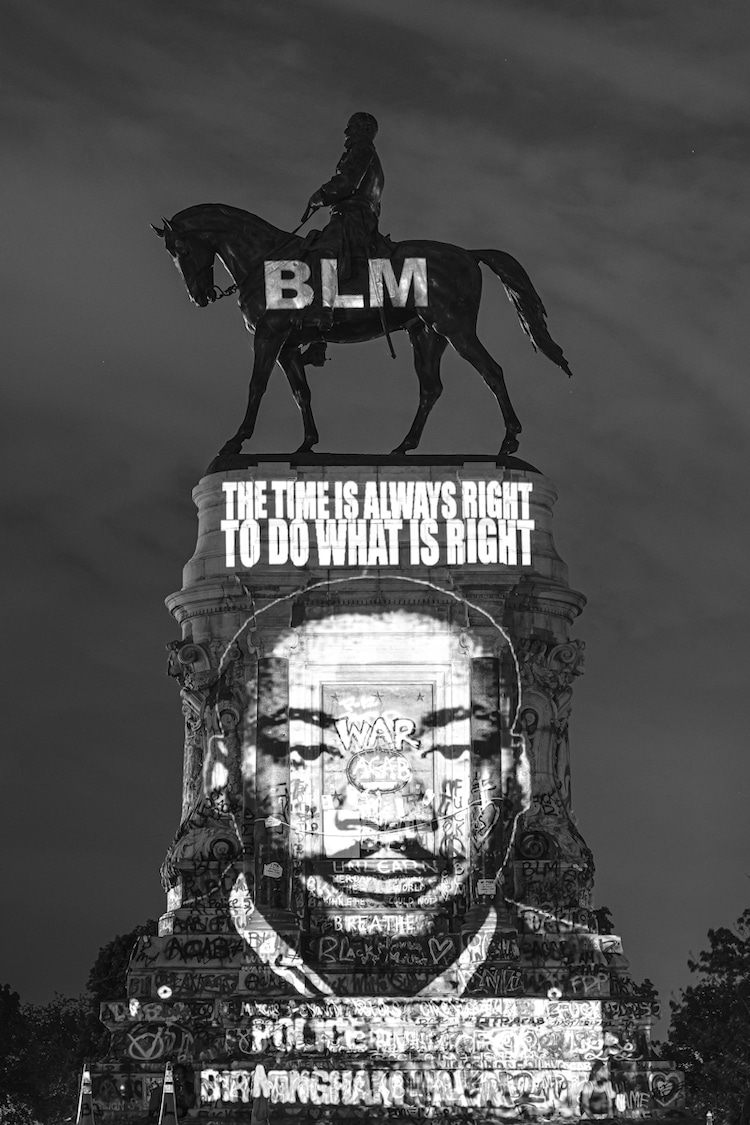 The Robert E. Lee monument is obviously one of the most famous and controversial Confederate monuments in the country. Were you concerned that there could be some pushback from the state about these installations?

Growing up in Richmond and seeing the monuments was always kind of strange. I remember talking to my Black friends in Richmond in high school about how they made them uncomfortable.

I was very unsure what the reaction of the police would be the first time we went out there. I smiled when they drove by us the first time and completely ignored us.

When we projected the first night, I had no idea this would go on for 40+ more days. We have made several adjustments to try and limit our footprint, noise, and be as respectful as we can to the neighborhood while still holding the space. For example, when we started, we were using a small generator. Since then we have switched to a 1000W inverter running off my car. On Juneteenth, one of the surrounding buildings turned on their giant floodlights, so we switched to the other side which was still plenty dark.

There was about a week where the state police were showing up to clear out the park after sundown. We moved to private property and projected from an off-center angle to not be in their way. We were able to keep the projection of Harriet Tubman on during the entire process of rubber bullets and tear gas. 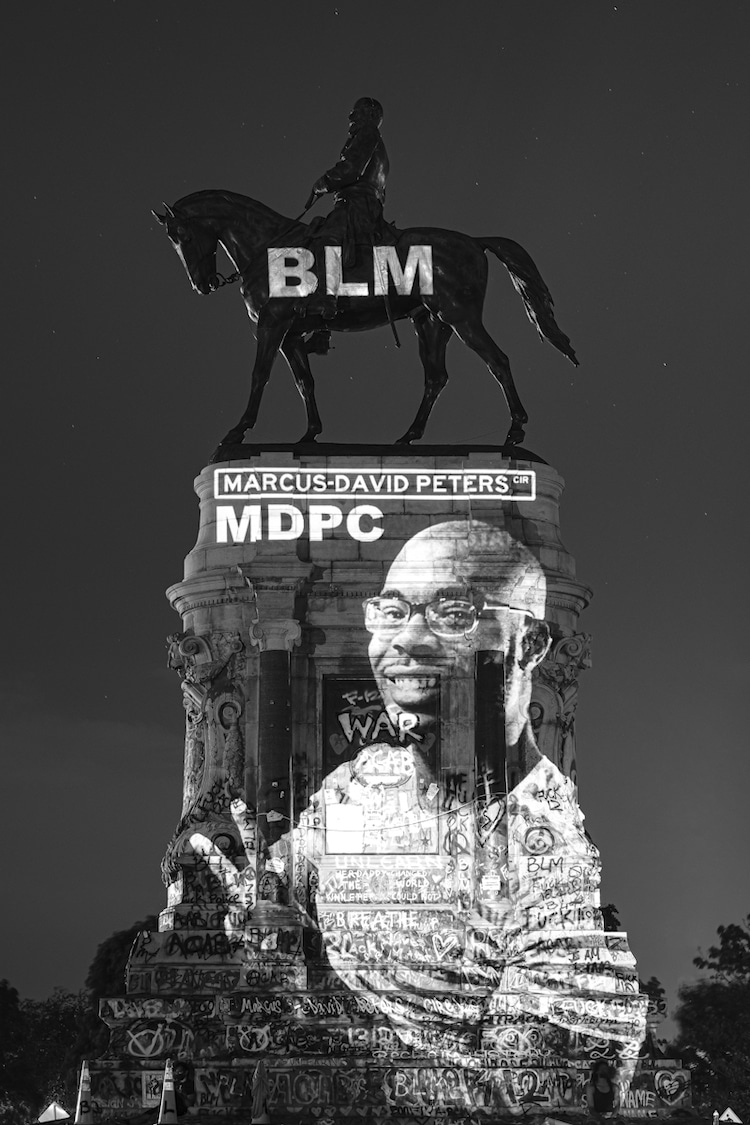 What has the reaction been to the work?

The reaction of the public around the monument was initially very sad and beautiful. For the first 10 to 14 days, the projections served only as a memorial to victims of police brutality, and the monument had space around it when it started its transformation.

Many Black people who have said they’ve never thought about stepping foot on the grounds of the Lee monument now feel that the space is reclaimed. I think everyone who wanted the monument re-contextualized was happy to see it in this way.

I received almost all positive feedback with face to face interactions out on the monument. The only real pushback I have received has been from trolls on the internet.

I was expecting a reaction, but not worldwide! 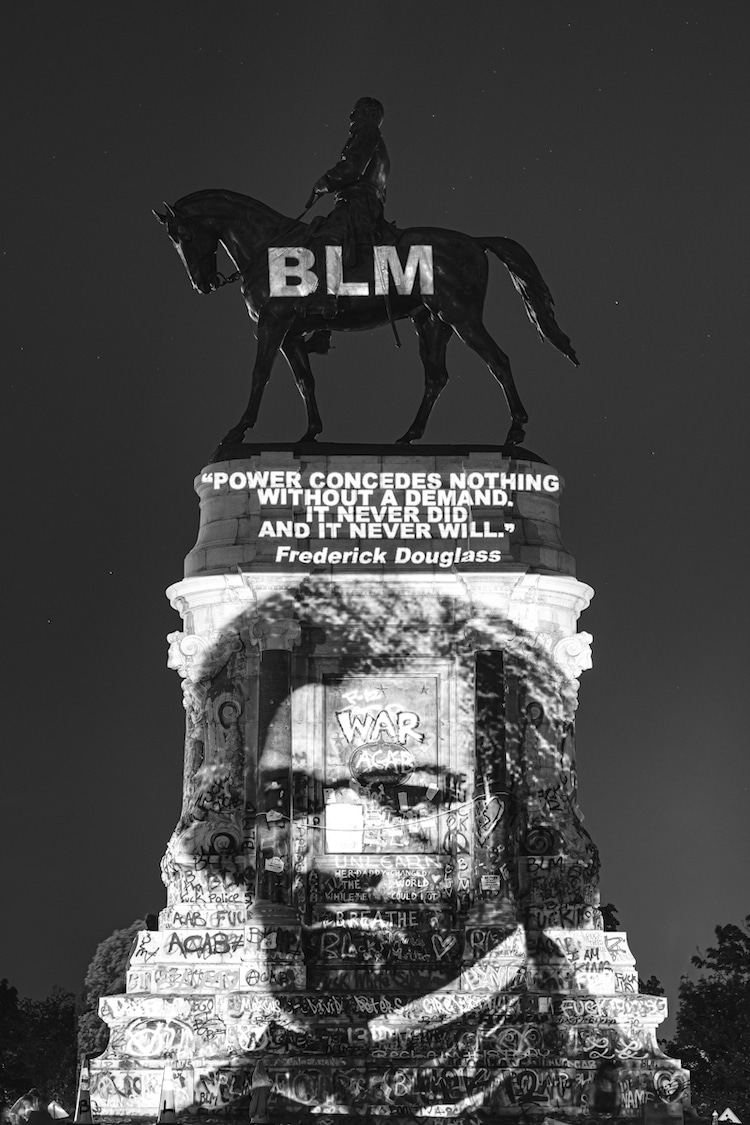 You don't typically do political art, so why did you feel compelled to get involved this time around?

How has the project grown since that initial evening?

We grew the theme. From what started off as a memorial to police violence has now become a theme of Black empowerment. I initially dragged my longtime friend Alex Criqui out there with me as an extra hand. As the project continued, he started curating and creating the content with me.

We plan on continuing to attend protests and work with the movement to create new appropriate content on a daily basis. I’d like to continue the projections until the statue is removed. 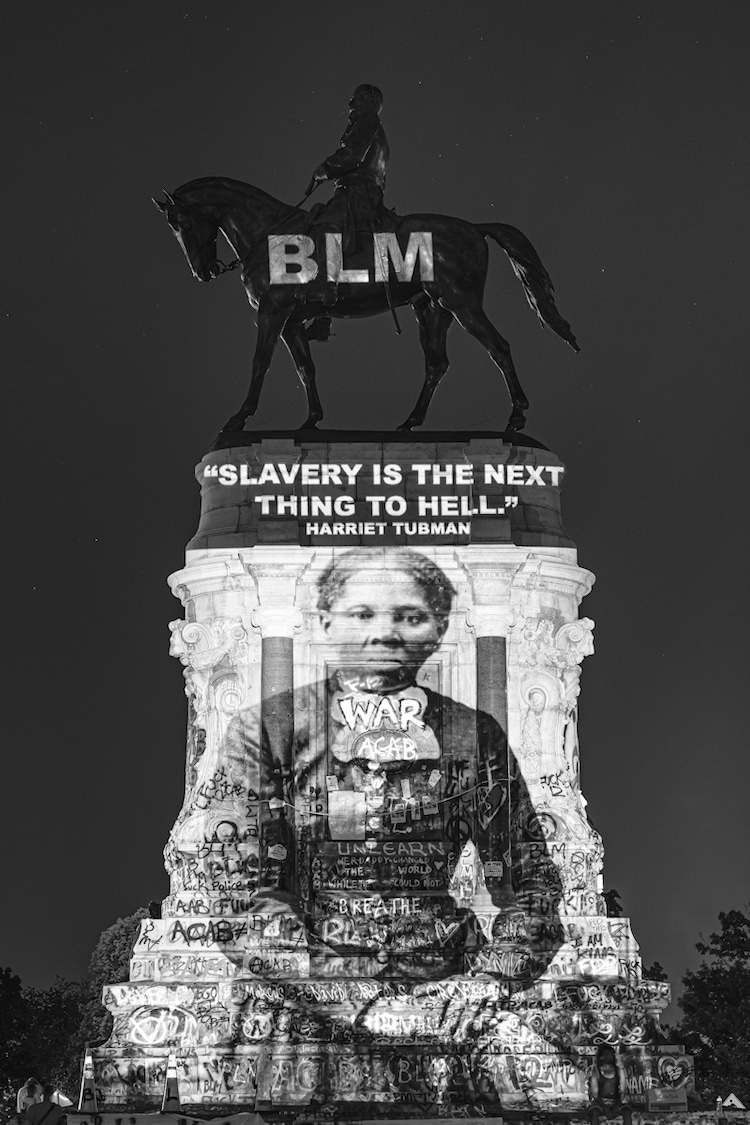 Can you tell us about the prints you have for sale and where the proceeds will go?

The initial run of prints, which has a picture of George Floyd with the words Black Lives Matter projected on the monument above it, will be going directly to the Black Live Matter organization.

We are launching more prints in the very near future. Each will benefit several different groups around Richmond and Virginia. We have a rainbow print benefiting Diversity, a group in Richmond who helps the LGBTQ+ community. A print of Frederick Douglass benefitting the organization SONG, which helps organize people for political actions relating to the protests around Virginia. A print of the fist of solidarity will benefit Mutual Aid, which is a disaster relief fund around Richmond VA. Lastly, a print of Harriet Tubman will be directed to a fund for a Unitarian church taking care of a woman named Abbie and two children, who are in the sanctuary of the Church which is protecting them from deportation by ICE (#HANDSOFFABBIE). 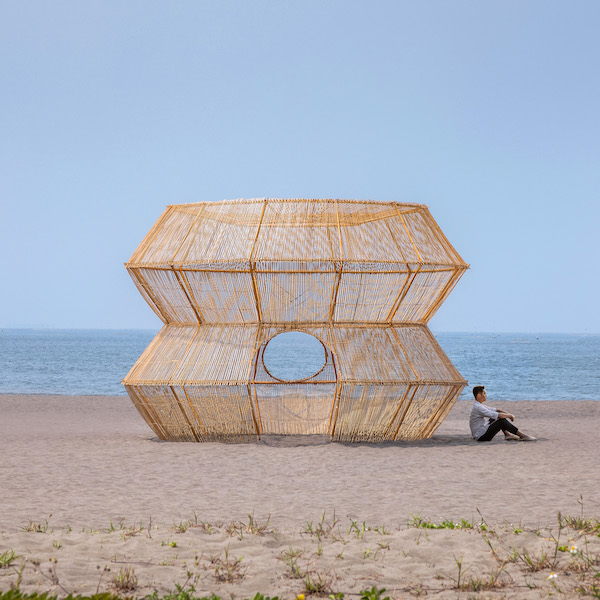