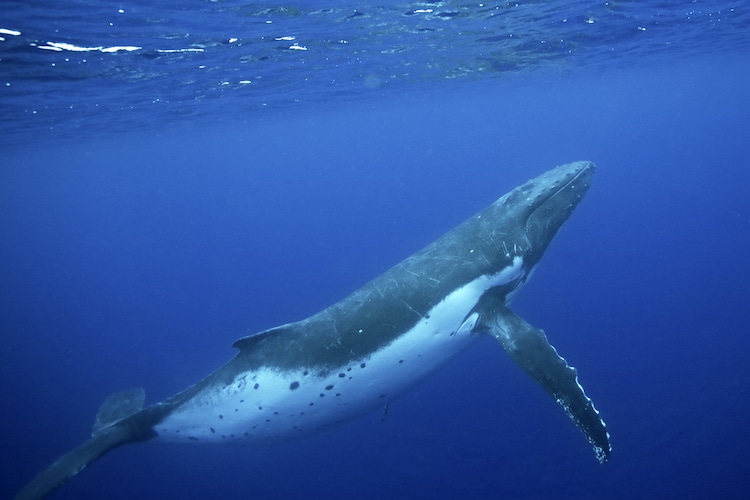 It's long been known that humpback whales use complex vocalizations to communicate with one another, but did you know just how far their songs could travel? A group of scientists spent years studying the evolution of male humpback whale songs off the coasts of Gabon and Madagascar. And the results of what they discovered about these populations separated by nearly 3,000 miles is quite surprising.

Composed of single unit sounds like clicks, grunts, groans, and snorts, the songs that male humpback whales sing take place more frequently during the mating season. Though researchers haven't completely decoded these songs, there are theories that they're a way for males to either “flirt” with females or to make other males aware of their territory. In a new study published in Royal Society Open Science, Dr. Melinda Rekdahl of the Wildlife Conservation Society led a team that spent years examining different whale populations on opposite sides of Africa.

What they discovered is that, notwithstanding the distance between them, the humpback whales appear to be remixing each other's songs. While the songs vary from year to year, most of the males seem to be riffing off one another, singing variations of the same type. As the African continent provides a land barrier to these populations during the breeding season, researchers have hypothesized that the exchanges of information occur when the whales migrate toward Antarctica for feeding.

Here, the male humpback whales are more likely to come across other populations who sing differently. They then bring that information back with them as they move back to their breeding grounds. It's almost as if populations pick up on new trends and bring those ideas home to make an even more impressive showing. This discovery, which has also been noted between humpback whale populations in west and east Australia, gives interesting clues about the connectivity between different populations of migratory species.

As these humpback whales move within the ocean, their acquisition of new songs shows just how connected different populations can be, even if they're separated by an entire continent for a good part of the year. It's unclear if this trend bleeds over to the female population, as only male humpback whales were tracked in this particular study. In the future, the researchers would like to incorporate a larger sample size, pulling in Brazilian male humpback whales, as well as other Southern Hemisphere populations to see just how far these “remixes” travel.

Fascinated by whales? Share
Like My Modern Met on Facebook
Get Our Weekly Newsletter
Become a
My Modern Met Member
As a member, you'll join us in our effort to support the arts.
Become a Member
Explore member benefits