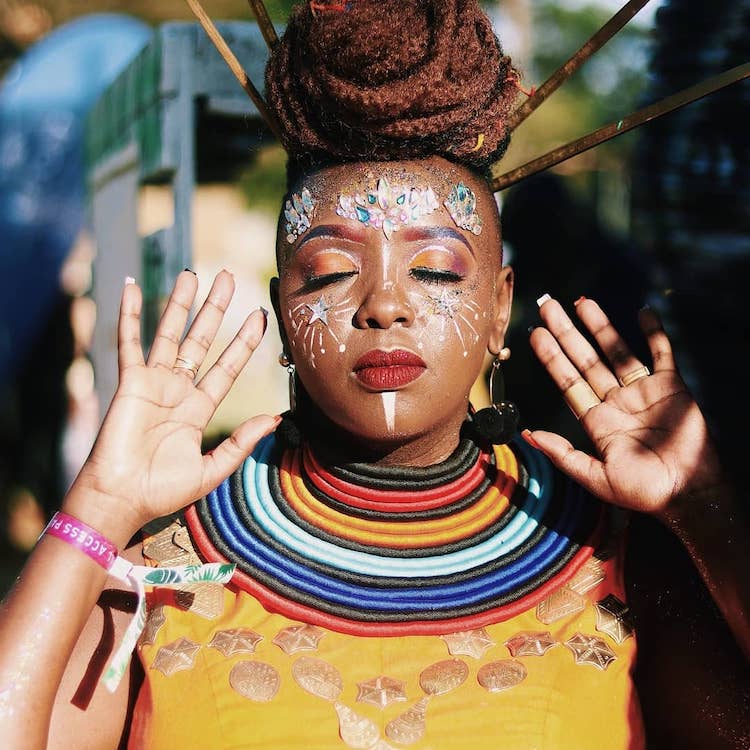 Kenyan musician Muthoni Drummer Queen is a cultural alchemist. While she excels in creating songs that are a unique blend of genres—including reggae, blues, and African drums—Muthoni sees the bigger picture and imagines a restructuring of the music industry (and beyond) in her home country and brings together different creative fields to make it happen. This has led her to create festivals that celebrate the likes of Kenyan performers, filmmakers, and photographers.

Muthoni uses her voice to spread a message of female empowerment. Her latest single titled “POWER” is an anthem for the women of Kenya—as well as the rest of the world—honoring those that paved the way towards equality. The song also comments on the notion that women are the root of evil in the world and inferior to men. “In my culture (Kikuyu), a woman is not a subordinate to a man,” Muthoni tells My Modern Met, “and is actually revered as the creator and the truth.”

Muthoni shared more of her ideas in an inspiring TED Talk called “Creativity Builds Nations” that she gave in 2019. She asserts that creativity can build an identity for Kenya—one that it does not have now but desperately needs. “We cannot build what we do not truly love,” she said in her speech. “And we cannot love until we love ourselves.”

We were honored to speak to Muthoni about her music, her vision for Kenya, and how she has circumvented traditional routes of music to create a path that is all her own. Scroll down for our exclusive interview.

What is your background?

So, my first love is music. Singing it, dancing to it, making it. I’ve sung and performed since I was a kid. I hoped to do it for real as an adult, but my parents couldn’t see it as a viable career option given the situation in Kenya when growing up and the general volatility around a career in the arts. So I developed my skill set through the school choir, theatre, and debate clubs.

How did you become connected with art, music, and overall creativity?

Fast forward to when I was 21 and a close friend proposed that we create a duet, write our new songs, and stage our own showcase. Putting that together was the greatest creative and logistical challenge I had ever experienced and it reminded me that I really wanted to create music and perform as so with that re-ignited, and here we are today.

For those unfamiliar with your music, how would you describe it?

It's a combination of hip-hop, reggae/dance hall, and soul/blues against African drums. Afro-Diasporic global cool! It's dope AF!

“POWER” is your latest single as an ode to the courage and vision of many women. Can you tell us about the other themes you touch on in that song, as well as how it connects with the music video?

“POWER” is really taking a minute to celebrate all the incredible sacrifices and contributions women have made to the development of Kenya, Africa, and the world at large. It’s maddening to me that women's contributions are often undervalued, under recorded, and often just erased!

So apart from re-enacting a really powerful moment in Kenya’s history in 1992—when mothers of political prisoners who had been peacefully demanding the release of their sons and daughters stripped naked in a confrontation with the police—I also present female entrepreneurship and friendship as a real contribution Kenyan women have made, particularly in male-dominated spaces such as the public transport system (which is really private but for the public). I also wanted to mock this silly notion that Judeo-Christianity invented about how women are the root cause of all evil in the world, and the idea of the female temptress (Eve) because in my culture (Kikuyu) a woman is not a subordinate to man, and is actually revered as the creator and the truth. 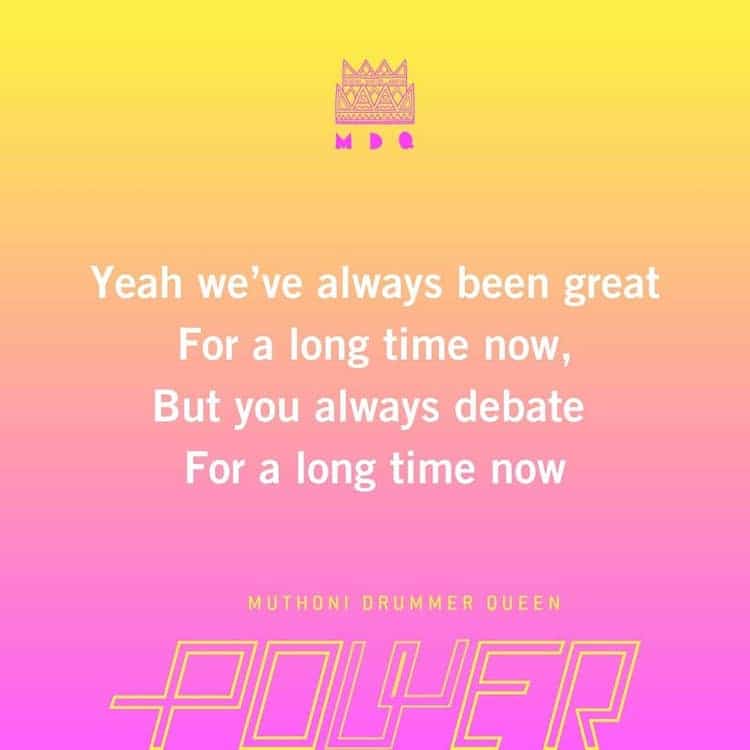 Making music is just one part of what you do—you've also established festivals. What inspired you to do this?

A few years into the very early stages of my music career, I got fed up with producers telling me that I was not Kenyan enough and that Kenyans would never accept a Kenyan artist like me. So, I decided to stop trying to record music with producers who didn’t share my vibes and instead focus on a regular showcase where I could directly share the music with my fans. It grew and for a while, everything seemed ok. But honestly, there was a limit to how many times I changed my repertoire, the venue was a tiny dive bar so we really couldn't significantly grow the audience and we were having money issues with the owner of the bar.

At the same time, there were a number of artists who I considered really great and who, just like me, had been “locked out” of the system. I figured I could make a music festival to give a platform to all these artists and myself, and that we could cross-pollinate audiences while also earning a living through performance fees. I figured that Nairobi (the capital city of Kenya) required a regular dose of great live music and that a festival would probably work if we sold the idea of carrying your picnic and wine and your best self, and we will bring the best live music, and together we will make the best time. Also, I was desperate enough to try something different. I’m happy that I did and grateful for my awesome friends who helped me think through it and execute it. 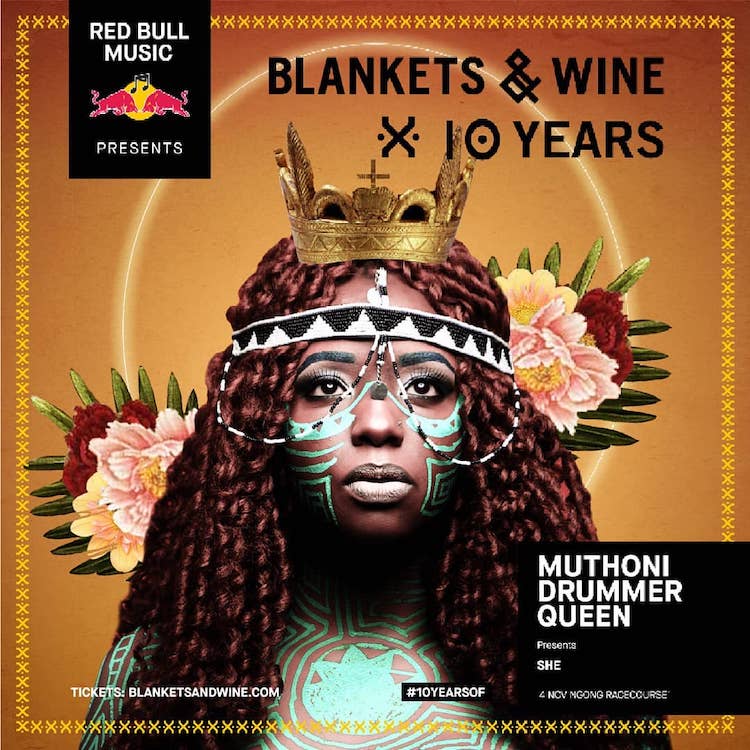 How have you seen them grow over the years?

Our first festival, Blankets & Wine, is now in its 12th year in Kenya, We also run it in Uganda and Rwanda and have ambitions to export it to the African diaspora. Our second festival, Africa Nouveau, is a multidisciplinary arts and music festival in its fourth year (well, before the coronavirus) congregating creators, curators and fans of African cool from all over Africa and its diaspora for a weekend of music, fashion, art installations, virtual reality, photography exhibitions, and film screenings. We are excited to grow this into an out-of-town, camping festival experience.

What compels you to take on so many things and work in so many different ways?

I feel the urgency to solve as many things as I can connect to music. We had a really thriving scene in the 60s, 70s, and early 80s, then everything fell apart. Then, we had a re-awakening in the late 90s/early 2000s but just like before, there were no structural changes to how music operates, so years later, we have to build the infrastructure, the expertise, and bring in the right investments to actually build a music industry. But the music industry is literally just the start, the game plan here is to really develop the creative economy as a true manufacturing industry and a pillar for Kenya’s economic growth.

You have the unique ability to pair seemingly disparate people, ideas, etc., and involve them in something spectacular—a “stew or sauce” as you say. How do you do this?

Cultural alchemy is my thing! I love the whole spectrum of the creative arts, and I genuinely stan for the creatives coming from Kenya and Africa as a whole. I also fundamentally believe that the artist always knows, and if he/she doesn’t know, then the critical work is stillness so that the artist can hear their inner guidance. I do a lot of research to find successful models/best practice models so usually going in, I’m pretty confident about the chances for success.

You gave an inspiring TED talk about how vital the creative industry is to the nation-building of Kenya. What are some of the ways you've seen musicians, actors, artists, and others help Kenya showcase the diversity of Kenyan culture?

I think the film industry has been really instrumental in telling our stories in our language and presenting ourselves to ourselves. I think this one has been very compelling.

In terms of film, what are some of the movies you feel tell Kenyan stories and do it well?

Some favorite films from Kenya include Nairobi HalfLife (phenomenal!), SupaModo (super good), Kati Kati (very very good), and Pumzi (science fiction!). All of these are but a shortlist of films creating stories and images in our likeness and helping us—as well as those interacting with us to understand better who we are.

I’m excited to become a better artist during these coronavirus #stayathome times! We have a brand new album we are itching to drop so expect some new singles and videos from us. Our festival has figured out how to do one-two man shows for streaming so it’s exciting to see how we get through this pandemic as a business, and I’m starting to really flesh out some content creation ideas I’ve been wanting to start. I suppose I’m the eternal optimist, but I’m really looking forward to a collapse of the way the world works and its replacement with a more humane and just system.