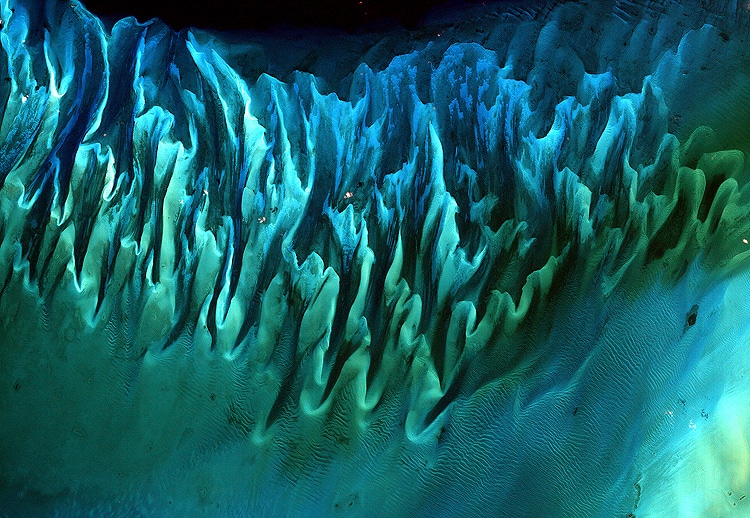 “Ocean Sand, Bahamas” Overall Winner.
Though the above image may resemble a new age painting straight out of an art gallery in Venice Beach, California, it is in fact a satellite image of the sands and seaweed in the Bahamas. The image was taken by the Enhanced Thematic Mapper plus (ETM+) instrument aboard the Landsat 7 satellite. Tides and ocean currents in the Bahamas sculpted the sand and seaweed beds into these multicolored, fluted patterns in much the same way that winds sculpted the vast sand dunes in the Sahara Desert. (Photo: Serge Andrefouet, University of South Florida)

March Madness might not have taken place this year, but there's another bracket-style tournament that deserves some attention. NASA Earth Observatory pitted some of its best photographs against each other for Tournament Earth. After five rounds of competition, the public voted for a surreal abstract photo as the winner.

Taken in 2001 by the Enhanced Thematic Mapper Plus, which uses a multispectral scanning radiometer to take high-resolution images of the Earth's surface, the evocative image shows sand and seaweed in the Bahamas. The fluted patterns in the sand created by the ocean tides only enhance the artistry of the photograph. One could almost envision it in a fine art gallery, which proves that the natural world is full of surprises.

The photo of the Bahamas won 66% of the final vote, beating out another spectacular photograph taken by astronauts aboard the ISS (International Space Station). They had a unique view of the Raikoke Volcano as it erupted for the first time in 95 years. Located on the Kuril Islands, an archipelago that separates the Sea of Okhotsk from the north Pacific Ocean, the volcano's plume of ash and gas slowly rises up like a column before it spreads across the environment.

Other photographs to celebrate Earth include a barely visible view of our planet from Saturn, a look at the sand dunes of the Namib Desert, and a satellite image that helps us understand how Alaska's fast-moving Columbia Glacier is retreating. All of the photographs are an incredible celebration of Earth.

More than 56,000 people voted in the contest for their favorites, which were culled from NASA Earth Observatory's Image of the Day. So if you're looking for more outstanding images of the Earth, tune in for their daily posts and get ready to vote in next year's tournament.

NASA Earth Observatory's Tournament Earth is a bracket-style contest to decide the best image of our planet. 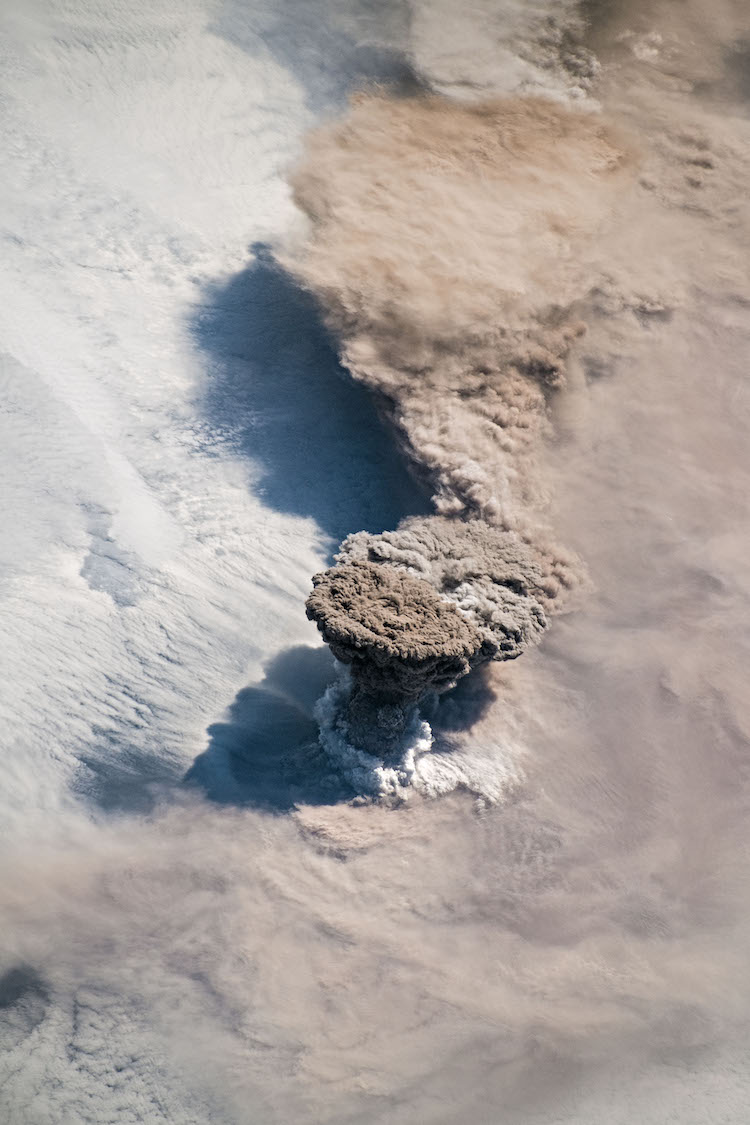 “Raikoke Erupts” Runner Up (Winner, Sea and Sky)
Unlike some of its perpetually active neighbors on the Kamchatka Peninsula, Raikoke Volcano on the Kuril Islands rarely erupts. The small, oval-shaped island most recently exploded in 1924 and in 1778.
The dormant period ended around 4:00 a.m. local time on June 22, 2019, when a vast plume of ash and volcanic gases shot up from its 700-meter-wide crater. Several satellites—as well as astronauts on the International Space Station—observed as a thick plume rose and then streamed east as it was pulled into the circulation of a storm in the North Pacific. (Photo: NASA Earth Observatory/Joshua Stevens) 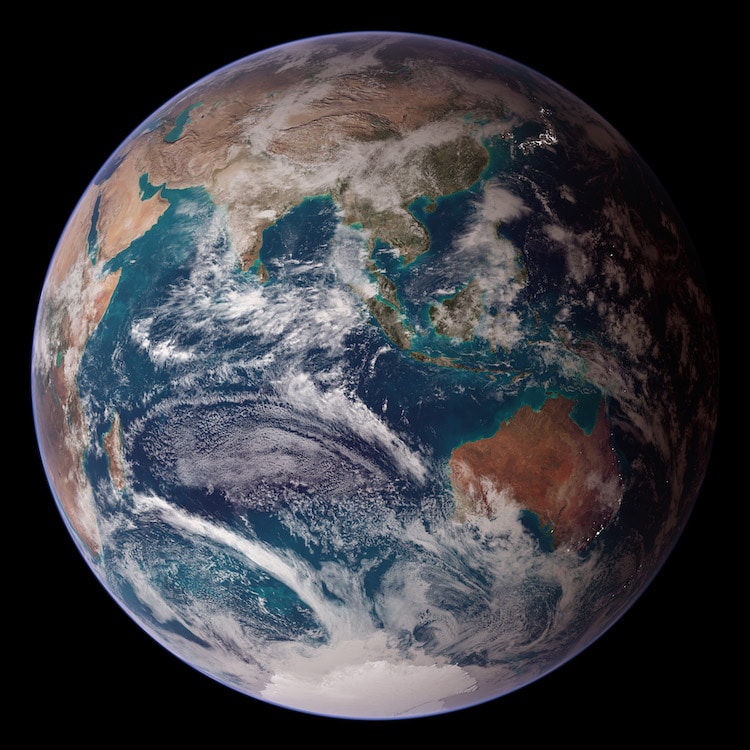 “Twin Blue Marbles” Seminfinalist (Winner, Home Planet).
A day’s clouds. The shape and texture of the land. The living ocean. City lights as a beacon of human presence across the globe. This amazingly beautiful view of Earth from space is a fusion of science and art, a showcase for the remote-sensing technology that makes such views possible, and a testament to the passion and creativity of the scientists who devote their careers to understanding how land, ocean, and atmosphere—even life itself—interact to generate Earth’s unique (as far as we know!) life-sustaining environment.
Drawing on data from multiple satellite missions (not all collected at the same time), a team of NASA scientists and graphic artists created layers of global data for everything from the land surface, to polar sea ice, to the light reflected by the chlorophyll in the billions of microscopic plants that grow in the ocean. They wrapped these layers around a globe, set it against a black background, and simulated the hazy edge of the Earth’s atmosphere (the limb) that appears in astronaut photography of the Earth. (Photo: Reto Stöckli, based on data from NASA and NOAA)

“A View of Earth from Saturn” Quarterfinalist, Past Winners.
This beautiful image of Saturn and its rings looks more like an artist’s creation than a real image, but in fact, the image is a composite (layered image) made from 165 images taken by the wide-angle camera on the Cassini spacecraft over nearly three hours on September 15, 2006. Scientists created the color in the image by digitally compositing ultraviolet, infrared, and clear-filter images and then adjusting the final image to resemble natural color. (A clear filter is one that allows in all the wavelengths of light the sensor is capable of detecting.) The bottom image is a closeup view of the upper left quadrant of the rings, through which Earth is visible in the far, far distance. (Photo: CICLOPS team) 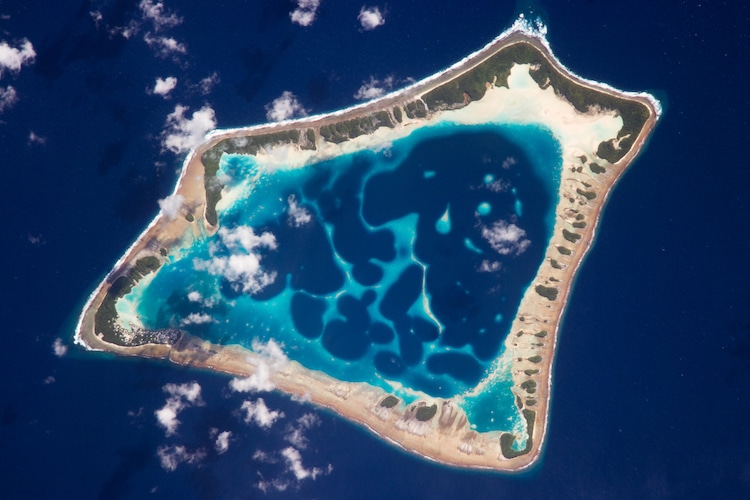 “Atafu Atoll, Tokelau” Quarterfinalist, Sea and Sky.
At roughly eight kilometers wide, Atafu Atoll is the smallest of three atolls and one island (Nukunonu and Fakaofo Atolls to the southeast and Swains Island to the south are not shown) comprising the Tokelau Islands group located in the southern Pacific Ocean. The political entity of Tokelau is currently a territory of New Zealand.
The primary settlement on Atafu is a village located at the northwestern corner of the atoll—indicated by an area of light gray dots in this astronaut photograph. The typical ring shape of the atoll is the result of coral reefs building up around a former volcanic island. Over geologic time, the central volcano has subsided beneath the water surface, leaving the fringing reefs and a central lagoon that contains submerged coral reefs. (Photo: Expedition 18 Crew) 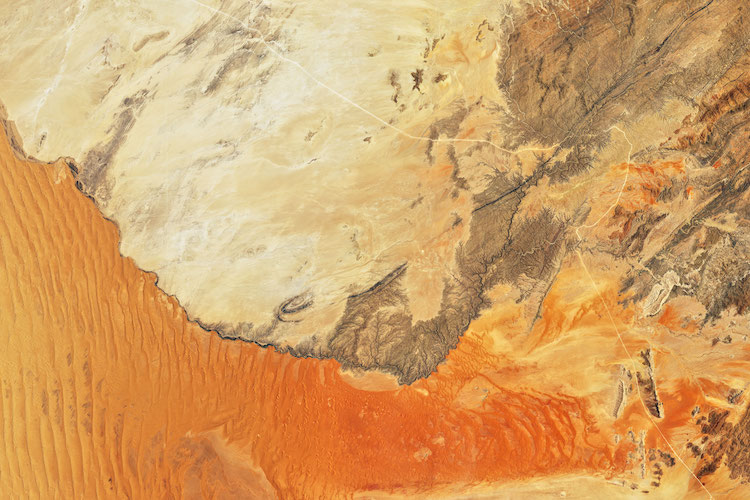 “Where the Dunes End” Semifinalist, Ice and Land.
Mountains of sand, some as tall as 300 meters (1000 feet), reach from the floor of Africa’s Namib Desert toward the sky. Driven by wind, these dunes march across the desert, bordered to the west by the Atlantic Ocean and in other directions by solid, rocky land.
The abrupt transition from sand to land is visible in these images, acquired on November 13, 2019, by the Operational Land Imager (OLI) on Landsat 8. They show the northern extent of the Namib Sand Sea—a field of sand dunes spanning more than 3 million hectares (more than 10,000 square miles) within the Namib-Naukluft Park, which was named a UNESCO World Heritage site in 2013. Sand appears red, painted by a layer of iron oxide. (Photo: Joshua Stevens/NASA Earth Observatory) 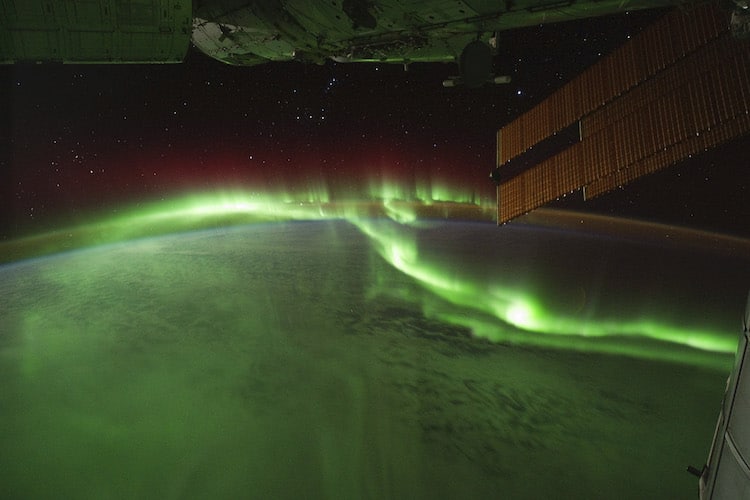 “Fire in the Sky and on the Ground” Quarterfinalist, Home Planet.
Astronauts on the International Space Station (ISS) used a digital camera to capture several hundred photographs of the aurora australis, or “southern lights,” while passing over the Indian Ocean on September 17, 2011. If you click on the movie linked above, you can see the flowing ribbons and rays below as the ISS passed from south of Madagascar to just north of Australia between 17:22 and 17:45 Universal Time. Solar panels and other sections of the ISS fill some of the upper right side of the photograph. (Photo: Expedition 29 Crew) 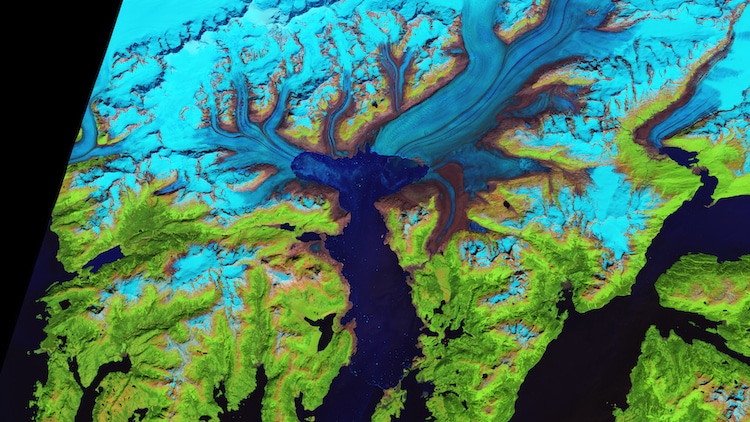 “Retreat of the Columbia Glacier” Quarterfinalist, Ice and Sand.
Scientists have long studied Alaska's fast-moving Columbia Glacier, a tidewater glacier that descends through the Chugach Mountains into Prince William Sound. Yet the river of ice continues to deliver new surprises.
When British explorers first surveyed the glacier in 1794, its nose extended to the northern edge of Heather Island, near the mouth of Columbia Bay. The glacier held that position until 1980, when it began a rapid retreat. (Photo: NASA Earth Observatory/Jesse Allen)