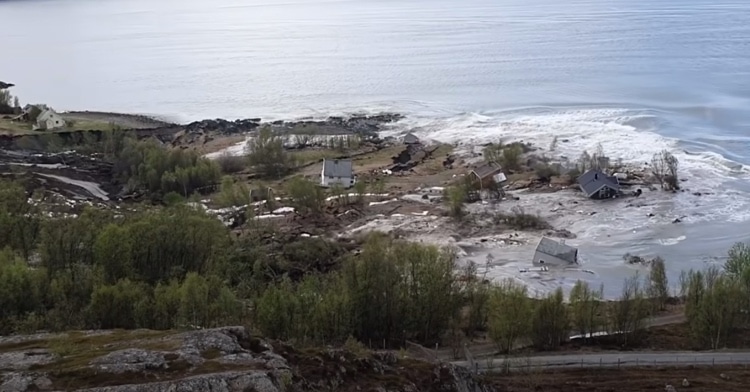 A terrifying scene along the northern coast of Norway was captured on film, as a 2,000-foot-wide landslide swept eight houses into the sea. The two-minute video shows as the Earth breaks apart and slides into the water, bringing the homes along with it. Luckily, no one was hurt in the incident.

The landslide took place around 3:45 pm on Wednesday, June 3,  and police were immediately called onto the scene. One person was evacuated from their nearby home due to continued instability in the area. And one dog managed to escape unscathed by swimming his way to shore, where he was later picked up by a rescue team.

The on-duty rescue team surveyed the area as best they could for about 3 hours before determining that everyone was accounted for. Thankfully, the homes that were destroyed were primarily used for vacations and so they were unoccupied at the time. Of course, the story could have been much different if the mudslide occurred over the weekend or during summer vacation.

You might be wondering why do landslides happen? They're caused by disturbances in the natural stability of a slope,  often occurring after heavy rain, long periods of drought, earthquakes, or volcanic eruptions. In this case, the cause was probably due to excess water infiltrating the steep slopes of the mountains that stretch into the sea. This can be caused by snow melting and permeating the soil. As vegetation on the slopes itself is sparse, it makes it easier for landslides to take place. In fact, for several hours afterward, smaller landslides continued in the area and local authorities warned that more could take place in the coming days.

An enormous landslide in northern Norway washed away eight homes.

Thankfully, no one was hurt and the one dog on-site managed to swim away until rescuers found him.

The only victim caught up in the enormous mudslide in Norway was this dog, who swam to shore and is fine https://t.co/zHmQv6H9Ts pic.twitter.com/EiDE9BOnVx

Giant Boulder Rolls Downhill and Crashes Through Barn. Incredibly, Another One Stops Inches Short of Home