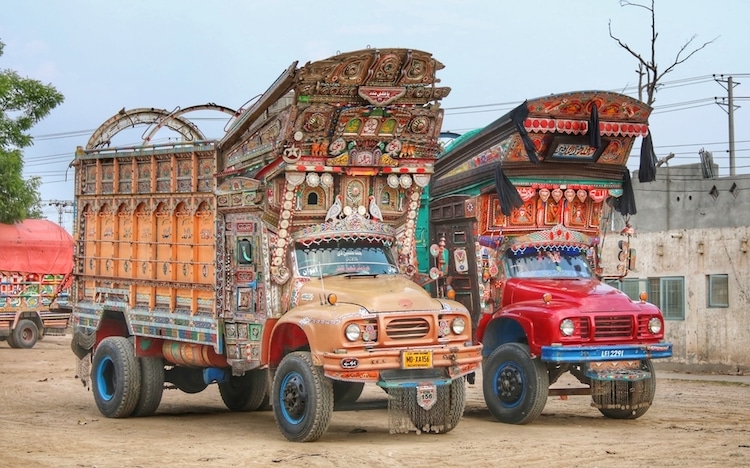 If you've spent any time in South Asia, specifically Pakistan, Afganistan, and India, you've surely seen colorful, ornate trucks rumbling down roads and highways. In these countries, especially Pakistan, truck art is more than just cultural expression, it's also a deeply rooted tradition that can cause a business boom for drivers. So what is the history behind these movings pieces of art? And what is the true meaning of the bold and beautiful designs that engulf these vehicles?

In Pakistan, truck art has origins dating back to the 1920s, when Bedford trucks imported from England invaded the country's streets. They were fitted with large wooden prows on top of the truck bed. Known as a taj, or crown, the ornate prow was also accompanied by decorative bumpers and wood paneling along the cabin. In the late 1940s, when trucks began long-haul journeys to deliver goods, each company designed a logo so that illiterate people would understand who owned the truck.

Over time, these logos became increasingly ornate. “They were badges of competition,” explains Durriya Kazi, head of the department of visual studies at the University of Karachi and an expert in truck art. “And the more flamboyant the design, the better business became.” In the 1950s, Karachi became a hub of truck art—a title it still holds today—when Hajji Hussain, an artist known for his elaborate palace frescoes, settled in town. Lacking palaces to paint, he turned to decorating trucks, and his ornate, floral style pushed the genre forward.

And while truck painting has taken hold in other South Asian countries, as well as South America and Japan, in Pakistan the art form is at a whole other level. An entire industry unto itself, in Karachi alone 50,000 people are employed in workshops dedicated to the craft, with truck drivers willing to spend big money to ensure their truck is better than the rest. While the bright colors and ornate decorations are certainly beautiful, the drivers also view it as good return on their investment.

“Our clients want to make their trucks stand out,” shares Pakistani artist Haider Ali. “When people look to hire a truck, they feel that if it looks fancy and newly painted, then it’s probably in better condition and they trust it more.” Also known as jingle trucks thanks to the bells festooning the exterior, drivers can easily spend up to $2,500 for a basic paint job, which is two years' salary. And often, they'll come back for touchups every few years to keep things fresh.

Kazi also sees truck art as more than a business expense; it's also a ritual that harkens back to the Sufi tradition of painting shrines to curry religious favor. “Truckers don’t even spend so much money on their own houses,” she shares. “I remember one driver who told me that he put his life and livelihood into the truck. If he didn’t honor it with the proper paint job, he would feel he was being ungrateful.”

In Pakistan, truck drivers can spend up to two years' salary decorating their vehicles with colorful and ornate art. 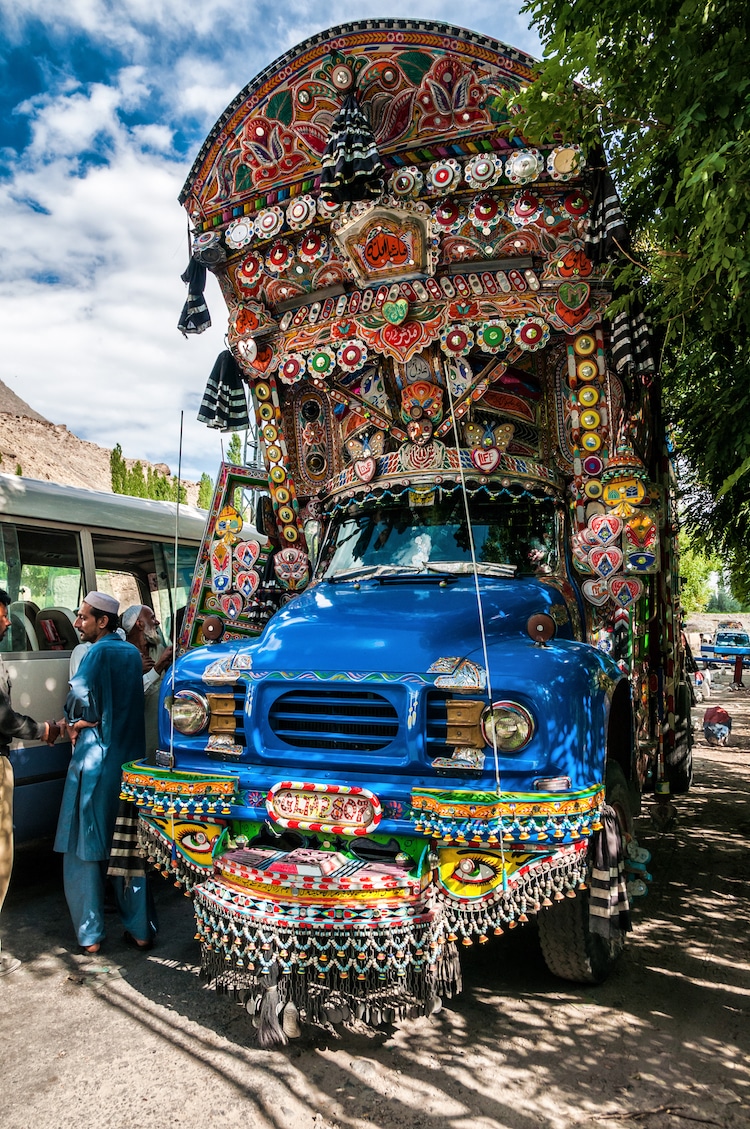 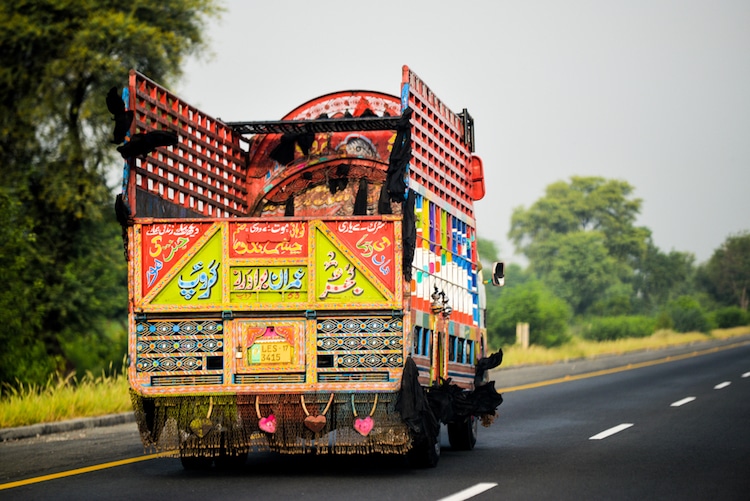 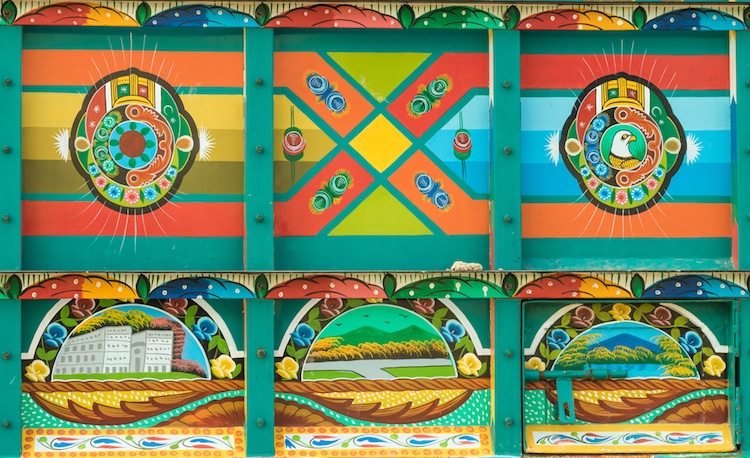 They're also known as jingle trucks, a nickname given by American military in Afganistan, thanks to bells strewn across the bumpers. 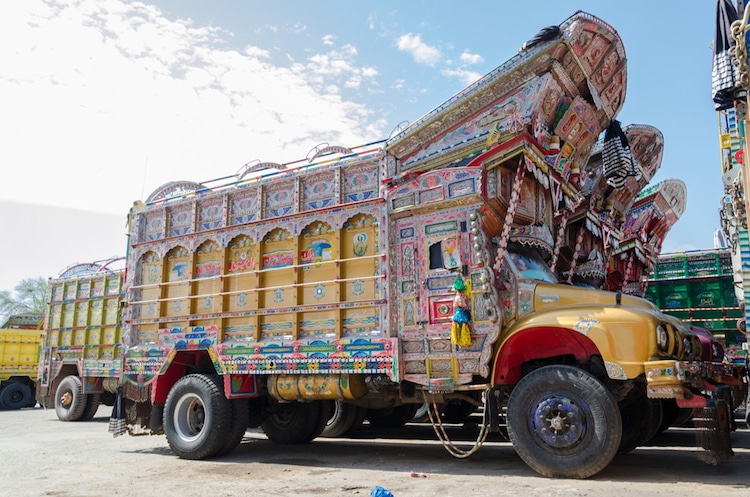 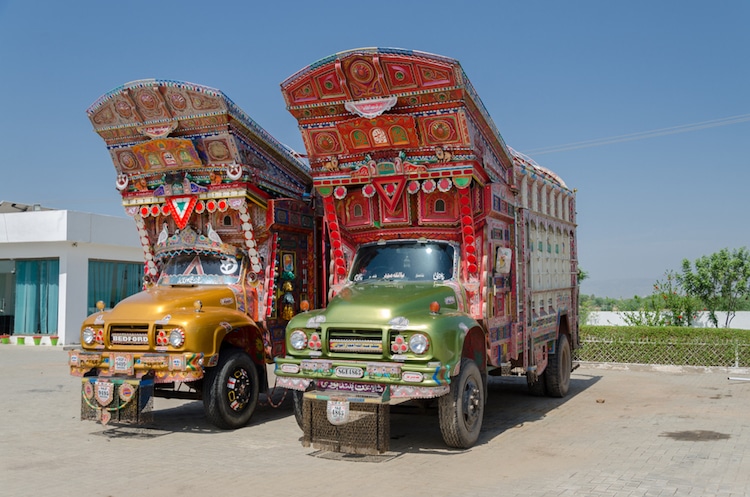 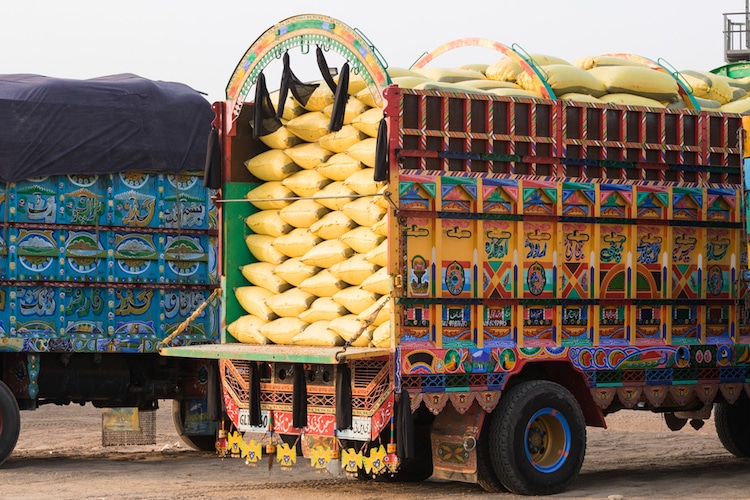 The tradition dates back to the 1920s, when British Bedford trucks were imported to Pakistan and modified with large wooden crowns over the cab. 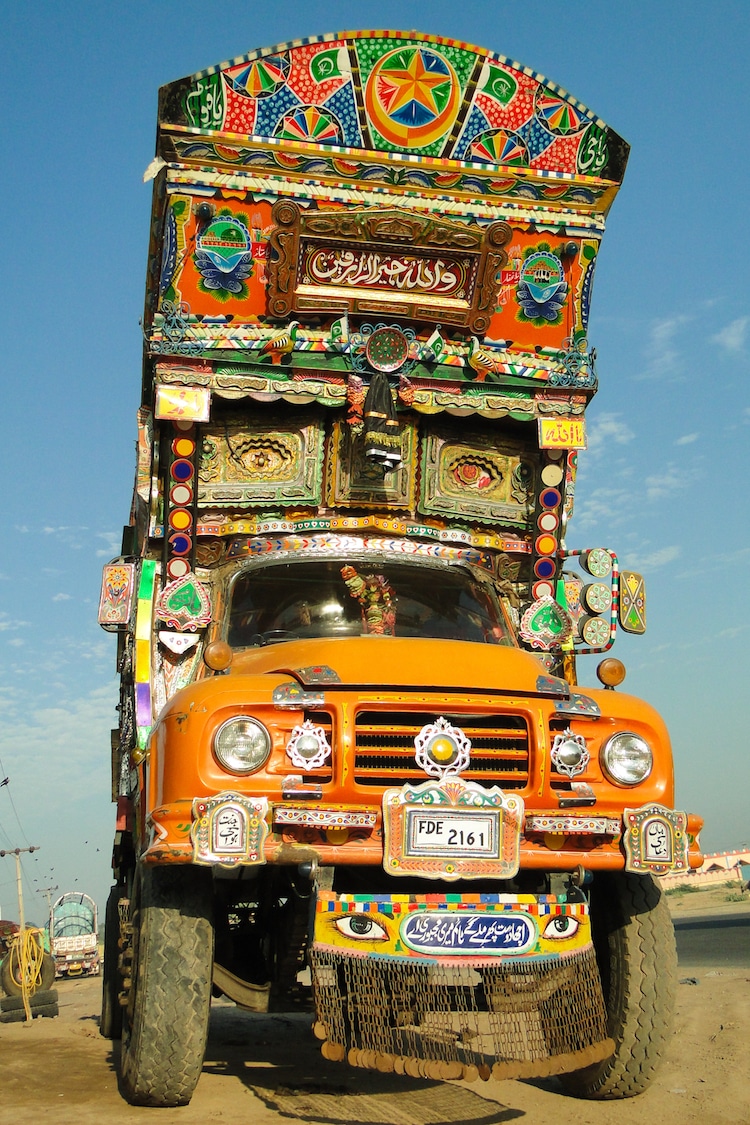 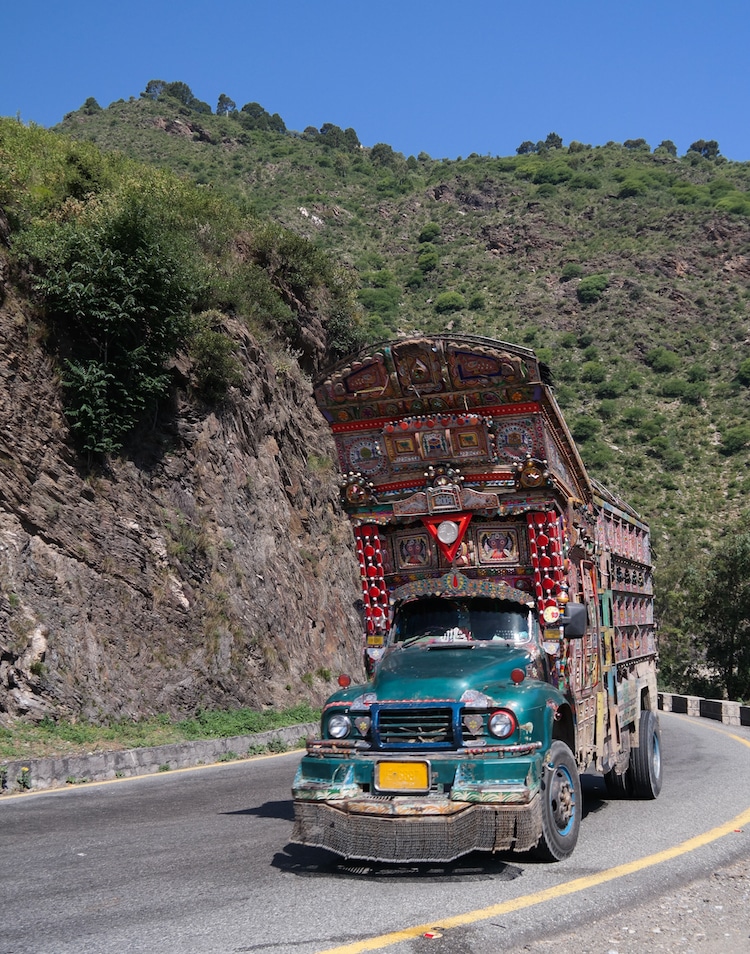 The art is seen as a business investment, as potential clients are more likely to hire a truck that's beautifully painted. 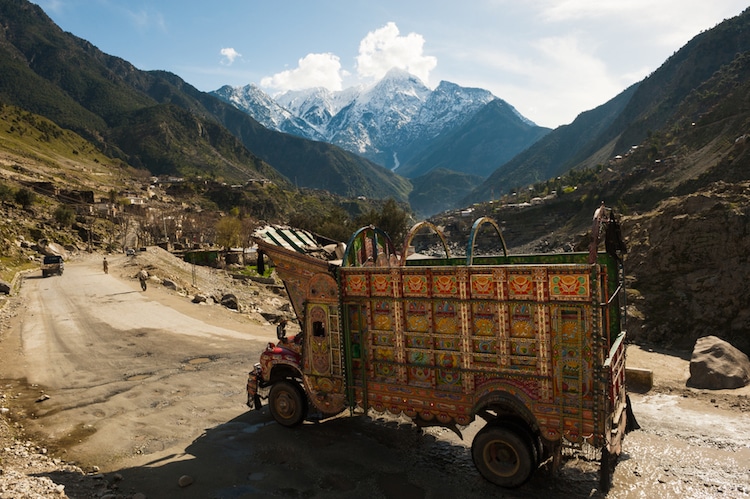 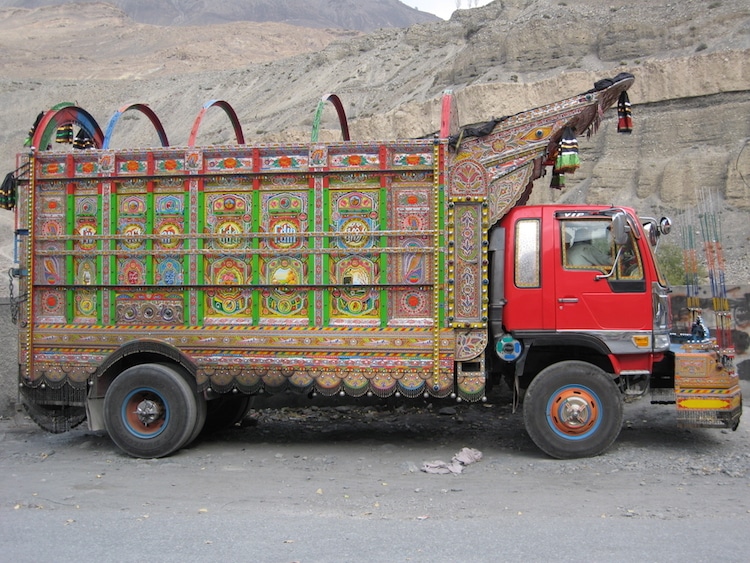 Truck art is also popular in Afganistan and India, as well as Japan and several South American countries. 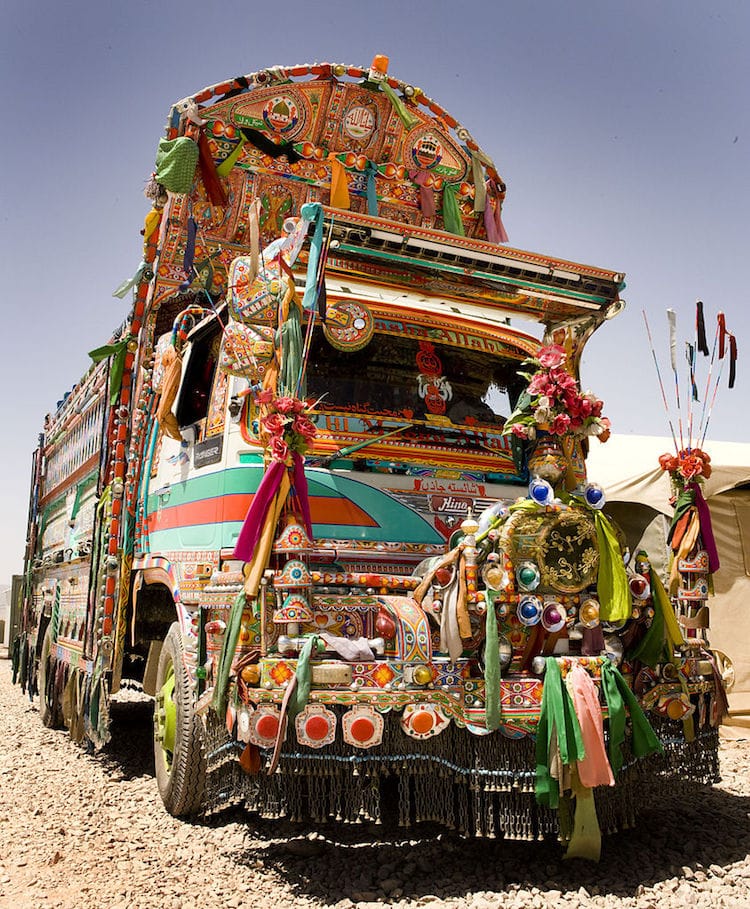 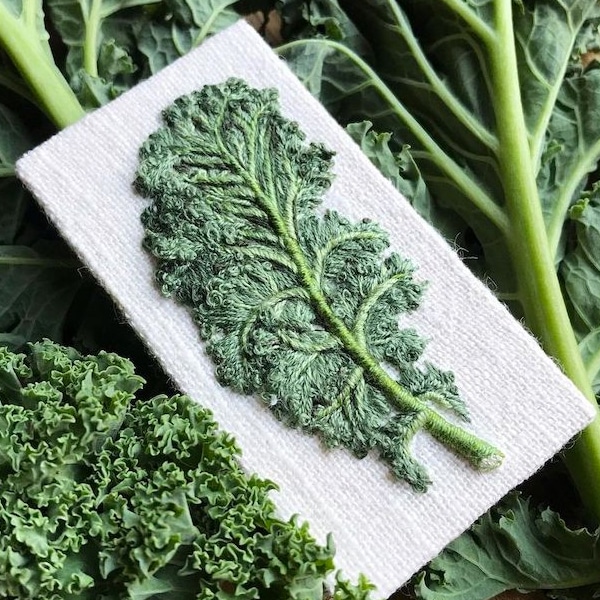