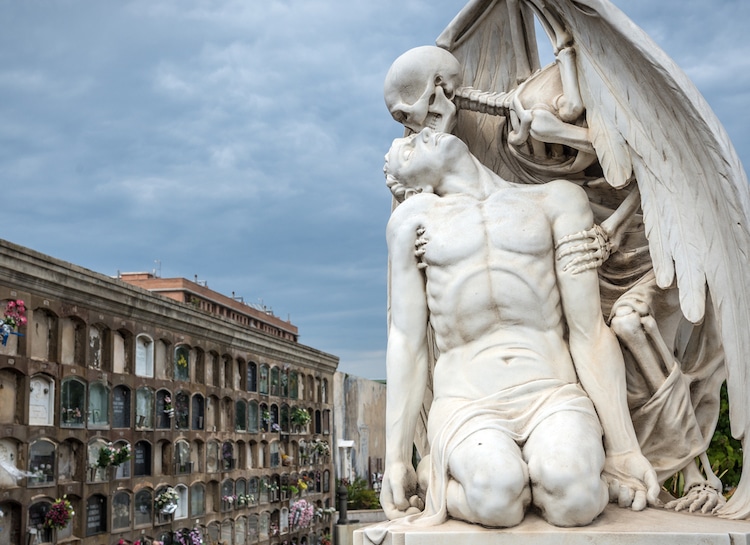 Nestled into an 18th-century cemetery in Barcelona, The Kiss of Death is a haunting sculpture used to commemorate one man's grave. The piece is located in the city's Poblenou Cemetery and is one of its most iconic tombs. The statue is not only impressive for the fine carving and the sculptor's ability to render texture, but also for the tender way in which it embraces death.

Also known as El petó de la mort in Catalan and El beso de la muerte in Spanish, the marble sculpture is a fine example of modern memento mori art. Memento mori, which translates to “remember that you will die,” has a long tradition in the history of art. Rather than viewing death as something to be feared, memento mori embraces the immortality of the soul and the afterlife. The Kiss of Death fits the concept perfectly. Here, death is in the guise of a winged skeleton that gently holds on to a dying man and lays a kiss on his cheek.

This moving idea follows a long tradition of classical sculpture, even though the sculpture itself is from the 20th century. The sculpture was created in 1930 for the tomb of textile manufacturer Josep Llaudet Soler, which is inscribed with a verse by celebrated Catalan poet Jacinto Verdaguer. The epitaph reads: “His young heart is thus extinguished. The blood in his veins grows cold. And all strength has gone. Faith has been extolled by his fall into the arms of death. Amen.” 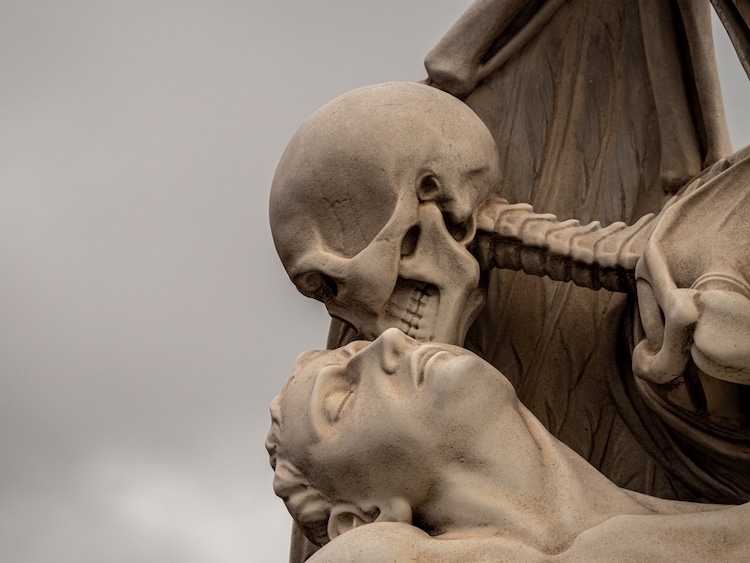 Though his exact birthdate is unknown, it is believed that Soler died at a young age, which prompted his family to commission the statue. It surely would have brought comfort to the family to imagine that Soler embraced, rather than feared, his death and that he passed in a peaceful manner. The emotion it stirs is one of the many reasons that the sculpture has continued to attract visitors for nearly 100 years.

But even beyond the concept, The Kiss of Death is heralded for the masterful way in which it's sculpted. It's believed to have been created by Jaume Barba, whose name is carved into the base, though some attribute the design to Joan Fontbernat. In the tradition of Bernini's supple marble sculptures and Giovanni Strazza's The Veiled Virgin, the statue is a masterful display of texture. The hard bones of the skeleton stand in juxtaposition to the young man's toned body. The skeleton's bony fingers sink into the man's soft flesh in a manner that reminds viewers of the human body's circle of life.

A visit to Pobleneou Cemetery is worthwhile, not only to view The Kiss of Death, but also to take in some of its other fine tomb sculptures. The cemetery's monumental graves harken back to a time when Barcelona's bourgeoisie went to great lengths to celebrate their loved ones. And recently, the city has taken steps to keep the site on the mind's of travelers thanks to a cemetery route and an Android app that explains some of Poblenou's greatest tombs—including The Kiss of Death.

The Kiss of Death is a tomb sculpture located in Barcelona's Poblenou Cemetery. 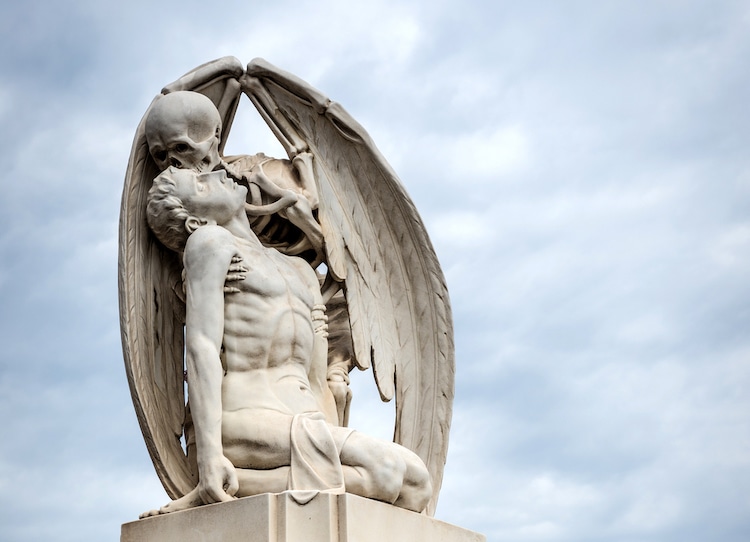 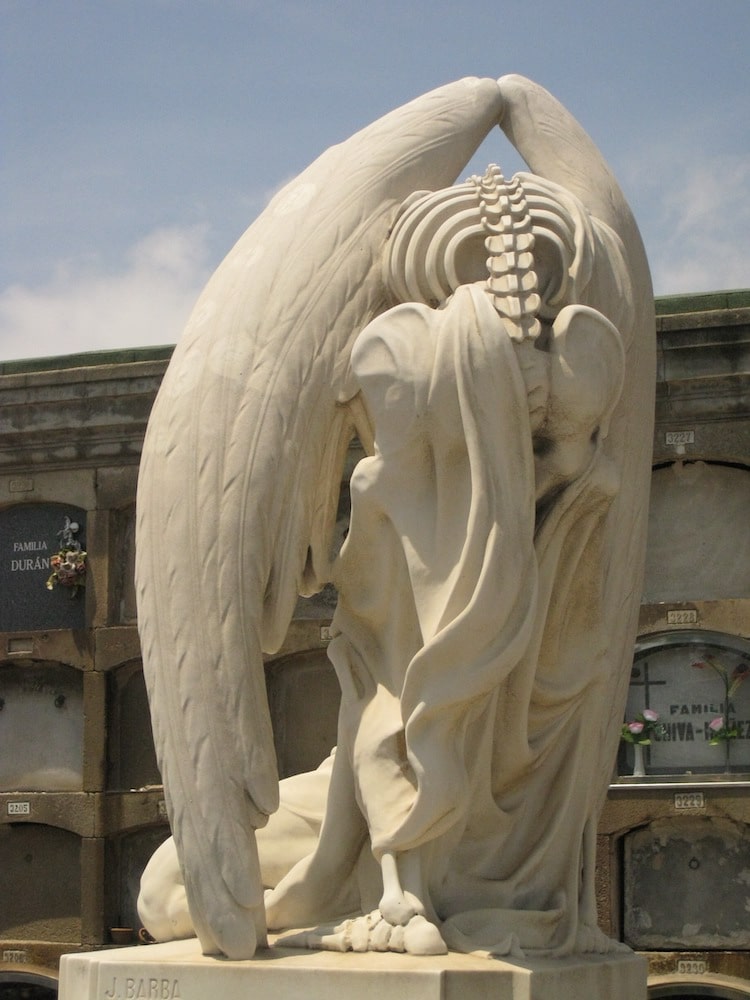 The haunting marble sculpture is the cemetery's most well-known piece of art. 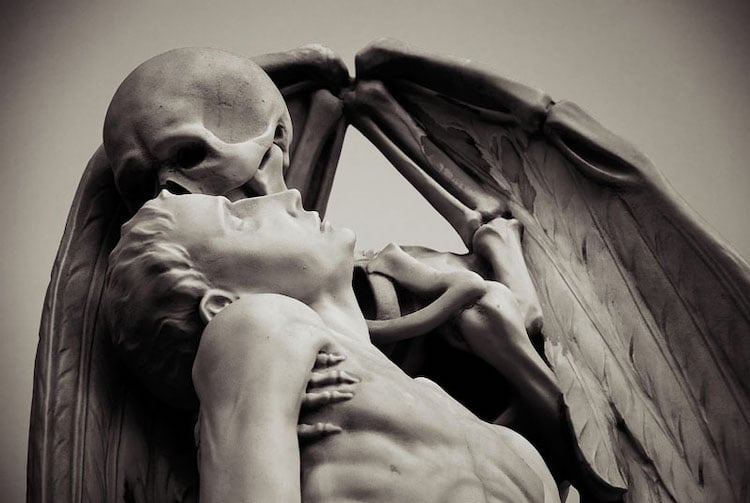 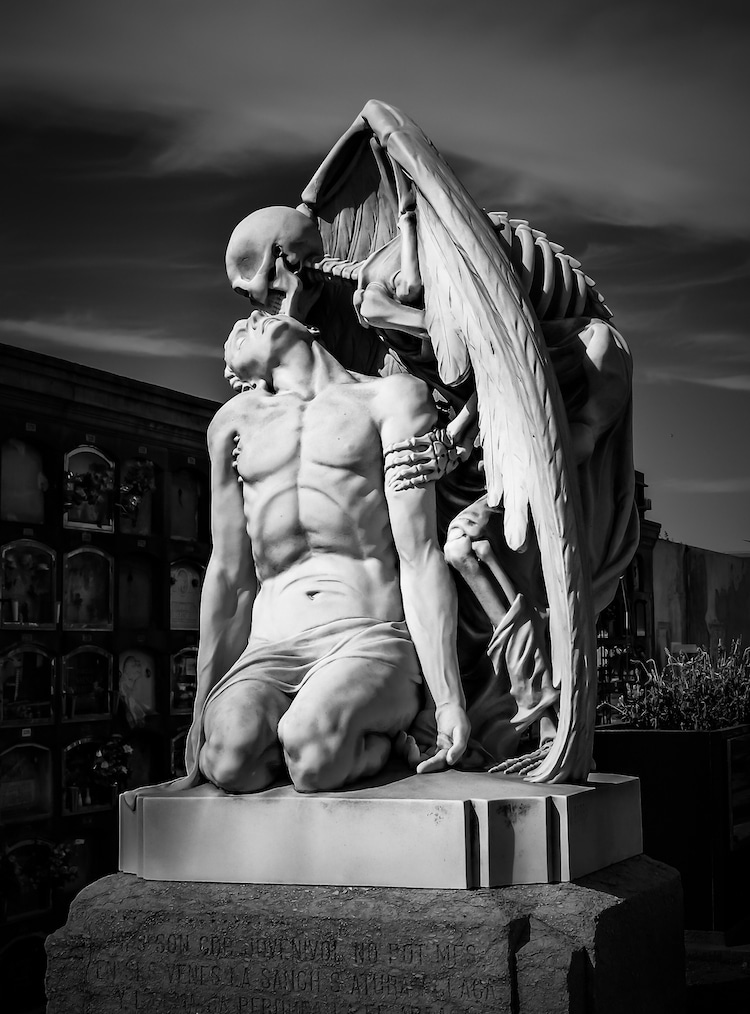 Giant Buddha Is Surrounded With Harmonious Mound of 150,000 Lavender Plants