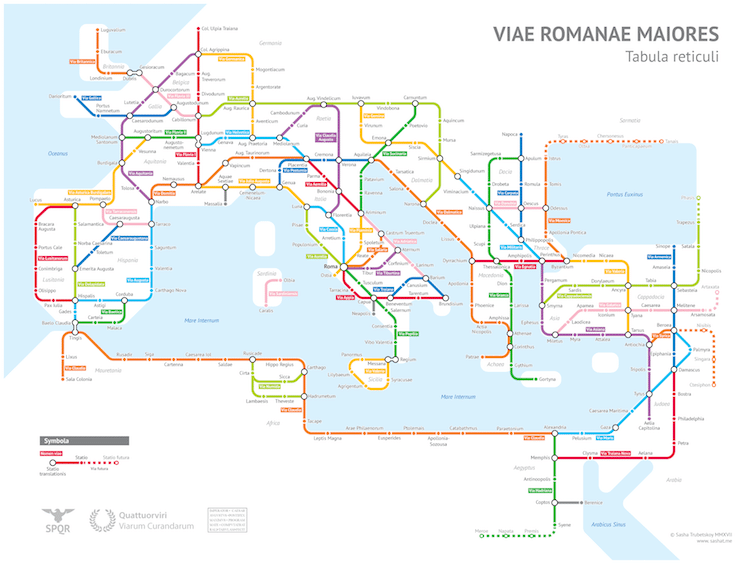 They say that “all roads lead to Rome,” and self-proclaimed “geography and data nerd” Sasha Trubetskoy is making the case with his clever map showing the streets of ancient Rome as subway lines.

At the peak of the Ancient Empire, Romans had built over 250,000 miles of roads stretching across their vast lands. They even had a set of ancient highways that radiated out from the capital, which allowed for efficient commercial and military movement. Trubetskoy, who is a student at the University of Chicago studying statistics, transformed this complex web of roads into a neat, legible subway map.

Trubetskoy focused on the Roman Empire in 125 AD, sticking to main roads and taking a few creative liberties, such as only including certain sections of select streets or naming a few after the Emperors who built them. All told, his work is a fun way to visualize the power of Ancient Rome. It's incredible to imagine the manpower necessary to create such a powerful transit network, some of which—like the Via Appia in Rome—still exist.

Click here to see a large version and if you want a version of the map for yourself, for a small fee Trubetskoy will send a high-resolution, printable PDF direct to your inbox.

At its peak, the Roman Empire had over 250,000 miles of roads. The main streets have now been translated into a subway style map.

All images via Sasha Trubetskoy.